A thrum of excitement and chatter spreads onboard the Sicilia.

We’ve caught wind that the spotter pilot, employed to improve the skipper’s odds of finding wildlife whilst on tour, has found a baitball. I’m grinning from ear to ear and once again struggling to come to terms with the fact that this is my job and I’m about to photograph the most electrifying thing one can possibly experience in the ocean.

I was lucky enough to work as an underwater photographer for a season on the Ningaloo Reef last year. Located approximately halfway up the coast of Western Australia, this almost 300km long fringing reef is sandwiched between the desolate scrub of the Pilbara and the deep plankton-rich waters of the continental shelf. Ningaloo is an Aboriginal word meaning deep water, and it’s this – combined with its calm shallow bays – that make it one of the best places in the world for photographing marine megafauna.

The skipper gives the call for us to start getting ready – we must be approaching the baitball. I grab my mask and fins, strap my weight belt around my waist and give my camera housing the final once over to check for leaks before taking the plunge. The intoxicating anticipation of what’s to come surges over me as I turn my camera on and do my best to predict the settings needed once I’m in the water. 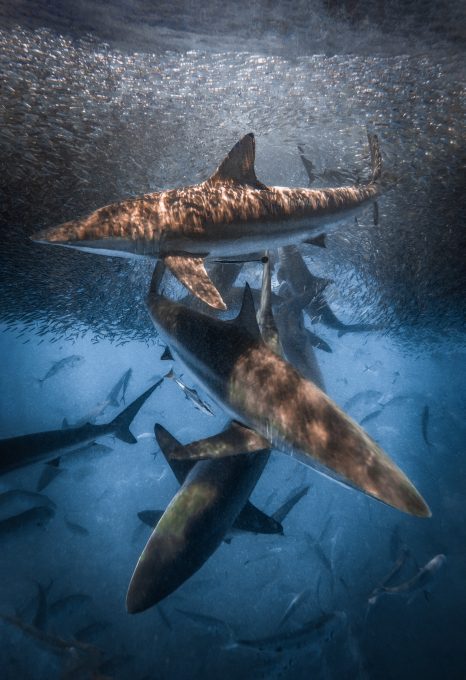 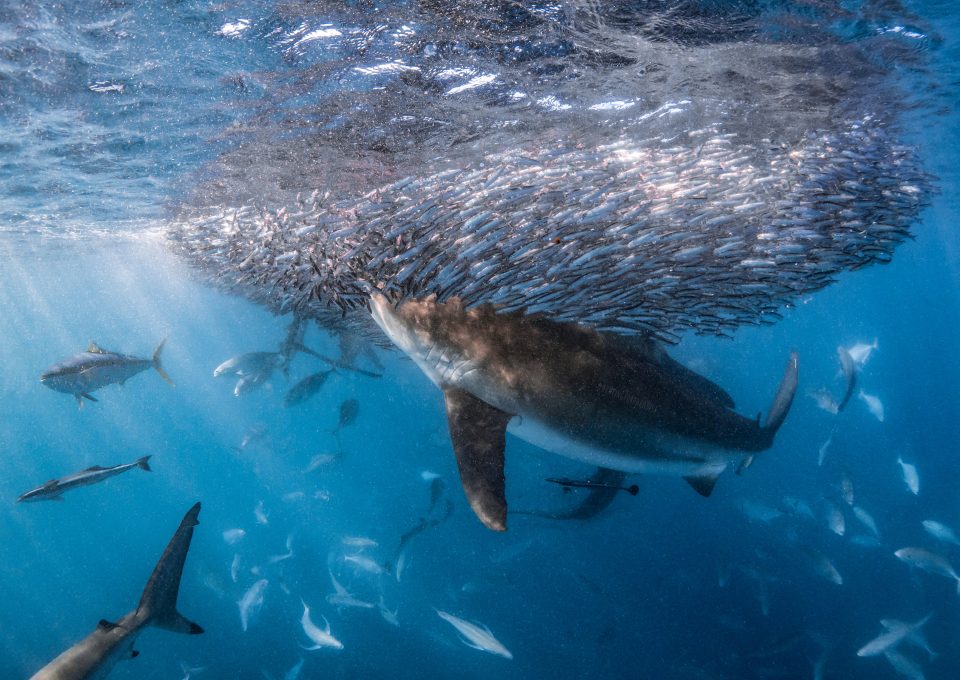 As we near the epicentre of the action, the skipper cuts the engines and gives me the all clear to quietly enter the water. With the crew onboard pointing in the direction of the action I start to swim towards the writhing mass of life, bubbling and splashing at the surface. As I approach the baitball, the first thing I notice are the glittering scales of not-so-lucky baitfish, shimmering as they slowly make their way down through the water column, the only thing that remains of the madness that unfolded just minutes prior. A couple of large trevally and tuna dart through the glinting scales sucking up any last remains of half-chewed fish. Perplexed, I look back to the boat only to see the skipper and crew forming a big cross with their arms, the industry signal for ‘its over, get back on the boat’. Once back on board we discover that the baitball has reformed just a couple of hundred metres to the south of us so we motor over and try again for round two.

This time we hit the jackpot. As the boat nears we can see the fins of the sharks at the surface, thrashing over each other to get to the small, tightly packed anchovies. As the onboard photographer, it was my job to assess the baitball situation in the water and then give the all clear for guests to hop in. It was those lucky minutes that I woke up for each morning, the narcotic tingle of witnessing sharks the size of small sofas smash through a shimmering murmuration of baitfish, witnessing the food chain in action.

Perhaps the most bizarre thing about witnessing such a spectacular event of nature was the profound lack of noise. Above the water you’ve got a plethora of different seabirds squawking and dive bombing out of the air into the mass of fish below but as soon as you stick your head beneath the water, it goes all but quiet. There are the usual sounds of the sea and the occasional splashes from sharks on the surface, but mostly the chaos unfolds with a bizarre sense of peace.

I notice the glittering scales of not-so-lucky baitfish, shimmering as they slowly make their way down through the water column. 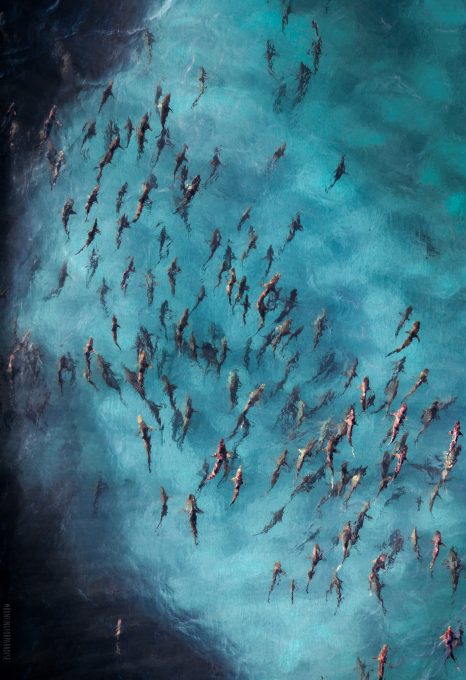 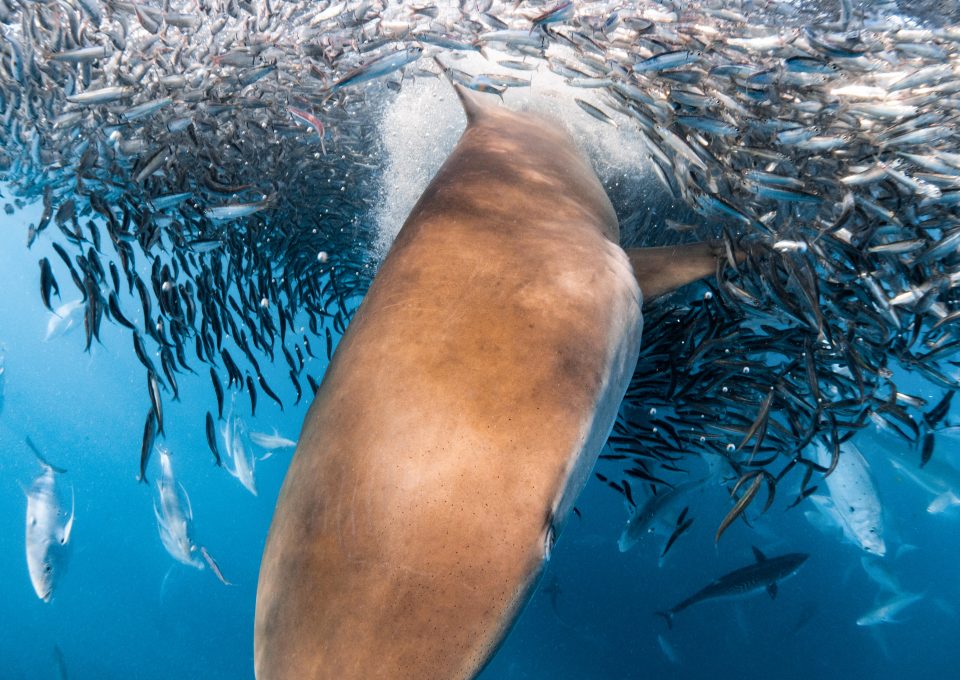 mostly the chaos unfolds with a bizarre sense of peace.

Photographing a baitball is a bit like what I would imagine photographing a riot to be like – entirely disorganised and just pure luck if you end up in the right place at the right time. There’s so much happening at once it’s hard to keep track of what’s going on, so simple things like lighting and composition have to become instinctual as soon as you’re amongst the frenzy. I would often film during my initial approach towards a feeding event due to the unpredictability of their duration, and then switch to taking photos once I could be sure that the action would continue.

The tuna work together in a team to tear through the baitball one after another, their persistence and speed matched only by that of the remaining anchovies, all swimming wildly together in the hope that the frenzy would end soon. The sharks seem to be slightly more composed, taking their time to circle around the baitball, often disappearing into it before reappearing suddenly with a burst of speed, shattering the tightly packed fish like a pane of glass, mouths wide open.

For all that we hear about sharks being vicious and mindless killing machines, moments like this prove otherwise. They are entirely aware of my presence in the feeding frenzy but often stop feeding and retreat to a safer distance if I get too close. To me, sharks are similar to untamed dogs – undoubtedly dangerous but also unfazed by our presence, so long as we keep our distance. Every now and then, a larger and more boisterous species will try to bully you away from the scene. Viewing you as competition for the food they often smash into your legs as they swim past. Remaining aware that this behaviour serves as a warning to stay away from their food source, it makes for some pretty phenomenal photography.

Finding baitballs on the Ningaloo can be a fickle pursuit. It’s not as predictable as the South Africa sardine run nor as large, so often it would be a random call on the radio whilst out looking for whale sharks or humpbacks to swim with that would alert us to their presence. Other times they were visible from the boat, with large flocks of different seabirds all gathering over a random patch of ocean, it’s obvious what lays below. I think that’s what made them so exciting to photograph. It was the unknown of each day on the water up there, the chance of stumbling across this magnificent feast that made the waters of the Ningaloo so much more alluring.

mostly the chaos unfolds with a bizarre sense of peace.