“Conservation can work for both biodiversity and for people.”

On a remote island in Indonesia, rangers are turning the tide on turtle egg poaching, safeguarding the future of an ancient population of greens and leatherbacks. In Issue 16 of Oceanographic, Jane Dunlop and Tom Amey share the story so far.

We set off from the ranger camp after eating dinner. Although it was well into the night, the walk through Bangkaru’s forest is a sweaty business. During the day, the trees provide welcome shade, but at night they seem to breathe out warm moist air. This humid tropic climate and pristine primary forest means Bangkaru is home to an abundance of frogs and insects that, when night comes, produce a cacophony of orchestral proportion.

After a 30-minute torchlit trek, we stepped out from the forest onto the beach. Lightning flashed over the sea in front and over the mountains behind, illuminating rock formations and trees, and casting dramatic flashing shadows over the pure white moonlit sand.

The ranger patrols are a serious business. We were given a briefing from the lead ranger: “I will go ahead and scope the beach, stay at least 50 metres behind me. If I see something, I will give you the flash signal with my red light. Stop and wait for a second flash and approach slowly with the rangers. There is to be no use of phones or lights except your red head torch.” Turtles are very sensitive to light and may choose not to approach the beach if they see any lights. Red light isn’t visible to them and is therefore used to minimise disturbance.

Bangkaru is home to an abundance of frogs and insects that, when night comes, produce a cacophony of orchestral proportion. 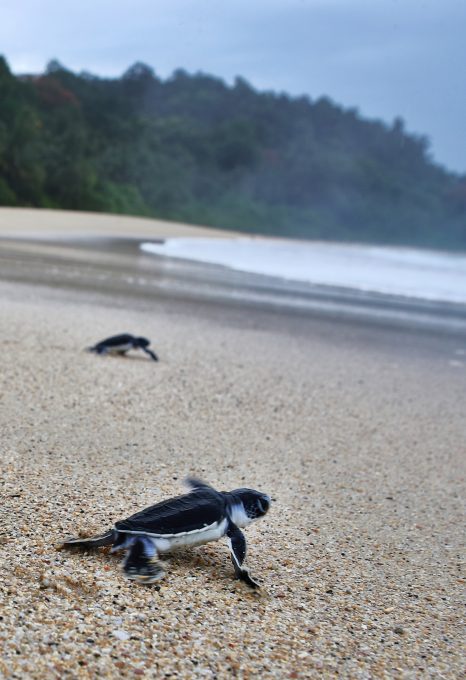 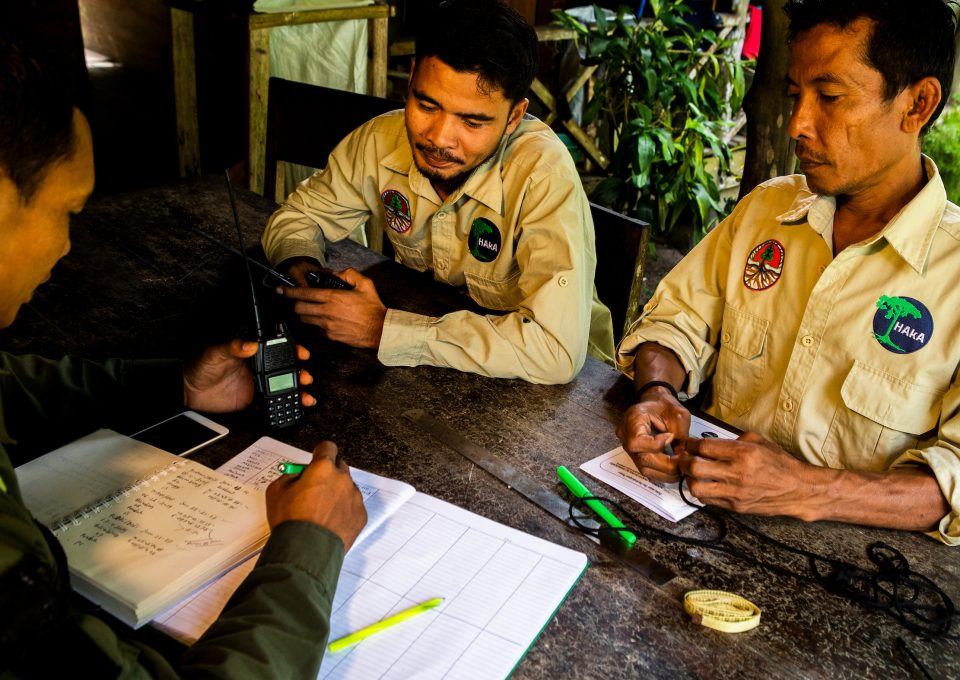 Huddling together we waited for the ranger to make his way up the beach. After being given the all clear, we followed. Stomping along the shore, electric blue specks in the sand danced and shimmered as our feet disturbed bioluminescent plankton. The flashing lightning above and the twinkling sand below was quite a spectacle.

All of a sudden, a red light bobbed up and down some way ahead. A mother turtle had been spotted. She had just excavated her hole and was beginning the process of laying. In the water turtles are graceful and seem to glide effortlessly. On land it is another story. The whole process is clearly an exhausting experience of heaving, hauling, digging and flapping, and can take up to three hours from exiting to re-entering the sea.

In this instance the species was a green turtle, the most commonly found species on Bangkaru. Around a metre in length and weighing between 110–190kg, green turtles are impressive creatures. But leatherbacks – the other species that nest on Bangkaru – are real prehistoric beasts. Leatherbacks are the only remaining species of their kind and have remained relatively unchanged since sea turtles evolved more than 110 million years ago. Around two metres long and up to 700kg in weight, they really do resemble living dinosaurs.

Leatherbacks nest on the beach for approximately 40 nights a year, between October and April. Green turtles nest every night of the year. A single night can result in five to 20 nests, sometimes more. An average of 200 turtles visit the beach a month.

A chain of pristine deep-sea islands, Simeulue and Bangkaru offer one of the last refuges and nesting sites for critically endangered turtles as well as several bird species. The EcosystemImpact Foundation is working to keep these islands wild through a sustainable approach where business, people and nature are given the tools to thrive alongside each other, providing immediate solutions to urgent problems of biodiversity and habitat loss through ranger programmes, breeding programmes and habitat protection and restoration. This is all alongside long-term solutions focussing on sustainable business, sustainable financing streams and education.

Bangkaru’s beaches are home to the largest nesting site for green sea turtles in Western Indonesia, along with being an important nesting site for leatherback turtles. However, just because Bangkaru and Simeulue are remote, does not mean that the wildlife there is safe. Before the foundation started supporting the Bangkaru Ranger Programme, poachers were taking as many as 1,500 eggs a night, threatening the existence of the local sea turtle populations.

“I feel like my heart called me to get involved in protecting wildlife.” 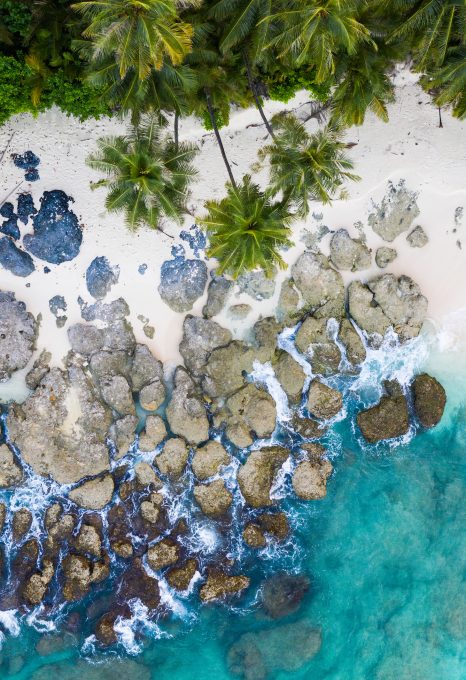 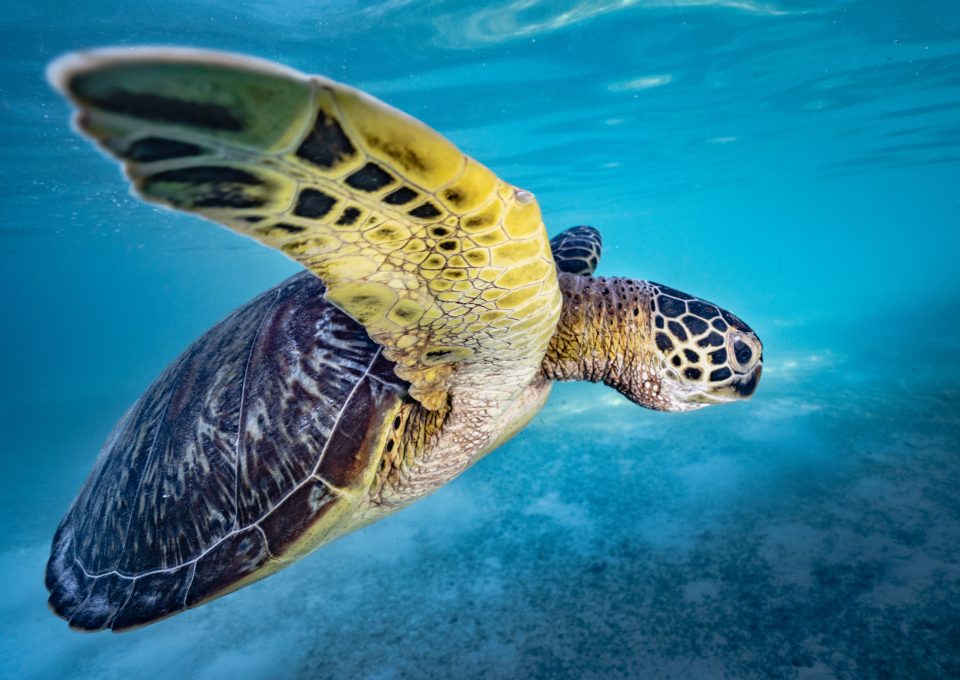 It is only after visiting such remote and wild places, that one appreciates how significant an impact humanity is having on this planet

“I have been with the programme for 13 years and before that, I was a fisher,” said Uzhar, who travels from Haloban to Bangkaru for his work. “I feel like my heart called me to get involved in protecting wildlife. However, at the start I felt like I didn’t know anything about conservation activities. The more experience I had the deeper I fell in love with this work and the more I realised that our lives are interdependent with nature. On one occasion, 25 poachers were on the shore and two people chased us with machetes. We almost retreated but decided to stand our ground, also holding machetes. They saw that their machetes were smaller than ours and retreated. The next day when we returned to the beach, all the turtle eggs were gone. Not one was left on the beach. We had this experience every day for four years.”

EcosystemImpact became involved in the Bangkaru Ranger Programme, which was originally launched by sea turtle conservation NGO Yayasan Pulau Banyak, after Luke Swainson, one of EcosystemImpact’s founders, took a trip to the island and witnessed it’s vibrancy, as well as the sheer number of turtles nesting on its beaches.

A team of six rangers now provide constant protection on Bangkaru, under the leadership and direction of Indonesia’s wildlife protection agency, BKSDA. Since their involvement began in 2016, BKSDA, EcosystemImpact and partners have reduced poaching cases to zero…

To show your much-needed support for the rangers of Bangkaru, click here.

It is only after visiting such remote and wild places, that one appreciates how significant an impact humanity is having on this planet