Call of the ocean

Call of the ocean

When the ocean calls your name, listen. It is the universe’s invitation to connect.

I was very young when I first heard the call. I may only have a few vague memories of experience the ocean in my earliest years, but I know that this has always been a medium of joy and connection. My first concrete memory of the sea has stuck with me since the age of around four years old, playing on the beach at Strand, a small town 50km from Cape Town.  It is located on the east side of the majestic False Bay and on a clear day, you can see the mountains stretching from Cape Point to Muizenberg, 35km across the bay.

It was 35 years ago when I saw those mountains for the first time. With uncontainable excitement, I felt the mystery of the bay that connected me with that other landmass.

“Is that another country?” I asked my mother.

I didn’t understand it then, but the magic of this place wasn’t across the bay, it was in the depths of its waters. To me, the sea seemed like another dimension, another universe that, with its wild yet calm energy, whispered into my soul and called me back to the waves.

I grew up loving the ocean. Whenever I had the opportunity to visit the beach I would push myself, always swimming for longer and further out than most. My adventures often resulted in frantic searches and me getting into trouble once back on the beach. When my school did swimming trials at the beginning of summer, I was identified as someone with potential and I was invited to join the squad, which I usually fully embraced for around two or three weeks. I found that the structure of squad training wasn’t for me – I missed the freedom of the ocean. I excused myself from swimming for the rest of the season and focused my efforts on playing music and figuring out my place in the world. I kept studying music at university, but soon found myself being drawn back to swimming, addicted to the water once again. I was swimming 4km per day, and I became reliant on the soothing effect of the water alongside the regular rush of endorphins. I had a “perfect stroke”, according to other swimmers and triathletes who encouraged me to compete in long distance events.

I felt the mystery of the bay that connected me with that other landmass. 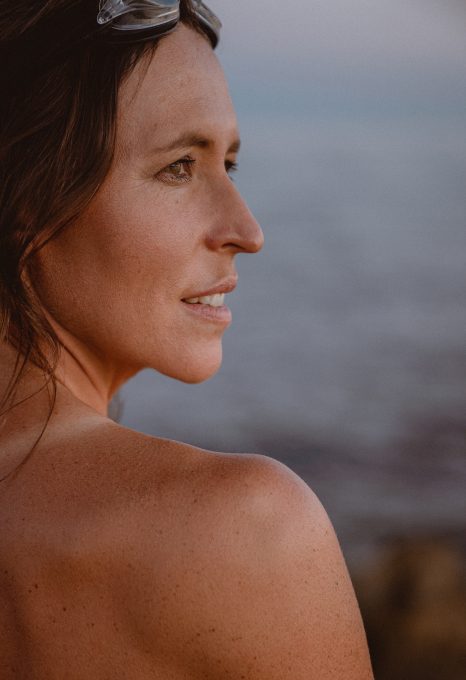 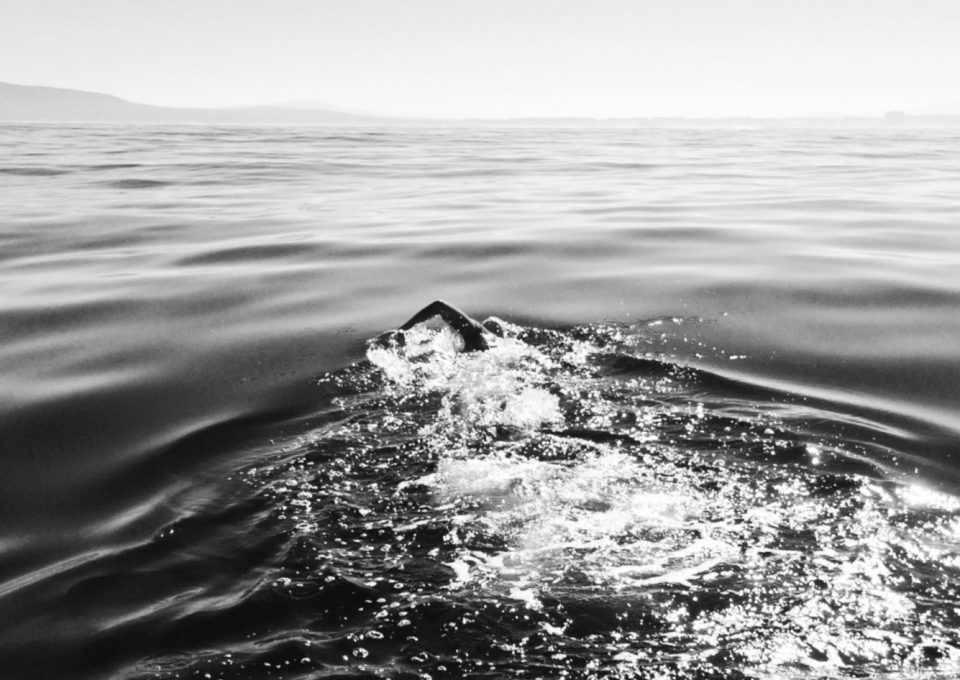 At 23, I was lead back to False Bay. I was encouraged to enter a 12km race from Simonstown to Muizenberg, both sitting along the same stretch of coastline. The distance alone sounded impossible, even without the added obstacles of cold water and a potential shark presence. Determined not to let fear get the better of me, I entered, I swam, and I was changed. Those three hours felt like both mere minutes and yet an eternity. The water felt so familiar yet equally exotic; I knew I was travelling through home, that this was my place.

I quickly became an open water swimmer, embarking on many challenges across Cape Town and around the world. I learned that in 1989, a Belgian swimmer swam 34km across False Bay, from Rooi Els Point to Miller’s Point. This made my heart swell – the place that had inspired me so many years ago was swimmable. Many others had tried to make the same crossing, but failed for various reasons including the distance, currents, wind and cold water, but probably most notably the mind – swimming across what is known as the ‘white shark capital of the world’ is not the most comfortable thought.

I had to do it; I had to go back to cross my bay. The other swims I was doing each had their own allure, but I found myself chasing records and feeling unfulfilled whether I broke the record or not, always looking for the next thrill before even completing the current one. I knew had to go back to False Bay.

I did. The first time was on a cold, foggy March day that made the water look like frosted glass. I swam from Simonstown, against a strong Agulhas current in water of 13-14 degrees Celsius (about five degrees lower than expected), in the direction of Rooi Els (Strand side). The bay was eery and beautiful. The water was the water I remembered – welcoming and energising – but it chilled me to the core. Working hard to embrace the cold-induced pain and extreme discomfort that I felt from the moment I got in, my mind went in and out of consciousness and False Bay produced some unspeakably beautiful images of both suspension and depth, light and darkness, surrender and bewitchment.

Four and a half hours into my swim, I started to feel like my freezing body was warming up, and the hallucinations increased. I was vaguely aware of three baby seals joyfully sharing my journey towards the end (though my mind turned them into cartoon sharks). Since, I’ve wondered if we were sharing similar vibrations as my reptilian brain took charge while the other parts of my consciousness dozed off. Suddenly, I woke up in the support boat with voices all around me. After five hours and 17km in False Bay I was severely hypothermic.

Four and a half hours into my swim, it felt like my frozen body was warming up as the hallucinations increased. 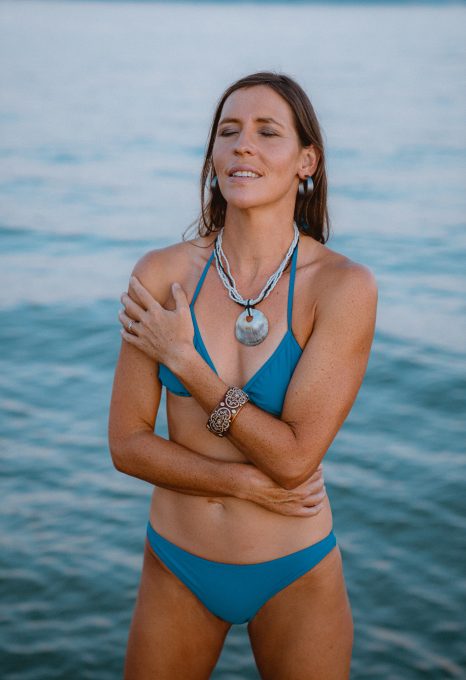 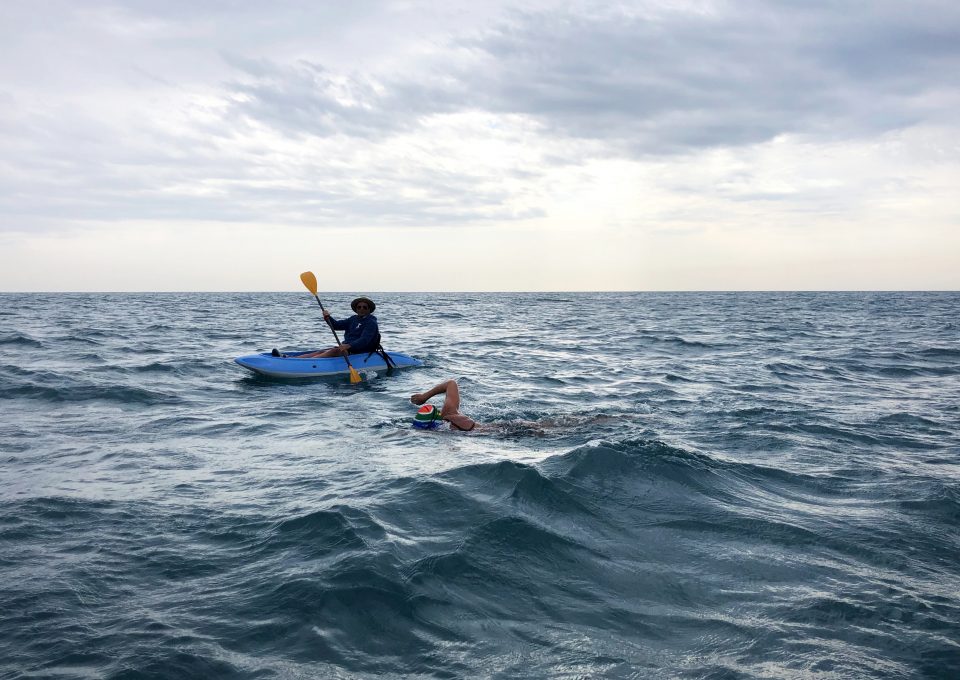 For 11 hours, the world did not exist, only the water.

On one level, this was enough. On paper it was a failed attempt, but for me, it was a pivotal home visit. On a more practical level, the experience convinced me to pick up weight for my English Channel Swim, which I was scheduled to attempt a few months later. In a more insulated state I managed the England to France crossing without much drama.  The Channel – sometimes known as the “Everest” of swimming – also offered little marvel. Yes, it is epic and hugely important from a swimming career point of view, but the chartered, often murky water made me pine for the untamed seas of False Bay, where predators play while the sun dances on the surface of the waves.

When I returned to False Bay a year later, the connection was instant. For 11 hours, the world did not exist, only the water. This time, the shifts in consciousness were not induced by hypothermia, but by a sense of sheer abandon. Swimming the bay felt like I was flying. I moved joyfully through waters that enveloped and supported both body and soul. When the sea was calm, I sensed the presence of the colonies of life whose territory I was visiting but felt protected by the bay. I felt like we had an unspoken pact. In the rougher waves, I managed to connect with the energy of the chop and the swell, and adjusted my stroke to match the rhythm of the Bay.

I suddenly saw sand. The bay was behind me and I realised I’d swum the 36km. I felt a shiver. I didn’t know what I was supposed to do once I walked onto the beach. Did False Bay spit me out or did I complete my journey? I’m still not entirely sure. But I do still hear that call to the ocean, and somehow it seems to be omnidirectional. I answer it from various oceans around the world, where somehow, I manage to tap into the magical universe of False Bay, to which I will always return.

Carina Bruwer is South African musician, marathon swimmer and Outdoor Swimming Society 2019 Champ. in 2006, she was the first SA woman and the third person ever to swim across False Bay. She held the ‘around Robben Island’ swim record for eight years and completed an 18km swim from Spain’s Tabarca Island to Alicante earlier this year.

For 11 hours, the world did not exist, only the water.