The island of lost penguins

The island of lost penguins

In January 2020, a hardy crew of environmental activists and penguin scientists – including me – took a ship from Argentina straight south, across the infamous Drake Passage, to an Antarctic outpost called Elephant Island.

I’d seized a rare opportunity, for my graduate research at Stony Brook University, to visit the island’s far-flung penguin colonies. As part of its Protect the Oceans campaign, Greenpeace International hosted our team of scientists on its ice-class research ship, the M/Y Esperanza. Powered by a hybrid electric engine and excellent vegetarian food, we set off to study penguins in places most other expeditions couldn’t go.

If Elephant Island rings a bell, it’s because it played a fleeting role in a desperate episode of Antarctic history. About a century ago, polar explorer Ernest Shackleton washed up here with 27 men after their wooden sailing ship was crushed by ice in the Weddell Sea. Most of the group hunkered under their upturned lifeboat on a forlorn, frozen beach for months, eating raw penguins and seals, amputating each other’s miserably frostbitten toes, while Shackleton and a few men made a legendary open-boat crossing to South Georgia and eventually returned with a rescue ship. It’s a timeless tale of leadership and survival against all odds.

But Antarctica’s age of heroic exploration has passed, and today the only trace of Shackleton’s adventure on Elephant Island is a bronze statue of the Chilean captain who picked up the crew. The island is desolate and seldom visited. On this 29-mile-long outcrop of rock and glacier, surrounded by the brooding Southern Ocean, it’s easy to feel that nothing at all has changed in the past hundred years.

But things are changing down here. According to NASA data, midwinter temperatures around the Antarctic Peninsula have spiked by nearly 5°C in the past five decades, ranking this region among the fastest-warming areas on Earth. The physical effects are about what you’d expect: Ice shelves spectacularly shattered, glaciers retreated, and sea ice dwindled. Shackleton could never have predicted that people following in his footsteps would worry far less about personal safety and far more about Antarctica itself falling apart.

Those two species are outnumbered by the unassuming chinstrap, which lives around the Antarctic Peninsula and neighbouring islands. 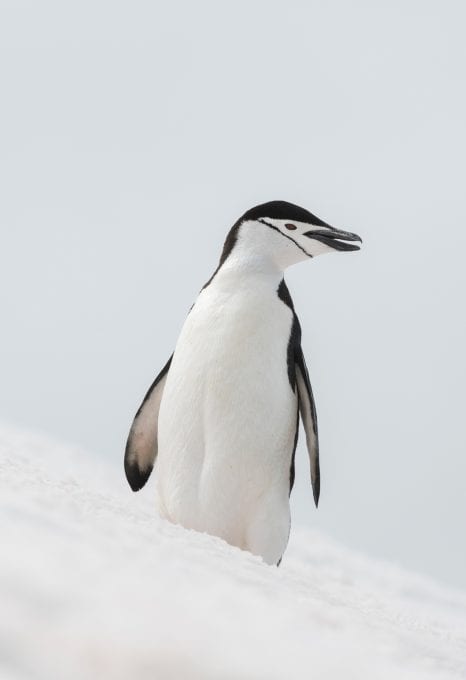 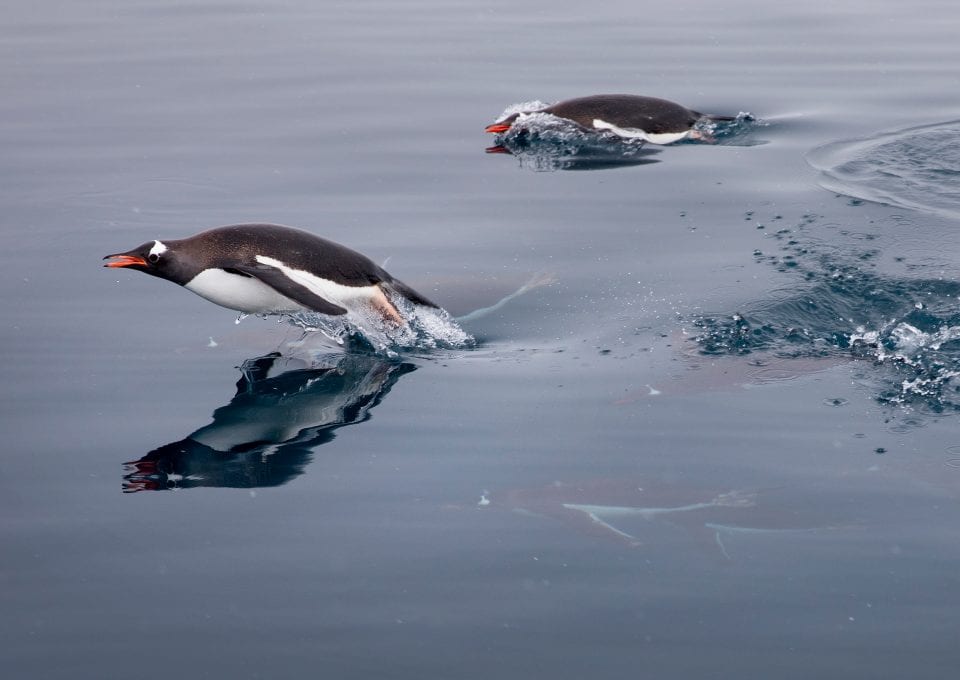 My thoughts snapped to attention as surf broke over our scientific team’s inflatable boat. As we splashed onto a beach of guano-slicked rocks, I understood immediately why penguins often seem to be walking on banana peels. In my pockets were things that would have boggled early explorers: a GPS unit, a digital camera, a cell phone connected to ship-to-shore Wi-Fi, and a Clif bar. Nearby, a curious party of penguins assembled.

The most abundant penguin in Antarctica isn’t the suave Emperor, star of March of the Penguins and Happy Feet, nor is it the punky Adélie of the movie, Penguins. Those two species are outnumbered by the unassuming chinstrap, which lives around the Antarctic Peninsula and neighbouring islands, including Elephant Island. Chinstraps resemble tuxedo-wearing bowling pins and they wobble as they walk, with their namesake cinched-on helmets giving a sporty, out-for-a-bike-ride look. Several chinstraps probed delicately at my insulated ski pants, perhaps their first human encounter.

Chinstrap penguins insist on nesting along particularly exposed, remote, and rocky coastlines, where they cluster in metropolises of up to a million inhabitants for a few intense months each year. Some penguin cities are so inaccessible that people haven’t visited them in this millennium. Others are only known from satellite imagery. So we don’t have a firm idea of how many chinstrap penguins are out there, or how they’re coping with a warming climate. Until this year, Elephant Island’s 32 separate chinstrap colonies had only been thoroughly surveyed once, during a British research expedition in 1970.

Because chinstrap penguins represent perhaps half of all avian biomass in this region, and occupy a key niche in the marine food web, they are particularly important ecologically. Counting chinstraps helps us quantify the overall health of the complex Southern Ocean ecosystem. And, because they return year after year to the same colonies, they are relatively easy to count – assuming you can get there. Like the proverbial canary in a coal mine, chinstrap populations can warn us if something is broken. 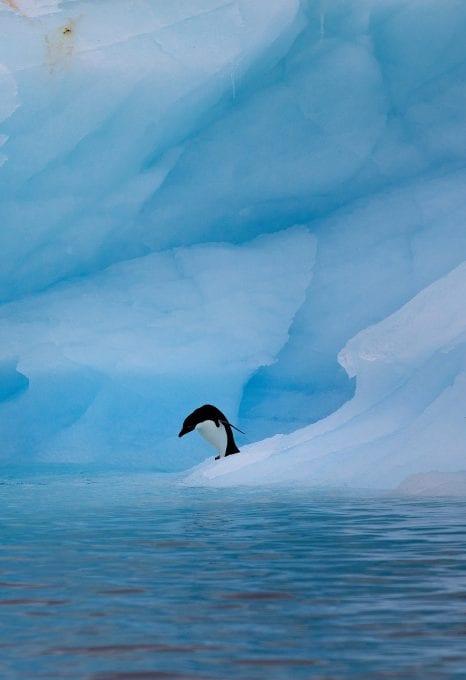 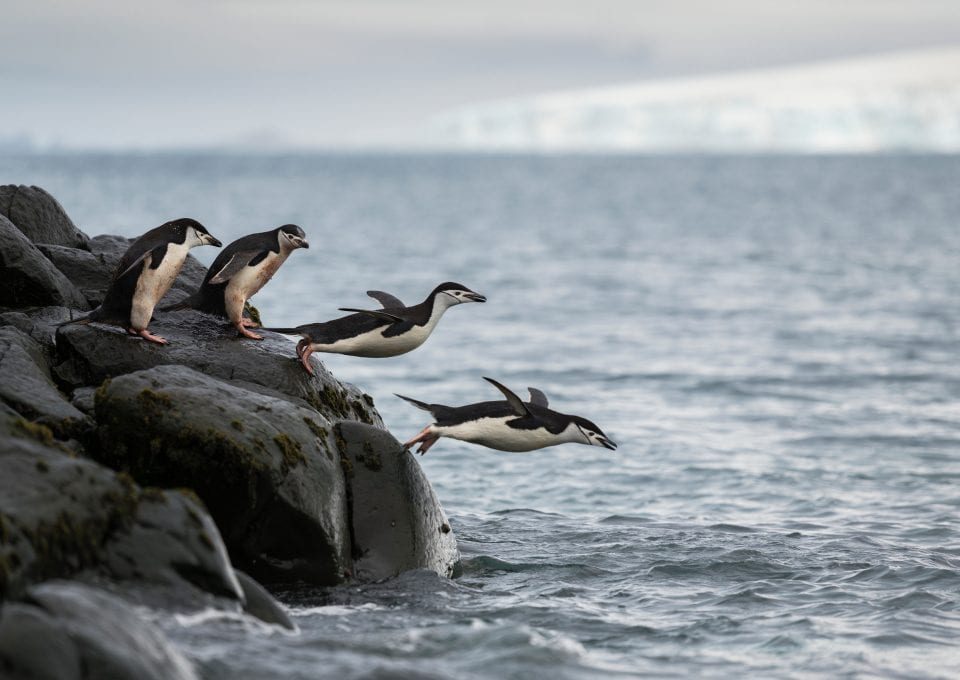 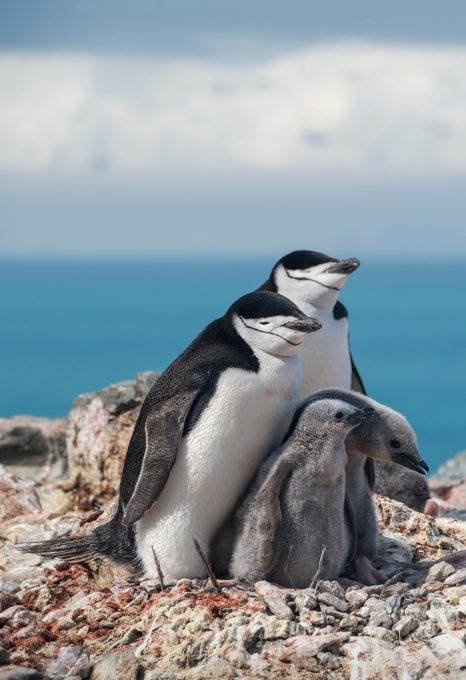 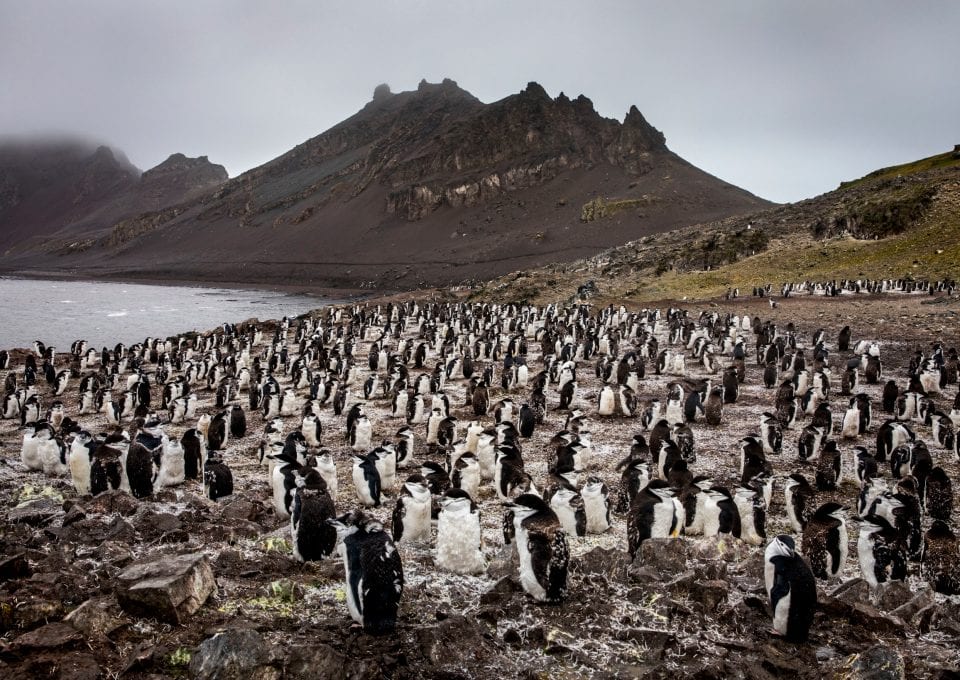 As I wandered up the beach with a gaggle of chinstraps in my wake, another member of our team opened a plastic case. With a few deft movements, he snapped together a lightweight camera drone and launched it skyward, using an iPad screen as viewfinder and controller.

What a view! Looking down from above, this penguin colony looked like pink swirls on a monochromatic canvas of rock and snow. The guano colour comes from digested krill, a chinstrap’s favourite food, squirted in concentric layers around each nest. Individual penguins looked like thousands of sprinkles on a frosted cake. The colony stretched across a hillside and ended near a crevassed glacier where ice blocks the size of hotels readied themselves to plummet into the sea.

The drone gave perspective, but nothing can replace boots on the ice for surveying penguins. Four of us spread through the colony, clickers and field notebooks in hand, aiming to tally every nest. An experienced observer can count 1,000 penguin nests per hour; the global chinstrap population is roughly estimated at eight million. By censusing Elephant Island, in the core of the Chinstrap’s range, our goal was to make an accurate before-and-after comparison. With the 1970 census as a baseline, we would see if the numbers have changed in the past 50 years.

I climbed onto a boulder overlooking a throng of penguins, like a conductor facing an orchestra, and took in the view. Each chinstrap nest was a bowl of loose stones with one or two fuzzy chicks guarded by attentive parents. Male and female penguins look alike, raise their chicks together, and usually mate for multiple years. The nests were evenly spaced, barely pecking distance from each other. I set my clicker to zero and started counting.

I climbed onto a boulder overlooking a throng of penguins, like a conductor facing an orchestra, and took in the view. 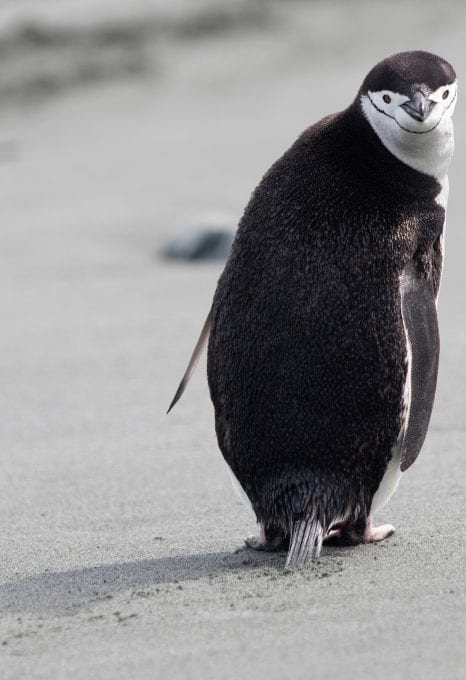 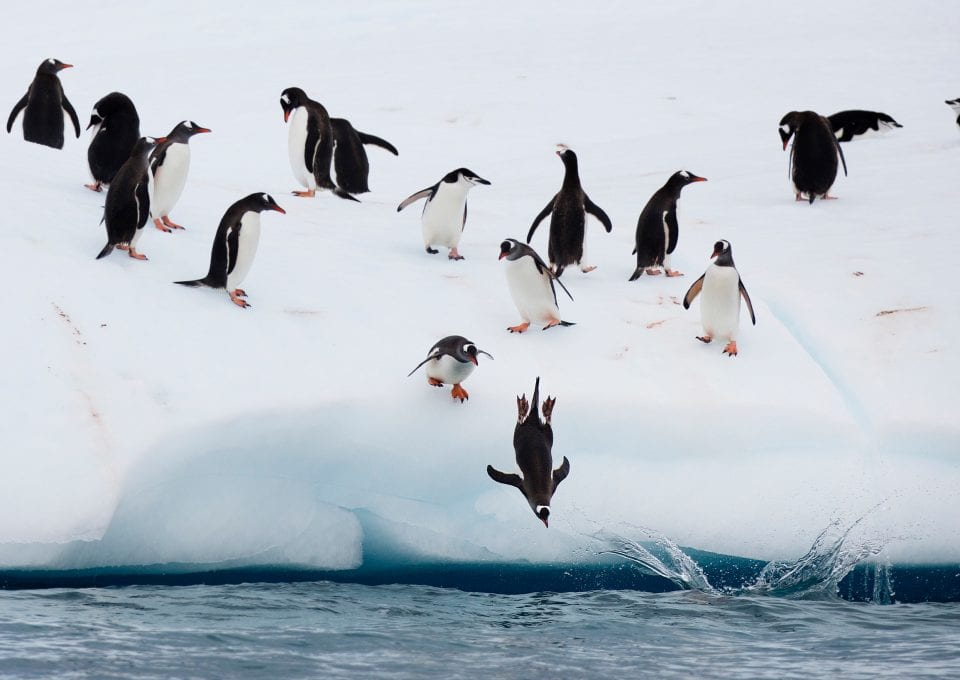 What does the future hold for the chinstraps?

Over the next two weeks, our team surveyed more than 98% of Elephant Island’s penguin population, missing only a couple tiny colonies when the island’s notoriously stormy weather kept us on the ship.

When we ran out of penguins to count, we tallied up the results. We anticipated bad news, but it was worse than we imagined. Virtually every colony had shrunk since 1970. The largest colony, at a place called Chinstrap Camp, contracted from about 25,000 nests to about 7,000. Overall, we found an island-wide population drop of more than 50% a staggering change within just a couple of penguin generations.

The declining chinstrap trend mirrors that of the relatively well-studied Adélie, a krill specialist like the chinstrap. As things warm up, ice conditions change, and krill – which depends on sea ice for part of its life cycle – may be feeling the effects. At the same time, fur seals and whales, which were decimated around Antarctica in the 1800s and early 1900s, have rebounded to compete with penguins for krill. Commercial fisheries are also targeting krill swarms with fleets of high-tech trawlers, increasing the competition.

Chinstraps are not endangered – the IUCN lists the species as “Least Concern” – but their population changes help us look into the future of Antarctica. While chinstraps have declined, another penguin species, the gentoo, has rapidly increased on the Antarctic Peninsula and Elephant Island. The gentoo penguin is more flexible, and it is adapting to ice-free conditions. Gentoos happily nest on the sandy beaches of the Falkland Islands, looking like so many tourists in Hawaii – and they’re fine with fish when krill isn’t available. A warmer Antarctica will favour adaptable species like the gentoo over specialists like the chinstrap.

It’s poignant that climate changes in Antarctica affecting penguins have arisen, at least in part, from human activities thousands of miles away. What does the future hold for the chinstraps? I’m reminded of a favourite cartoon, showing a penguin and its chick gazing into a vast white void.

“One day,” says the penguin, “all this will be yours.”

What does the future hold for the chinstraps?