‘Like cities floating on the sea’ – industrial fishing is plundering our oceans.

The only sounds I remember that night were the steady repetition of our crew member’s voice calling out on the radio, “Fu Yuan Yu, Fu Yuan Yu, this is Arctic Sunrise”, and later the sound of a warning horn blowing loudly as we got close to a nautical mile away.  Waiting until nightfall, the captain Fernando Romo had maneuvered our ship, the Arctic Sunrise, closer to the fleet we’d been trying to contact via radio. The atmosphere on the bridge, where the ship is controlled, was quite tense.

In the middle of the Indian Ocean, miles from land, in the dead of night and days since we’d last seen a ship, we found ourselves on the edge of what looked like a city on the high seas. Bright white, green and yellow lights were illuminating the black night and showing up clouds on the horizon. My first thought was it looked like spaceships had landed on the ocean, but these were the Chinese squid fishing boats that Greenpeace’s investigators had been looking for.

Miles from land, we found ourselves on the edge of what looked like a city on the high seas. 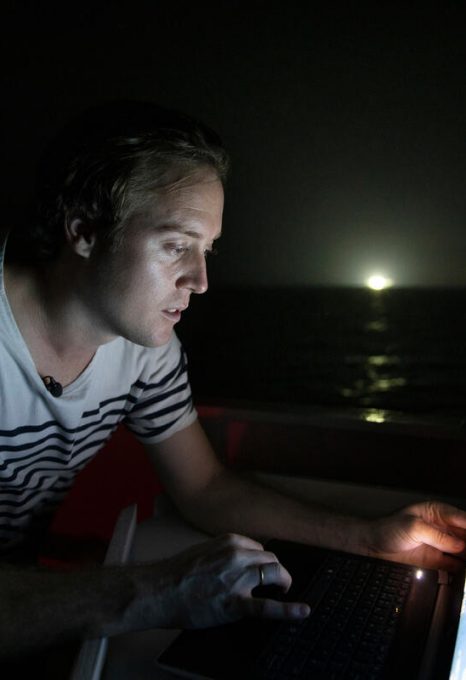 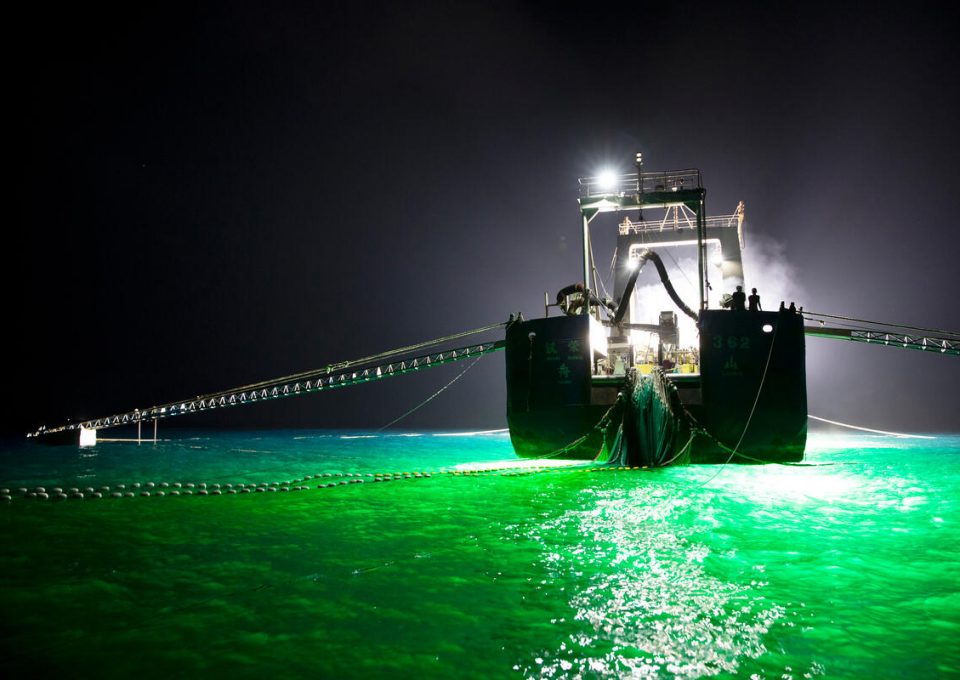 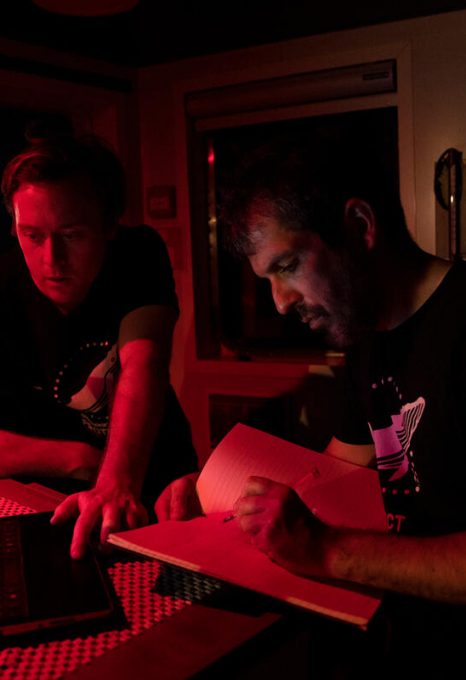 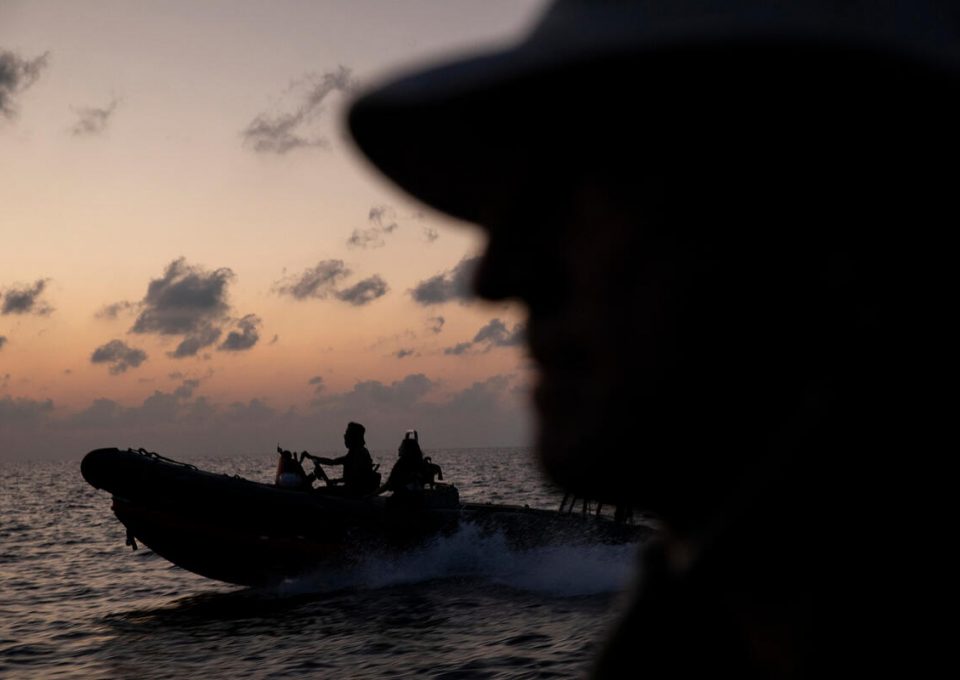 The crew was on alert as we sailed across a high-risk area for piracy near Yemen. You can easily forget that things such as piracy exist outside movies, but it was yet another reminder that our oceans are a wild west. Right now, we weren’t hiding from pirates, but searching our radar for Chinese squid fishing fleets. They’ve been operating in the Indian Ocean for the last few years, but it is surprising how little is known about them, so none of us knew what to expect.

I’ve documented personal and public traumas: wars, tsunamis, people seeking asylum, but the lawless ocean was unknown to me. As a photographer, I try to embrace the private aspects of people’s lives and see what’s under their skin, but that night, in the middle of the vast ocean, I realised that the destruction is far wider than our minds can even imagine.

What we saw were vessels with blinding lights, bright enough to light a Hollywood studio. But as we approached, the squid fishing boats turned off their lights and sailed away, running away from us. The scale was phenomenal, both the size of the vessels and the number of them. Using satellite systems, we counted 140 of them and over the course of the next few nights we’d see more than 20 different lights at any one time scattered across the horizon. Some of these boats were 40 or 50 miles away and we could still pick them out one by one. As the day broke, it began to feel like a game of chase; when we approached, they would warn us not to get too close with angry horns.

It was yet another reminder that our oceans are a wild west. 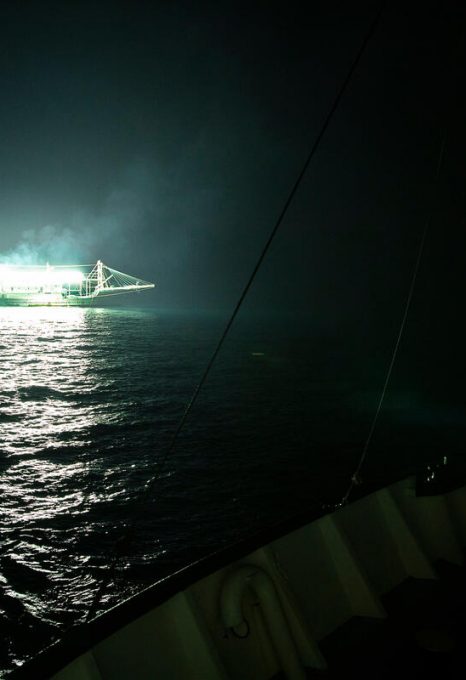 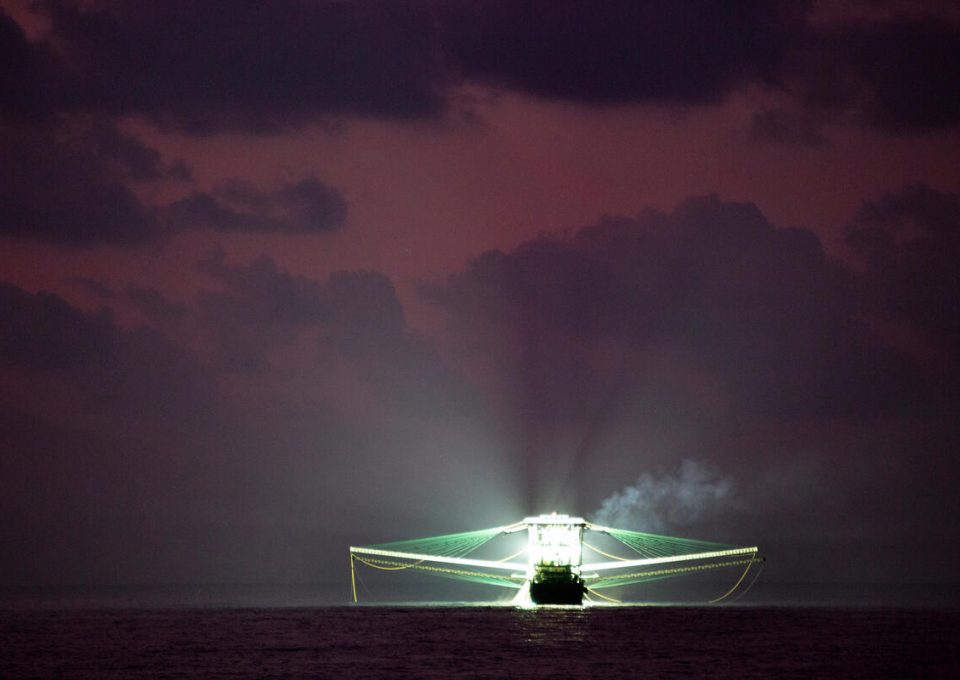 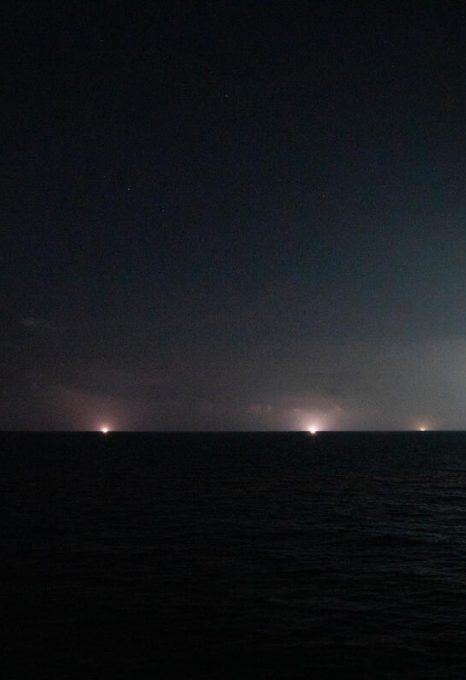 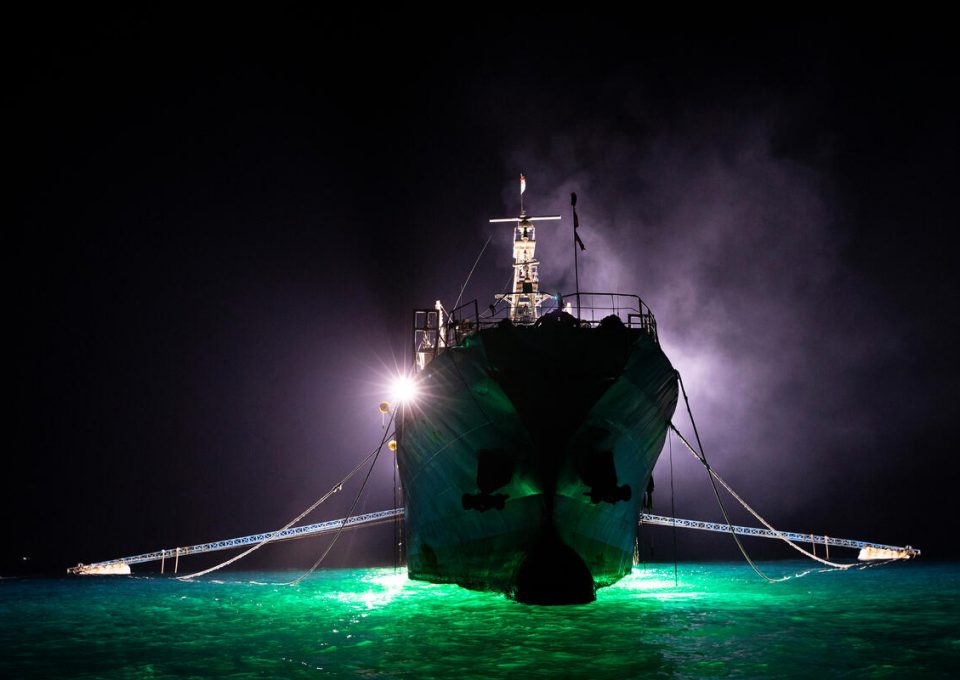 The destruction is pretty evident, even without getting close: shining lights on the water attracts everything, not just squid. And their huge nets scoop up everything, which means so-called ‘bycatch’, or incidental catch, is likely to be very high. Bycatch is one of those words that doesn’t mean much on its own, but if you say, dolphins, sharks, devil rays, or in the case of these squid boats, any other marine life that isn’t squid that will be caught and hauled in dead, then it begins to resonate more.

This is a new fishery, it has only been operating in the northern Indian Ocean for a few years, and each year it grows and grows. This is not an isolated issue: 90% of fish populations globally are either overfished or fully fished. With the current fragmented system of ocean governance, this new fishery slips through the net of regulation and there is no detailed information about how much is being caught.

My curiosity is piqued by these industrial cities operating on the ocean and I’d love to have got closer, but I think that very distance gives this fishery an intrigue that requires closer scrutiny. It is believed that each of these Chinese vessels is catching over 50 tons of squid per week. Apparently, they operate in close coordination, some of them with their satellite tracking systems off. What we saw was grim, but only a piece of a much larger jigsaw across our oceans – no single fishery or country is to blame on its own.

What we saw was grim, but only a piece of a much larger jigsaw across our oceans. 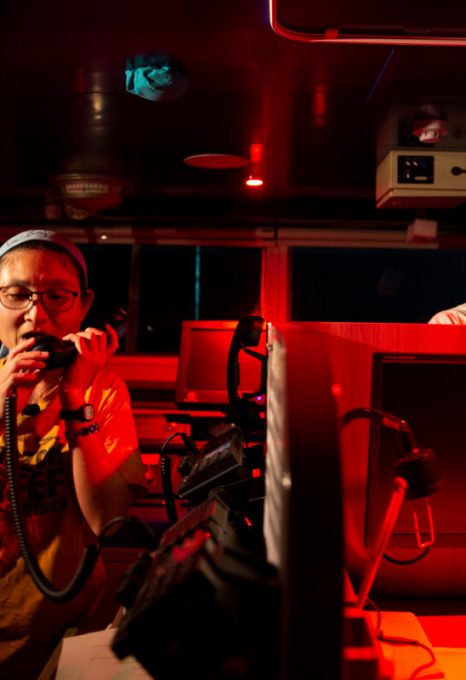 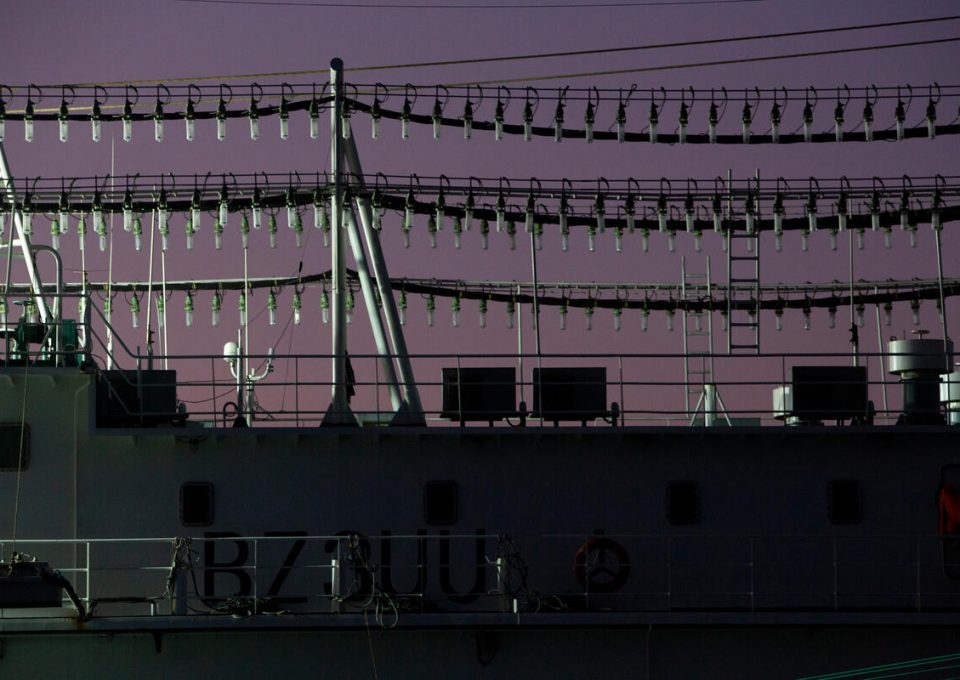 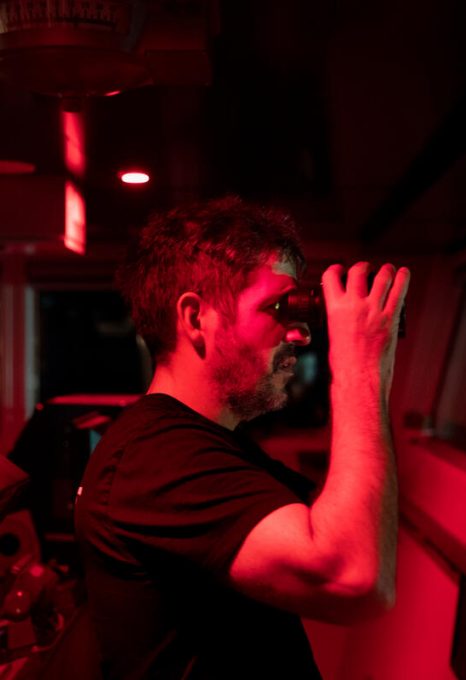 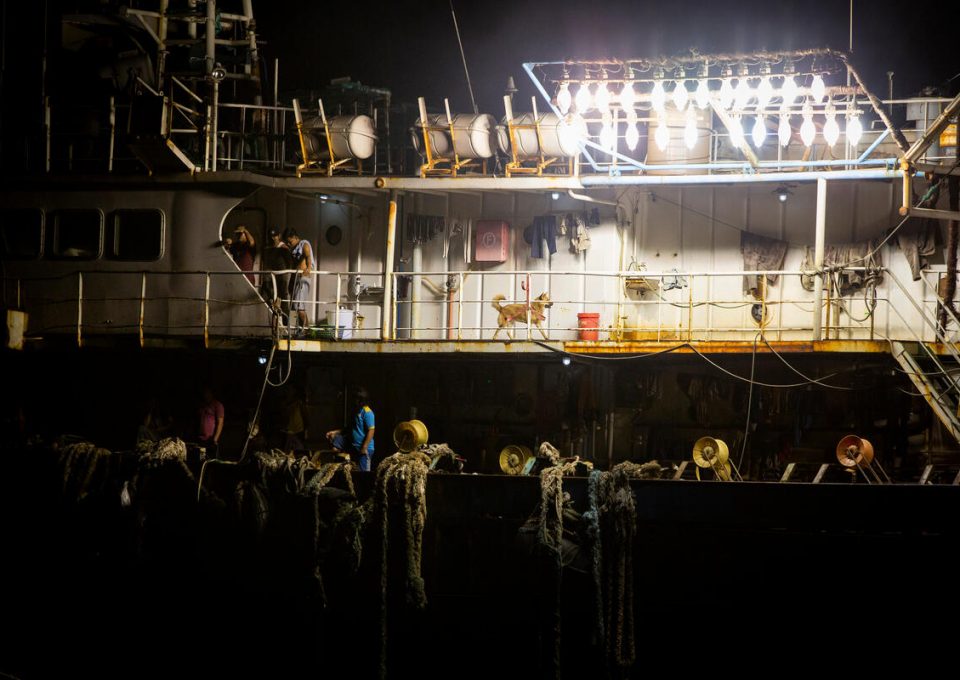 The only thing we are missing is the political will to make it happen.

If only there was a way to protect huge chunks of the oceans against destructive activities like industry fishing. If only we could create ocean sanctuaries across more than a third of the high seas to give marine life a chance to recover. Well, actually we can – the only thing we are missing is the political will to make it happen. Right now, governments are negotiating a new treaty to govern the global oceans – it could almost be a ‘Paris Agreement’ for ocean protection.

We need a Global Ocean Treaty so that industrial fishing vessels can’t just plunder our seas without scrutiny. We need to ensure the health of our oceans not just so that there are fish for those who rely on them for sustenance and livelihoods, but to ensure the future of the largest ecosystem on earth.

The only thing we are missing is the political will to make it happen.