What does it take to protect a coral reef? Patience, dedication, determination and know-how. These are the tools that an NGO in Mo’orea uses to defend its reefs and capture the attention of the global ocean community. In Issue 12 of Oceanographic, we go behind the scenes at Coral Gardeners HQ in Tahiti.

There are those who say that you can tell where in the world a photograph was taken based on the colour of the water. Truly, there is nowhere quite like French Polynesia to demonstrate this theory. The ocean there seems to have a unique blend – the deepest cerulean that melts into a dark powder blue, dappled with icy streaks from the sun. Almost all of the 118 islands have coral coastal marine ecosystems, with the exception of the Marquesas Islands. They boast nearly 200 species of corals, 1,200 species of fish and 1,000 species of crustaceans. However, after consecutive years of coastal development, the ongoing pressure of tourism, bleaching events and escalating climate change, the reef communities are declining. The coral rubble sweeps into the waves, distorting that instantly recognisable blue. However, on the small volcanic island of Tahiti, in the Mo’orea Island lagoon, a group of young ocean lovers has decided to do something to try and protect their paradise.

The movement was founded nearly three years ago by Titouan Bernicot, who grew up on a pearl farm in Ahe, a small atoll at the North of the Tuamotu. “When I close my eyes at night, all I see is the ocean. It’s my everything,” he said. “From the mountains to the sea, everything here is connected. We are surfers, fishermen and freedivers. The coral reef gives us everything in our life. Endless joy and adventures, the food that we eat and the oxygen we breathe.” Since its launch, it has acquired ambassadors such as Diplo, Alexis Ren, Cristina Mittermeier, Jack Johnson, Paul Nicklen and (Shark Girl) Madison Stewart. 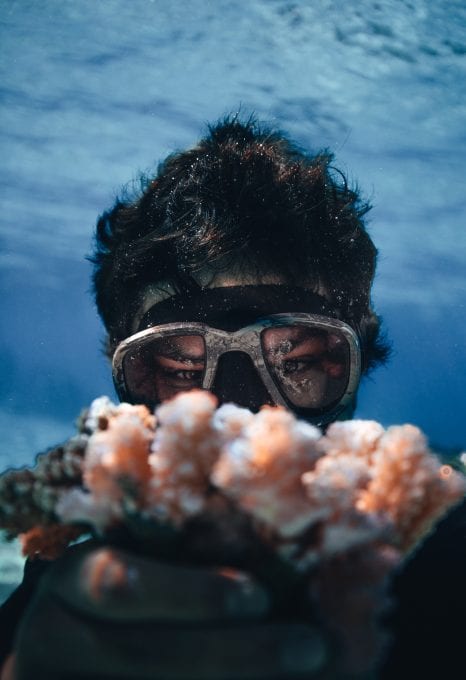 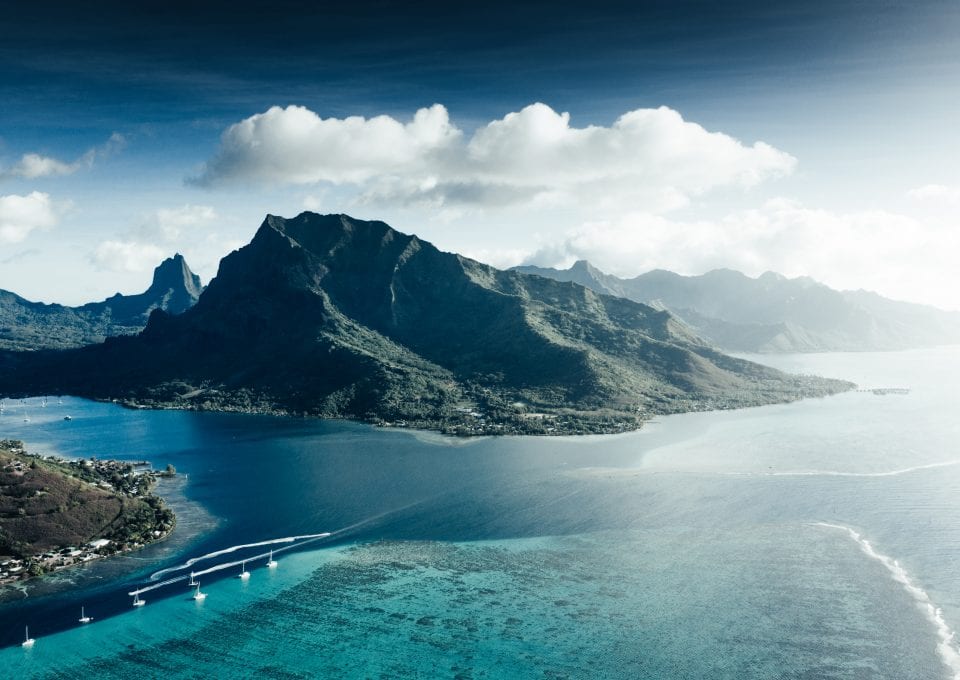 Just like any other reef in the world, Mo’orea has been hit by rising ocean temperatures, escalating weather events and ocean acidification on the outer slope. Areas of the reef that are becoming wastelands of seaweed and dead coral rubble are on the rise. The lagoon itself faces the same threats with the added element of human impact. Pollution, divers treading on the reef, boats damaging it, chemical runoff from industry as well as huge freshwater inputs during the rainy season.

It is estimated that around 75% of the world’s coral reefs are facing threats from pollution, overfishing and human activities or global heating, while coral reefs coverage has already declined by 30%-50% since the 1980s. Coral reefs cover less than 1% of the earth’s surface and less than 2% of the ocean bottom but up to 25% of all marine life relies on them. We rely on them too, for the air we breathe, the food it provides and the livelihood it gives to millions of people. They are vital for protecting numerous island coastlines around the world from forceful ocean waves and some potentially devastating weather events. The larger and more intricate the reef is in terms of its structure, the more it can reduce wave energy. With so many different threats weakening these natural barriers, an increasing number of coastal residents are set to be at risk. Without immediate and intelligent action, all coral reefs are at risk of disappearing by 2050, with disastrous consequences for marine life.

Thankfully, Mo’orea is one of the more resilient reefs and has, so far, managed to mostly recover from major bleaching events. But with rising ocean temperatures, the Coral Gardeners are trying to act quickly and think ahead by looking out for ‘super corals’. These are individuals of any coral species that, for one reason or another, won’t bleach when others do. The reason for that is often a stronger genetic background, that allows them to endure warm temperatures or longer periods of stress.

Around 75% of the world’s coral reefs are facing threats from pollution, overfishing and human activities or global heating. 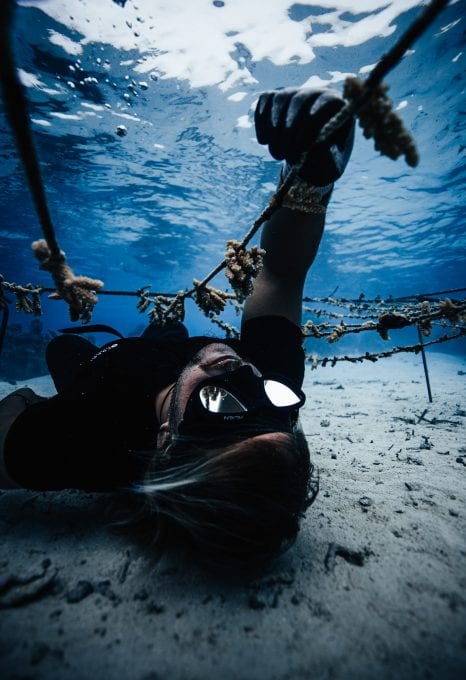 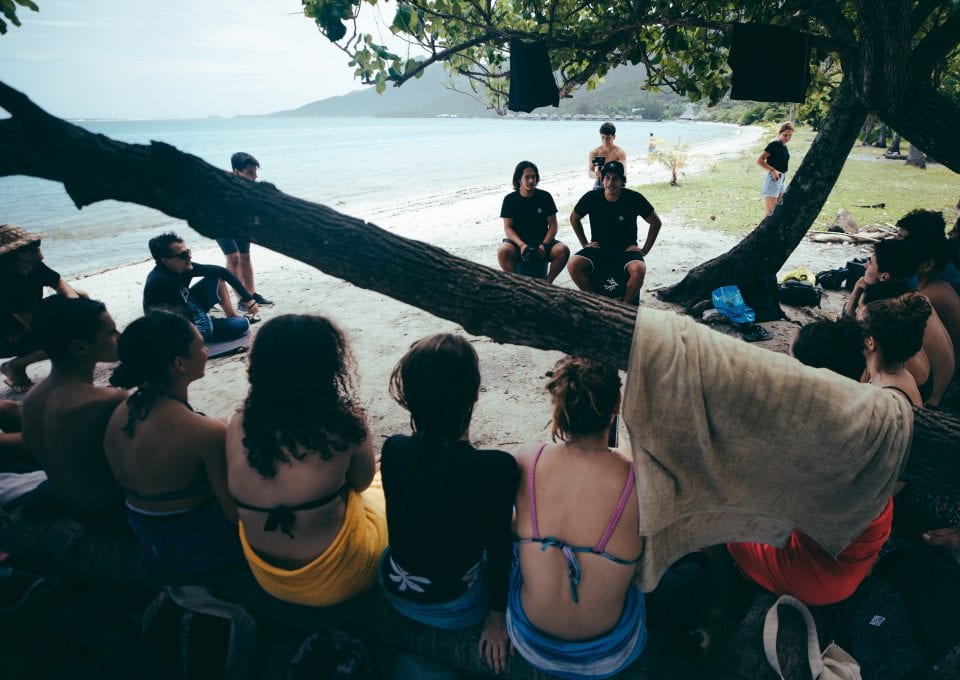 People need to realise how important reefs are for life on this Earth.

“The issue behind climate change and coral bleachings is not simply the death of the corals,” explained Mathilde Loubeyres, the Coral Gardeners’ in-house scientist. “The issue is that the reef never comes back the way it was before in terms of coral assemblages. We are witnessing a change in morphology that translates into a loss of functionality. Over the years we are losing branching, foliose, digitate corals to encrusting, submassive or massive species. We are losing the three-dimensional structure that provides shelter for fish, habitat for all benthic species, and a barrier against waves and erosion. Without this three-dimensional structure, the reef flattens and it’s the whole assemblage that shifts. This is what we’re trying to restore. We try to select super corals of three-dimensional species to encourage the recovery of the reef as an ecosystem, not just as a coral reef.”

The restoration process could be likened to gardening on land. Currently, the Coral Gardeners have four sites and five nurseries. They are working with a cementing technique while implementing the new super corals project. For the cementing technique, broken fragments are collected in the ocean and placed on underwater nursery tables. After a few weeks, these fragments are secured using marine cement on damaged areas of reef across five key zones in Marine Protected Areas of the Northern lagoon of Mo’orea. Outplant substrates consist of dead reef structures known as ‘coral potatoes’. The chosen outplanting surface needs to be scrubbed of all algae or sediment prior to cementing in order to maximise the coral piece’s chance of self-attachment. This technique provides a hard surface for the corals to colonise immediately, before merging with the substrate, which then facilitates their growth.

Over the following months, these newly planted marine habitats are closely monitored. Currently, the species of focus include Acropora (A.) hyacinthus, A. pulchra, A. cytherea, Pocillopora (P.) eydouxi, P. meandrina, P. verrucosa, Pavona cactus and Napopora irregularis. Of course, the mitigation of anthropic stressors with the help of the local community also has to play a role if their success record is set to continue long-term. Tahiti benefits from both Marine Protected Areas and the Rahui – a traditional Polynesian method of managing natural resources or seasonally restricting usage – with fishing exclusions and quotas. The Rahuis are an ancestral practice and as such are very much respected.

“I am part of the restoration team so everyday we go out in the water for a different mission,” said team member Maoritai Teiho. “At the moment, we collect opportunity fragments on the ground of the lagoon. These are live pieces of corals broken by the current or marine life or human activities. Then we cement those fragments to dead bommies so they have a new place to attach themselves to grow on. When I was a child, I thought corals were rocks! We need every kid to know what a coral is, to not be like me and think that they are just rocks. People need to realise how important reefs are for life on this Earth.”

People need to realise how important reefs are for life on this Earth.