A friend in need

A friend in need

Most of the wild animals I’ve looked in the eye have been underwater.

With every shark species I’ve swum alongside, it feels like a mutual curiosity. For me, when you look an animal in the eye you can see it has a personality. With sharks, you can really see a character looking back at you. I do sometimes find myself apologising to them.

I have always been fascinated by marine animals. When I was a child, I was always drawing pictures of orcas, great white sharks and leopard seals, which were the animals I used to watch closely in wildlife documentaries. Back then there weren’t quite as many documentaries being made, so I would watch the same ones over and over again.

I first started playing with cameras when I was a kid, my dad had access to a huge VHS shoulder camera, and some old school VHS editing machines. I started making movies when I was quite young, and also re-editing nature shows with my own voice over – they were terrible. I didn’t go into a career behind the camera immediately – it was an interest but nothing more. When I picked it up again in 2014 it was mostly editing and underwater filming with a GoPro. It was that year that I took a big leap back into filmmaking, as I headed to South Africa to intern for a company called White Shark Africa. 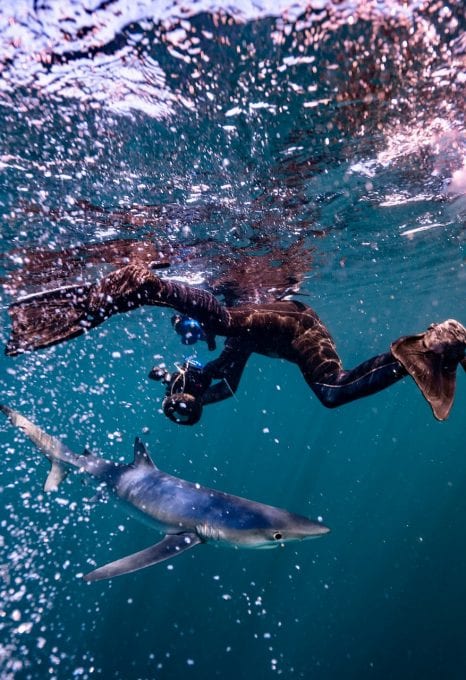 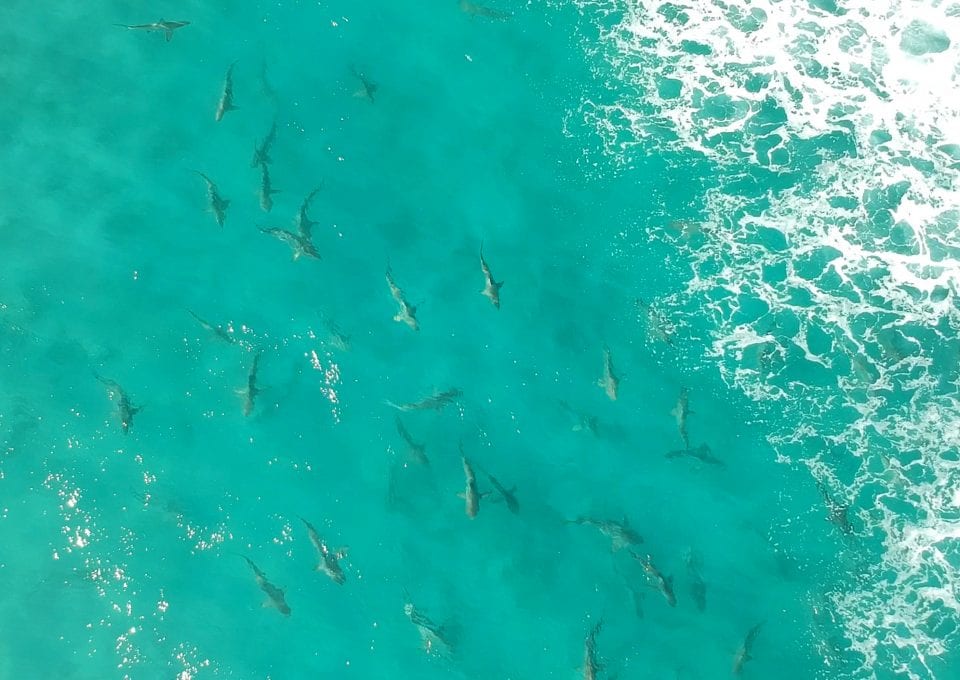 By the time I got around to watching Jaws for the first time, I was maybe 12 years old and had already seen numerous shark documentaries. I remember watching that movie and thinking ‘well that would never happen.’ Years later, I knew how I felt about sharks going out to South Africa. The wrong perceptions around sharks used to bother me more than they do now. I’ve actually found that, in just the short years I’ve been working with sharks, perceptions are changing. There seems to be more of a general understanding of them now, that they are not man eaters and desperately need protection.

It was in South Africa that I saw my first ragged tooth shark (grey nurse/sand tiger). I had seen them in aquariums in different parts of the world and knew a little bit about their style. ‘Raggies’ look pretty intimidating, but that’s just because you can see most of their teeth, most of the time. They’re actually incredibly docile and tend to drift most of the time. We came across a ‘raggie’ in the entrance to a cave, which was a real moment for me. I remember lying next to it for a few minutes, then left it to get on with its day.

In South Africa I got to know some of the individual sharks that we saw over a period of time. I’ll always remember one in particular, a large female named Blackgill, who was an incredibly charismatic, powerful and energetic shark. She would come to Mossel Bay to hunt for a few weeks at a time then disappear. The smaller sharks around the boat would quickly give way when Blackgill turned up, as the larger females have first feeding rights. Sadly, she hasn’t been seen now for a few years now. I still talk about Blackgill a lot, even mentioning her in my TEDx talk, and it’s made me realise how valuable that connection can be for marine animals under threat.

There seems to be more of a general understanding of them now, that they are not man eaters and desperately need protection.

After returning to the UK, I continued to work in and advocate for the underwater world. The waters around the UK are teeming with an incredible array of species, but most people don’t think of it as a good diving spot. I’m intrigued by the marine animals of the UK, especially the sharks we have, of which there are least 37 different species. I love the idea that there are hundreds of sharks swimming around our coast, and we have no clue. In fact, all the animals people go to other parts of the world to see, sharks, dolphins, whales, we have in our waters.

Earlier this year I worked on a project with wildlife biologist and presenter Lizzie Daly, called Wild Ocean Week. The plan was to showcase the best of British marine life and to encourage people to appreciate the nature that exists just beyond the garden fence. Famously now, we came across a giant barrel jellyfish in Falmouth, which was the same size as Lizzie! The cameraman in me took over very quickly, and I think it must have been after about 20 mins of filming I was able to just take in what a huge creature it was! When we surfaced, we both just screamed, and spent the next few hours buzzing.

The week filming marine animals with Lizzie was fantastic. In the Farne Islands we snorkelled with grey seals, in Scotland we encountered minke whales and lots of dolphins. We had so many plans that were cancelled or altered by the weather, but these ‘in the moment’ decisions allowed us to end the week with a rather special jellyfish.

I spent much of this year continuing to explore the UK, but one thing held my focus. I have spent several years trying to see blue sharks and I headed to Cornwall this summer for my sixth attempt. Thankfully, these days I’m never in the water without a camera. We waited around five hours on the boat before any sharks appeared, and when they did, I was the first in the water. Experience has taught me not to mess about when wildlife shows up. Within seconds, a curious blue was nose bumping my camera and I was blown away. Blues are one of the most beautiful marine animals – they’re very sleek, streamlined and move silkily through the water.

it’s made me realise how valuable that connection can be for marine animals under threat.

Without context, it can be difficult for some to feel empathy towards the marine environment.

These days, I’m working in Mallorca with a charity called Save the Med (STM). The Med is in a lot of trouble, and the situation here feels very urgent. It has 21 countries that share its waters, meaning there are lots of different laws, regulations, catch limits, fishing techniques and targeted species. A result of this has led to its fish stocks falling massively, and plastic pollution having a huge impact. At STM we don’t say conservation because just to conserve what is left here won’t be enough to save it, it actually needs careful regeneration.

My role here is creating engaging multimedia, both filming underwater and topside – showing people that ocean creatures are vibrant and well worth protecting. I think showcasing an animal’s personality allows people to connect with it more easily. Without context, it can be difficult for some to feel empathy towards the marine environment, despite the fact that life below and above the waves is intrinsically linked. There is no doubt in my mind that sharks (and other marine life) have enormous personalities, and this can even help explain some of their curious interactions with humans. Learning about and gaining an understanding marine animals is a necessary first step to providing the respect and protection they so desperately need.

Without context, it can be difficult for some to feel empathy towards the marine environment.