Journeying to the deep

Journeying to the deep

“A cow? Repeat: A cow? What’s a cow doing down there?” the underwater telephone crackled as the Surface Officer relayed what he had heard. Or misheard.

I was descending in a two-person Triton submersible at 50ft a minute, down the side of an extinct volcano a few miles off the coast of Bermuda. I was part of Nekton’s first Mission to explore and research the state of the ocean. It was the realisation of a dream that began when I was a child.

I have always had a fascination with the sea. My mother always tells the story of when I was a five-year-old on a family holiday at the seaside. I was scrambling around in some rock pools and found a strange, brightly coloured sea creature. “Mum,” I said, “what’s this?” She told me it was a starfish.

Then I found another equally bizarre creature nearby. Again I asked what it was. “It’s a starfish, Lucy. I’ve already told you that!” “But mum,” I replied, “it’s a different colour and this one’s bigger and it’s not really the same shape.” My mother always says that is when she realised I was going to be a scientist. Full of wonder, she says, but always obsessed with details.

Nothing can prepare you for your first dive in a Triton, a new breed of submersible. They are incredible pieces of technology – a sci-fi fantasy made real. David Attenborough was taken down in one when filming on the Great Barrier Reef. The subs were used extensively throughout the BBC’s Blue Planet II series.

The acrylic transparent pressure hull feels as if it disappears when you are underwater, affording the sensation of floating like a voyeur in our planet’s inner space. Apart from the occasional communication with the surface, it is blissfully quiet during descent as the weight of the submersible and the flooded ballast tank carries you downwards without the need for noisy thrusters. 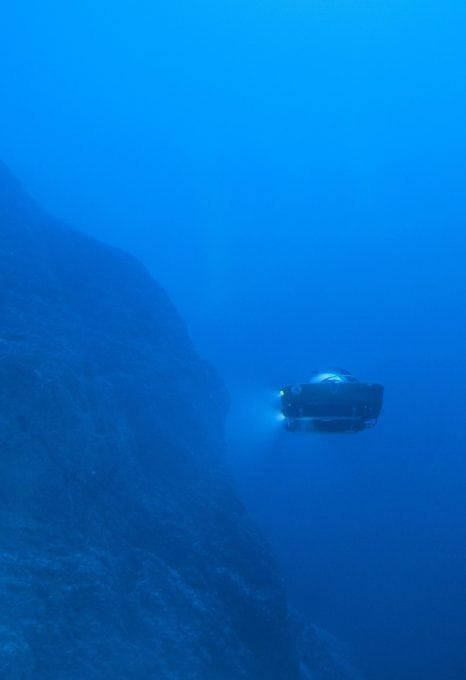 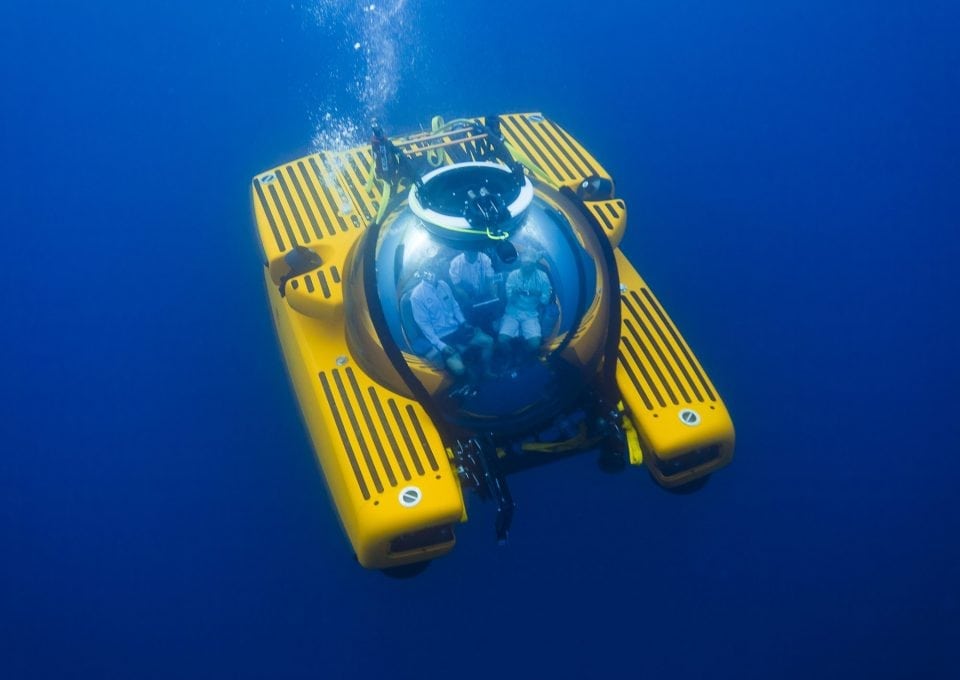 I guess Mum had been proved right. I do have a passion for the sea and my life as a scientist has all been about trying to understand more about it. The deep ocean is our planet’s largest and most critical ecosystem yet it remains the least known part of our planet. We do know that its health is vitally important for a healthy planet, and our own healthy lives.

I have been fortunate to work in some fascinating areas of ocean research during my career as a scientist. But the opportunity to work with Nekton has been a highlight.

Our goal is simple – to explore the depths of the ocean and reveal the unknown. The vast majority of deep ocean research is funded by governments. As a small charitable research institute, our mission is to collaborate with others and act as a catalyst to find new ways to accelerate scientific discovery of the ocean.

It took us 20 minutes to reach the seabed, falling through shades of blue until the darkness finally swallowed us in. At 300m – our maximum operating depth – nothing of the blistering mid-summer Bermudan sun remained. We awaited the arrival of our sister submersible, another Triton, with which we were completing our dive. My submersible, Nomad, was equipped with sampling equipment, the other, Nemo, was equipped with cameras to document life on this part of the seabed for the first time, a Planet Earth-based Mars-lander. A Sargassum fish – an otherworldly frogfish capable of changing colour – had latched onto our sub for the descent, hitching a ride as if were part of the habitat – a giant piece of algae or seaweed. Nekton meets nekton.

It took us 20 minutes to reach the seabed, falling through shades of blue until the darkness finally swallowed us in. 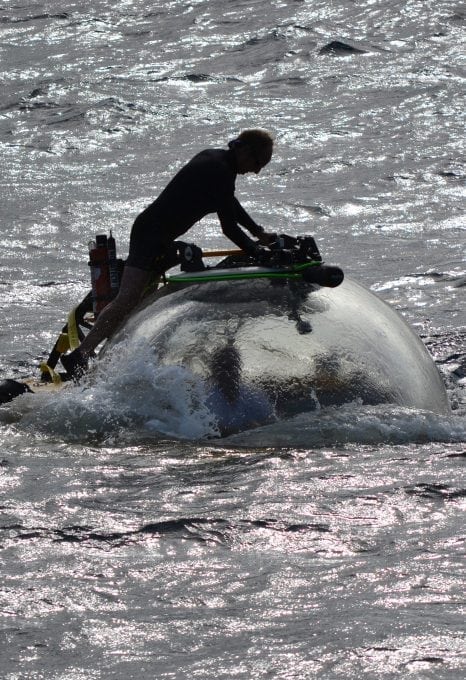 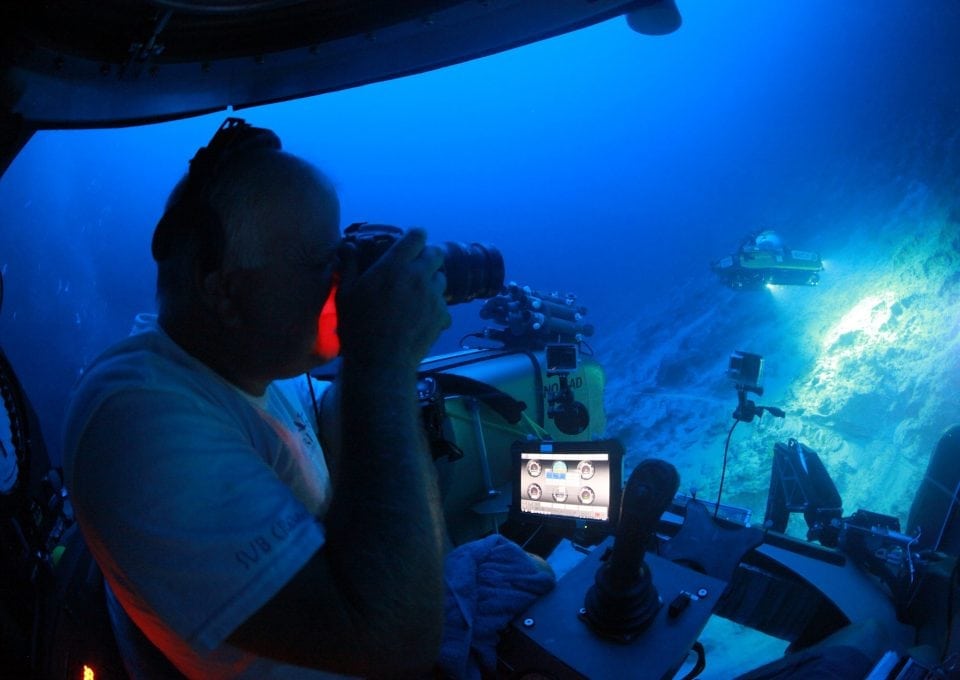 I surveyed the seabed around me, marvelling at being able to witness such an environment first-hand.

With only a fraction of 1% of the ocean explored, it takes a 21st century oceanic shuttle like the Triton to become a pioneer, enabling us to become the first people to ever lay eyes on a previously unrecorded part of our planet.

My pilot, Kelvin Magee turned on the submersible’s headlights to light up this formerly unseen world. With light, the colours returned: orange sea stars, red sponges and yellow sea fans. Life was diverse and abundant.

What makes the Triton so revolutionary is its 360-degree spherical hull which holds the observation platform where the pilot and scientist sit. Observation is where the journey of enquiry begins. I surveyed the seabed around me, marvelling at being able to witness such an environment first-hand. As an ocean scientist the advantages of being physically present on the seabed cannot be overemphasised. I am used to seeing these images on a screen, data beamed up to the surface ship. Being there in person I could immediately see things of potential interest that would have been much harder to spot watching a video feed from a Remotely Operated Vehicle (ROV), a racehorse with its blinkers suddenly removed. I instantly saw features and patterns that from a screen would have required extensive data analysis to recognise. There were different types of fauna in the valleys than there were in the ridges of the rock, for example. I am usually on the edge of my seat when I watch such images in 2D; being there in person was unimaginably thrilling, a dream realised.

This is an excerpt from Dr Lucy Woodall’s feature-length article ‘Deep Science’ in Issue One of Oceanographic Magazine.

I surveyed the seabed around me, marvelling at being able to witness such an environment first-hand.