Peering down at the dark, early morning sea, I questioned the prior intuition I had felt about the day ahead. The sea did not look welcoming.

Less than an hour earlier, I had hauled my tired limbs from the warmth of my bunk, hopeful of a great dawn dive. But as I entered the water, I felt betrayed by my optimism.

Goosebumps. It was cold. Too cold. Thirty minutes in I began to lose feeling in my feet and decided it was time to head to the five-metre mark for my safety stop. A few sharks escorted me on my ascent, phasing in and out of the murky morning. The next three minutes felt like a trans-Atlantic flight in the twilight zone.

As I bobbed in the water waiting for the zodiac to arrive, I pondered the unusually poor conditions and cursed my morning optimism. The diving around San Benedicto Island in the central Pacific Ocean is typically a lot more pleasant.

Ready for a warm shower and breakfast back aboard the Solmar V liveaboard, I began to peel off my wetsuit. As I reached for my zipper, a frantic voice rolled across the deck, thunder across a prairie. “False orcas!” a man shrieked. “False orcas!”

I searched desperately for my fins and, plucking my camera from the rinse tank, threw myself onboard the zodiac in a manner that must have looked like I had been doing it my whole life. We set off in pursuit of the pod.

The previous week, I had set sail with the Solmar V into the Sea of Cortez to avoid Hurricane Aletta, which was projected to hit Revillagigedo Marine Park, North America’s newly expanded, and now largest, marine park. During the exploratory trip into the Gulf, we encountered a pod of wild, transient orcas moving south along the Baja Peninsula. We spent the better part of a day snorkelling with them. It was one of the best wildlife encounters of my life.

Once the hurricane passed, I had boarded the last trip of the season to the magnificent Revillagigedo, also known as Socorro. And now, hardly a week later, I was once again in pursuit of a pod of ‘killer whales’.

As we sped through the water, I gazed out at the rugged volcanic backdrop and could finally feel the warmth of the rising sun’s rays on my cheeks. Adventure was in the air. Seawater slapped at our faces, but no one cared, fixated instead on the large pod up ahead. I could see the water visibility improving as we moved farther from the dive site. We were now in the blue, the deep blue. 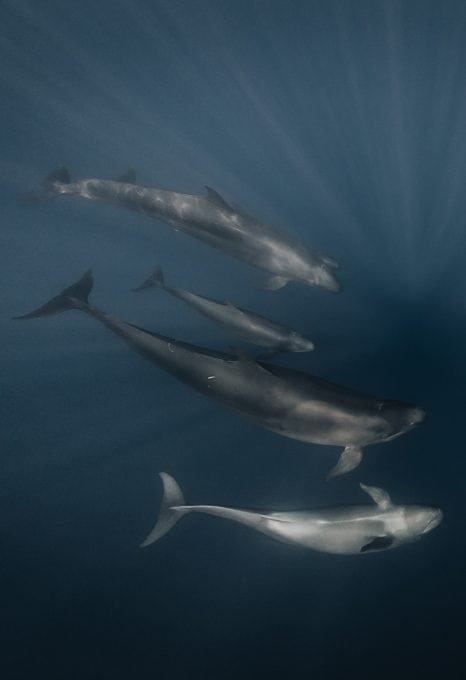 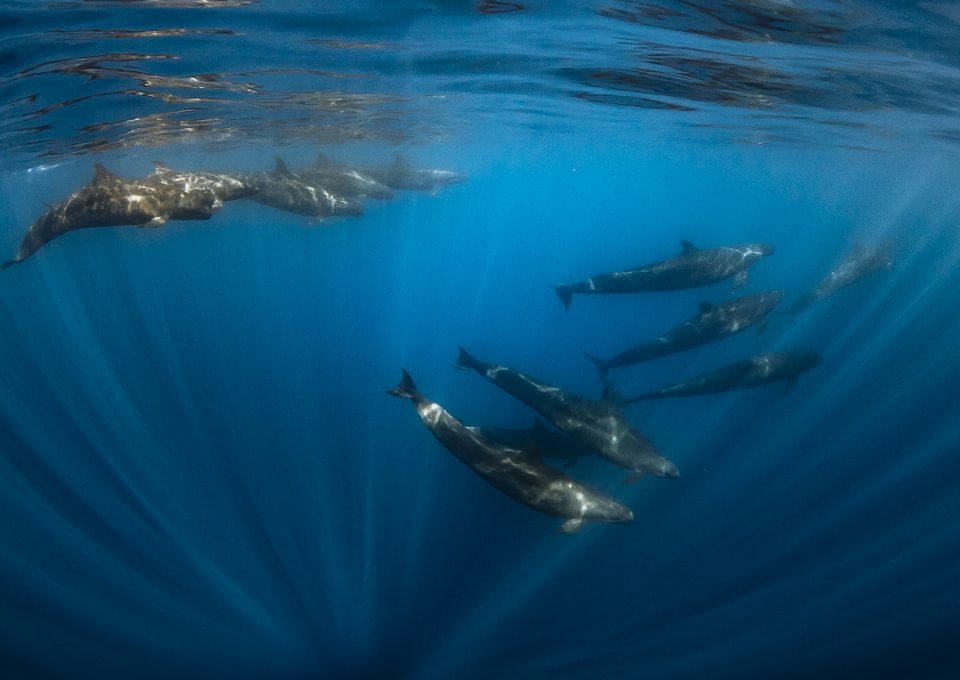 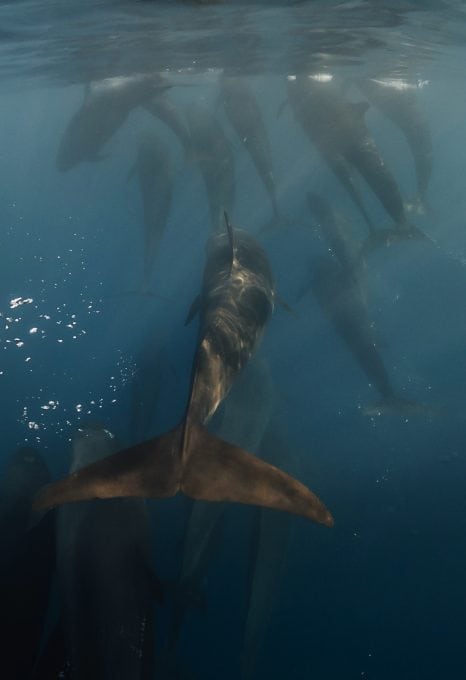 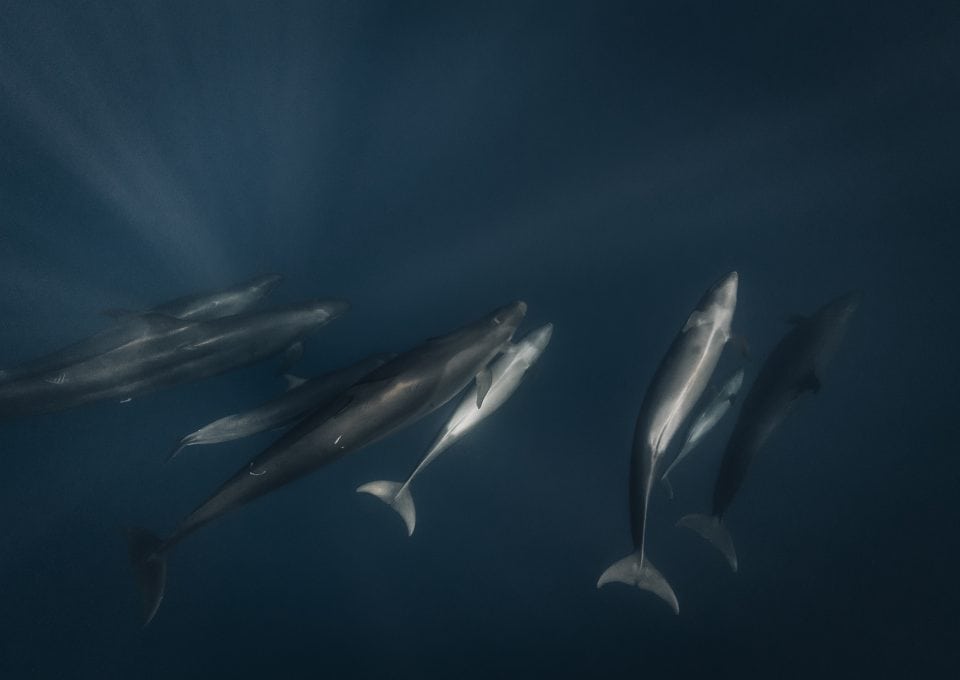 “Get ready,” shouted the zodiac skipper. “Masks on, fins on, cameras on!” With fingers crossed, I tumbled into the ocean. Similar to my previous encounter with orcas, I could hear the pod before I could see it. It was a soothing hum that seemed to approach from all directions.

Camouflaged in the dappled light, the large pod finally emerged from a seemingly endless blue water column. I could hardly contain my excitement as they barrelled in my direction.

This was the great dawn dive I had envisioned earlier from the comfort of my bunk. The whales pushed through the liquid milieu with zest. Some passed directly beneath me, while others cruised beside me.

Pandemonium. Delightful pandemonium. My head and camera twisted in all directions, trying to keep up.

Time slowed as I savoured every moment. But, as quickly as they appeared, they were gone. All that remained were the bubbles from their wake and a dozen or so opportunistic sharks that trailed them.

The zodiac returned and we flung our bodies on board before speeding off after the pod once more. We repeated the process for more than an hour. Each time we dropped into their world, it felt like the first time all over again.

The pod gradually became more curious with each pass, individuals turning on their sides to get a better view of the frantic creatures thrashing about above them. Their sleek, grey bodies moved through the water with a powerful gracefulness, dozens of tails effortlessly slicing through the water.

The encounter was a privilege.

The pod gradually became more curious with each pass, individuals turning on their sides to get a better view of the frantic creatures thrashing about above them. 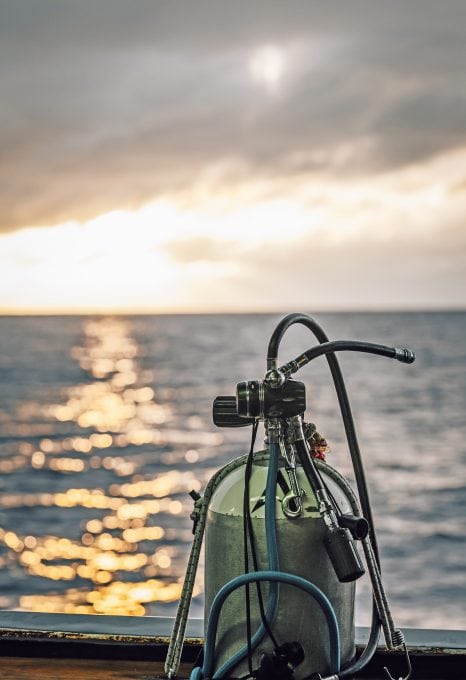 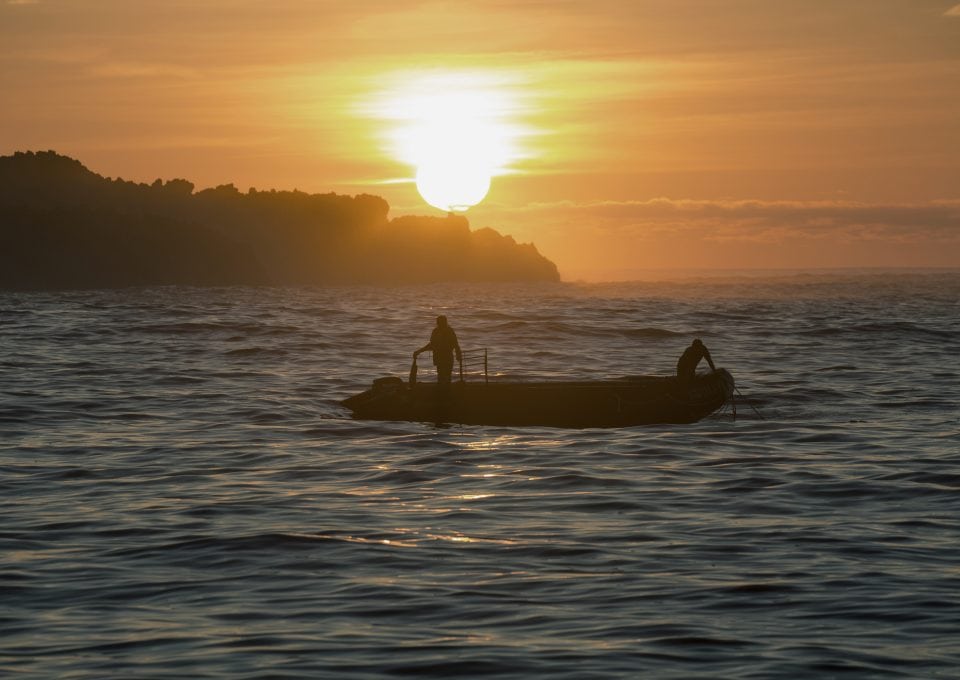 While the false killer whale encounter was the highlight of my ten days in Revillagigedo, I also interacted with bottlenose dolphins, manta rays, whale sharks and many other species of sharks and schooling fish. Bravo to Mexico for protecting this ocean paradise.

Back on board the Solmar V, I digested the morning’s events over a late breakfast and contemplated my heightened infatuation with this untamed frontier. For years I had heard incredible stories about diving Revillagigedo. Now I’d had my own adventure.