The ambient light dimmed as I kicked away from the surface. Zipped tightly into my drysuit with a cylinder of compressed air strapped to my back, nothing but the grainy sound of my own inhalations accompanied me downwards into the ocean.

Twenty, 25, 30 metres deep and I was forced to brighten my underwater lights to identify a large pipe leading away from the industrial farmed salmon processing plant I was investigating. As I neared the end of the pipe the lights illuminated a massive plume of billowing red blood, dispersing directly into Canada’s largest wild salmon migration route. It was a sickening sight; I struggled not to choke on my regulator. This blood water had come from farmed Atlantic salmon grown in open net-pens in British Columbia’s cold seas, but I was not diving for them. I was there for the Pacific salmon who belong on this coast and are now forced to swim through these same waters. I was there because I love wild salmon.

Growing up on a small remote island in the wilderness of British Columbia’s Great Bear Rainforest, I was introduced early to the creatures that swam past my home. The five main species of salmon that live on Canada’s west coast have been a source of endless intrigue for me; sockeye, chinook, coho, chum and pink.

Salmon and humans have co-evolved in the North Pacific for thousands of years, the fish’s nutrient-rich bodies providing the building blocks for life on a land left barren by receding ice sheets. If one looks at a map of the salmon-bearing watersheds of the Pacific rim, you see an ever branching network of arteries reaching hundreds of miles inland, delivering critical marine nutrients to ecosystems seemingly disconnected from the open ocean. First Nation cultures, both coastal and inland, are entwined with these fish in a relationship dating back through legend and archaeology for more than ten thousand years of spawning cycles. 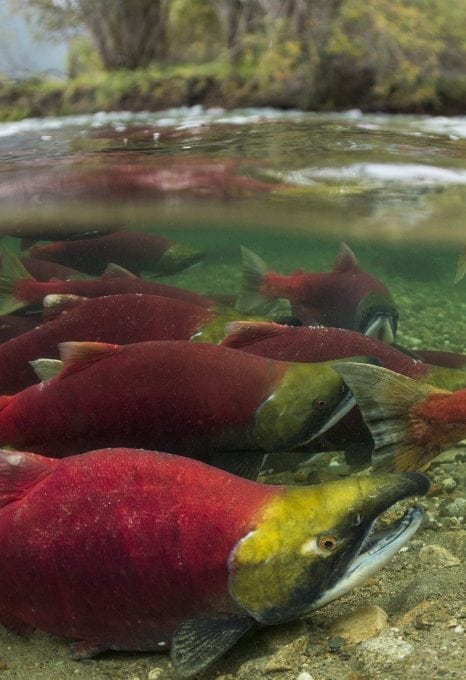 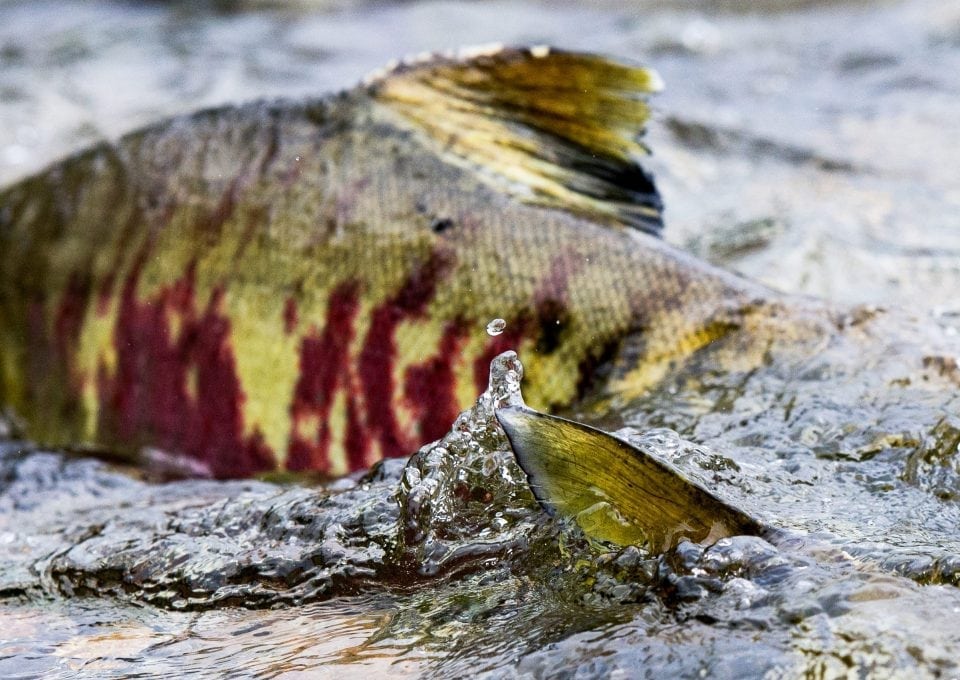 Early in the spring, tiny juveniles called alevin emerge from their eggs in freshwater rivers and wriggle free of the gravel nests that have held them safely through winter. They are swept steadily downstream, sometimes holding in lakes before seeking saltwater and heading to sea. At night, I would lay in bed listening for the delicate flip of the juveniles, called smolts, as they continually dimpled the ocean surface, pouring past my house on their epic journey. Once at sea they spend two to seven years flashing through the north Pacific Ocean between British Columbia and Japan, feeding voraciously and building up energy for their long migration home. Some runs of chinook, the largest of the five species, can grow into 35kg of quicksilver muscle. In summertime as the mature fish returned to the coast in the endlessly revolving cycle of generations, my family would fish to preserve them in jars for the winter; their flesh and bones literally building mine.

Upon nearing their natal river mouths they undergo massive physiological changes in preparation for transitioning from salt water to fresh on the final leg of their journey. Not only do these fish return to the very rivers where they were born, they can sense their way to the exact section of riverbed from which they emerged as tiny juveniles, years prior. In autumn, my sisters and I would await their return to our local streams, overwhelmed with excitement. With notebooks in hand for counting, the first strong fins pushing upwards into shallow pools would be met with cheers of relief for a safe return. Once in the river, their silver bright scales transform into dramatic spawning colours of deep red and purple. Mates are selected to dig shallow nests in the river bottom and after the eggs are laid, the pair will both die to complete the cycle. Their rotting bodies fertilize the rivers and feed the very insects their unborn young will eat the following spring when they emerge from the gravel.

We loved these fish with a sense of awe often forgotten past childhood, and it was this connection that prompted me to pick up a camera in an attempt to share my enthusiasm for these beautiful swimmers. I find myself constantly drawn to bodies of water which might possibly hold salmon, ocean included, and feel claustrophobic when this connection is absent. It’s hard to imagine a place I would rather be than floating through a kelp bed pursuing wary smolts with my camera, or watching mature spawners jump laboriously upstream attempting to avoid the countless predators they so generously support.

In summertime my family would fish to preserve mature fish in jars for the winter; their flesh and bones literally building mine 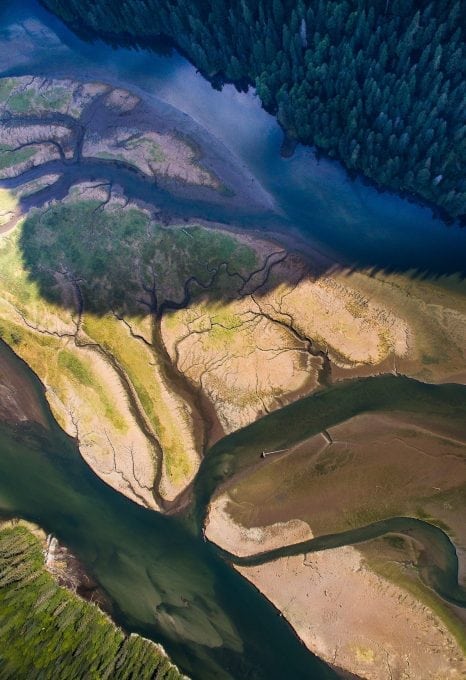 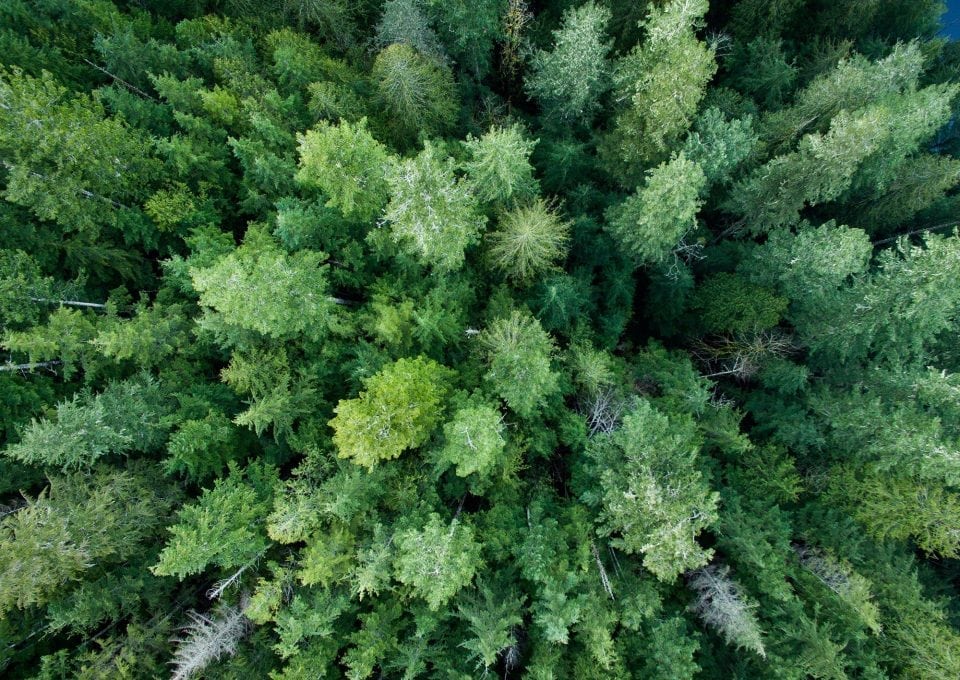 This fish truly feeds the coast. Scientists are able to detect marine-derived nitrogen high in the canopy of salmon-bearing watersheds.

This fish truly feeds the coast. They nourish the killer whales, sea lions, bears, eagles, wolves and they also quite literally feed the forest. Scientists are able to detect marine-derived nitrogen high in the canopy of salmon-bearing watersheds. Predators such as bears often drag salmon deep into the forest to eat them, leaving the carcasses to decompose into rich fertilizer. In fact, the influence of salmon on the temperate rainforest is so strong that larger growth rings in the trees can be correlated to years with larger returns of salmon. In turn, these massive trees stand watchfully over the spawning beds, as much a part of the river as the water itself.

For all the life salmon have generously sustained over the ages, their own survival is now becoming increasingly tenuous. They have faced an onslaught of human impacts over the last century, ranging from habitat destruction to overfishing. Most notably though, is their serious decline since the late 1980s, which coincides startlingly with the introduction of open net-pen salmon aquaculture in British Columbia. This controversial industry originated in Norway and now profits from more than 150 sites along British Columbia’s coast, 98% of which are foreign-owned. Each site contains more than 500,000 non-native Atlantic salmon which are raised in large net-pens floating in the water. Similar to other industrial animal agriculture, crowded living conditions lead to the amplification of an array of diseases, plus parasites such as sea-lice. Unfortunately, there is no barrier to prevent the spread of these infectious pathogens to wild salmon as they are forced to pass the industrial sites situated in narrow migratory channels.

This is an excerpt from Tavish Campbell’s feature-length article ‘The fish that feeds the forest’ in Issue One of Oceanographic Magazine.

This fish truly feeds the coast. Scientists are able to detect marine-derived nitrogen high in the canopy of salmon-bearing watersheds.