As with many seabirds, I smell the gannets before I see them.

A combination of fish and white guano spattered on rocks produces a heady aroma. Closer to the cliffs, smell blends to sound and squawking grows louder with each step. Six gannets appear just a few metres away and I raise my camera to take a photo. My friend Steve Truluck, whose favourite bird is the gannet, stops me: “That’s nothing. Wait for it.” I follow him towards the cliff edge and when we peer below I see what he means. The sheer wall is crammed with thousands of gannets. Dozens more swirl overhead, nearly brushing our heads with their dangling feet as they glide into land.

With a two-metre wingspan, gannets are the largest seabird in Britain. The specific type found here is the northern gannet (Morus bassanus), which arrives from January to breed and migrates south for winter from August to October. Gannets gather on cliffs in vast colonies to raise their chicks. Scotland is a particular hotspot for them, with approximately 180,000 pairs in 14 colonies.

Whenever gannets are mentioned, the usual places that spring to mind in the UK are Bempton Cliffs on the Yorkshire coast and Bass Rock in the Firth of Forth, which is home to the largest gannet colony on Earth. However, another great gannet spot is RSPB Troup Head, situated about an hour’s drive from Aberdeen. Troup Head is the largest mainland gannet colony in Scotland and provides excellent views without the need for a boat trip.

With a two-metre wingspan, gannets are the largest seabird in Britain. 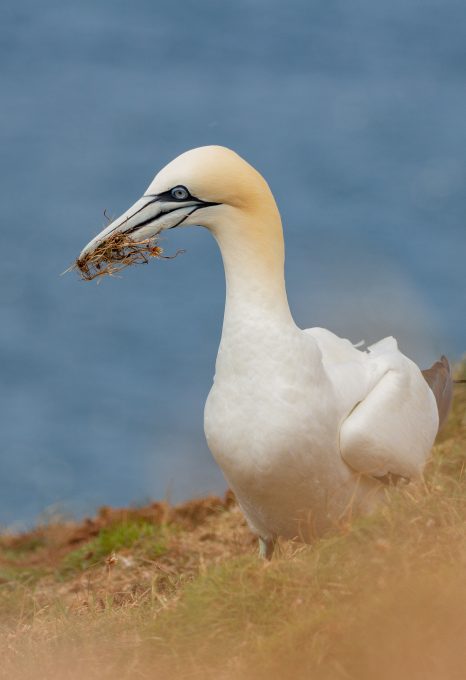 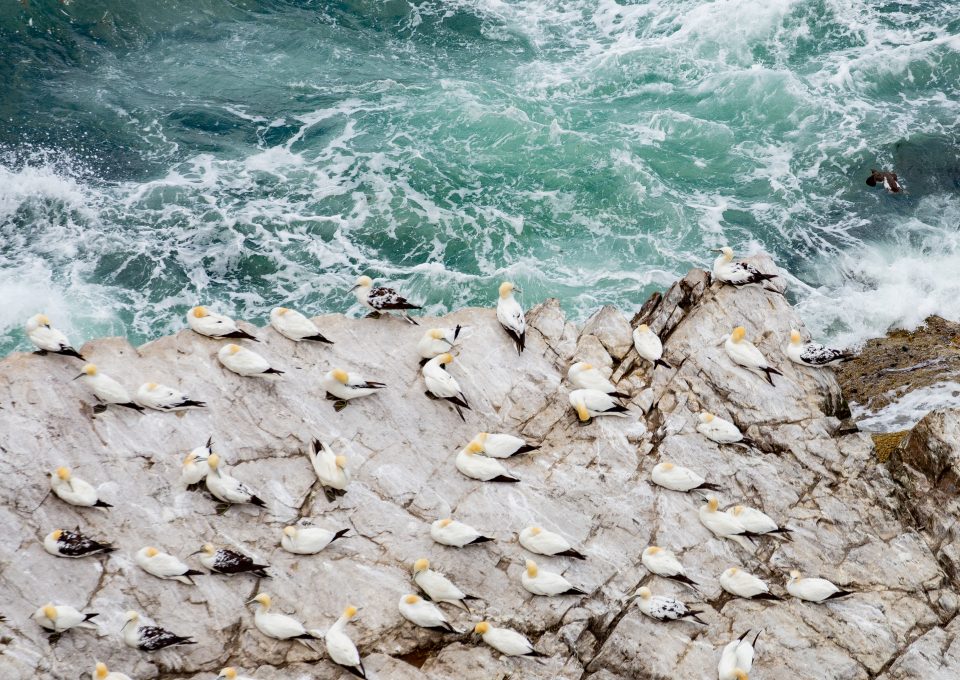 As we perch on the grassy shelf of the cliff – taking care of the steep drop – I notice fluffy white chicks with black, reptilian bills dotted among adults. Gannets pair for life and strengthen their pair bond by rubbing their bills back and forth. This is known as ‘fencing’. Both parents take turns incubating a single egg and to ensure one parent always stays on the nest, a restless gannet will point its bill straight upwards for several seconds to signal to its partner it’s about to take off. Unlike many birds, gannets lack a brood patch so keep the egg warm beneath their feet instead.

After fledging, juvenile birds develop a mixture of white and dark brown feathers and eventually turn pure white in their fifth year. Like many seabirds that spend a lot of time at sea, gannets have black wingtips. This added pigment strengthens those particular feathers and creates a convection current caused by the temperature difference between black tip and white wing. This helps the bird to soar more efficiently.

Troup Head may seem like a precarious place to raise a chick, but the height and exposure of the site provide optimum conditions for take-off – convenient for inexperienced flyers with weaker wings. As we sit taking photos, gannets hang suspended in the air in front of us. We are so high above sea level the swan-sized birds look like white sparrows as they plummet underwater.

It wasn’t always this busy though. Tim Marshall has 66 years of birdwatching experience and has been birding around Aberdeen since he moved there in 1982. He remembers when there were only four gannet nests at Troup Head in July 1988. “Getting there wasn’t easy,” he tells me. “It was a trek across fields, one of which had quite a large bull in it! There were just four nests with a few more birds around. I went back six years later and there were 300 nests.” 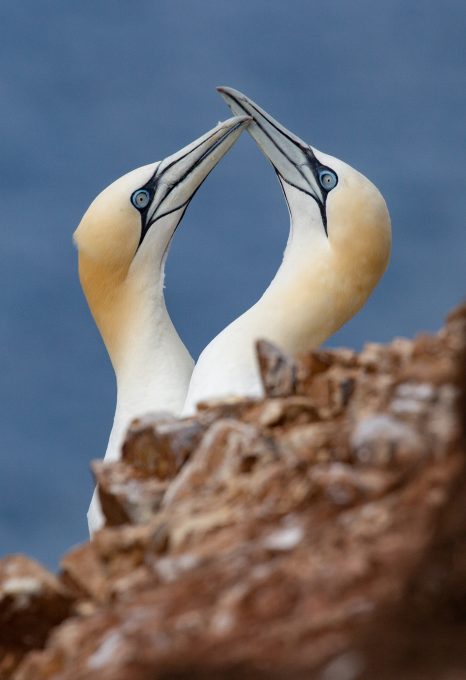 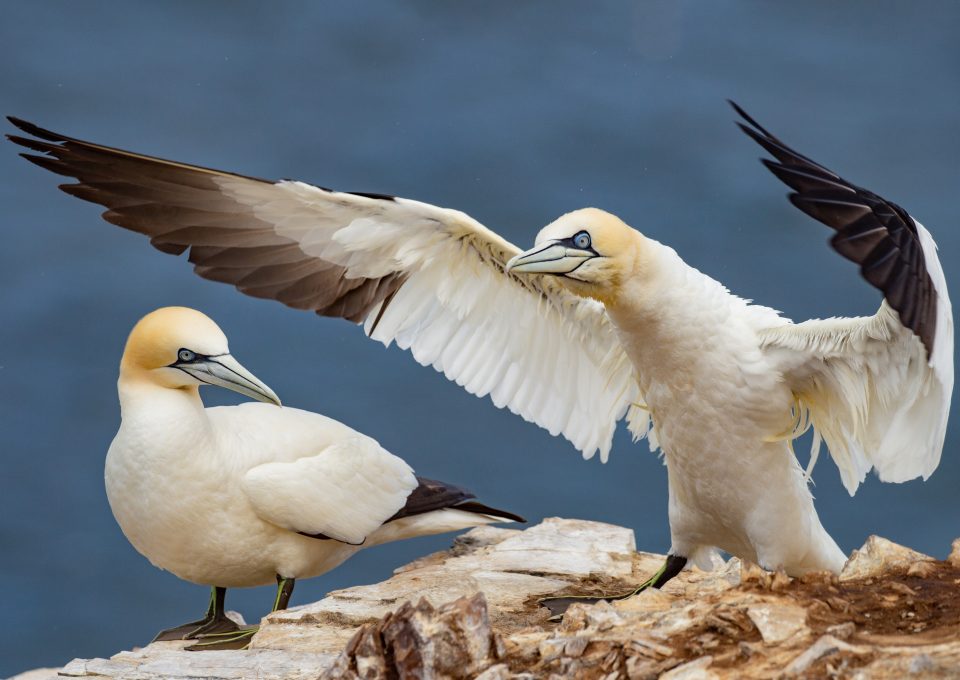 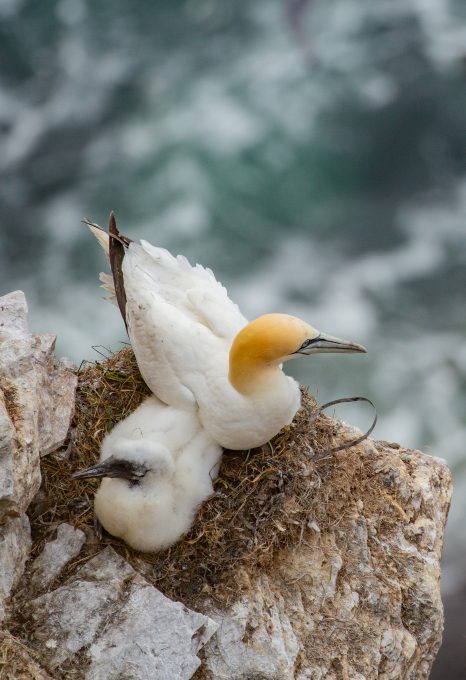 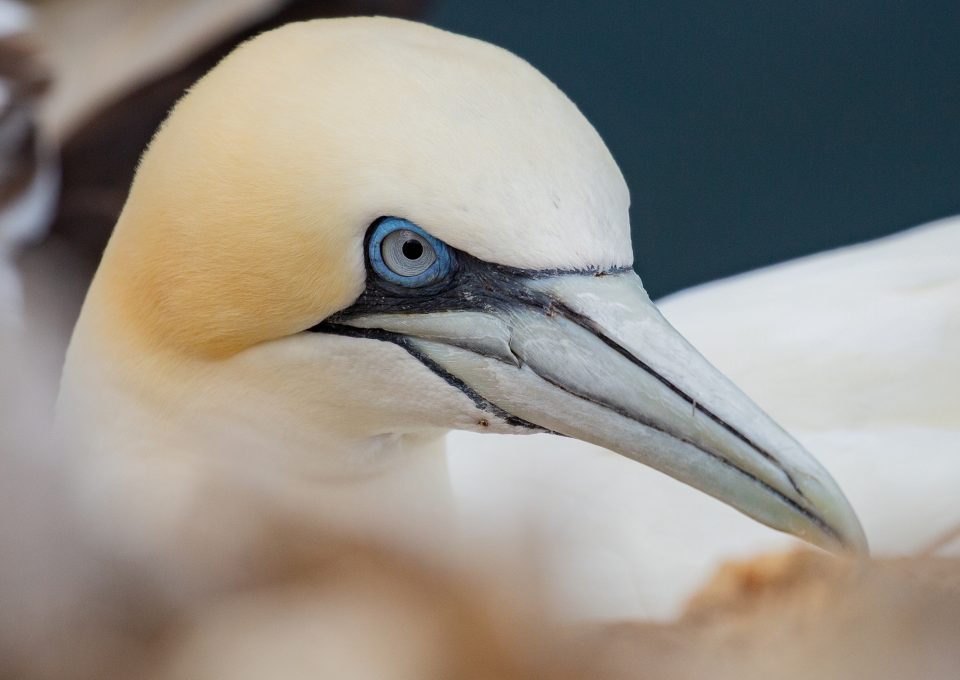 Seabirds, in particular large predators like gannets, provide important insights into the health of our oceans.

Since those first four nests in 1988, numbers have swelled to 2,885 occupied nests recorded in 2013, as well as thousands more belonging to guillemots, razorbills and puffins. Despite such dramatic rises in numbers on this particular cliff, there are still no other breeding sites along Aberdeenshire’s coast. I ask Tim why he thinks Troup Head has become such a popular nesting spot for gannets. “The ledges are fairly deep so aren’t attractive to kittiwakes, and there is good feeding in the area. A fresh nesting site between Bass Rock and Noss [in Shetland] was very welcome.”

Far below us on the water there’s plenty of hunting activity. Gannets dive from heights of around 30 metres in their pursuit of fish such as mackerel, herring and sandeels. During a dive they can hit the water at 60mph, which would usually be enough to break their neck, but gannets have specially developed muscles in their neck to withstand the pressure and air sacs in the base of their bill to absorb the impact. A protective membrane covers their eyes and they have internal nostrils to prevent water from entering them.

Although we are surrounded by the sight, sound and smell of gannets in an unending swarm, the species is currently facing threats affecting lots of other marine wildlife. With rising sea temperatures and falling fish stocks, gannets are forced to venture further out to sea in their search for food, sometimes as far as the Norwegian coast. One parent is usually tending the nest but a chick may sometimes be left alone, putting it at risk of predation from gulls or from other gannets looking for better nest space.

Seabirds, in particular large predators like gannets, provide important insights into the health of our oceans. Despite being quite easy to see in Scotland, gannets are currently listed as Amber in the UK. As a reserve, Troup Head is part of a Special Protection Area (SPA) and the Gamrie and Pennan Coast Site of Special Scientific Interest (SSSI).

The RSPB is working to conserve Troup Head as an important site for gannets by preventing cliff erosion and minimising disturbance during the breeding season. Data collected from population monitoring will provide valuable insights into the continuing effects of climate change and industrial fishing. It’s hard to imagine Troup Head without these striking seabirds. As I watch another gannet glide into land with a queue forming behind it, I hope that will never be the case.

Seabirds, in particular large predators like gannets, provide important insights into the health of our oceans. 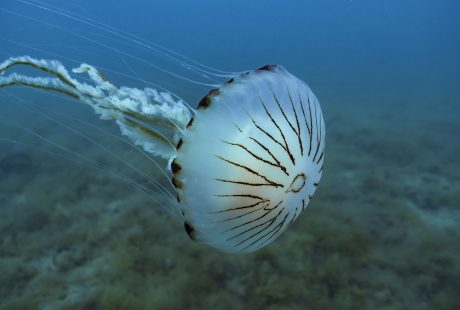 Exploration
Wales: Best of the West
By Jake Davies 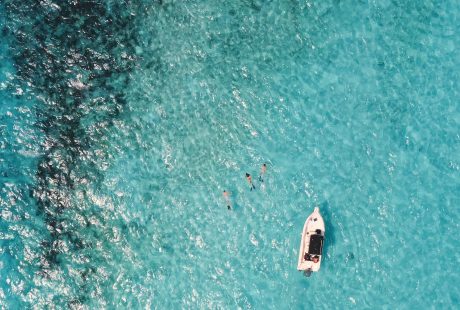 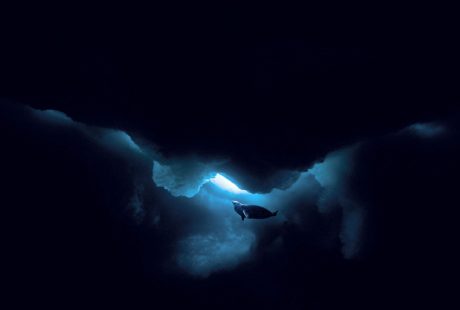