Hawaii-based divemaster and underwater photographer Yara Laufer writes about her night dives shared with giant manta rays. But while the experience is something special, she explains, mass tourism is doing more bad than good.

The moon is reflecting on the surface of the ocean in the waters outside Kona, Hawaii. The salty air is infused with a scent of Plumeria and joyful tension. A fleeting movement in the corner of the eye, a white reflection of the fin tips and suddenly a slowly hovering shadow appears just below the dark surface of the water. That’s the signal – the giant manta rays have arrived and it is time to dance with the devils.

The camera is ready, I put my diving mask on and my heart is beating quickly. One last breath, the world stops for a moment and the only movement is the quiet wing beat of the 18-foot manta ray next to me. It rises determinedly to the surface to feed on plankton, only to pirouette back down towards the seabed shortly afterwards.

The salty air is infused with a scent of Plumeria and joyful tension. 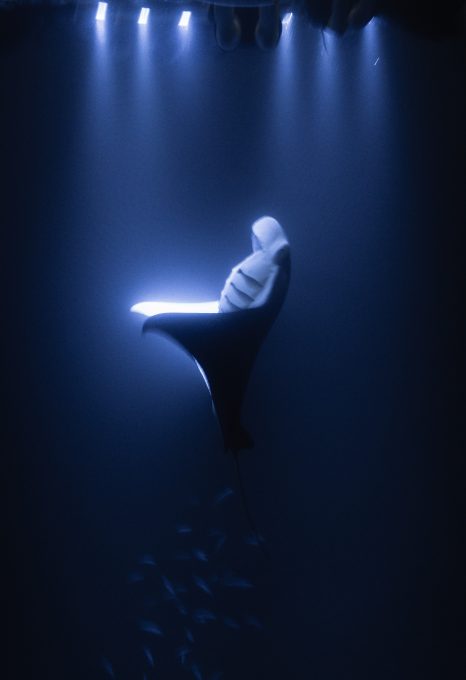 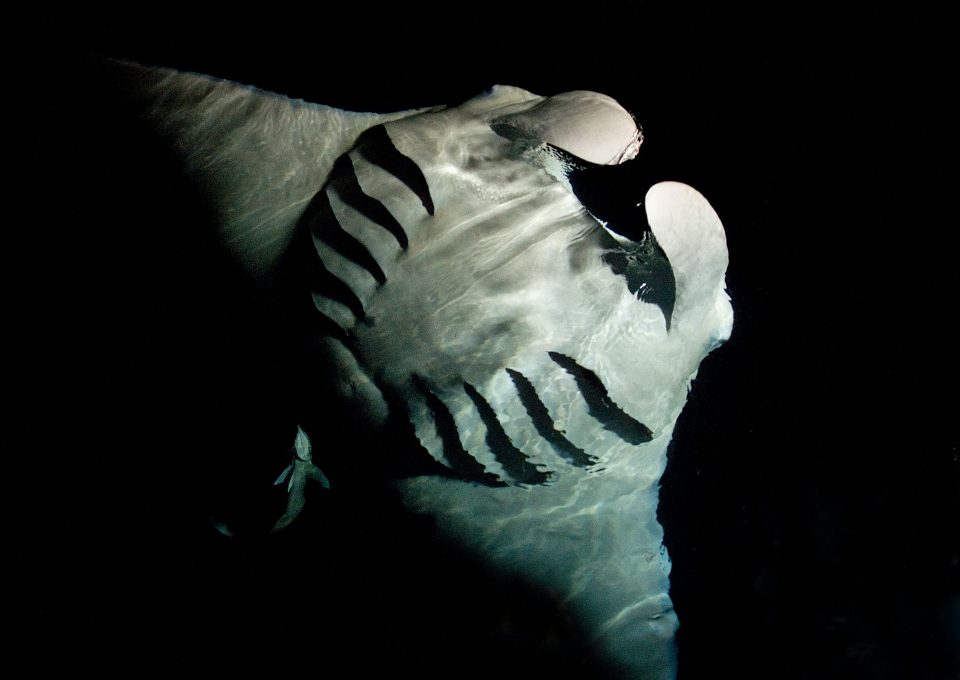 Sometimes it returns alone, sometimes in company, and after a short time it is lost in the crowd. Their nocturnal dance seems so bizarre and mystical, and it becomes clear why this species gets compared to the devil. Its colouring, enormous size and, above all, its outstanding head fins, which look like devil horns, give it an impressive appearance.

With a wingspan of up to 23 feet, a weight of up to 5,300 pounds and a life expectancy of up to about 40 years, these creatures cause a lot of fascination. How can such a big and heavy creature glide along so lightly and weightlessly?

Of course, the fascination of its appearance is universal and awakens the interest of many. Little by little more and more boats arrive and tourists start to jump into the water to join the animals. A brief moment later, the manta rays find themselves in a prison of fins, boats, divers, buoys and anchor lines.

How can such a big and heavy creature glide along so lightly and weightlessly? 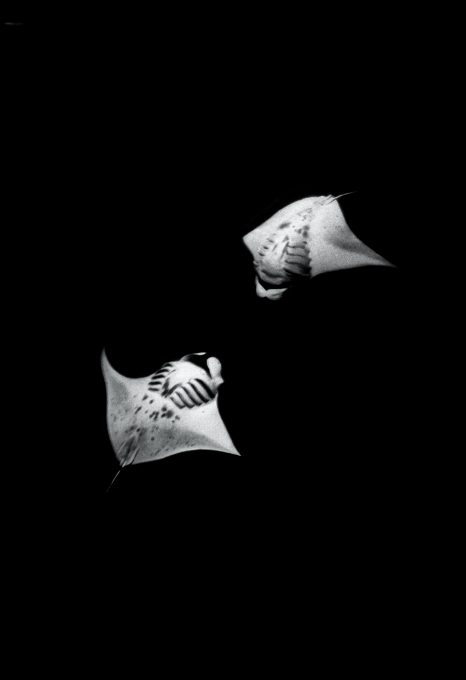 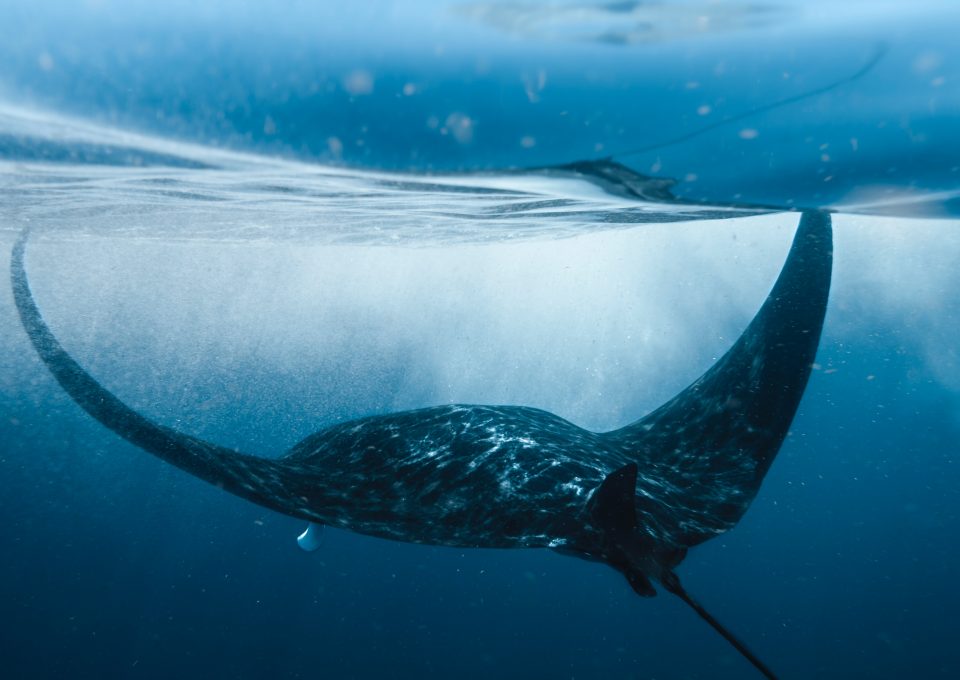 They slowly rise to the lights placed on the surface by the tour operators and feed from the attracted plankton. Adults can consume up to 66 pounds of food daily which make it clear that they feed whenever there is the chance. Giant mantas continually have to move, which is why they may roll at the bottom of the water to stir up different food sources or they may go in circles around a school of fish to get them to tighten up into a ball, so that they are able to successfully take in a large portion of it at once. With this spectacle they are offering tourists a unique close-up experience.

However, observed from a distance, it becomes clear that this ‘close manta ray encounter’, might be a little too close. Tourists reach out with their hands, grabbing the manta rays from all sides, screaming with excitement and even kicking the animal with their fins without realizing it. And as is so often the case, we, the humans, are the devils in this relationship.

Giant manta rays are an endangered species and little is known about the number of remaining animals and their reproduction. As they occur in tropical as well as sub-tropical waters and are found along coastal areas all around the world, they are difficult to track. There are only a handful of aquariums worldwide where giant manta rays are being held and in June 2007 the first giant manta ray in captivity was born at the Okinawa Churaumi Aquarium.

The female, 1,9 m wide, died only five days after birth, which shows how sensitive these animals are and that their living conditions were not met. In general mating can occur any time of the year if they have enough food and the water is a decent temperature for them. If they experience too much stress, the water is too cold, or they are struggling to find food then they will naturally stop mating for a period of time. Females only mate every second or third year, which makes it hard to increase the population.

As is so often the case, we, the humans, are the devils in this relationship. 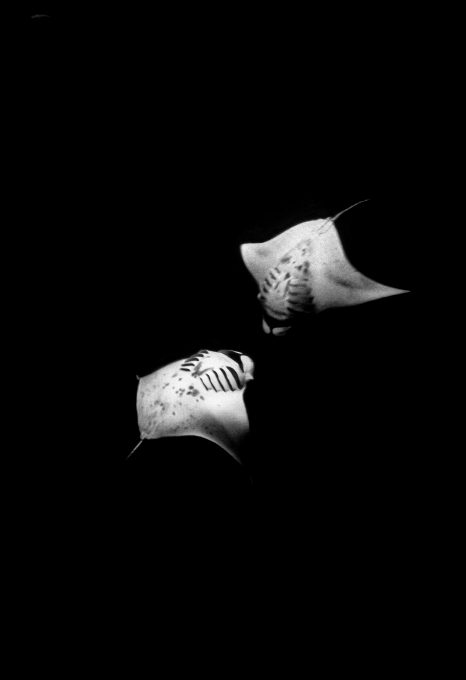 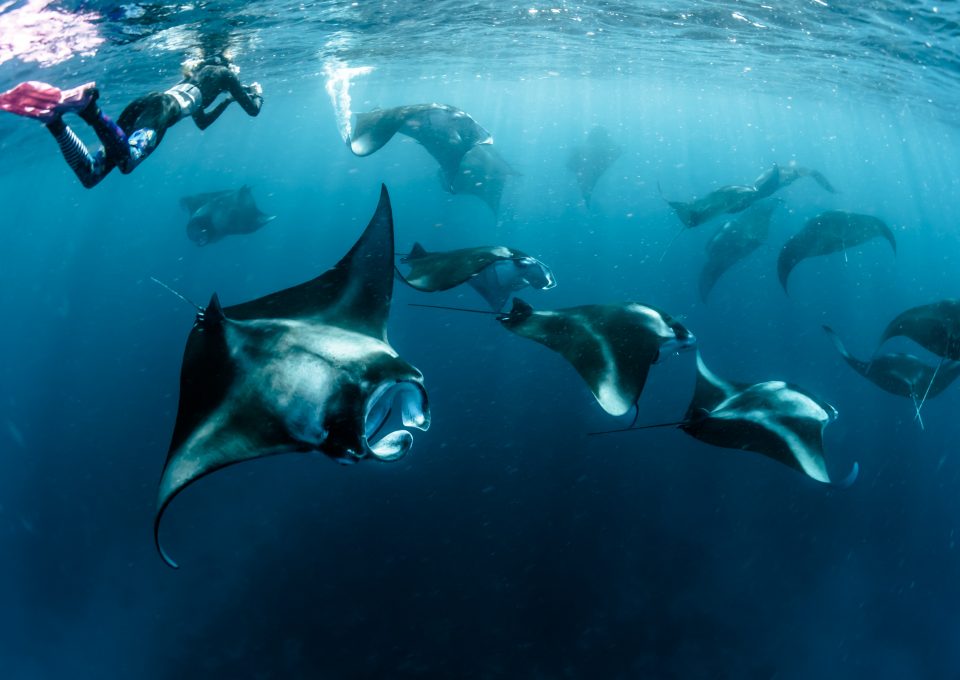 Taking this into account, the importance of protecting their natural habitat and ensuring them space seems self-evident. Entering their habitat and getting too close to them can cause enormous stress, which once again massively reduces the reproduction ability of these endangered animals.

The only natural enemies of the giant manta ray are a few shark species, such as the tiger shark. But humans pose an even bigger threat to the species. The biggest threat is fishing, as humans hunt the species for their gill rakers – especially in the Asian region. Mantas also often end up as bycatch in the nets and die. Luckily, in March 2013, a regulation of the manta ray trade was approved at the CITES Conference on International Trade in Endangered Species of Wild Fauna and Flora in Bangkok and came into effect on 14 September 2014, which massively reduced the trade and made it illegal. With the emerging interest in tourism in the form of manta ray encounters and the possibility to earn money with the animals, they slowly become increasingly valuable alive. Nevertheless, this trend is also to be considered critically and the attention and development of this kind of trip is to be focused on an educational and sustainable purpose.

With the emerging interest in tourism in the form of manta ray encounters and the possibility to earn money with the animals, they slowly become increasingly valuable alive.

Five years earlier, there were more manta rays in the water than people and the interest and protection of the animal was the primary concern. The willingness to pay more for such a unique experience primarily attracted people interested in the species and its protection. Now, with the prices for manta ray trips becoming cheaper, more and more people see this kind of wildlife interaction as a mere prop for their social media channels.

The comment of a captain “Next month we will have an even bigger boat, 49 people will fit on it and everything will go much faster and easier”, unfortunately makes it clear what this encounter meanwhile is about. The only ones who really have an influence on the development of these tours are the tourists, who should ask themselves if they really want to share their magic moment and unique experience with 48 other people.