Do you remember the first time you ever lay back into the ocean?

That pausing silence increases awareness of breath; you can almost hear yourself think. I enter that tranquil silenced sensation every time I dive. The moment my ears submerge, everything changes. My first shark dive changed not only my sensory perception of the world around me, but my perception of sharks entirely. The mysterious and elusive marine predator that the media has taught me to fear, suddenly had another side – one far more beautiful and mesmerising than I had thought imaginable. Through photography, I hope to capture that allure.

By day, I am an emergency room doctor. My mind is trained to problem solve, multitask, and calculate risk to make critical decisions in an environment of unyielding sensory overload. Though immensely rewarding, the challenges of emergency medicine bring with them emotional turbulence and burnout, exacerbated by the demands of inconsistent sleep-wake cycles. For healthcare workers like myself, 2020 brought the challenges of a new viral illness to our patients, which proved enigmatic both clinically and epidemiologically.

In medical residency, I was told meditation would help alleviate cognitive strain – “Just close your eyes and imagine yourself on a beach.” For me, that proved insufficient. I meditate with my eyes open, behind a dive mask, beneath the waves, with a myriad of sharks. If you have never experienced sharing a space with large marine animals, it must seem counterintuitive that shark diving calms me and resets my mind. Words and images merely skim the surface of the sensation.

I meditate with my eyes open, behind a dive mask, beneath the waves, with a myriad of sharks. 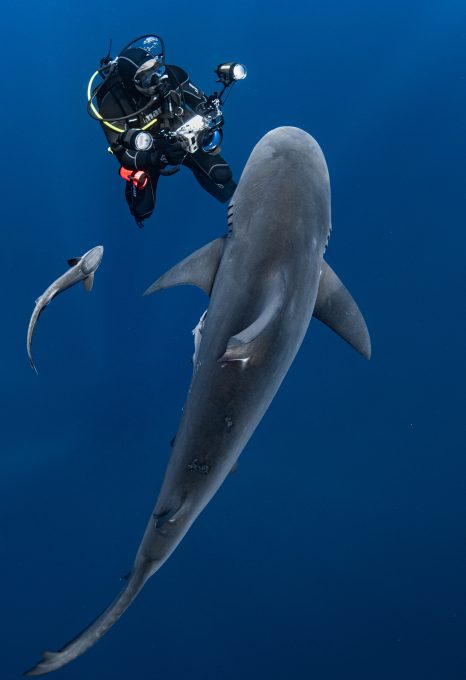 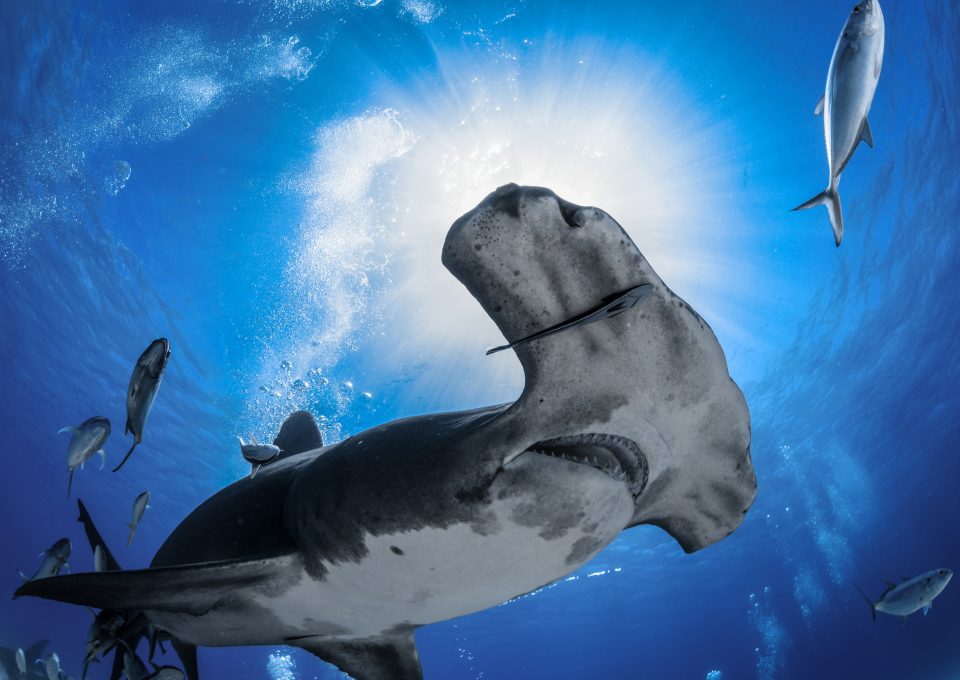 It was my first shark dive – the ocean was silent. I heard the slow steady inhalation of the dry compressed air and the rumbling of my regulator as I exhaled. I descended into a disorganised but somewhat calculated vortex of Caribbean reef sharks. I fell slowly, heeding a sense of zero gravity. My camera, which seemed to weight 20 pounds moments before, became weightless. From above, I watched an amorphous collection of fins and tails speckled among a homogenous canvas of blue and aqua. As I descended closer, the sharks’ true colours and textures revealed themselves. As if passing through a kaleidoscope, the crisp sun rays drizzled through the water and reflected off the sharks’ matte grey skin. Hydrodynamic and streamlined, dozens of the cartilaginous bodies made deliberate yet serene movements over the crisp white Bahamian sand. The sharks were self-assured and swam neighbourly among one another and the other divers. The sharks seemed to swim in a synchronised fashion, making them a delight to photograph. They looked different from every angle – and as a compulsive photographer, I had to capture every angle.

While being engulfed in a photogenic parade of small sharks, I saw several slow-moving shadows in the distance hovering along the edge of visibility. These weren’t small sharks – actually, they looked like submarines. They turned their bodies towards the scent of the bait, effortlessly. The largest shadow approached and I noticed that she was pregnant. Her massive head glided in slow motion directly towards me. A moment before reaching my camera, she turned. The opaque membrane protecting her eye descended and disappeared – she looked right at my dive mask. Locking eyes with a four-metre tiger shark was momentous, to say the least. As she coasted by me at arm’s length, I saw her gorgeous rippling stripes. My finest meditative moment.

I glanced at my dive computer – I’d been diving for nearly two hours. Two hours of a hypnotic natural menagerie of nurse, tiger, hammerhead, lemon and reef sharks. For two hours, I had intimately observed one of the few animals that survived multiple mass extinction events on Earth – 450,000,000 years of evolution. To the immense misfortune of these creatures however, in those same two hours, approximately 22,000 sharks will have been killed. Sharks are threatened on a global scale – 90% are already gone. Aside from habitat destruction, loss, and modification, commercial long line fishing and other unsustainable fishing operations kill unfathomable numbers of sharks as by-catch. Equally as upsetting are the millions of sharks that are purposefully caught, de-finned and discarded alive back into the ocean to suffocate slowly. It is my opinion that no animal deserves to suffer such a death. These slow growing animals reach a late sexual maturity and are at enormous risk of extinction. Aside from being inhumane and wasteful, shark fin consumption is likely neurotoxic, carcinogenic, and may have detrimental developmental effects for young and unborn humans. Recently published research demonstrates high levels of heavy metals in Bahamian sharks.

While being engulfed in a photogenic parade of small sharks, I saw several slow-moving shadows in the distance. 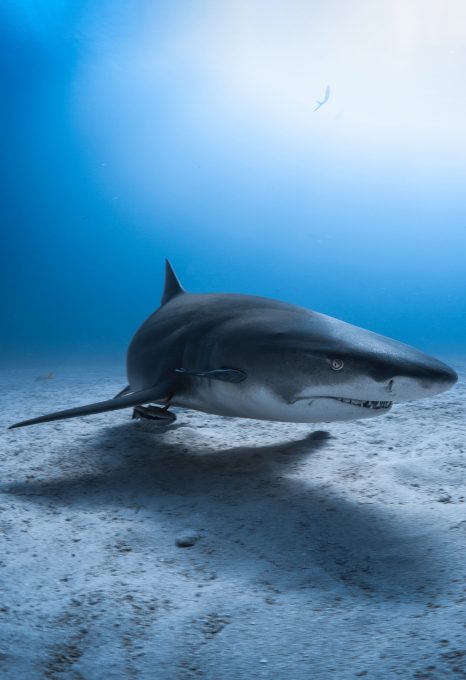 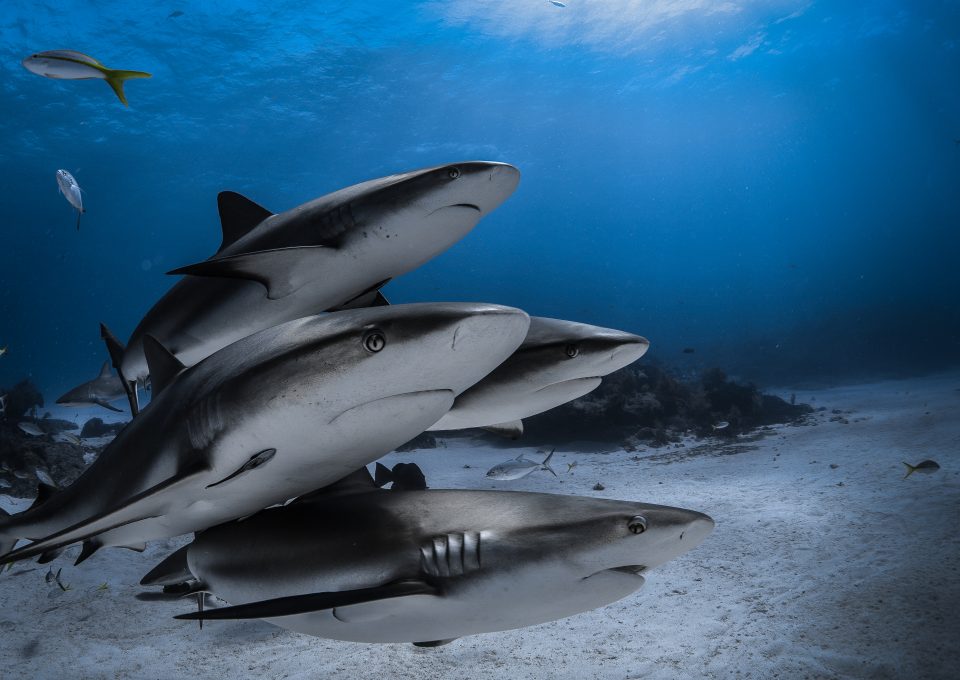 I attempt to capture the elegant beauty of these creatures to help transform trepidation and misunderstanding into respect and appreciation.

I care about these animals. But why should you? So that an adrenaline driven ER doctor can take photos of them? Far from it. Aside from being fun to hang out with and older than dinosaurs, sharks are unquestionably important for the health of our oceanic ecosystems both directly and indirectly.  Sharks maintain the fragile marine life equilibrium by controlling the geographic distribution and abundance of their prey. Sharks hinder overpopulation of large carnivore fish, thereby providing indirect protection of the herbivores that prevent overgrowth of algae and subsequent death of the reefs. Additionally, sharks prevent over-grazing of seagrass meadows, which serve as both a diverse plentiful habitat and a powerful carbon sink. In these ways, sharks help ensure future generations will enjoy our ocean’s diverse and productive marine ecosystems.

Conservation groups are taking action while sustainable fishing practices and fishery management measures are being implemented in some areas. Bans on the shark fin trade are all efforts to protect these animals worldwide are being fought for. On a local level, success stories such as the Bahamas Shark Sanctuary, an incredible Marine Protected Area (MPA), have benefitted Bahamian ecotourism by transforming the Bahamas into the shark diving capital of the world. MPA’s help the animals, support local sustainable fisheries, and are economically beneficial, especially over longer time periods. Unfortunately, certain shark species are highly migratory and an expansion of MPAs into a global network is necessary for long-lasting protection. Beneath the Waves, a shark and ocean conservation non-profit that I’ve worked with in the past, have published the first-ever assessment of the benefits of this MPA for large sharks.

As for me, I attempt to capture the elegant beauty of these creatures to help transform trepidation and misunderstanding into respect and appreciation so that future generations can observe, appreciate, and conserve our oceans.

For all images purchased, Atia donates 100% of the profits to ocean conservation organisations.

I attempt to capture the elegant beauty of these creatures to help transform trepidation and misunderstanding into respect and appreciation.