The Hawaiian monk seal is one of the most endangered seal species in the world.

It’s endemic to the Hawaiian Islands. There are approximately 1,400 left in the wild, and as many as 900 of them reside in the northwestern Hawaiian Islands. The rest of the population has taken residence in the main Hawaiian Islands, Oahu, Big Island, Kauai, Maui, Molokai, Lanai, Kahoolawe and Niihau. The Hawaiian monk seal was hunted to the brink of extinction in the late 1900s, but thanks to massive conservation efforts from NOAA (National Oceanic and Atmospheric Administration) and Hawaii Marine Animal Response (HMAR) the population has seen a slight increase in recent years.

Currently the Hawaiian monk seal suffers greatly from human pollution, entanglement in fishing gear and the ingestion of plastics, which commonly collect in the Northwestern Hawaiian Islands due to drifting from the main islands. They also suffer from habitat loss due to rising oceans and eroding atolls, this forces the pinnipeds to find different places to haul out and raise their pups.

A Hawaiian monk seal usually reproduces at the age of five or six years old. They will stay on land with them for around six weeks. During this period the mother will not eat or leave her pup. She must teach the pup everything it will need to survive on its own. After six or seven weeks, the mother will leave and the pup is left to fend for itself.  Pups are born at around 30-40lbs and will gain an average of around 5lbs a day. When it’s time for the mother to leave a healthy pup, it will weigh between 150-200lbs! Pups are born with black fur, but will change to a silvery colour usually by the time their mother leaves. Throughout their lives they will go through an annual shedding cycle called catastrophic molt. During this period of time, they will stay on land for around 10 days. A Hawaiian Monk seal can live for 25 to 30 years although it is very rare to find individuals who will live to this age in the wild.

A Hawaiian Monk seal can live for 25 to 30 years although it is very rare to find individuals who will live to this age in the wild. 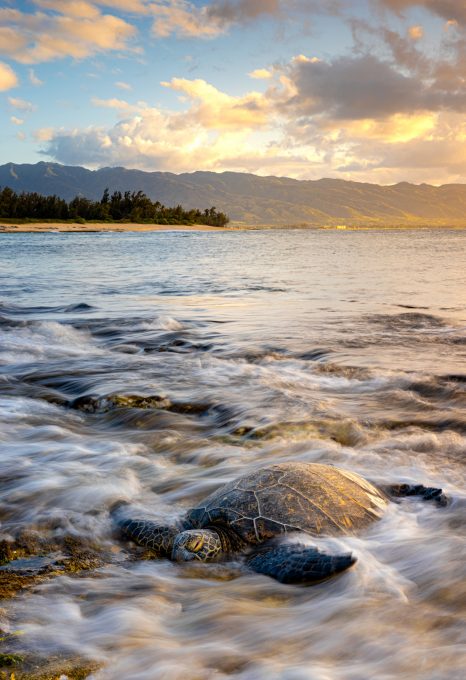 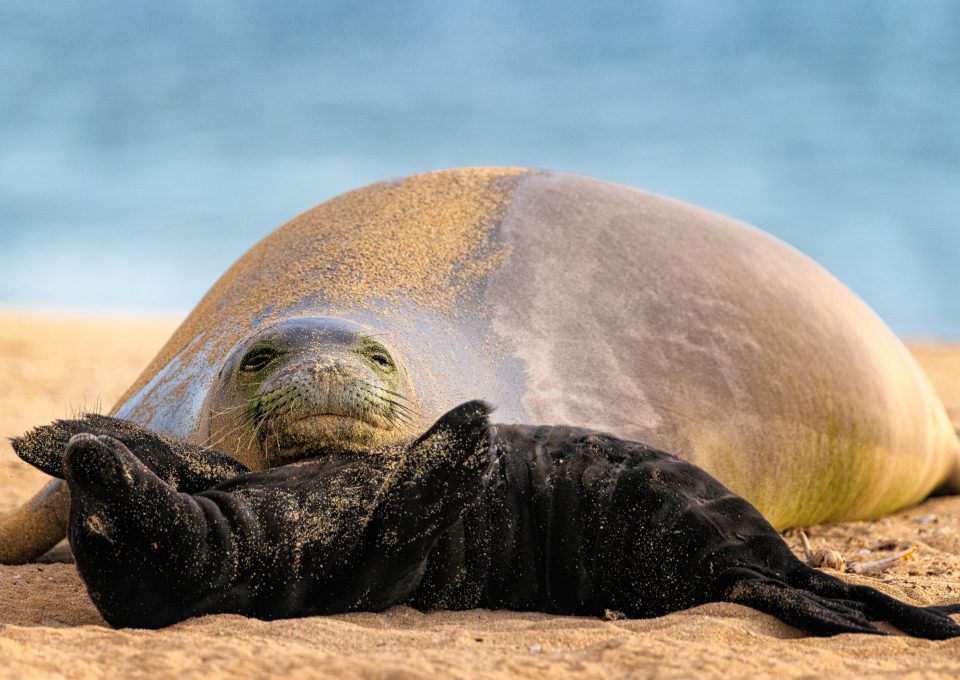 I have been photographing one monk seal individual named Kaiwi, and she is 10 years old. She was born on the east shore of Oahu and has had four pups, in 2016, 2018, 2020 and 2021. On April 26, 2021, she had a new pup, first identified as PO2. Once he was weaned, he received his Hawaiian name and fitted with identification tags. PO2 is now named Lōli’i, which means ‘relaxed, at ease, without worry and carefree’ in Hawaiian. What is unusual about this particular pup is that he was born in the heart of busy, down town Waikiki at the base of Diamond Head. The beach he was born on is referred to as Kaimana beach and is a very popular beach for both tourist and locals. Hawaiian monk seals are an endangered species so they have received special attention to ensure that human interactions are as limited as possible. Harassing a mother monk seal can lead to stress and cause mother to abandon her pup, ultimately diminishing any chance for its survival in the wild. They require around the clock monitoring by volunteers – HMAR and NOAA staff help ensure that human interference is not an issue. They also do an amazing job of educating the public on the importance of the species. Lōli’i and Kaiwi have been a pleasant attraction to many tourists who have now started showing up in the tens of thousands over the past few months as Hawaii slowly recovers from the Covid-19 pandemic. Many people have come to the popular beach to observe this rare species and their day-to-day activities.

I have been observing Lōli’i for the first three weeks of his life and have witnessed many milestones and his overall growth and development. He is very energetic, a quick learner, very curious and very affectionate with his mom. This will be my sixth documentation of a baby monk seal over the past six years. He has been a joy to observe while spending long hours on the beach, watching his development. I’ve photographed and documented several monk seal pups in the past but this one is special because I was able to watch him grow from day one, all the way up until the mother left. I hope this one makes it – it’s terribly sad to see a pup you watched grow up die prematurely.

Harassing a mother monk seal can lead to stress and cause mother to abandon her pup.

He is a very brave, curious and outgoing pup. After his first two weeks he started venturing to the ocean on his own. A worried mother was always there to scold him when he wondered too far. Kaiwi is a great mother she watched over this pup for 42 days, even though she was getting really skinny. Even on day 43 we had all thought she left for good and shortly after sunrise she came back to the beach to check on the pup before going back to the ocean to feed. The NOAA team have since relocated him to a safer and less crowded beach.

I enjoyed watching this pup, he was very active and affectionate with Kaiwi. I loved watching him learn to surf the waves! I have a few shots where he went out in high surf and got smashed time after time into the beach and the rocks but he kept going back out to try again. It was incredible to watch him grow up and master new skills.

Day after day I wanted him get stronger and swim in the ocean for longer. His mother protected him from all potential threats, including unruly people who venture too close to them and pet dogs let loose on the beach. Sadly, these human threats are all things this pup will have to learn to avoid, especially when he now lives in the middle of busiest cities in the state of Hawaii! With a whole island pulling for this little guy’s survival, he is a symbol of hope for his species. His presence in Waikiki has proven very valuable to his future.

During their time at Kaimana beach, volunteers and Hawaii marine animal response teams worked around the clock to close off large portions of the beach to keep people away from the seals. They also did a great job educating people who came down to see them.

He is a very brave, curious and outgoing pup. 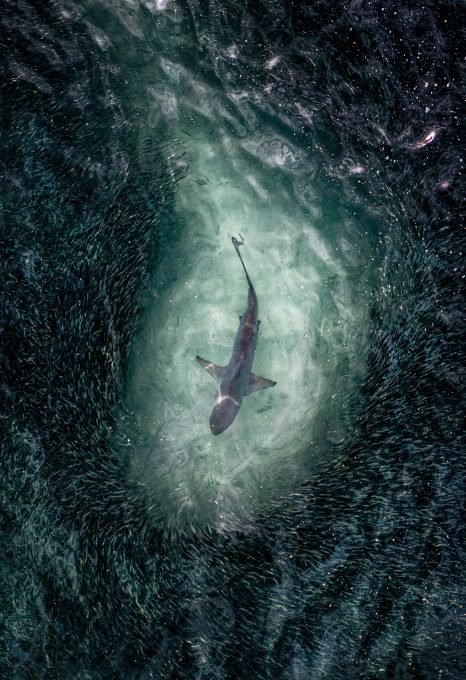 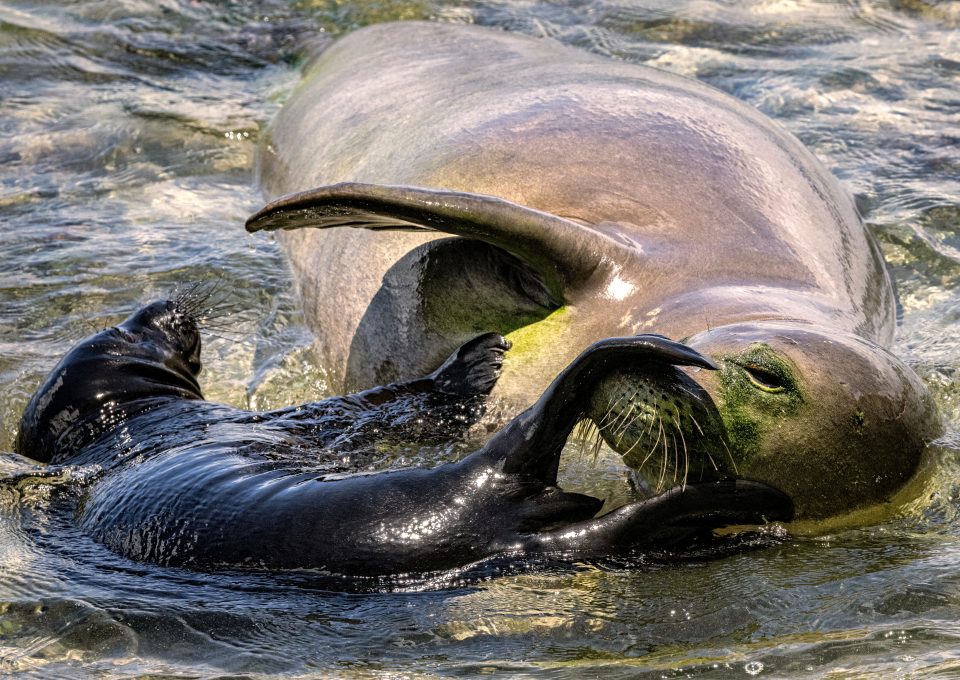 each one that survives is important in sustaining the species.

I think the biggest joy of photographing these monk seals are that they each have their own personalities and you can see how each one differs, each has their own instincts and mother and pup interactions are quite different among different pairs. They are Hawaii’s only endemic seal species so it’s quite interesting to watch their parental behaviors and comparing it to other seal species from other parts of the world. Watching the learning process always fascinates me, seeing how these seals pick up certain skills that only their mother can teach them, which are invaluable and key to their survival. What these individuals don’t know is how important they are to Hawaii and to their extraordinary species. With so few of them left on the planet each one that does survive counts towards the recovery of a species that remains on the brink of extinction. As an observer we always want to see the animals succeed! Sadly, not all do, serval seals that I have documented and spent numerous hours with over the years have died. It breaks my heart to see an animal that you have grown quite attached to suffer an unexpected and unfortunate death, most often as a result of human carelessness.

The Hawaiian Monk seal is one of the rarest pinnipeds in the global ocean, so each one that survives is important in sustaining the species. They help to keep local fish populations in check. Adults have few predators and are an apex predator in the Hawaii marine ecosystem. The only threat to these seals are tiger sharks and the occasional orcas that are sometimes spotted in the islands. The main threat comes from humans. The more people who learn about this species, a brighter future is on the horizon for them. The more protection and awareness we can give this species, our future generations will be able to enjoy these amazing animals.

each one that survives is important in sustaining the species. 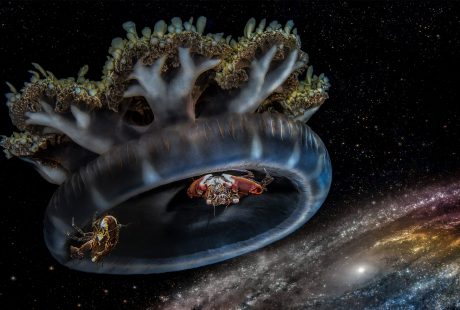 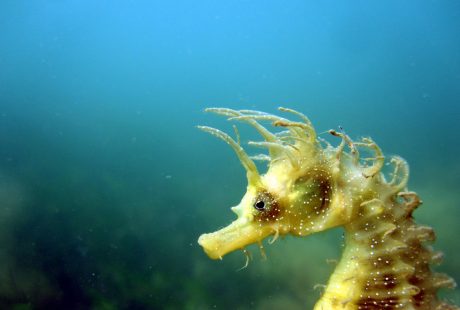 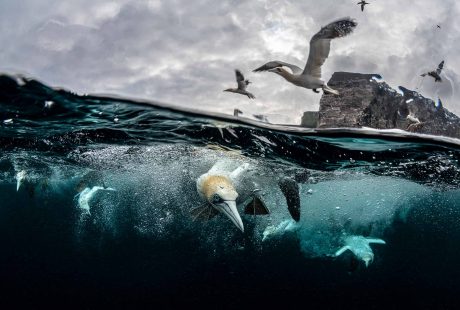 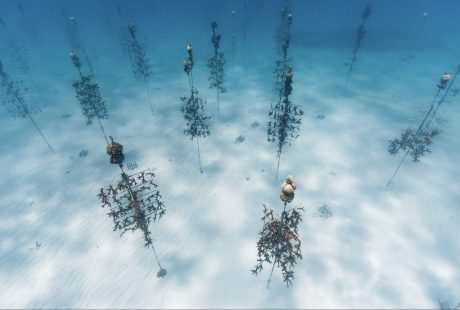