EACH DEEP HAS ITS UNIQUE CHALLENGES.

In the Atlantic, our first of the ‘deeps’ to conquer, it was the challenge of the unknown; at nearly 8,400m it was our first foray into extreme depth. In the Southern Ocean it was the weather and the sub-zero water temperature. In the Pacific it was the colossal depths; the ultimate test of the engineering and technology. The overarching challenge of our mission of ‘world firsts’ is that there is no template to follow. We’re making it up as we go along and learning by doing.

The primary goal of the Five Deeps Expedition is to place a manned submersible at the deepest point in each of the worlds five oceans; hence the name ‘Five Deeps’. We are on a 40,000 mile voyage around the world to dive in the Atlantic Ocean (Puerto Rico Trench), Southern Ocean (South Sandwich Trench), Indian Ocean (Java Trench), Pacific Ocean (Challenger Deep) and the Arctic Ocean (Molloy Deep). Along the way we are also diving the Tongan Trench, which is regarded as the second deepest trench on Earth, and also on the wreck of the RMS Titanic.

As part of the core mission we have three additional objectives. Firstly, we are using a prototype full-ocean-depth bathymetric sonar to map each of the trenches we are working in to provide surety we have established the deepest point in each trench and to provide 3-D navigational data. Secondly, we are conducting science wherever and whenever possible, then sharing our findings via a documentary series on the Discovery Channel and a book.

The expedition has been described by Dr. Don Walsh (Pilot of the Trieste) as “one of the most ambitious exploration expeditions of the century.” He makes an important distinction; this is genuine exploration rather than a thrill-seeking adventure. While there is a sense of adventure along the way, the primary purpose of the Five Deeps Expedition is to prove the effectiveness deep submergence technology and to explore the outer limits of the hadal zone. We tried to encapsulate this in our motto ‘In profundo: cognitio’… In the depths; knowledge.

This has been a mission four years in the making.

Step one was having the drive and determination to go out and do it. Victor Vescovo is our founder and funder; he had achieved the ‘Explorer’s Grand Slam’ and was looking for his next challenge. A lot of people can talk a good game, but Victor fully committed, put the money on the table and that’s where it really began. Today, Victor is our Chief Pilot.

Step two was the big one. This was developing a vehicle that can get you to full ocean depth and back again! Triton Submarines deserve all the credit for this as they have created a truly remarkable vehicle, a two-person, full ocean depth submersible rated for an indefinite number of dives. She is a pathfinder; the most capable submersible ever built. Her full name is DSV Limiting Factor, but we all call her ‘LF’.

We’re making it up as we go along and learning by doing. 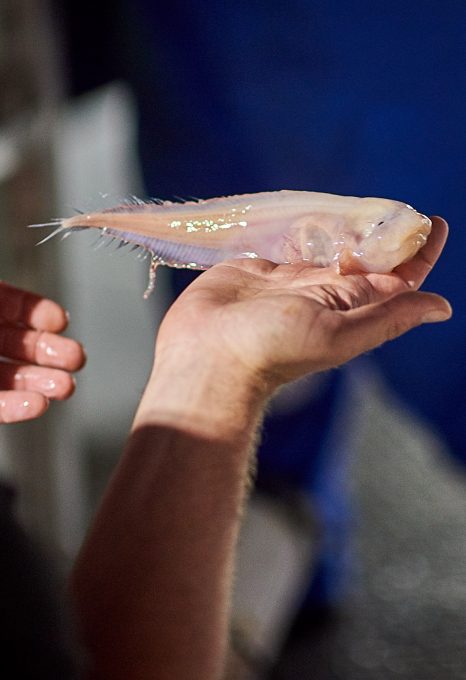 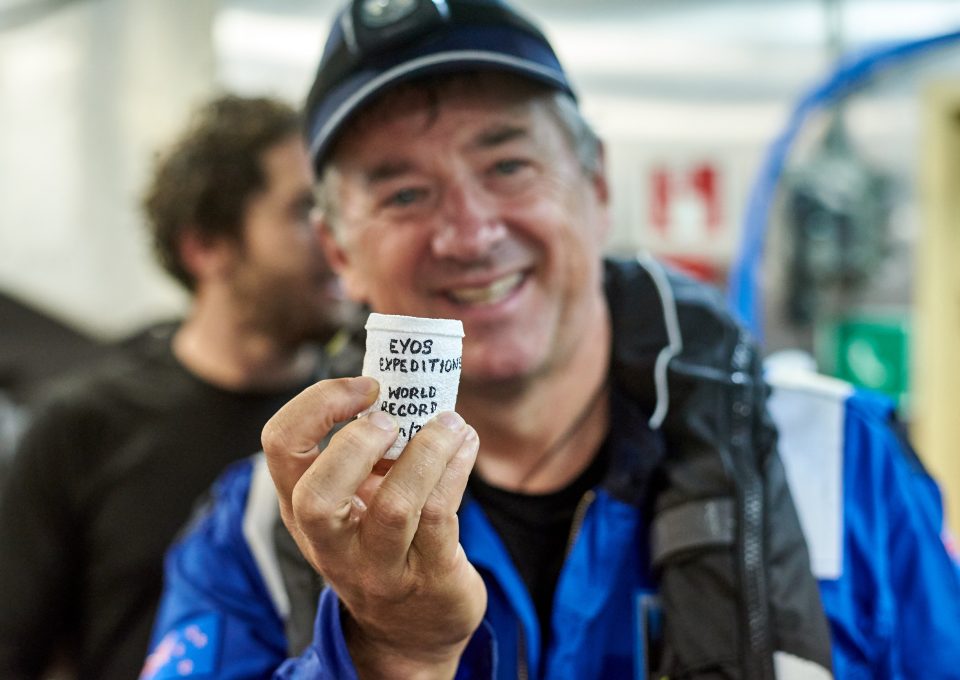 Step three was finding a platform to work from, so we refitted a 68m vessel (DSSV Pressure Drop) with facilities for the submersible. This included a full ocean depth sonar, ocean science facilities, a mission control, extra accommodation and basically everything we needed to underpin a global deep dive expedition. Perhaps the most important element is the team. We selected people for their primary skill-set, their experience and their ability to work as part of a team, but pure passion was key.

My own involvement has been as the primary mission planner and as the Expedition Leader, a role that Victor describes as being “the glue that holds all the elements of the expedition together.” I provide the holistic and objective overview and work with each of the team leaders to bring us together as a cohesive force. We have six core teams; the ship’s company, the sonar operators, the submersible technical team, the scientists, the film production team and the expedition logistics team.

For me personally, it’s about understanding what’s going on within each portfolio but more importantly, ensuring the interactions between them are harmonised. The essence of the expedition leader’s role is about managing energy. It’s my job to pick up the team when we have a technical setback and to hold them in check to avoid complacency when everything is running well. It means I get to make the hard calls. I’ve been called the chief cheerleader, the father confessor and ‘our mother hen’ by the team, and all are partially true!

On an expedition of this size, it is inevitable that there are complexities along the way, especially in the early phase. We had a lot of challenges in the beginning. We were breaking new ground every day but also breaking a lot of gear as well! Sea trials are normally seen as a testing phase of equipment, but they also test systems, processes and people, both individually and all together.

Without question our most important ‘deep’ was our first one; Puerto Rico (8,376m). This was our first foray below our sea trial depth of 5,000m and LF gained the record of ‘deepest diving sub in the world today’. It was also our first dive after ironing out a wealth of teething troubles during a lengthy sea trial process that included aborted dives, smoke in the cabin at 5,000m, and broken deck gear, as well as a physically and mentally exhausted team. We had a tough week onsite with inclement weather, systems failures and simple bad luck. We were left with one final day remaining. After months of hard training, grinding trials, heartbreaking failures and only stuttering incremental progress, this was our moment of truth. The dawn delivered a perfect day with an air of nervous anticipation. The launch was our smoothest yet, the descent passed all of the former ‘abort points’ and the sub descended smoothly and rapidly. A mandatory communications check every 15 minutes yielded excellent and steady progress and after three and a half hours, Victor called back, saying simply: ‘LF is on the bottom’.

It means I get to make the hard calls. 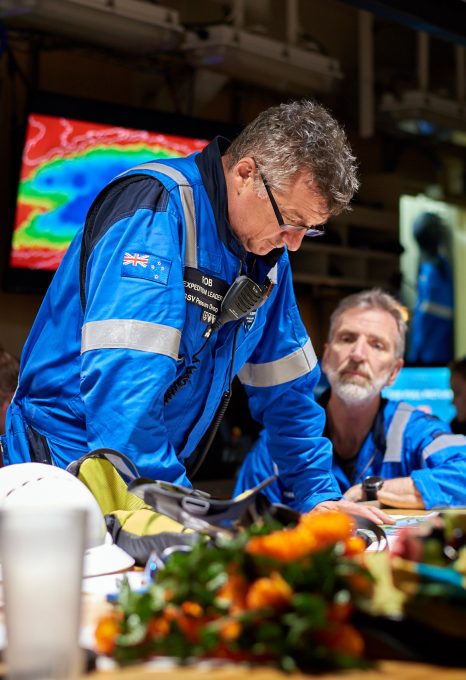 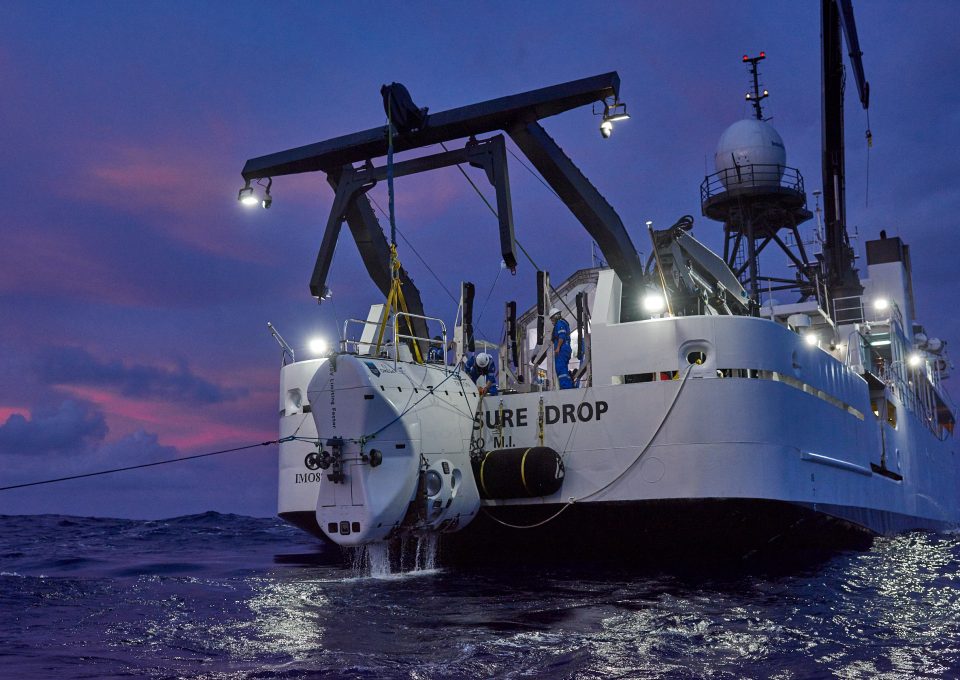 All seafarers understand the sharing of the highs and lows with shipmates, but the intensity of this mission means that those challenges (and subsequent bonds) are even greater.

All of us in Mission Control erupted into cheers and tears, while we hugged each other in an indescribable moment of joy. It was tempered with the fact the journey was only half-way done – we had to get Victor back home. Thankfully, the ascent went smoothly, and LF surfaced from a dark ocean with lights ablaze into a glorious sunset. The team worked with practiced precision, all moving in perfect harmony to bring LF safely back onboard. It was one of those days where everything just clicked, and it seemed like we had been doing this forever. It was more than just a ‘first’, more than a record – it was that we had proven the team to our toughest audience; ourselves.

Now, after nine months of operations and four deeps reached, we are operating smoothly as one large team with some hard-won experience, but still absolutely committed to learning on every dive. Things are running as well as we ever hoped they could do. All seafarers understand the sharing of the highs and lows with shipmates, but the intensity of this mission means that those challenges (and subsequent bonds) are even greater.

We have ended up with a vehicle that a lot of people will see as the pinnacle of submersible technology; the end result of a lot of very hard work by the designers, engineers and technicians, but I see her as more than that. I think she is a pathfinder to the exploration of Earths last frontier; the hadal zone. I see her as a prototype, a test vehicle, the first in a new line of submersibles that is accessible for non-government research entities, ocean science philanthropists, adventurers and anyone who might have an interest in visiting the Hadal zone.

When we complete the Five Deeps Expedition in September, the ship, submersible and all the accoutrements will be sold as one combined ‘Hadal Exploration System.’ It’s quite likely that it will go to a private buyer wanting to make use of what has become the most potent tool available to ocean scientists today. A lot of folks get excited about the world records and the new species we are discovering. While those are all very noteworthy achievements, I think our legacy will be the quantum leap in technology. Here, at last, is a vehicle that can take humans to any depth in any ocean, at any time and off virtually any vessel. She is going to have an amazing career and will completely transform our knowledge of the ocean and the creatures found in those colossal depths; a space craft exploring Earth’s ‘Inner Space’. That has profound long-term ramifications for our future ability to explore and understand the lower reaches of the world’s ocean, the powerhouse of our planet. I’m extremely proud to have been part of that.

All seafarers understand the sharing of the highs and lows with shipmates, but the intensity of this mission means that those challenges (and subsequent bonds) are even greater.