Kokoly: Fishing for a future

Kokoly: Fishing for a future

one person stood out: a small diminutive octopus fisherwomen from Lamboara.

Like millions of fisherwomen around the world, Kokoly relies on the ocean to live, as both a source of income and nutrition. With local fish stocks depleted and once vibrant reefs turned to rock, Kokoly’s life is now one of survival. In Issue 10 of Oceanographic, photographer Garth Cripps heads out with Blue Ventures to the fishing communities of Madagascar to discover more.

More than 100 million people in the global South rely on small-scale fishing for their livelihoods and food. These not so small small-scale fishers make up more than 90% of the world’s fishermen and fisherwomen. They fish in near-shore tropical ecosystems, which harbour a variety of marine life. But the lives of these people are ever more precarious. Overfishing, both by small-scale fishers themselves but also industrial fishing fleets, has greatly undermined the fishing stocks they rely on. Climate change, as the result of man-made CO2 emissions, is making the oceans hotter and more acidic, further diminishing sea life. At the same time, these coastal communities face rising ocean levels and increasingly extreme weather events.

Marine conservation organisation Blue Ventures works with small-scale fishers across the tropics to rebuild their fish stocks. With support from the Sundance Institute Stories of Change, I set out to document the challenges many of these small-scale fishers face. I teamed up with Paul Antion, Blue Ventures’s Outreach Manager living in Southwest Madagascar.

We decided to focus on fisherwomen. In most traditional fishing communities, women not only fish, but make and fix nets, and process and trade catches. They live from fishing, but most have no rights over their fisheries, and are often at the bottom of global seafood supply chains that drive overfishing. Research published in the late 1980s shows that fisherwomen in Oceana caught a significant part of the region’s marine food. The regular way they fished also made women more reliable providers of protein for subsistence than men. But more than 30 years on, the huge role of fisherwomen still goes largely unrecognised and often unpaid. 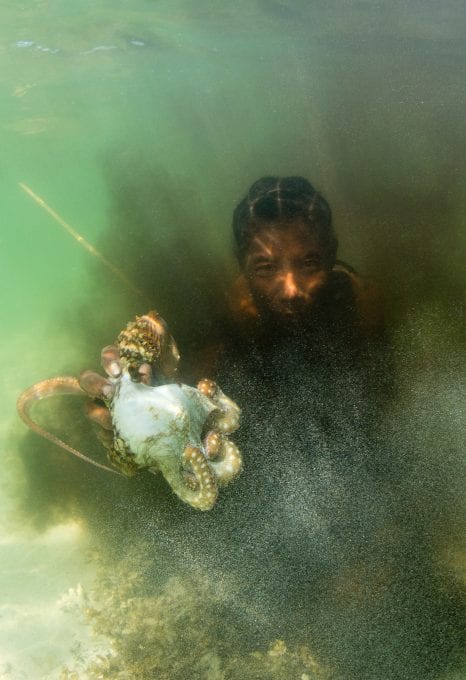 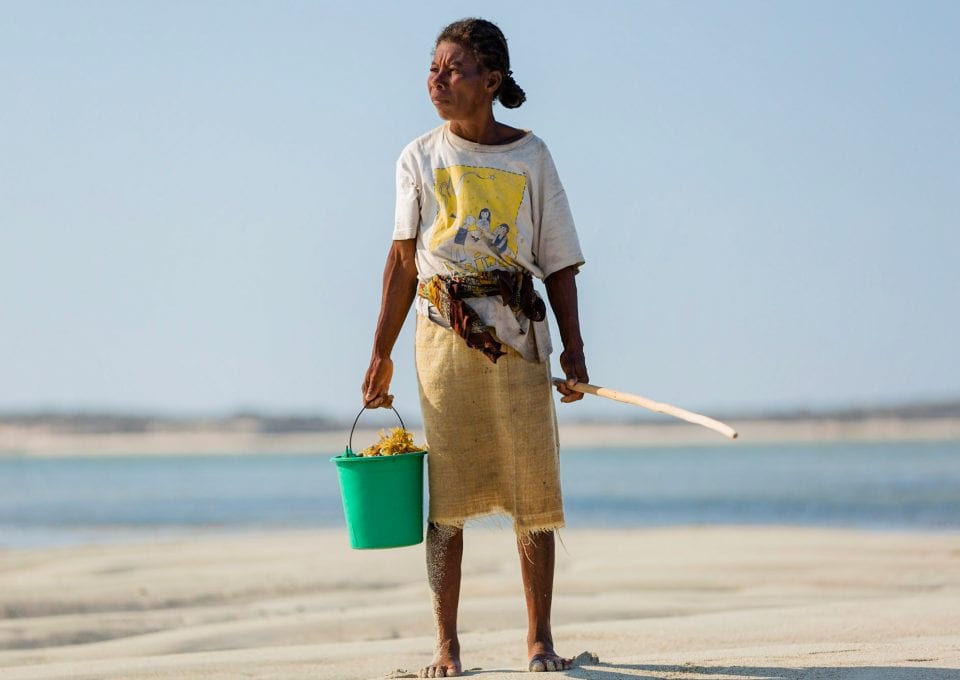 For a couple of weeks Paul and I travelled along the southwest coast – the homeland of Madagascar’s traditional Vezo fishing people – meeting and just talking to Vezo fisherwomen. We came across many strong characters and stories, including one woman who said “now that I have seaweed farming, I don’t need a husband anymore”, but one person stood out: a small diminutive octopus fisherwomen from Lamboara. Kokoly.

In October 2016, Paul and I began visiting Lamboara to document how Kokoly survived from the ocean. We spent hours picking our way over vast reef flats where Kokoly foraged for octopus, sea cucumbers and urchins. We paddled out to the edge of the barrier reef where she fished with a hand line. Some days we walked kilometres to the mangrove forests, where Kokoly gathered bait or cut mangrove poles to build her house. When the tide was low enough, Kokoly would tend her seaweed lines between fishing trips. We would be up at dawn as she went out to sea. Most days, as the tide came in and Kokoly returned from the sea, we’d shelter from the relentless sun in the shadow of a neem tree, where Kokoly’s extended family would gather to rest and chew the fat while they repaired nets and the women plaited each other’s hair. Kokoly told us, “God didn’t make me to sleep during the day. I have to keep working and doing something”. Our experience bore this out. When she wasn’t out at sea, she’d be salting fish, processing sea cucumbers or gathering tree resin in the forest (traditionally Vezo use resin from a euphorbia tree species to seal the hulls of their wooden outrigger canoes). As dusk brought some respite from the heat, Kokoly would go to the beach to repair her wooden canoe or clean her seaweed lines. If she had caught fish that day, she would gut them for supper, then feed her ducks. Each night, just before darkness fell, she would herd her ducks into their shelter for the night. Kokoly is the most genial and affable of people; Paul speaks Vezo fluently and the two of them got along like old friends. Their conversations were long and wide ranging.

you could sense a longing and fondness for a time when the sea was still alive.

One of the reasons Kokoly is such a skilled fisherwoman, and that she can do a lot of things at sea typically considered the reserve of men, is that she was one of five daughters. Her father, with no other men to help him, had to take the girls out to sea as soon as they were able. Kokoly’s father died when she was a teenager, and the women of the family had to look after themselves. Talking to Kokoly, you could sense a longing and fondness for a time when the sea was still alive, and she would go out fishing with her father: “When I went with him, we’d catch a lot of fish. We’d freedive and get all kinds of fish – unicorn fish, grouper, sharks. When we’d be freediving and we saw sharks we’d jump back into the boat because they bite. He’d get back into the boat and grab his spear, but first he’d say, ‘paddle, paddle but do be careful not to bang the paddle against the boat, it’ll scare him and we won’t catch him.’ So, we’d paddle slowly until we were close. He’d throw the spear and we’d get the shark. Sometimes two sharks, but our boat was too small so we could only fit one in the boat with the net and fish, so the other we’d have on a rope behind us.

“It makes me sad because there aren’t any more sharks, they were worth too much. What used to be so plentiful now you can’t find them anymore, like turtles or trevallies, there aren’t any. It was better, but now everything’s worth so much. It’s terrible, it makes me really sad. Everything’s difficult to find, what’s left is hiding far away, because they’re scared…”

Read the full article, Kokoly: Fishing for a future, in Issue 10 of Oceanographic Magazine – out now, available worldwide.

you could sense a longing and fondness for a time when the sea was still alive.