“In already strained or damaged reefs, corals may not have the capacity to recover from COTS outbreaks.”

In a collage of cultures, tradition, and science, tourism operators from Italy, Japan, and United States are joining forces with Kosraean government employees in a battle to save the coral reef from Crown of Thorns Starfish (COTS) – A species of sea star that has become overpopulated to the point that it is destroying the otherwise remarkably pristine coral reef.

On island time, the team trickles in and loads traditional baskets woven from palm fronds and filled with diving gear, vinegar, and large gun-shaped syringes onto a local resort’s boat. Usually reserved to take tourists on snorkelling and diving trips, today it is a marine conservation battleship. I am the only tourist aboard. In fact, I’m likely one of the only tourists on the island because the Coronavirus travel restrictions* have caused nearly all travel bookings to be cancelled for the foreseeable future.

This day, as the only tourist on Kosrae, I am inspired as a reporter by Mark and Maria, local resort and diving operators, and their passion to preserve and protect the coral reef. COTS is a species of sea star that is usually part of a normal healthy reef ecosystem in low populations, and is kept in check by natural predators. The COTS feed on the soft outer layer of corals at a rate similar to that of the corals growth.

Spikes in the COTS population – often called outbreaks – can cause damage to the reefs, but resilient reefs can recover within a couple decades. Outbreaks can even promote biodiversity by creating space for slower growing corals. It’s similar to how forest fires can be part of a healthy forest ecosystem. But COTS outbreaks, like forest fires, are becoming more frequent and severe because of climate change and human activity. In already strained or damaged reefs, corals may not have the capacity to recover from COTS outbreaks. It has been speculated that the cause of more frequent outbreaks is linked to an increasing phytoplankton population, the result of an influx of fertiliser or other pollutants that provide more food for COTS. Overfishing or destruction of the COTS natural predators may also contribute. Mark recalls seeing white spots on the coral left from COTS rapidly spread to the point that large patches of coral were left colourless and destroyed.

But COTS outbreaks, like forest fires, are becoming more frequent and severe because of climate change and human activity. 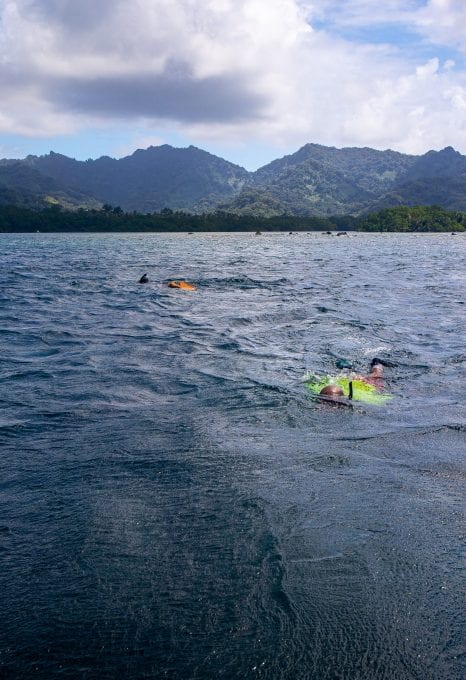 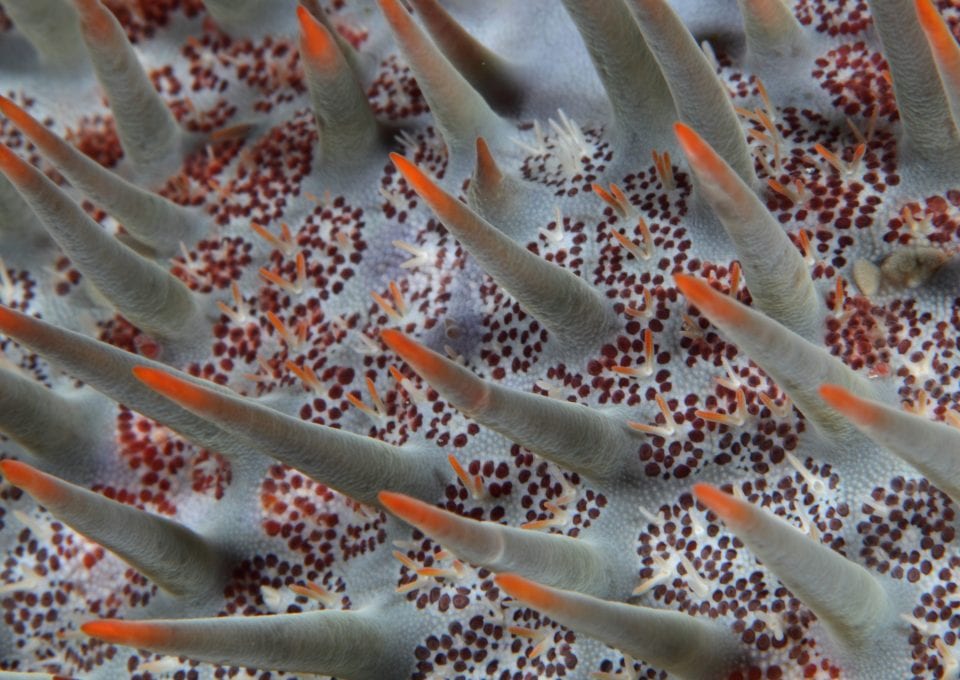 Kosrae is a small island state in the Federated States of Micronesia. Along with the Marshall Islands and Palau, the Federated States of Micronesia became an independent and sovereign nation in 1986 under a Compact of Free Association. As a former territory profoundly impacted by a history of colonisation and conflict between America and Japan during World War II, this relatively new country and its government are emerging, and the Compact provides funds and development assistance. In that context, a small, but vibrant tourism industry is developing. When you visit, you will see ruins from ancient civilisations, artefacts from Japanese occupation including networks of tunnels dug into the mountains, sunken ships, and destroyed tanks. You will see spectacular natural beauty from pristine coral reefs to canyon waterfalls and the extraordinary Yela Ka forest. You will also enjoy wonderful tropical fruits – including the Kosrae tangerine, which is found nowhere else in the world. Kosrae’s deep cool waters are well known by divers and marine scientists alike for vibrant coral that has been impacted less by bleaching events than many other regions with shallower waters more sensitive to temperature change.

With our entire ocean’s coral population in jeopardy due to climate change and pollution, protecting the reef in Kosrae is not just a matter of preserving the tourism industry for Mark and Maria. The conservation of these reefs is their passion, and they’ve found a way to support and share it with others through the medium of ecotourism. The observation may be best demonstrated by the fact that after my first day of vacation snorkelling in Kosrae with Mark, I was already engaged with the project and out with the team to observe and report on their project. Mark and Maria are avid divers with more than 30 years of diving experience in Kosrae between them. It was their independent and enduring love for diving that ultimately led them both here to Kosrae, which is where they met. When Maria arrived in Kosrae from Italy on a diving vacation she met Mark, who had already been operating the hotel and diving company for several years and joined him in managing the business. The couple both observed the COTS outbreak from the beginning and witnessed the growing destruction of the coral firsthand. They were compelled to act, so they initiated a project to manually remove the COTS in 2018 with the help of volunteers.

The first efforts involved prying the spiny toxin-filled sea stars off the coral and hauling them to the surface to be destroyed and composted. The process was difficult, labour intensive, and hazardous. They were also concerned that prying off the COTS could unintentionally cause the species to release eggs and spawn more. At the same time, they started looking into efforts in other regions affected by COTS overpopulation, particularly in the Great Barrier Reef. After some research, they found that chemical solutions were being injected into the COTS to destroy them – a process that would be much easier. However, the chemicals were expensive and difficult to acquire. They were also concerned as to whether the chemicals could have other unforeseen impacts on the marine ecosystem. With further investigation, they found out about a group in the early stages of an experiment using vinegar to destroy the COTS. The hypothesis was that the vinegar would change the pH of the starfish and cause them to simply dissolve within a day or two.

With our entire ocean’s coral population in jeopardy due to climate change and pollution, protecting the reef in Kosrae is not just a matter of preserving the tourism industry. 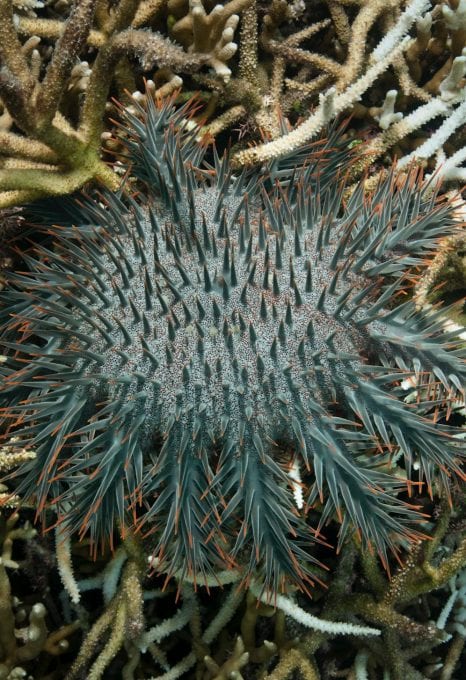 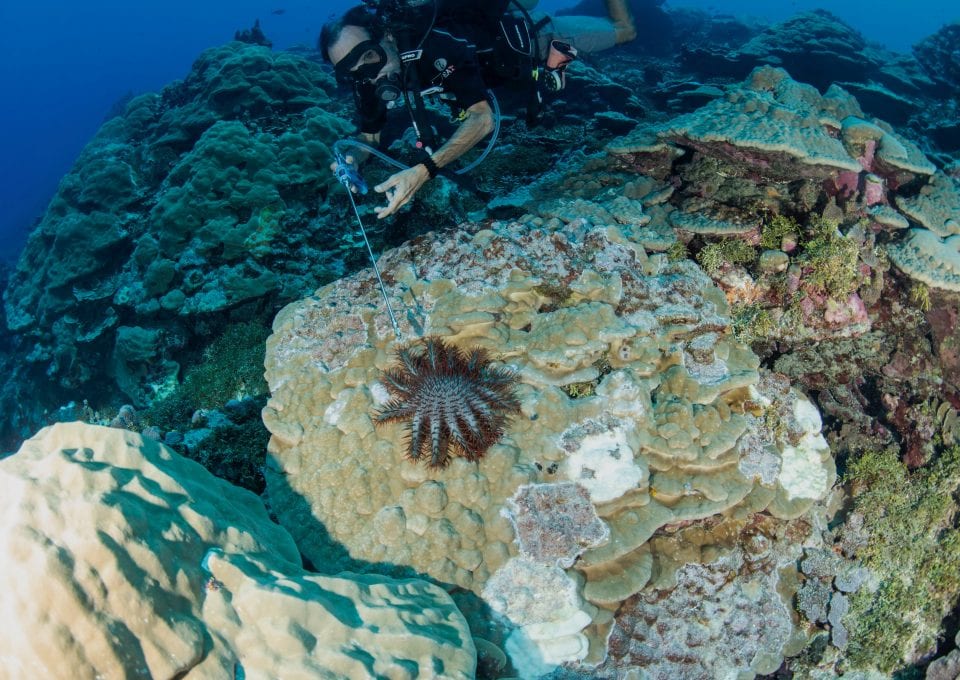 After some time, the divers start returning. Each proudly reports how many COTS they spotted and injected.

Rather than wait around for the results of that study, the team decided to test the process for themselves. With the help of an American volunteer who happened to be on holiday in Australia at the time, they acquired one of the devices being used to inject the COTS in the Great Barrier Reef. They rigged up the injector to a bottle of vinegar and began their experiment. After a few tests, they saw for themselves that the vinegar worked. Through the NGO that they had co-founded, the Kosrae Association of Tourism Operators or KATO – also the Kosraean word for beauty – the team applied for and received a small grant to purchase more injection devices and to pay divers.

For several months, divers have been visiting the outbreak sites, counting and injecting all COTS they find and collecting water samples. Today is their final outing. With Mark piloting the boat, we arrive at the first patch of affected coral and two Kosraean divers prepare their equipment. They dive into the water with their vinegar containers and injection guns, while three other divers paddle a kayak over to another area. Maria prepares her scuba equipment to both photograph the underwater endeavour and to collect water samples for analysis. Steadily, the whole team gradually disappears into the blue to complete their myriad tasks. I wait alone on the boat waiting for news from below.

After some time, the divers start returning to the surface. Each proudly reports how many COTS they spotted and injected. They all agree that they saw fewer COTS than last time. There is a strong sense of community and achievement among the team. It seems that their efforts have been a success and the COTS outbreak might be declining. However, data is still being compiled and analysed, and the publication of the final report is imminent. The water samples will be analysed to determine whether the outbreak may be related to a change in the nutrient contents or pH of the waters.  And if so, whether those changes are related to climate change or human activity in the nearby harbour.

The team has made an initial observation that the areas affected by the outbreak seem to have higher concentrations of ammonia and phosphate. However, if that nutrient loading were due to human activity, it should also be observed in the waters nearer to villages and fishing operations, but it is not. The waters nearer to increased human activity do not see the higher nutrient loading and have not been hit by the COTS outbreak. The research is ongoing, but so far there is no conclusive answer on what caused the outbreak, whether it is connected with increased nutrient loading and changing pH, or how those changes might be related to human activity and climate change.

Nevertheless, this feels like a victory, if only a small one, in an endless struggle in Kosrae and everywhere to save our oceans and our planet. When you visit Kosrae, be sure to go diving or snorkelling to see the spectacular coral reef. Do thank Maria and Mark at the Pacific Treelodge Resort, the Peace Corps volunteer who never left Carlos,  state forester Max, independent tourism operator Alex, Steve from Kosrae Island Resource Management Authority, Swenson from the Historic Preservation Office, the disaster specialist Alec, and everyone else involved. They’re working hard to make sure it’s still there when you arrive.

After some time, the divers start returning. Each proudly reports how many COTS they spotted and injected.