The season of flamingos

The season of flamingos

“I feel that it is our obligation to learn how best to protect the lagoon and the wildlife that resides there.”

The Greek island Lefkada is renowned for its seas, with its turquoise waters, natural landscapes and friendly inhabitants. One of its most fascinating features is the natural wetlands, which during the autumn and winter months, hosts the beautiful migratory flamingos. The lagoon of Lefkada is included in the Natura 2000 network, it is one of the largest wetlands of western Greece and is included in the list of wetlands international importance according to the Ramsar Convention. I was born and raised in Lefkada with the exception of the years I left to study. From a young age I spent many hours in the lagoon with my first camera photographing these magnificent birds. As a result, I now feel a close connection with the wildlife and the lagoon.

On one memorable occasion, I spent almost eight hours observing them in a single day. I tried to count the colours in their wings, listened to their distinctive calls and looked out for behaviour patterns as they all waded around together. I tried to figure out how they think, how they behave and how they perceive things around them. It’s fantastic returning over and over the see the black wings of the young birds turn slowly pink as they mature. These flamingos were the first animals that I photographed in the wild. Their unique behaviour sparked my passion for photography, for capturing nature in a split second, so I am eternally grateful to the flamingos for igniting my passion for this craft.

I tried to figure out how they think, how they behave and how they perceive things around them. 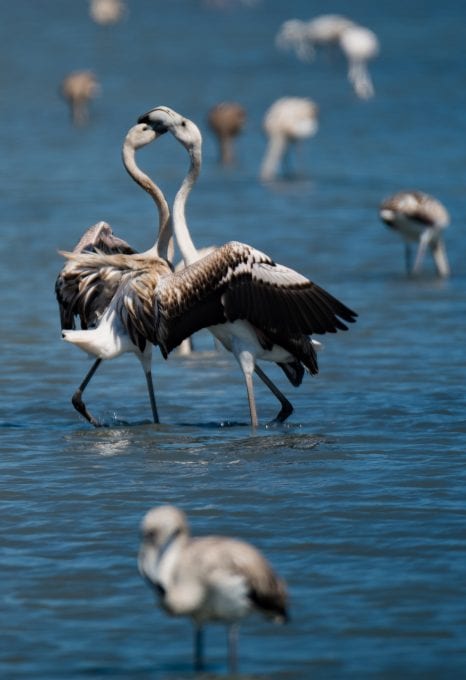 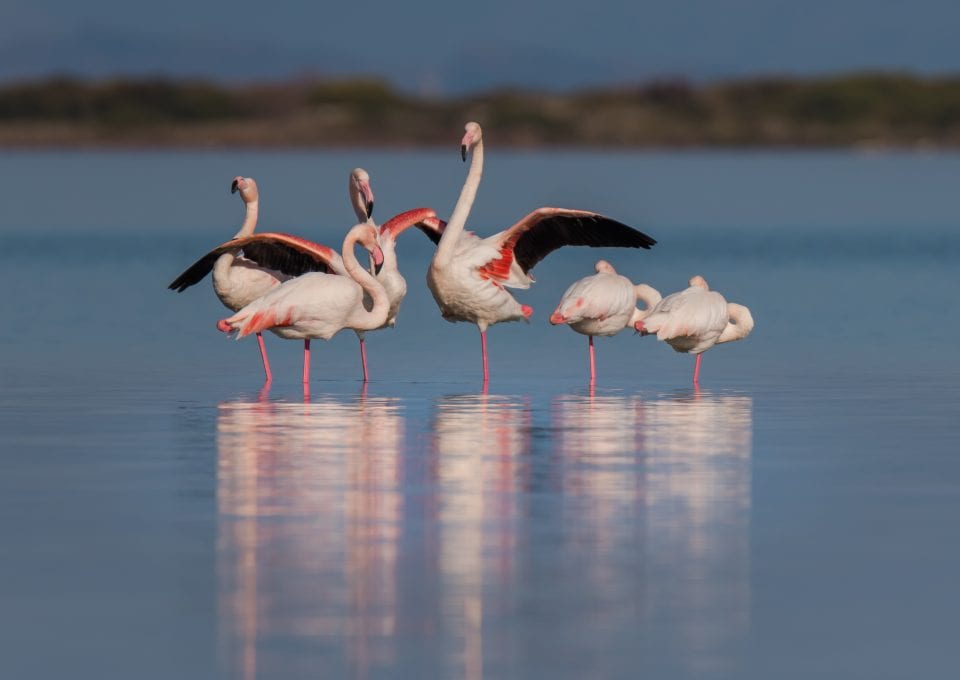 The Greater Flamingos (Phoenicopterus roseus) that visit the lagoon of Lefkada, are one of the six species of flamingos. They can also be found in the wetlands of the coastal countries of the Mediterranean, Africa, the Indian subcontinent and the Middle East. On average they have a length of 120-140cm and they can reach a height of up to 187 cm. Like all flamingos, it feeds mainly on shrimp, algae and aquatic plants.

Flamingos start to migrate to Lefkada – predominantly from Africa – from the beginning of October, though in recent years they have been migrating later in November due to the heat, as the lagoon has faced drought. They stay on the island for about five months, depending on the weather. The flamingos prefer a rainier winter, so the lagoon stays well-stocked rather than drying out. The flamingos, after they leave their nest, live all together, creating huge colonies. Despite the fact that there may be gathered of more than 30,000 birds, the young flamingos are only fed by their parents, who distinguish them from the squeaking of their voices.

With regard to their appearance, their feathers boast numerous different shades of orange and pink. This is because of a natural pink dye called canthaxanthin that they obtain from their diet of brine shrimp and blue-green algae. This makes them some of the most elegant and distinctive birds of the wetlands environment. They can drink water at almost boiling temperature, from springs, geysers and lakes. Particularly hard skin and the height of their feet protects them from burns. They sleep standing on one foot in shifts, while the others keep a look out for predators.

Flamingos prefer a quiet and private habitat, hence why they often choose fairly inhospitable lakes to reside in. They seem to seek out waters with elevated levels of salt, where little grows and water is unsuitable for other wildlife. They have the ability to excrete salt through glands in their nostrils, removing salt and eliminating it from the nasal cavity. When they appear in the lake of the island, they are isolated in places away from the land and from prying eyes. 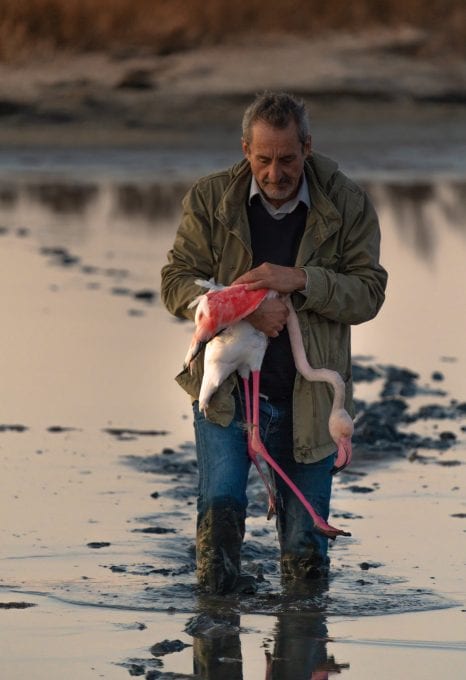 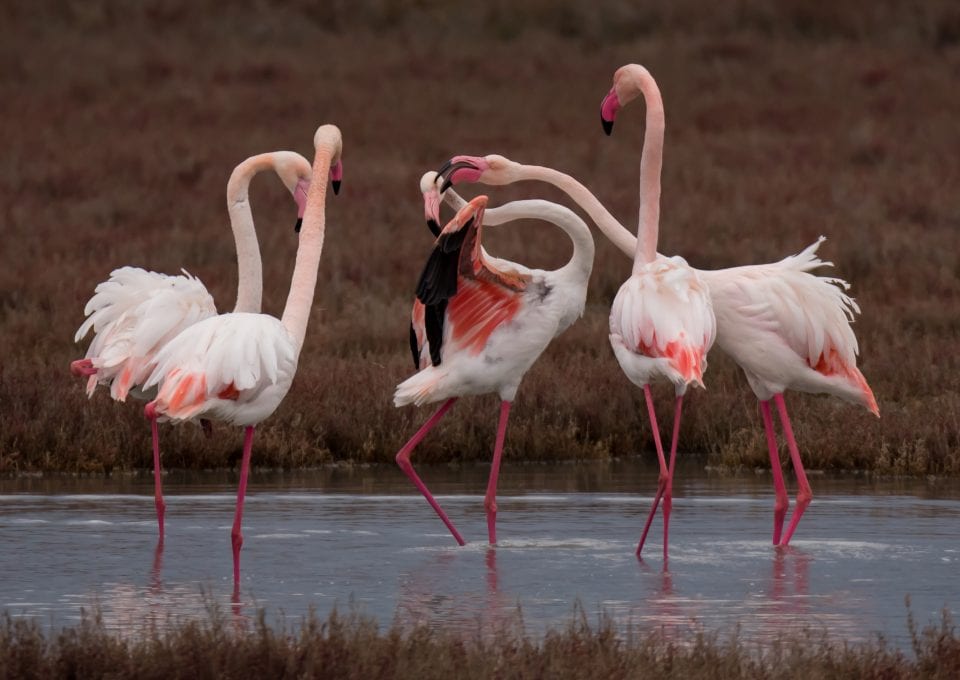 I saw that the flamingo was standing still and couldn’t move or fly even though it was trying with great effort.

One morning, I was alone with my camera on the lagoon. Suddenly I heard a flamingo calling out somewhere nearby to where I was sitting on the shore, so I rushed to find it. I hid myself in some bushes and I saw that the flamingo was standing still and couldn’t move or fly even though it was trying with great effort. Something was wrong and after looking through my camera with a zoom lens I saw that a fishing net was tangled in its leg and wings. I quickly phoned an Athens-based wildlife non-profit to get information and advice on how to deal with the issue. Then I called the mayor of the city, Charalampos Kalos, who happens to be one of the best vets in the area so he could come to the flamingo’s aid. We were trying to figure out how to get in to catch and help flamingo. It’s not easy because it’s got muddy ground that sinks, and you can get stuck in there very easily.

Eventually after a lot of effort he managed to catch the poor bird so that he could bring it out to the shore. He carefully removed the netting and checked to see if it was injured at all. Bizarrely, the flamingo didn’t struggle from his grasp, but sat still while he cut away the plastic. It was like it knew that we wanted to help and that moment produced one of my favourite photographs. Thankfully, the flamingo was not injured and when we left it free after a little run it got back to the lagoon, after a while it flew to the rest of the flock to eat and find his strength again.

Aside from the natural causes and predators, which are far and few between, man is often responsible for threats to the flamingo, either through waste and contamination of their natural environment, or in the attempt to capture or hunt them. The lagoon of Lefkada is listed as a protected area with particular ecological significance.  As a resident of Lefkada, I feel that it is our obligation to learn how best to protect the lagoon and the wildlife that resides there.

I saw that the flamingo was standing still and couldn’t move or fly even though it was trying with great effort.