If you’ve never encountered a leopard shark, they are, in my opinion, one of the prettiest.

As a scientist, I have been pulled up before for using the word ‘pretty’ but, I do think that in the case of the leopard shark, it is an appropriate use of the word. As juveniles they are black with white stripes running along their body, leading to their official common name ‘zebra’ shark. However, as they progress towards adulthood, the lines morph into spots, and their colouration lightens leading to another commonly used name, the leopard shark. This is undoubtedly the name used most frequently outside of the USA (where confusingly another species of shark also known as a leopard shark resides), and common names for fish and sharks vary enormously, not only internationally, but regionally and sometimes even locally. Even official scientific names change, the leopard shark was known, until last year, as Stegostoma fasciatum, but then, due to reasons we won’t go into here, the scientific name was changed to Stegostoma tigrinum, just to confuse things a little more. The debate about both common and scientific names is constant and always evolving but, for this story, I will stick with the common name I have always known them as, ‘leopard shark’.

Leopard sharks are found throughout the Indo-Pacific region. They are currently classified as ‘Endangered’ on the International Union for Conservation of Nature’s (IUCN) Red List of Threatened Species, mainly due to overfishing of the species. It is the only member of the family Stegostomatidae and, its closest shark relative is the colossal whale shark, another favourite of mine.

As adults, leopard sharks grow to approximately 2.5m in length. They possess a rasping jaw plate evolved for crushing their crunchy crustacean prey. Their skin is thick and armoured with teeth-like formations called denticles. They are a very docile shark and, as they are built like a small armoured tank, they possess little fear of anything, even humans. They don’t seem to have an aggressive bone in their body, and if they do, I certainly have never seen it. Although, I guess if you are a crab, your perspective on this may be very different. I refer to them as the Labradors of the shark world, and they certainly are a joy to encounter in the wild. Sadly, their choice of coastal habitat and lack of fear make them vulnerable to fisheries and because of this, wild encounters are becoming rarer.

My fascination with the leopard sharks, started in 2006 when I took on the position of Assistant Curator at the Burj Al Arab Aquarium in Dubai, UAE. On my first day of work at the aquarium, I was introduced to my very first ever leopard shark, affectionately known as ‘Zebedee’. Being a marine biologist, I had dived all around the world for work, but, I had never been lucky enough to encounter a leopard shark in the wild. Zebedee made me smile every day at work. She was already trained to take food from a stick; feeding her was my favourite part of the day.

They are a very docile shark and, as they are built like a small armoured tank, they possess little fear of anything, even humans. 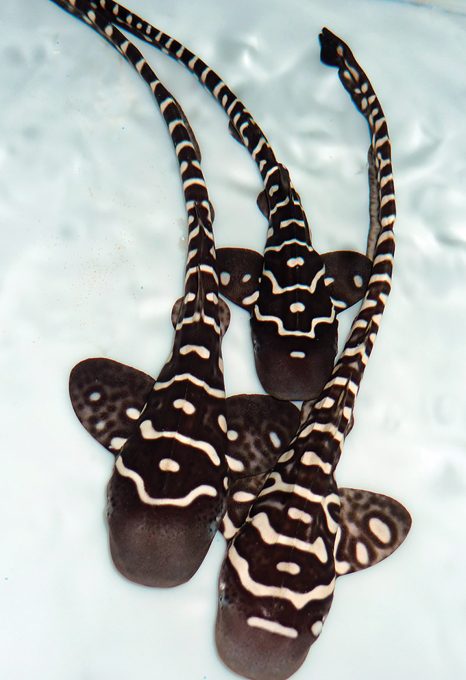 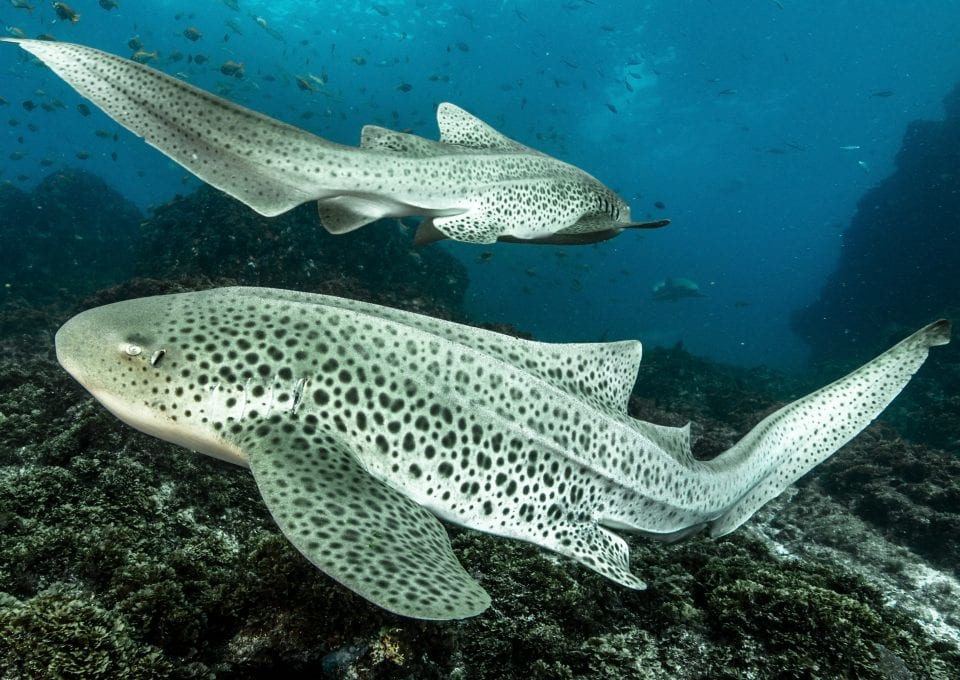 In 2006 Zebedee started to lay eggs in the aquarium but, as there was no male, the eggs were considered unviable and discarded. I then read an article about a female bonnethead shark in the USA that had reproduced a viable pup on her own, with no genetic contribution by a male, a process known as parthenogenesis. After reading that article, the decision was made to keep the next batch of eggs. In 2007, Zebedee started laying eggs again, and we kept the eggs safe in one of our quarantine units. After a few months, the eggs were examined, and to our surprise, three of the eggs had developed embryos. Extremely excited by this discover, we teamed up with a local geneticist to try and prove that what we had discovered was in fact, the first example of parthenogenesis for the species.

At the time, parthenogenesis had only been seen in captive animals, but now it has also been seen in wild populations, including the elusive sawfish. Parthenogenesis can take place in the absence of male genetic input and embryos develop from an unfertilised egg. The amazing thing about this process is that the resulting offspring are all genetically unique, unique from the mother and genetically unique from their siblings. The resulting offspring are therefore not clones as they are not genetic copies of the mother but, they are known as parthenogens.

We expected a higher level of mortality for the parthenogens as they are less genetically diverse than normal, sexually reproduced offspring. Of the three eggs that developed embryos in 2006, one hatched and survived for a period of 80 days. In subsequent years, as we learned how to care for the parthenogens better, we had a better rate of survival and some are now fully grown and at almost reproductive age themselves. This discovery lead to a paper published in the Journal of Fish Biology in 2011 and titled ‘Annually recurring parthenogenesis in a zebra shark’. Zebedee produced eggs every year until she was moved to a larger facility in 2012. Some years she would lay upwards of 50 eggs and each year parthenogens were produced. All of Zebedee’s surviving offspring were registered in the European leopard shark studbook and moved to aquariums throughout the Middle East and also to the UK. This was a fascinating discovery and one that increased my passion not only for leopard sharks, but all sharks.

In 2018, my partner and I left Dubai and, with our golden retriever in tow, headed to Australia to start a new life. Before landing in Australia, we were in talks to buy a local dive centre in Byron Bay known as Sundive. Byron Bay is a coastal town situated in northern New South Wales. Offshore is the Cape Byron Marine Park, the centrepiece of which is Julian Rocks Nguthungulli Nature Reserve. Julian Rocks is a fantastic site to dive or snorkel with a wide variety of both tropical and temperate marine life to encounter. Throughout the year, ‘The Rocks’ are exposed to temperate water in the winter and almost tropical waters in the summer; it is during these warmer months (December to April) that leopard sharks aggregate in large numbers.

After a few months, the eggs were examined, and to our surprise, three of the eggs had developed embryos. 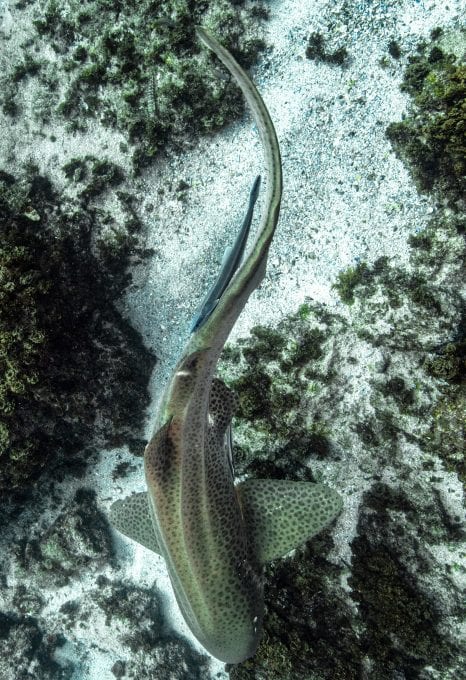 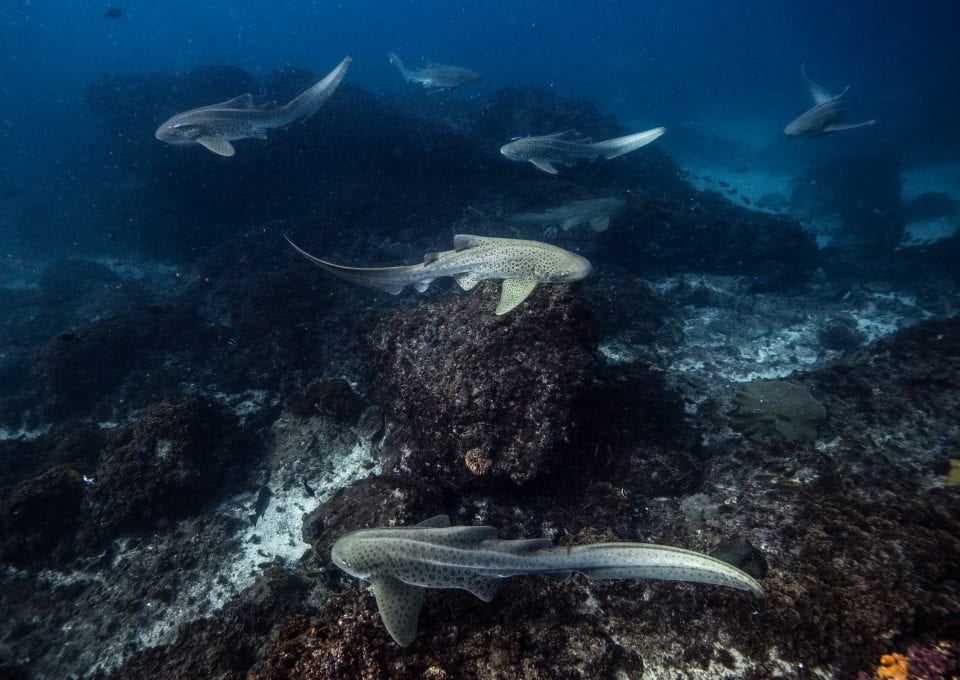 Although I had heard that Julian Rocks hosted an aggregation of leopard sharks in the summer season, I wasn’t prepared for just how amazing that aggregation is.

We arrived in Byron in the winter, and although I had heard that Julian Rocks hosted an aggregation of leopard sharks in the summer season, I wasn’t prepared for just how amazing the aggregation would be. Taking over ownership of a dive centre was a steep learning curve, and for the first couple of months, we were busy with bureaucracy and paperwork and found little time to dive. However, in February, one of my team told me to ‘get out there’, and so I did. After descending on my first dive, I was amazed to find myself surrounded by dozens and dozens of leopard sharks. There were so many sharks, I forgot my researcher side and watched in absolute awe.

After returning to shore, the excited researcher in me woke up, and I started to gather information on the leopards and the aggregation. To my surprise, little data was being collected at Julian Rocks, and so with the support of the Cape Byron Marine Park, I decided to start the ‘Cape Byron Leopard Shark Project’. The project is a similar structure to my ongoing citizen science whale shark project, Sharkwatch Arabia, which aimed to gain information from seafaring individuals about any whale shark encounters they might have had. The amazing team at Wildbook created a page for leopard sharks, which allows individuals to upload any encounters they have of leopard sharks, not only at Julian Rocks but anywhere in the world. There are currently research teams in Eastern and Western Australia, Thailand, Indonesia, Oman and Mozambique contributing to Wildbook for leopard sharks, and this is growing all the time. The Cape Byron Leopard Shark Project aims to find out more about the ecology of these sharks that frequent Julian Rocks and why they do so in such large numbers. I can confidently say that Julian Rocks is host to one of the largest aggregations of leopard sharks currently known, it is a spectacle to see.

It was completely unintentional that we move to a location with so many leopard sharks but, I’m delighted that I get to continue my work with these charismatic sharks. The great thing about citizen science is that it involves everyone, especially the local diving community. Anyone can contribute to the project by simply uploading a photo of a leopard shark to Wildbook. Every contribution helps us to build a better picture of the leopard sharks’ local ecology.

The 2020 aggregation was to be our first solid data collection season. However, this year didn’t turn out as planned, not only for us, but most researchers around the world. It’s now winter, and we are busy with the equally impressive grey nurse aggregation but, I am looking forward to the warmer months when the leopard sharks return. In the coming years, I am hoping to expand the project up and down the east coast and get more dive centres involved, some of which have been very supportive already. Hopefully, with long-term research, our data collection can cast some light on the leopard shark’s local ecology and, possibly aid in the protection of this loveable spotty fish.

Although I had heard that Julian Rocks hosted an aggregation of leopard sharks in the summer season, I wasn’t prepared for just how amazing that aggregation is.