Inuit life: Between tradition and modernity

Inuit life: Between tradition and modernity

The twin-engine Fokker 50 thrust its nose into a wall of cloud. Everything turned grey.

The sound of the engines seemed to amplify as senses shifted, the hum of the plane a more valuable orienting tool than the visual nothingness that lay outside. The six passengers around me peered expectantly through their respective win­dows, waiting – with impatience – for the clouds to part. Each of them hoped to see land below. When the vast, dense blanket of grey did eventually subside, it was replaced by an endless white, an immense expanse of pack ice. Mountains rolled into view, wind chasing snow from their peaks, neighbouring ridges connected by vast expanses of frozen water. I turned to one of my fellow passengers and grinned: “Greenland”.

The dense cloud from which our plane had escaped caught up with me not long after landing. Having been welcomed to the village of Tasiilaq by the Inuit of Kulusuk, shrieking winds rolled in after me, channelled between the great ridges that surrounded us. For several days we were buffeted by a 160kmph blizzard that shook walls and buried snowmobiles. The poor visibility kept us – Angani, my Inuit fixer, and I – marooned. As we bunkered down inside, I was given my first glimpse of how the modern world’s great comforts have made their way to this forgotten corner of the globe: soft sofas, branded sodas and, most importantly, HD TV. Peering out through a window, wind rattling its panes, I encountered a scene unchanged for generations: sled dogs motionless in the snow, winds swirling around them. They stayed that way for days, unflinching, conserving energy, waiting for the winds to dissipate and their master to call the hunt.

Eventually, the storm passed and the spring sun returned. It had arrived long before I had, Angani told me, melting much of the sea ice earlier than usual. With sun reflecting brilliantly off the surrounding snow once more, the hunt was on. Angani introduced me to his dogs – quick, obedient and an integral part of the community. They howled with delight as their master approached. We climbed aboard the sled to which the dogs were tethered and, with a flick of Angani’s wrist, a rippling command sent from man to dog, we pulled forward. Eager to move after days of rest, the dogs quickly built up speed. We headed into the white, purposefully, the coloured walls of Angani’s village swallowed up by the wilderness behind us.

Angani’s voice has a hollowness in the cool air, drowned out by the space around us. 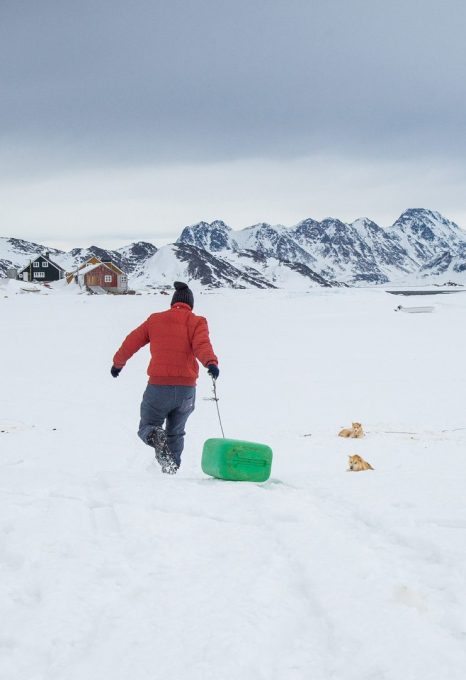 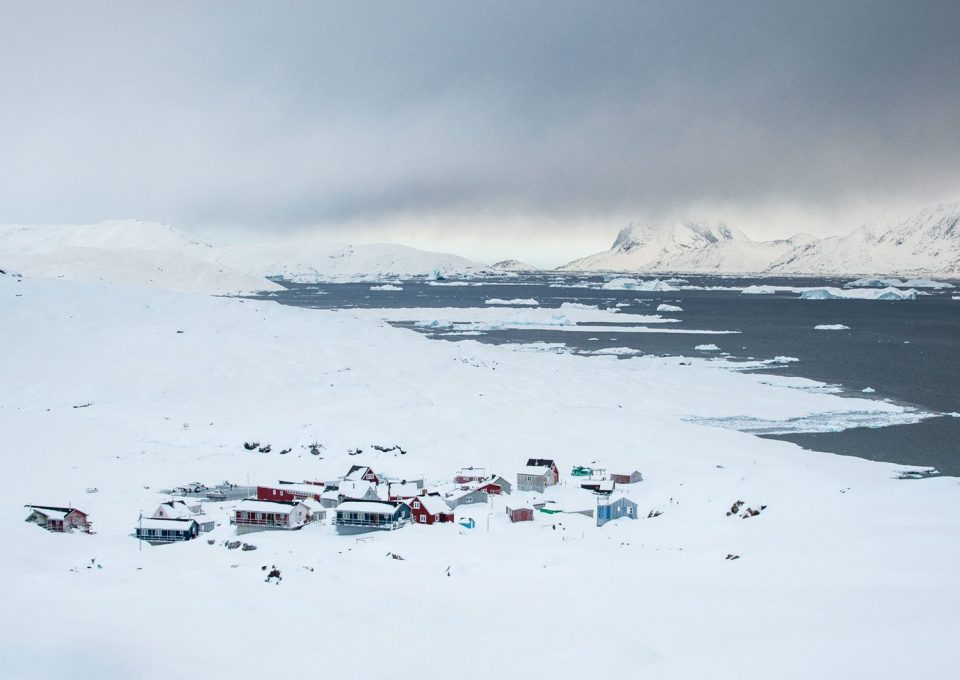 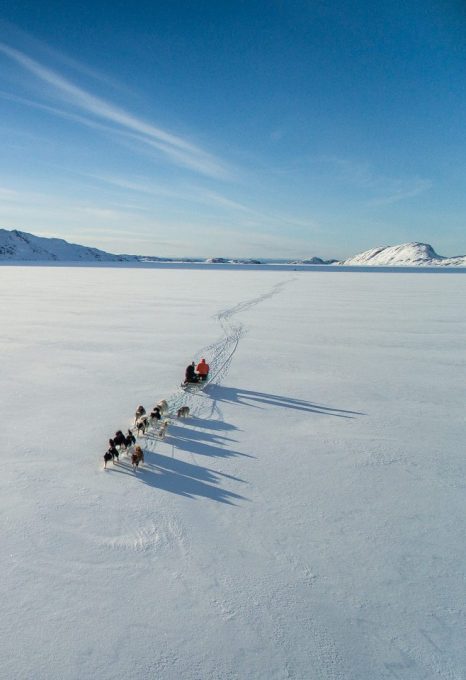 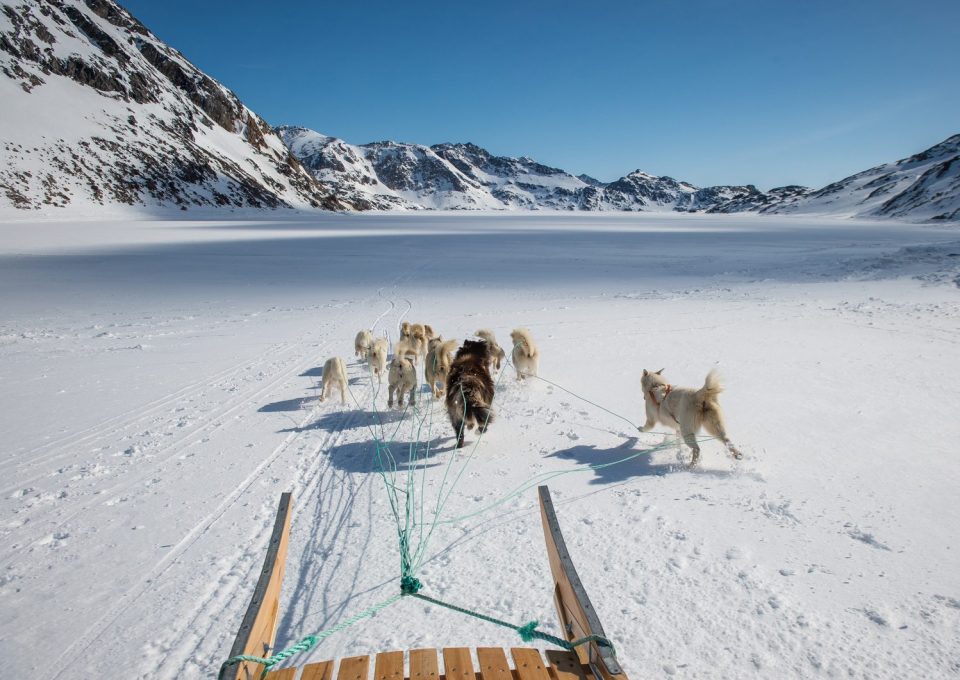 I was lucky to be joining a sled hunt at all. The early spring sun had resulted in extensive loss of sea ice. Soon, the Kulusuk huntsman would pursue their prey from boats, several villages joining forces to bolster their chances of success. For now, though, it was just Angani, me and his dogs – and a seemingly endless landscape wrapped around us.

The sled glides at a steady 12kmph, the sound of its runners on snow like a thousand people shushing. Angani screams orders at his dogs intermittently – left, right, faster. His voice has a hollowness in the cool air, drowned out by the space around us.

The dogs slowed. Then stopped.

Angani looked at me with excitement: they had picked up the scent of a seal. Inuit have been hunting seal for generations. The modern-day hunts continue as they always have – with an acute sense of the order of things, the bounty that nature provides and the importance of not taking more than one needs. It is sustainability, without the tag.

The difference now is that Angani and his friends hunt with rifles. Some even use camouflage. After a quick look through his scope, Angani confirms what the dogs had smelled: seal. Without another word, he dismounts from the sled and walks – dressed in white – towards the seal, which is sat next to a hole in the ice. The dogs are still. So am I. So, it seems, is the wind. When the seal moves its head, Angani pauses. He walks a little further, pauses. And so it goes. As he reaches the point from which he feels he can hit his target, he lowers himself to the ice.

Rifle to shoulder, eye to scope, finger to trigger.

A shot rings out, echoing off distant rock faces before, chasing itself into the distance, lost to the cold.

The seal scurries to his hole and returns to the sea. Angani had missed.

The Inuit’s reliance on the sea for survival remains undiminished by the modernity that has washed up on these shores in recent years. Seals, fish and whales all still form a part of their small-scale and sustainable diet. They are permitted to hunt everything, even polar bears and narwhals, though these are subject to quotas (and moral judgements) as a consequence of being on the IUCN Red List.

We are forced to backtrack, the pack ice too fragile to navigate by sled. 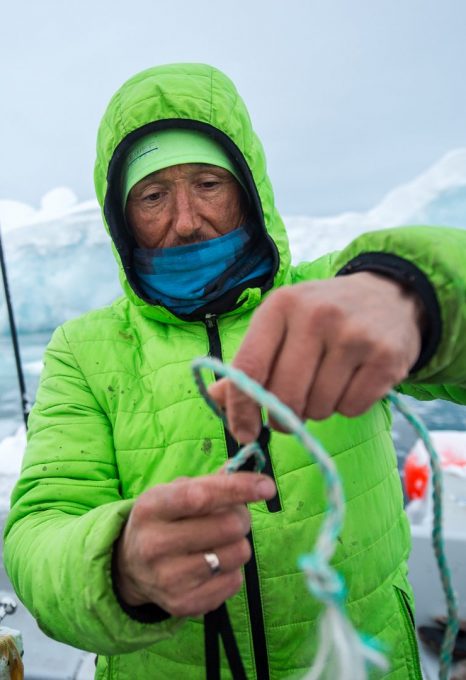 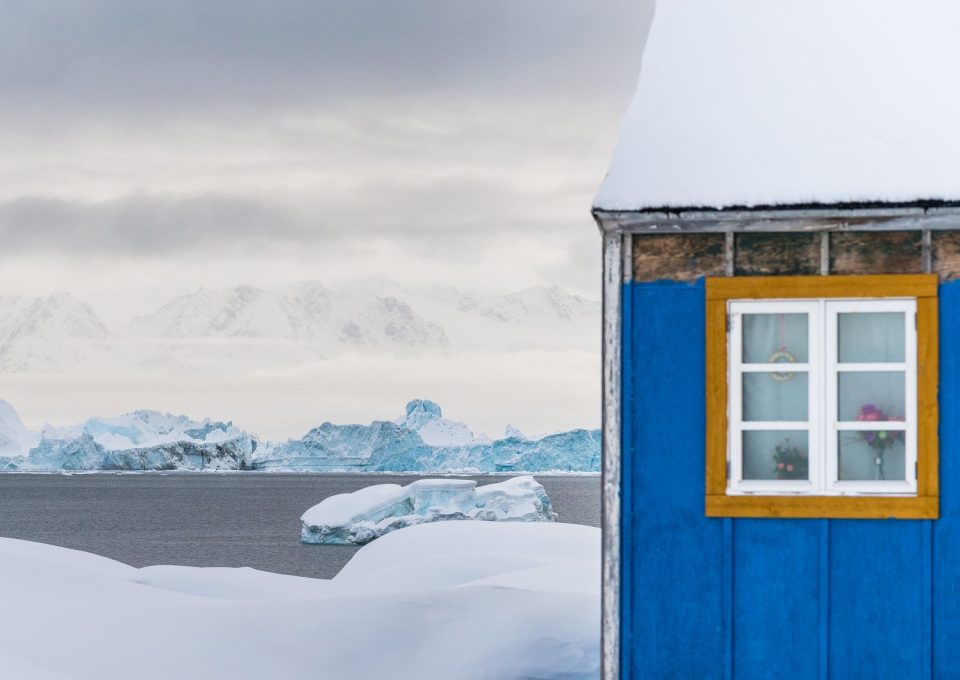 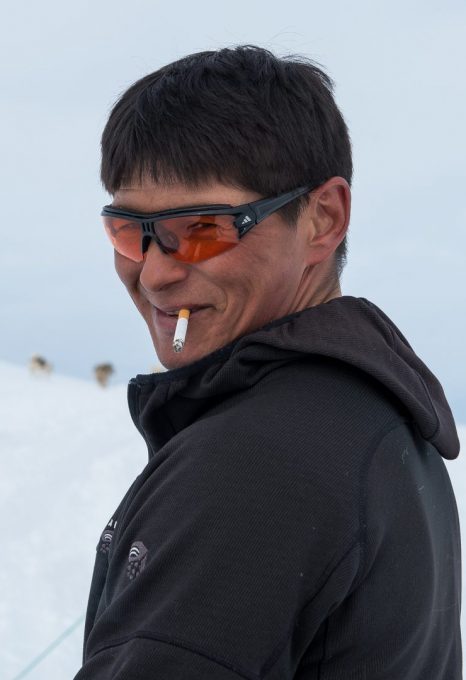 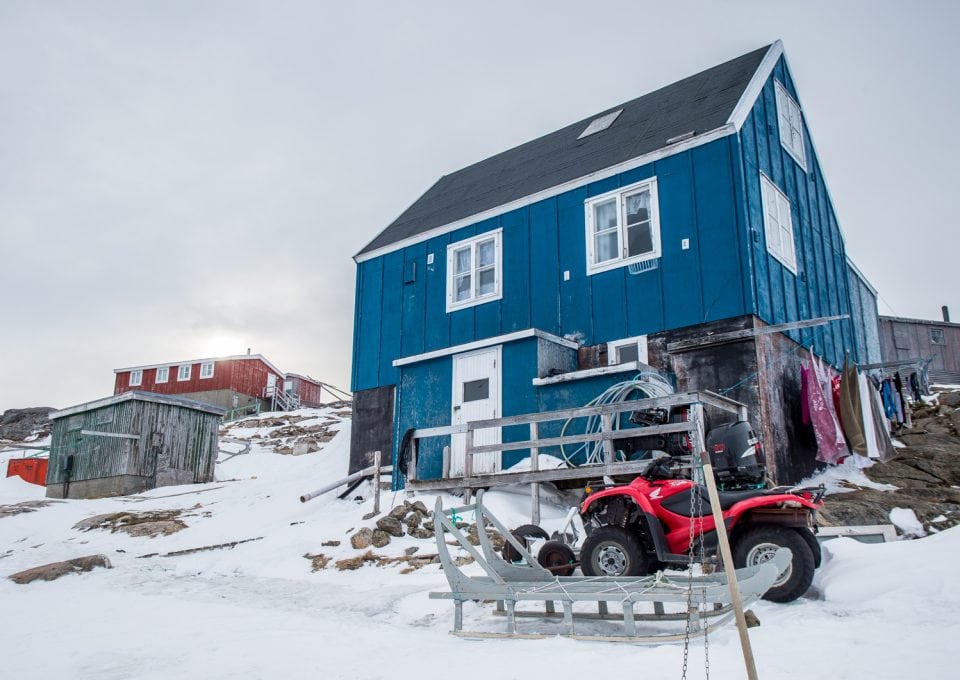 On our return to the village – our route taking us in a big loop – we are forced to backtrack, the pack ice too fragile to navigate by sled. The journey home, back through the frozen fjord – rhythmic and beautifully monotonous – is a long and exhausting one, especially for the dogs. When we arrive back in Tasiilaq, its colourful homes an anomaly in the white, we are greeted by Angani’s son, his cherubic face pressed against the window in anticipation.

The Inuit of East Greenland have survived for centuries in one of the most isolated parts of the world, where the pack ice from the north cuts them off for up to nine months of the year. As a great Inuit proverb puts it: Only time and ice are masters. The Inuit have always adapted to survive.

As soda cans are cracked open and sweets are shared, as Angani animatedly watches dog sled races on his widescreen television, the endless fjords and ancient mountains – vast expanses that had swallowed us up just hours before – seem separate somehow. It is clear that survival has taken on a new meaning here. Many have left for brighter lights, in search of real modernity – especially the young men. Angani and his son are just two of 260 residents left in Tasiilaq. The survival of their village is, perhaps, what is truly at stake now.

In Greenland, it is not only the climate that is changing.