Life in the mud

Life in the mud

The mudskipper is a marvel. A walking, jumping, googly-eyed wonder that lives most of its life in mud. The species could also be an early warning system for coastal health.

The mudskipper is an extraordinary fish. It can live both in and out of the water, can withstand extreme temperatures – both hot and cold, and rapid and drastic changes in salinity. These amphibious fish, native to the tropical and subtropical regions of Australia, inhabit the vast intertidal mudflats and mangroves from Queensland to Western Australia.  Dubbed mudskippers for their acrobatic displays on the exposed mudflats during low tide, these evolutionary wonders are more than just a fish out of water.

Of the 43 mudskipper species found across the world, 13 are found in Australia. Six of these are endemic to Australia and New Guinea. Mudskippers are considered one of the dominant ecological components on tidal flats, and contribute to the maintenance, integrity, and health of these coastal ecosystems. Despite the severe environmental conditions, including large fluctuations in temperature, high turbidity, low oxygen, and high levels of pollution, they have adapted to thrive – a specialist in their environment.

All mudskippers are bimodal breathers, which means they can breathe both by gulping air and by cutaneous respiration through their skin. Although they have multiple modes of breathing, they need to remain wet in order to absorb oxygen and expel carbon dioxide through diffusion – one of the reasons mudskipper populations are concentrated in humid and moist habitats, like those adopted by amphibians. Their eyes are well-adapted to vision in air, such that when they lay in wait for their prey only their eyes protrude from the muddy water – they rely on them to hunt. Beneath each eye is a water-filled cup formed from skin folds; to prevent their eyes becoming dehydrated when exposed to the air for long periods of time, mudskippers can retract their eyes into these cups to be moistened.

On land mudskippers use their pectoral fins to walk. They can also climb. Using this quite unique skill set, some species seek out rocky crevasses for shelter. The ability to bask, splash, roll, walk and climb across mud, puddles and rocks allows the mudskipper to thermoregulate, keeping its body temperature regulated, even when the surrounding temperatures change.

On land mudskippers use their pectoral fins to walk.

Mudflats are a challenging environment for any organism to inhabit. Survival requires the ability to adapt to daily cycles of submersion and emersion, large fluctuations in temperature and salinity, ultraviolet irradiation, and extreme oxygen shortages. Open mudflats extending offshore in estuaries or along the seaward edges of mangrove forests lack cover to protect embryos and egg-guarding parent fishes from extreme conditions, and terrestrial predators during low tide. Even though mudskippers tolerate exposure to air for hours during low tide, they will dry up without frequent access to water.

Survival also requires the ability to protect one’s patch of mud – the space where mudskippers spend most of their time, where they often feed and breed. Territorial behaviours are often displays of defence, an attempt by an individual to keep rivals or intruders at bay. In most scenarios the larger, dominant fish initiates the encounter and body posturing. Erect dorsal fins and open mouth displays are usually the extent of the confrontation. Often just raising a dorsal fin is enough to scare off an intruder. Though guards need to be kept up – even during mating, some males will attempt to interrupt a courting couple. Things can turn aggressive, quickly, particularly if the interrupter is a stranger rather than a neighbour. For the most part, territorial behaviour is ritualised between neighbours, and therefore relatively harmless. Local peace is further maintained with the construction of mud walls around individual territories.

Despite these walls, mudskippers don’t live alone, but rather in mixed colonies with various species including crabs. The fish prefer to live in polygonal territories of about one metre and build burrows to avoid predators, seek refuge and protect developing eggs. The male typically excavates a space or takes advantage of an existing crevice, to create an area suitable for nesting. These borrows, shaped like a ‘J’ or ‘Y’, have a small chamber with an air pocket where the eggs are lined on the walls of the chamber above the water level. Pairs spend a few days in preparation for spawning by cleaning and smoothing out the walls of the burrow, and then eggs are laid by the female individually in a single layer, fertilised by the male, and guarded by both parents.

Mudskippers don’t live alone, but rather in mixed colonies with various species including crabs. 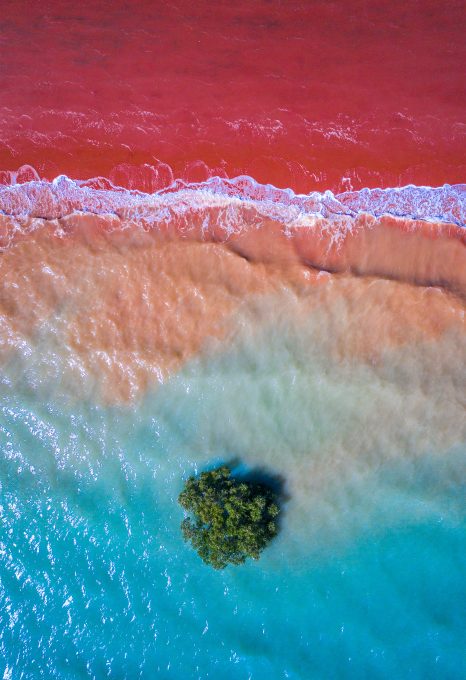 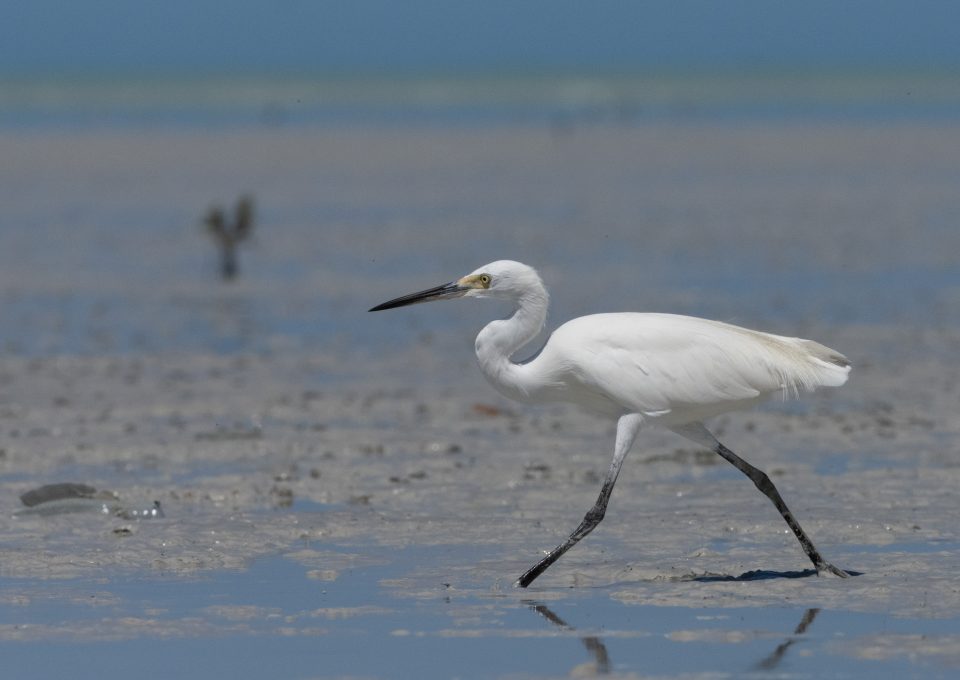 To capture a female’s attention, courtship displays include jumping, arching and body waving.

During breeding season, males display and advertise their suitability as potential mates by conducting acrobatic displays of prowess. To capture a female’s attention, courtship displays include jumping, arching and body waving. Males also puff out their cheeks, mouth and gill chambers by filling them with air. These displays can last up to 20 minutes.

As a potential mate draws near, the male continues his courtship display, slowly drawing her to his burrow, regularly pausing to ensure the female has not lost interest or fallen under the spell of a rival male. The suitor then dips into the burrow and quickly reappears, enticing the female to enter. If she hesitates, the male again pops in and out to encourage her to follow inside. Once she has accepted the invitation, the male returns to the burrow to seal the entrance with mud to deter any unwanted visitors…

This is only a short excerpt of the story. Read the full story, Life in the mud, in Issue 24 of Oceanographic Magazine.

To capture a female’s attention, courtship displays include jumping, arching and body waving.