It’s just before dawn as I walk the launch ramp down to the edge of the water.

The Sea of Cortez is almost silent and blanketed in darkness. As I shake off this morning’s early start, the star-filled sky slowly begins to disappear into warm shades of red and orange emanating from below the horizon. Soon the sun will rise, illuminating Baja’s signature landscape and bringing the stage before us to life. Local fishermen are the first to enter the scene, diligently unloading their pangas from trailers into the water as they prepare to start another day’s hard work. As they load a net into their boat, we exchange morning greetings and I can’t help but to be reminded of a video I received a few days prior. A painful clip of illegally caught mobula rays being chopped apart and filleted on a beach not too far from where I currently stand. But the fishermen here are not the problem – if anything they are an integral part to a much-needed solution.

We start our journey down the coast over a glass-like sea. As the sun lifts higher into the sky, its rays signal the start of a dawn chorus unlike anything else on Earth. The first ray launches from the ocean and splashes down with a slap. Then within seconds, more and more break the surface in all directions, until we are unsure where to look. From the boat, schools of hundreds, or even thousands, can be seen gliding slowly just beneath us. But, quietly slipping into the water gives you front row seats to this incredible spectacle of nature. It is a show I still struggle to describe, no matter how many times I bear witness to it.

It’s a choreographed dance created by thousands of devil rays, comparable to gigantic flocks of elegant birds soaring peacefully in unison through beams of dawn light. At first, the school of rays is cautious of this strange creature swimming alongside them but soon they begin to accept me as one of their own, inviting me to soar along with them. The school moves with such grace and beauty that it creates a feeling of Zen within. It is a feeling that words and even images cannot seem to capture, no matter how hard we try. It is this feeling that inspired our work with them and the reason we are all here today.

As the sun lifts higher into the sky, its rays signal the start of a dawn chorus unlike anything else on Earth

Years of working in diving has shown me the good, the bad, and everything in between. There has always been a common thread throughout the years. No matter how hard life got, the ocean was always there to provide me with moments of clarity and memories that I will cherish for the rest of my time on this pale blue dot. Years ago, when I was distraught with the industry and planning to leave diving altogether, the ocean delivered a chance encounter with a creature I had been in search of for years. It was a moment of realisation. One that would go on to change the entire trajectory of my life. Every great memory the ocean has ever given me has a guest author at its heart. Yet as much as I enjoy the happiness these ocean-dwelling guests bring; I can rarely think of what we can give back to them. They are the reason most of us put on a mask and fins or save up our paychecks to fly to far-flung places in hopes of finding them. But could these memories not work to protect the ocean? This single thought would become the foundation for Dive Ninja Expeditions. I wanted to create a program that could work full circle by utilising tourism as a vessel to protect the remarkable creatures authoring our favourite ocean stories. A platform that could seamlessly blend ecotourism, marine research, and conservation.

From the first moment I experienced Baja’s mobula ray aggregations I wanted to create some sort of project to protect this breathtaking experience for future generations of ocean lovers. But besides very basic information, I did not know much about them. I began delving into research papers online and trying to learn everything I could about these incredible creatures. Then through a mutual friend I was introduced to marine biologist, Marta D. Palacios, who had been working on mobula ray research at Pelagios Kakunja. Marta is brilliant, to say the least. In 2018 she discovered the first nursery of any devil ray species in the world right here in the Sea of Cortez. As she explained how important these nurseries are for the survival of the species, an idea began to formulate in my mind. With the assistance of Marta, we would soon launch Dive Ninja’s first series of mobula ray citizen science expeditions. The project aimed at utilising ecotours to search for more nurseries while teaching guests about the majestic devil rays that call Baja home.

The ocean was always there to provide me with moments of clarity and memories that I will cherish for the rest of my time on this pale blue dot. 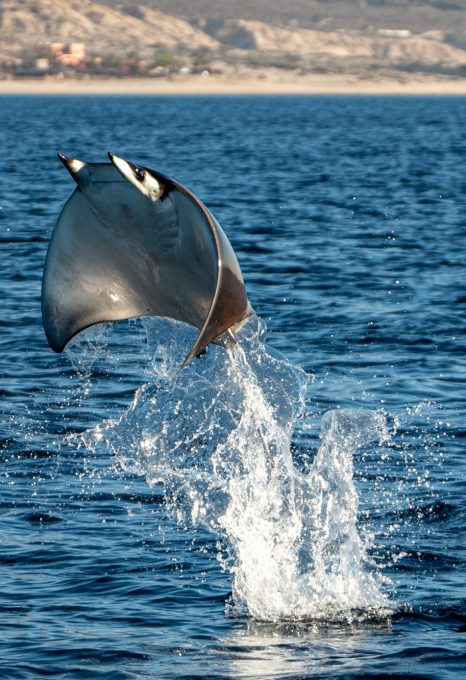 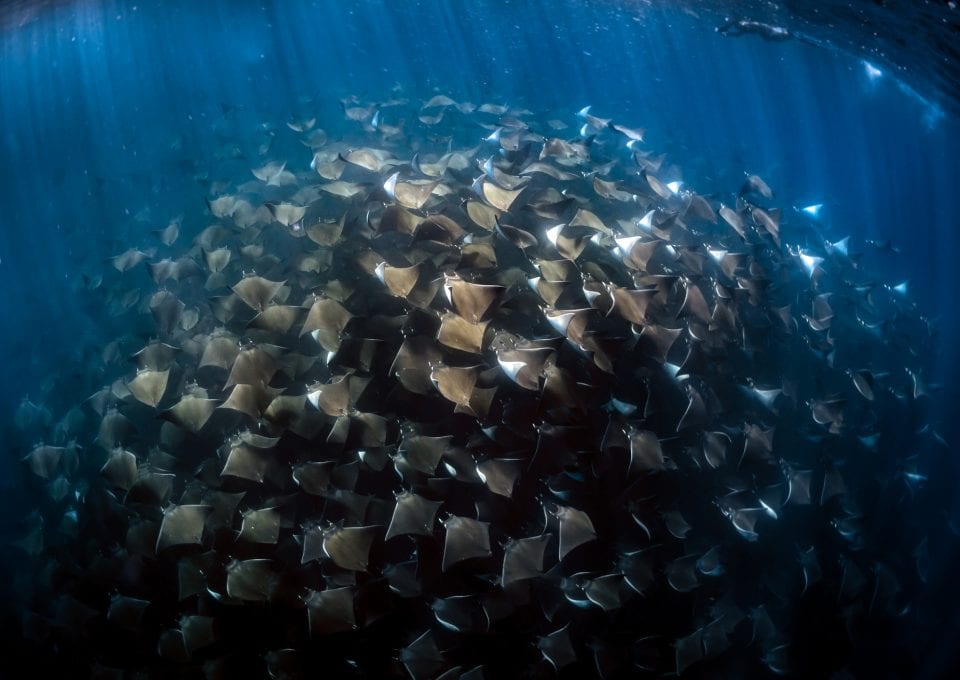 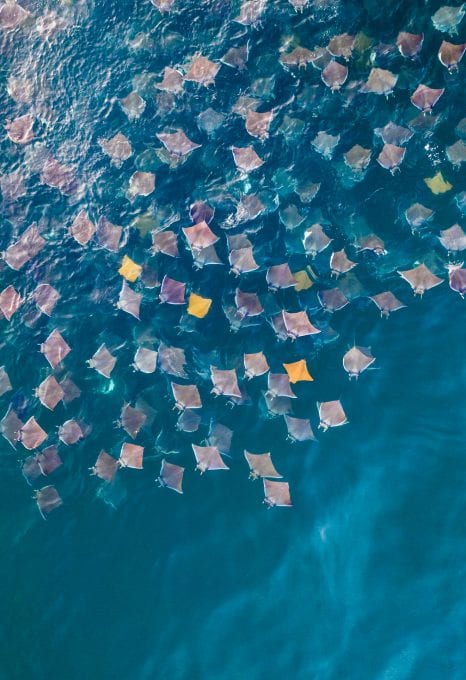 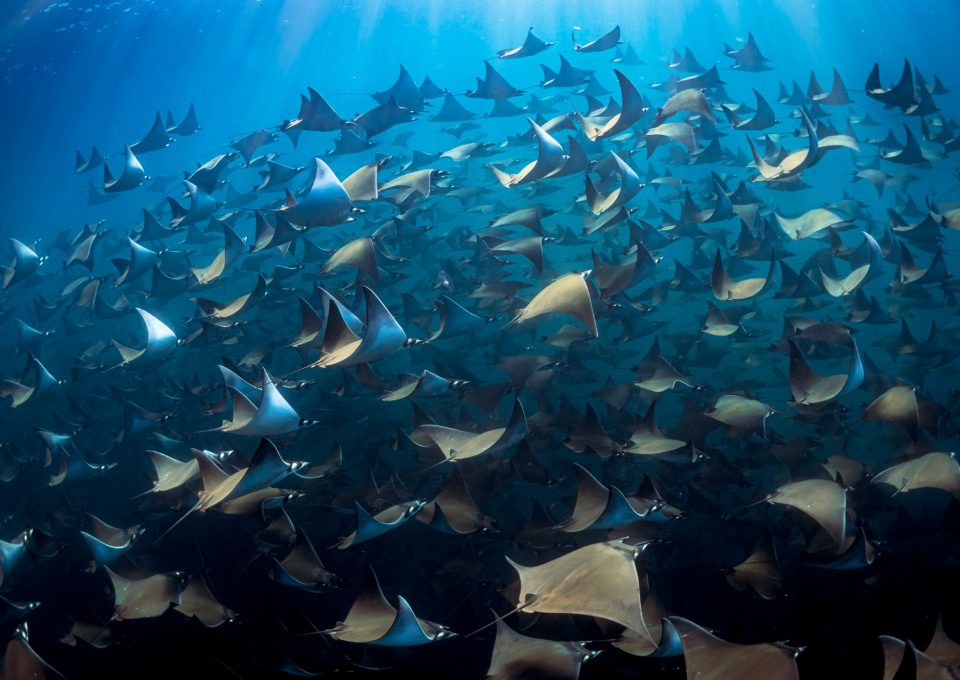 Marta, like myself, believes that when done correctly citizen science can play a critical role in protecting species. As she explains: “During these expeditions, we are actively searching for mobula nurseries and mating grounds; critical habitats that need to be identified in order to establish better protection, and ensure future generations of mobulas to roam the Sea of Cortez. Furthermore, the expeditions financially support applied research that aims to reduce mobula bycatch on artisanal fisheries and also, employs local fishermen as captains changing them from fishing to teaching and observing.”

The Munk’s Devil Rays, or Mobula munkiana, that aggregate off the coast of Baja California Sur, Mexico every spring are the smallest of all devil ray species – reaching an average disc width of just over a metre from wing tip to wing tip. Their annual aggregations can number in the thousands, earning them the credit for creating the largest schools of any ray species on earth. From first glance you would believe their populations are thriving with such a display of so many individuals. But as Marta explains: “Mobulas have very conservative life histories, giving birth to only one pup every gestation period, making them very susceptible to any kind of exploitation”. This goes for all mobula species, but the munkiana is hypothesised to have one of the lowest fecundity rates of all marine species, with current estimates showing them giving birth to only one pup every two to three years, while not reaching reproductive maturity until they are quite a few years old. This, tied with the fact that they are frequently caught as bycatch in gilnets and are even targeted by certain fisheries, begins to paint a picture of how easily we could lose the chance to preserve their populations. Factor in how much we don’t know about them and it begins to become quite a grim painting. In 2018, the IUCN changed their conservation status from near threatened to vulnerable to extinction because of this.

Marta continues: “Although in many regions, like Mexico, they are protected by law, they are still victims of illegal fishing for their meat and gill plates and appear in large numbers as bycatch in artisanal and industrial fisheries. Mobula populations can collapse very quickly if these issues are not addressed on time, leading to local extinctions.”

Her current research, backed by the Monterey Bay Aquarium, aims to understand the impact that incidental fishing of mobula rays can have on their populations. By working side-by-side with artisanal fishermen she hopes to find better methods and practices to avoid incidental catch of mobula rays in the first place, but also to increase their survival rate after being caught in fishing nets.

Mobula populations can collapse very quickly if these issues are not addressed on time, leading to local extinctions.

Just because we cannot reach the ocean does not mean we have to stop making progress.

This year, our mobula ray citizen science expedition program has expanded into a new area that I have been exploring for some years now. Last year, we discovered what could potentially be another nursery. Throughout the season I would spot small juvenile munk’s devil rays almost every week at one of the sites. One day in particular, we spotted the school of juveniles swimming alongside a young oceanic manta in the shallows. But unlike the other nursery, this is a region outside of any marine park regulations. Yet its unique topography seems to attract some of the largest schools of adults that we have seen. It is also an area with a history of targeted illegal mobula fishing going back decades. By moving to this new location and working within the community we hope to be able to curb both illegal fishing and incidental bycatch, while also showing the community the possibilities ecotourism projects like ours could bring to the area. Ultimately highlighting that they are worth much more alive than dead.

Our projects, like many others around the world, have been currently put on hold for the health and safety of our team and guests during the COVID-19 pandemic. Just because we cannot reach the ocean does not mean we have to stop making progress. Plans are already in the works with Marta to develop an economic assessment of mobula ray tourism, as well the beginnings of species management plans in both this new expedition area and Los Cabos. The downtime has also allowed us to finish designing new ecotourism projects in other areas of Baja with Mako sharks and Grey whales.

Our partnerships with the local captains and communities tied to these waters are crucial to this. After climbing back on the boat during a recent scouting project I commented to the captain how beautiful it was to see the rays return. They had seemed so friendly that day, coming up to the surface, completely surrounding me – a fairly rare behaviour with this species.

As we watched them continue to breach from the boat, our conversation turned to speaking of his young daughter and her new-found love for the ocean. Recently, he had taken her to swim with the rays for the first time. The pride on his face as he shared this memory with me was heartwarming. But he quickly segued into how some of the local communities still fish devil rays. This is something we had spoken of before. But then, he asked something that caught me off guard. “What can I do to help them?” He said it with genuine concern in his eyes. He wanted to know how they could transition away from fishing mobulas. If we could maybe talk with them about why this species is so important, maybe they would listen to Marta and want to learn with us. It was a moment, that for me, was more inspiring than the thousands of schooling rays I had just left in the water. A moment where a human had become the author of one of my greatest ocean memories.

Just because we cannot reach the ocean does not mean we have to stop making progress.