The fishers of Indonesia have all experienced first-hand the consequences of climate change.

Sea conditions have changed in front of their eyes. I don’t think I spoke to any fishers who didn’t agree that it was a combination of global warming and rubbish that had led to reduced catches.

I travelled to Java in late August 2019, zigzagging across the island from Jakarta all the way down to the ferry over to Bali. I wanted to capture the faces of the Nelayan, the fishers of Indonesia. An unfathomable amount of plastic from the sea gets caught in the fishers’ nets and dominates the coastlines. Some locals deal with it by fighting the good fight – they collect and try and dispose of the trash – either by burning it or getting it collected but the majority are sadly adding to it, dumping their household waste on to the beach or into the rivers. I spoke to an old fisherman who was almost in tears as he told us that he cries himself to sleep as night as the situation is so dire.

I knew that there had been huge efforts to clean up the beaches in places like Bali – areas that have heavy tourism were obviously going to be cleaned up and made to look postcard perfect. It would be terrible PR for the main tourist sites to have beaches covered in rubbish and plastic, so I knew I had to search out areas that weren’t the usual tourist hotspots; areas that were more realistic examples of everyday life for the local residents.

I reached out to a few local fixers and found a team who were willing to hunt around with me to find the right areas. Without these fixers I wouldn’t have been able to do the trip. We’d been researching for months to find the right beaches and the fixers had reached out to other locals who in turn put us on to locals like the heads of the local fishing community.

When we arrived at the first location I was gutted. We had been previously been at one of the world’s largest rubbish dumps near Jakarta, but this was very different. The rubbish dumps are bad, but you go there knowing roughly what to expect – a terrible smell and tonnes upon tonnes of rubbish. It is what it is. But at these sites, it was the sheer scale that threw us. We were driving on a road parallel to the beach when we first saw it – there was a small pang of success that we had found the right beach (after all, I had travelled a long distance to make this series) but the overwhelming feeling was that of crushing sadness.

I wanted to capture the faces of the Nelayan, the fishers of Indonesia. 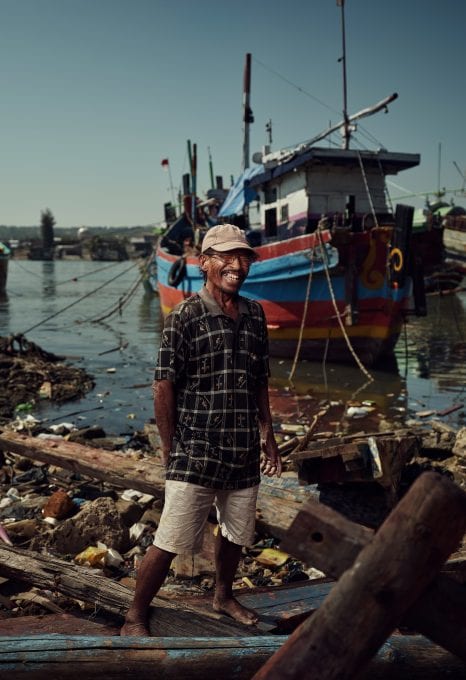 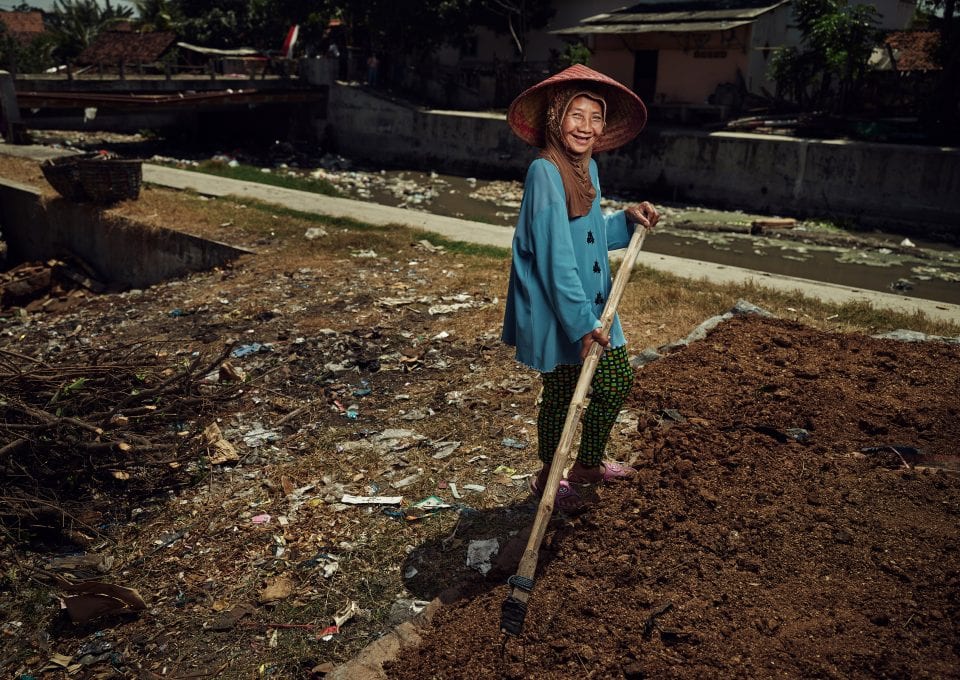 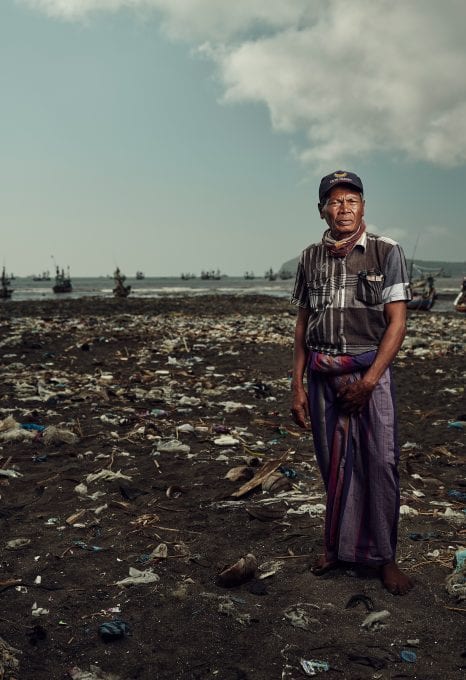 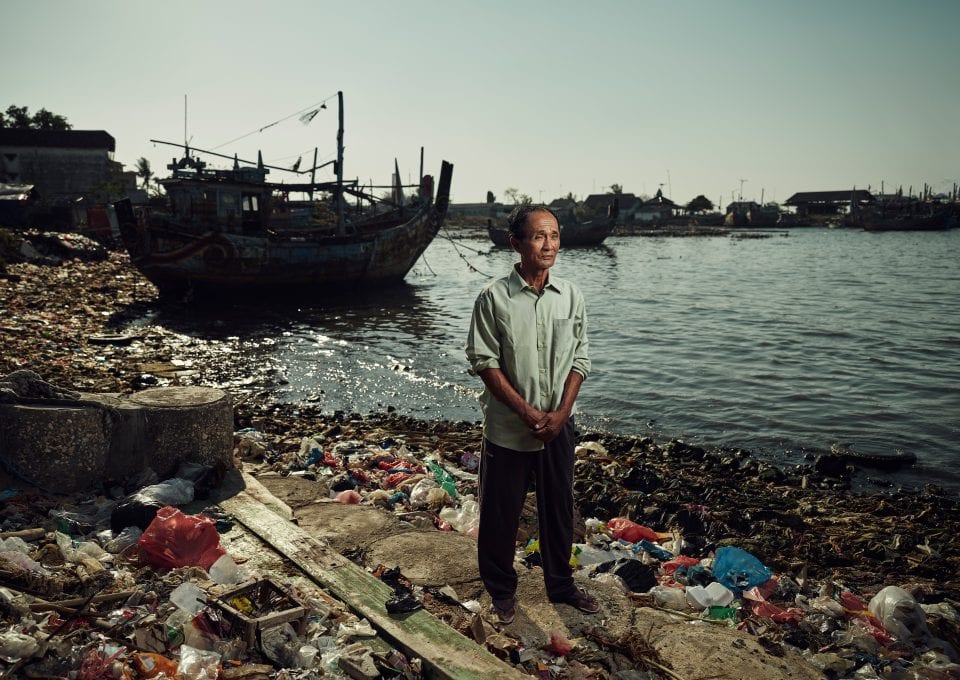 We pulled up in the van, walked down to the beach and met the head of the local fishers who sat with us and offered us drinks whilst we spoke about the dire situation on the beaches. After meeting the local fishers and hearing their stories we walked around taking in the scale of the rubbish – we knew it would be bad, but we weren’t expecting three feet of extra coastline, comprising of matted nets and discarded ropes. My crew and I were all wearing armoured wellington boots. It felt odd walking on a beach in such industrial footwear, but there was broken glass, burning nappies, plastic and bags wrapping around our thick ankles as we walked on the ‘sand’ and through the water.

Children were running around and playing football on the rotting piles. They must have been somewhere between six and nine years old and I suddenly realised that they had never know this as a clean beach – the rubbish had been completely normal for their entire lives. As I was walking up the beach with my team, one of the children cut his foot on glass whilst running after the ball barefoot. That memory is burnt into my mind, the child clutching his bleeding foot surrounded by rubbish and burning plastic. Children should be able to play on the beach without any worry of injuring themselves.

I wasn’t hit by a smell the same way I had been whilst photographing scavengers on the rubbish dumps. The air here was different, it was fresh and with the scent of recently caught fish emanating from the boats and nets. This made it more frustrating to match the visuals with all my other senses.

We consistently felt the crunch of rubbish, bones and plastic under our feet where we should have been hearing sifting grains of sand. The waves rushed up to our feet, only to pull back and deposit plastic bags on our boots. The lines holding the boats to the shore covered in dripping plastic bags. It is one of the world’s most beautiful places, almost totally ruined by plastic and rubbish.

Out at sea, the situation is just as bad for the fishermen – much of their catch is plastic. They told me that their nets need mending a lot due to the plastic weighing down the machinery and cutting the nylon. At the different beaches the fishers tended to catch different species depending on how far their boats could travel, the main catches tend to be Lemuru and Petek. Their catches have got smaller and smaller over the past ten years. The fishing community has seen the standard of life drop as the catches have reduced but as the catches aren’t weighed or recorded, it wasn’t possible to get figures. Some of the most common bits of rubbish in the ocean is fishing paraphernalia that has swept in from all around the world, because when a net is ruined or a rope becomes useless it is then often thrown overboard – ending up in other nets or washing up as debris on the coast. 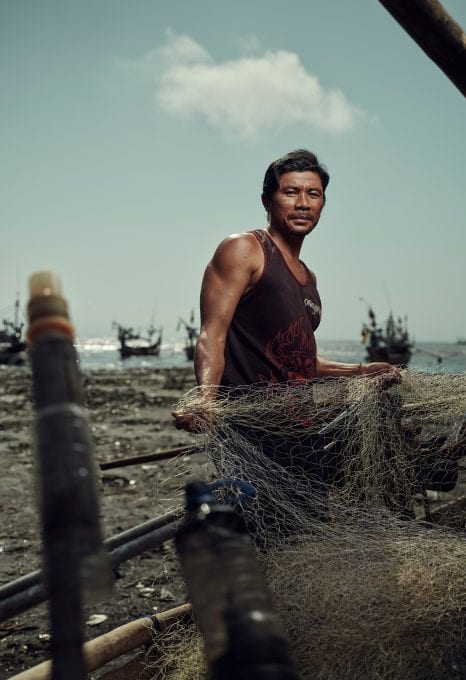 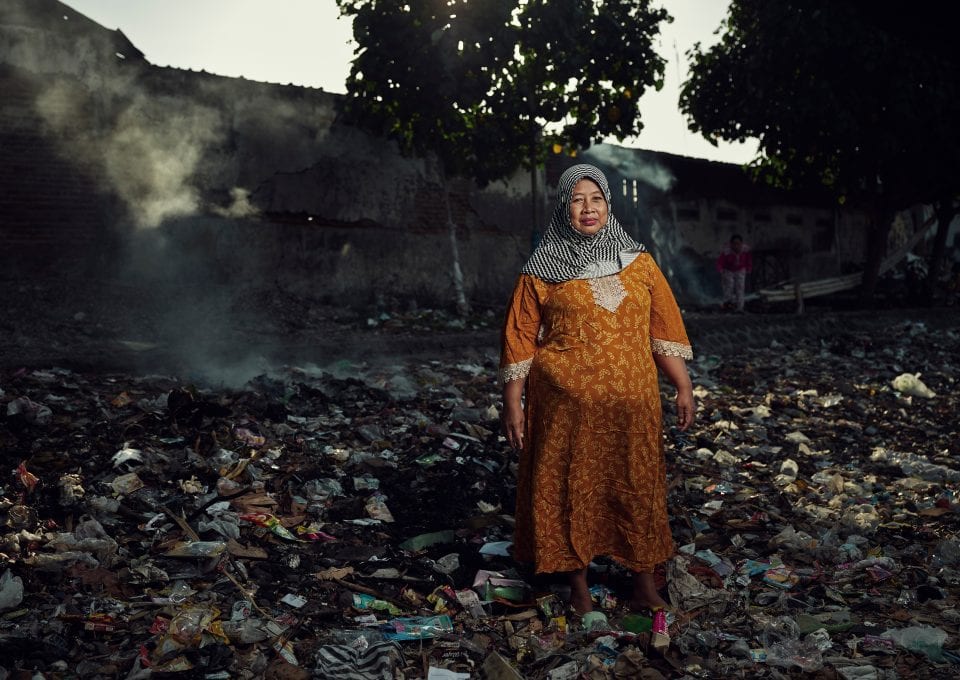 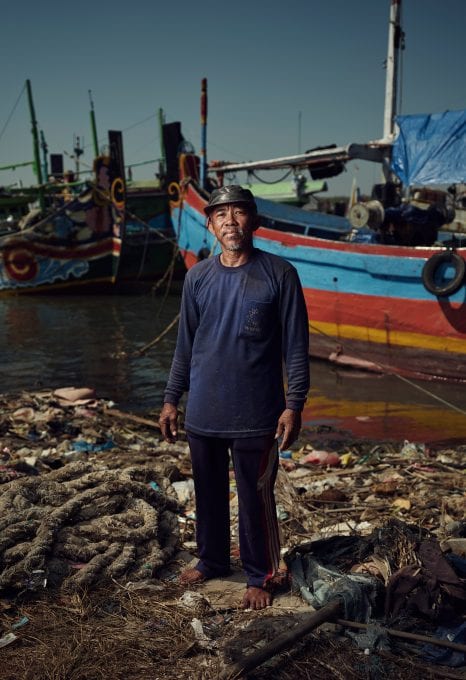 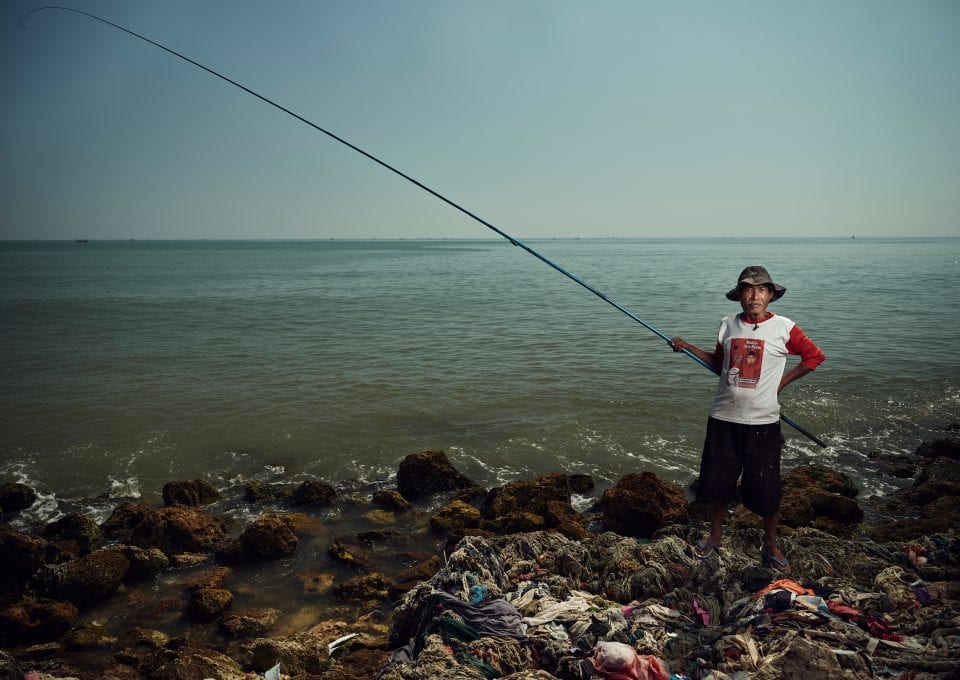 Out at sea, the situation is just as bad for the fishermen – much of their catch is plastic.

Some local government bodies have opened some small local dumps and this has helped certain areas but in others there are still no rubbish collections. There are a few small local groups trying to clear the rubbish including 4Ocean, who we saw working in Bali. At one of the beaches we visited there were brand new waste bins, but I watched as some people walked straight past those and dropped rubbish directly onto the beach. There has to be a change not just waste collection but also helping local people to understand that if their waste is collected it will slowly improve the area. I don’t know how much effect this can have – while speaking to locals I felt a consistent air of hopelessness. Many seemed resigned to the fact that their home is now just permanently covered with rubbish.

Each beach we visited tended to have a different mix of problems in varying levels of urgency. Some were swamped by an influx of rubbish due to the currents, whereas others it was primarily down to poor waste management and specifically the absence of waste collections or local dump facilities. Many locals have had to accept that throwing rubbish onto the beach seems to be the only option. I guess the thinking must be ‘why would it be a problem when the beach is already covered in plastic and rubbish?’

It’s common knowledge that things need to change. Urgent action needs to be taken by the major producers of plastic to ensure that their products are both recyclable and recycled, so that they don’t end up in our ocean and on our beaches. My goal with this project was to raise awareness of the impact plastic pollution is currently having on people’s day-to-day lives. To show people that this is happening right now, and as things stand, this is not an issue that is going away anytime soon.

Out at sea, the situation is just as bad for the fishermen – much of their catch is plastic.