I was floating in the deep blue, about a kilometre from the shore in Exmouth Western Australia at South Mandu beach.

I often do big swims like this to the outer Ningaloo Reef to explore new underwater kingdoms in the hope of seeing marine life. It was the end of May, a magical time of year in North Western Australia when you never know what you might see. I was out the back with my two work colleagues, no boat just the three of us and the water. All of a sudden we saw a blow about 100m in the distance, one of the girls turned to me and said, “was that a whale?” We were all new to the area and had been told that the whale season was still about a month away. The next thing I knew one of the girls had grabbed my leg and as I looked in the direction that she was pointing I saw two huge figures emerge from the blue water – a humpback whale and her calf. The three of us were shoulder to shoulder as the two whales circled us, the mother turning on her side and eyeballing us three strange creatures. The calf was playful and zipped around, while its mother was a little more cautious. After some time, she decided to pull her baby in and shuffled the calf onto her back for protection. After one last circle the two whales continued on their journey north to warmer waters on their annual migration, leaving us behind still floating in the water and absolutely gobsmacked.

This was one of my fondest memories of the Ningaloo Reef, which has been my home for the past three years. I work here as a photographer and presenter working with Ningaloo Discovery and National Geographic Australia. The past three years have been an absolute whirlwind for me but I’m going to bring it back to where my ocean mission started.

I have always had a love for the ocean, and after finishing my studies at the University of Western Australia I decided I wanted to move to Ningaloo. This was a place I visited often with my family as a kid and it blew my mind. I can remember the first time I went snorkelling in Coral Bay taking that first dunk with my mask and snorkel aged three and yelling: “Mum, did you see what was down there?!”

A few years ago I was searching for jobs in the area and got one as a housekeeper in the Cape Range National Park at an eco-lodge called Sal Salis. Moving was a massive change. I was working for two magazines and as a function host in Perth and traded it all in for scrubbing loos in a place surrounded the endless red dirt. I remember sitting on the beach after work on the first day, thinking to myself: “what have I done”. I felt like I was starting from the bottom all over again and was wondering if I should just pack up and leave, when I looked out at the water. There was a turtle looking at me, sitting on the shoreline – it must have swum in when I wasn’t watching. Somehow, seeing this turtle changed my mindset in an instant. I saw it as a sign that I was right where I was meant to be. The turtle probably had no idea what an impact it had on me, but I forever thank this creature because from that point my life began to change.

The calf was playful and zipped around, the mother a little more cautious deciding to pull her baby in and shuffle the calf onto her back for protection. 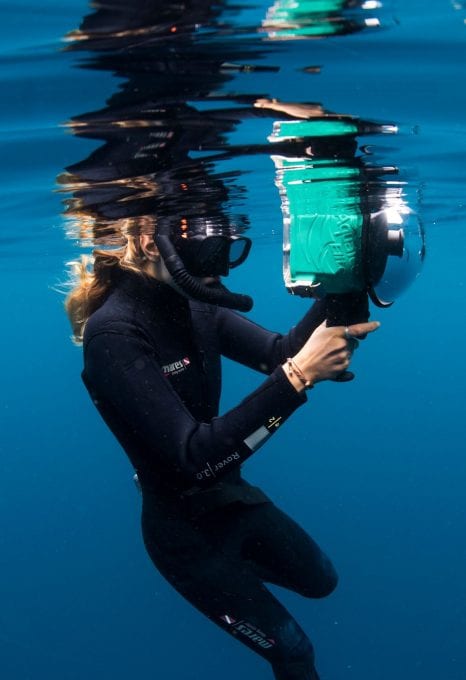 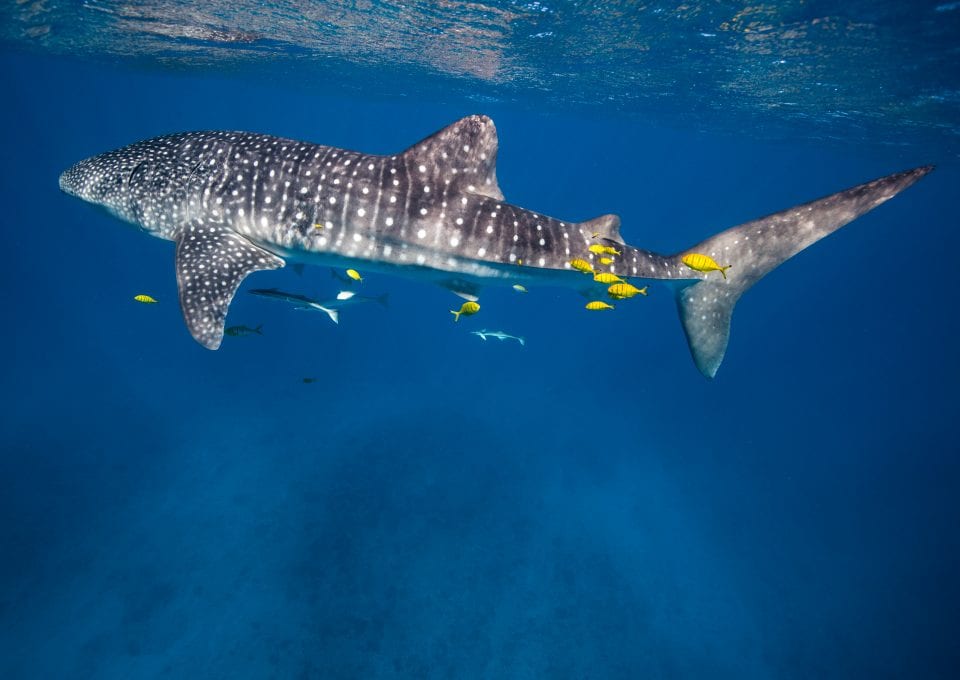 For the next few months I worked hard as a housekeeper, and it eventually paid off. I was lucky enough to be promoted as a guide at camp. Taking people out to explore the Ningaloo reef every day was a dream come true. I lived and worked in the National Park for the next two years, having some crazy adventures along the coast. Some of my favourites include getting a kiss from a tiger shark, swimming through thousands of fish and sharks in bait balls and riding a bush bike across the Nullabor to raise money for native Australian wildlife.

Through all these crazy adventures I started getting into underwater photography and documenting my adventures. I started out with a GoPro Hero 4 and a 50/50 dome, spending hours on the Ningaloo reef swimming around taking photos. I would be out from dawn till dark if I was allowed to be. In my second year working in the National Park I was contacted by Prospero Productions, a production company in Perth who were seeking a presenter to host and conduct interviews for a National Geographic television show called ‘Only in Oz’. The show is focused on wildlife, natural wonders and extraordinary man-made structures found only in Australia. I was really lucky to be involved in some amazing stories and met some really inspirational people doing their part in keeping our oceans healthy and wildlife safe. We covered white sharks and shark deterrents, the mysterious tiger snakes on Carnac Island, the Ningaloo reef and the health of the reef system, and went on tracking and tagging expeditions for blue whales and turtles.

I have to say my favourite two shoots were going on location to see the blue whales and investigating the health of the Ningaloo reef. On the blue whale shoot we worked with the Western Australia Centre for Whale Research, under the guidance of scientists Micheline and Curt Jenner. We went on an acoustic mission to find blue whales off the west of Rottnest Island. The purpose of this expedition was to discover why blue whales are nearing extinction in areas where other whales, such as humpbacks, are thriving. In a nutshell, the reason humpbacks have come back in such high numbers post whaling is that they aggregate in polar areas where their food source is high. Because all the whales are feeding in one area their excrement fertilises their food source and there is a constant replenishment of food such as plankton and krill. The whales being in one location also means there is a higher chance of mating opportunities. Blue whales however are lone rangers and travel great distances to find food and are opportunistic feeders. Their food can be scarce and because they don’t have a consistent meeting place, so the chance of mating is low. While we didn’t find blue whales on the expedition, even with the use of high tech sonobuoys, we were lucky enough to see humpback whales in great numbers. These whales danced next to the boat and I now understand how they got their nickname of the acrobats of the sea! It was really inspiring too to meet Micheline and Curt as they have dedicated their lives to the research and conservation of whales.

On another occasion, I was invited to head out with researcher Damien Thompson to explore some sites inside the lagoon and investigate the health of the coral in the Ningaloo reef. The crew taught me about 3D mapping and how they use this to monitor the health of the coral at their tagged sites over time. The crew monitor coral growth and any signs or symptoms of coral bleaching. We also had a dive to pull up any marine debris and I was so happy all we found was a couple of fishing lines, which was such a good sign for the Ningaloo Reef.

The crew taught me about 3D mapping and how they use this to monitor the health of the coral at their tagged sites over time. 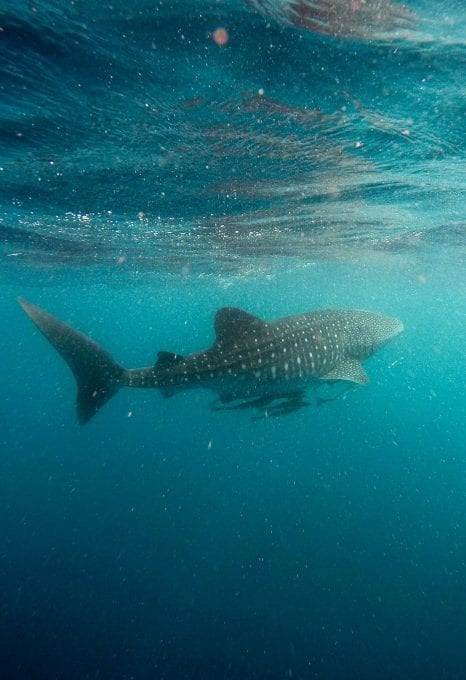 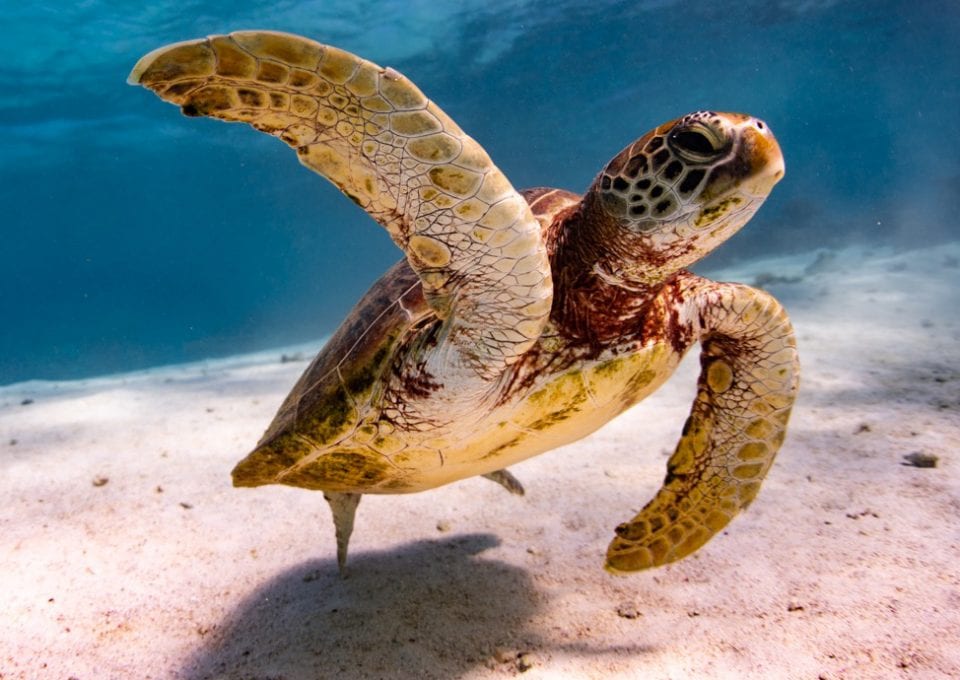 Working on this show was an incredible experience and I learnt so much from some amazing wildlife and marine researchers and conservationists as well as the very talented production crew at Prospero Productions. The show also pushed me to pursue my passion for wildlife photography and videography. Working with researchers and the Prospero team, I learnt that visual documentation can help with conservation and research and can be an eye opener and way to communicate with a wider audience.

So now I work on a whale shark and humpback whale tour boat on the Ningaloo reef. I spend my days on the back of the reef photographing these two beautiful species and hoping to spread awareness about conserving our oceans so we can enjoy marine life like this for years to come. While on board, there are also ample opportunities to get involved in research projects, for example one of my roles as a photographer on tour with the whale sharks is to get ID shots (just behind the left pectoral fin) of each whale shark we swim with. This goes into a huge database that tracks which whale sharks are coming back to the Ningaloo every year.

At the moment I am working on a few different exciting projects that I would love to share. Firstly my partner and I are releasing a short documentary film about the wildlife on and around Lord Howe Island. We visited earlier this year and worked with Marine Parks Australia to document the sustainability and conservation practices they have on the island. We went out filming with researchers from the University of Western Australia, the University of Wollongong and Southern Cross University who were tracking and tagging Galapagos sharks and studying the behaviours and personalities of the Mcculloch’s anemonefish.

I’m also proud to be currently working on the #ProtectNingaloo campaign. The Ningaloo is such a precious spot and so important to me and it is currently under threat from industrialisation. Subsea 7, a foreign multinational corporation, is proposing a pipe fabrication and launch facility at Heron Point, near the Bay of Rest, in Exmouth Gulf.  Oil and gas pipes will be assembled and bundled onshore, rolled down rail lines and launched into the shallows. From there they will be dragged along the seabed for about 1.5km until they float. Once they float they will be steadied by heavy chains that hang down under the pipes as they are towed by tugs. Lines of pipe that can be up to 10km long will be towed through the waters of the Gulf and taken seaward through the UNESCO World Heritage listed Ningaloo Marine Park.

The Exmouth Gulf is a nursery for the Ningaloo Reef and is an important humpback whale resting ground. The Gulf is also home to manta rays, dugongs, turtles, sharks, rays and a thousand other tiny species all of which are important to the Ningaloo Reef. It is so important that we do everything we can to keep this area protected from industry, as the nursery is an invaluable part of the ecosystem here.

I definitely didn’t think scrubbing loos might eventually lead me to hosting a TV show for National Geographic, working as a wildlife photographer or getting involved with reef conservation, but I hope my story can inspire others. I feel so grateful for every opportunity that has come my way and even though I have have come a long way from just discovering the reef for the first time with my GoPro, that sense of wonder and exploration will always push me to discover, learn and share my love for the ocean with others. 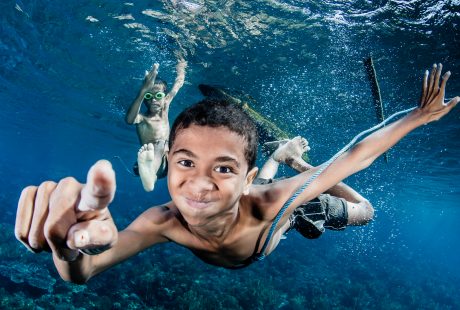