The inhabitants of North Rona

The inhabitants of North Rona

The King of Rona returned to civilisation in 1844. The humble shepherd, a man by the name of M’Leod, had had enough of his isolated existence on the edge of the world.

North Rona lies on the outer reaches of the Outer Hebrides, one of the remotest islands in Europe. It lost its last significant population in the late 1600s, the island’s inhabitants dying after a colony of black rats swarmed ashore from a shipwreck. The rodents either ate the islanders’ food stores or spread the plague. Either way, it would have been a bleak end.

The island was largely used as pasture in the centuries after, by folk such as the King. Now owned by Scottish Natural Heritage, its inhabitants are a little less woolly ­- and a lot more colourful.

We were in the Outer Hebrides to survey the remote caves of St Kilda and North Rona and document the wildlife that called them home. A small number of biological records do exist regarding the sea caves around St Kilda, but there is nothing published about those of North Rona. Prior to our visit, no formal survey work had been conducted at either site.

In 1992, as a result of the Biodiversity Convention at the Rio Earth Summit, the European Community implemented the Habitats Directive. This is the foundation of Europe’s nature conservation policy and was formed to protect its most valuable and threatened species and habitats. Central to the Habitats Directive is the Natura 2000 network, a series of protected marine and terrestrial areas stretching right across Europe. One of the classifications for protected sites is the Special Area of Conservation (SAC). SAC status is assigned to specific habitats and associated wildlife listed under Annex I and II of the Habitats Directive.

An abundance of life clung to the cave walls creating a kaleidoscopic patchwork of texture and colour. 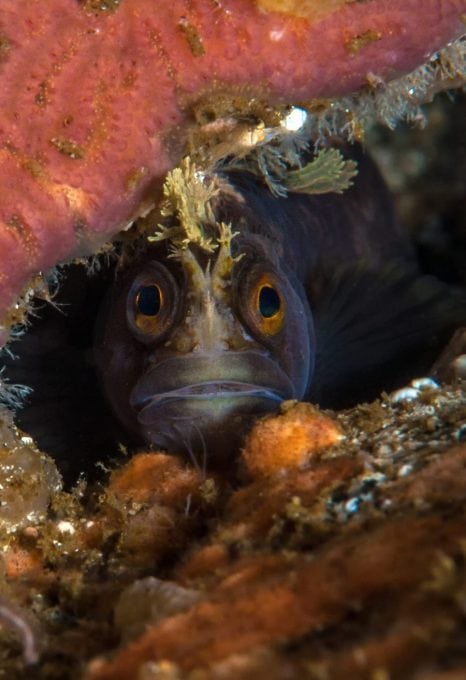 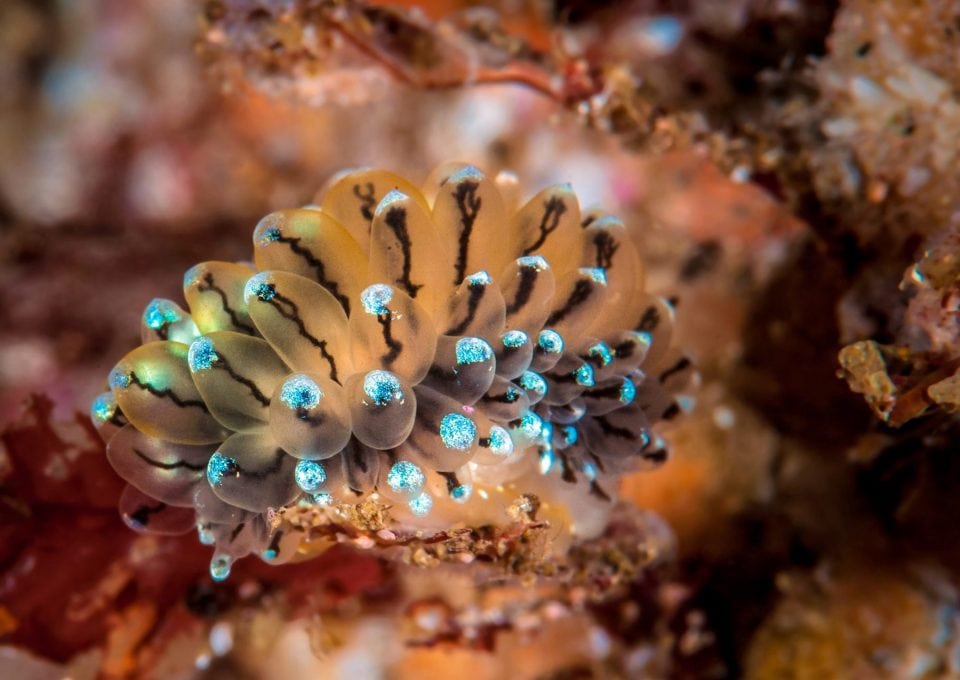 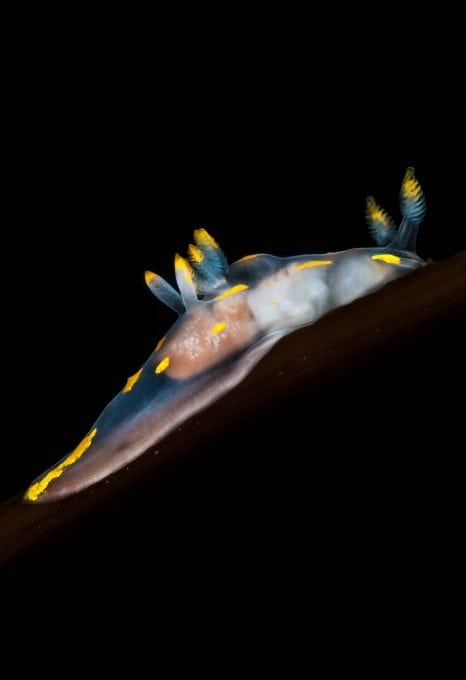 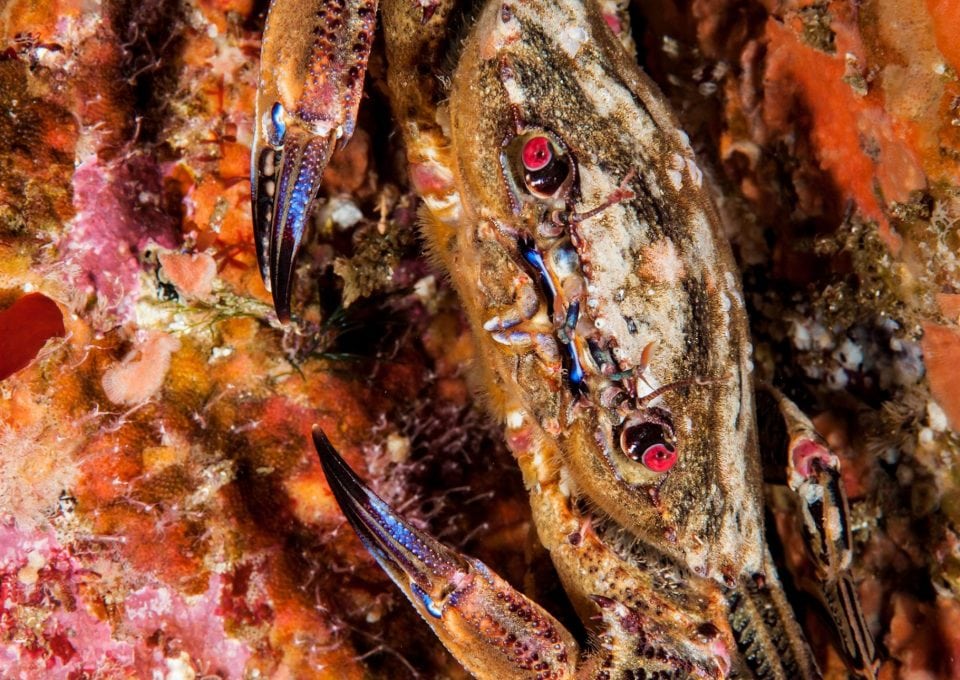 Of the 189 habitat types identified by the Directive, 78 are believed to occur in the UK, 13 of which are classified as coastal or marine. Unsurprisingly, with over 6,000 miles of coastline, Scotland features a good number of these habitats, including a number of sites and associated species which have received SAC designation. The provision of data from within these areas is generally frequent, but some sites are known better than others; one coastal habitat in particular remains largely unknown, due mainly to the inherent difficulties involved in getting to them. Described in Annex I as “submerged sea caves and also partially submerged caves which are only exposed to the sea at high tide”, many are situated around some of the most remote places in the British Isles, and records are typically sparse as a result.

Sea caves are relatively numerous, dotted throughout Europe’s rocky coastlines, and the UK has some of the most varied and extensive examples. As a habitat, however, they are comparatively scarce, making their unique environment of particular value to researchers and conservationists. Due to the relative inaccessibility of many sea cave systems, particularly around some of the outer Scottish islands, there is still much we don’t know about these habitats. What we do know, however, is that they are almost always home to unusual and, very often, rare species. 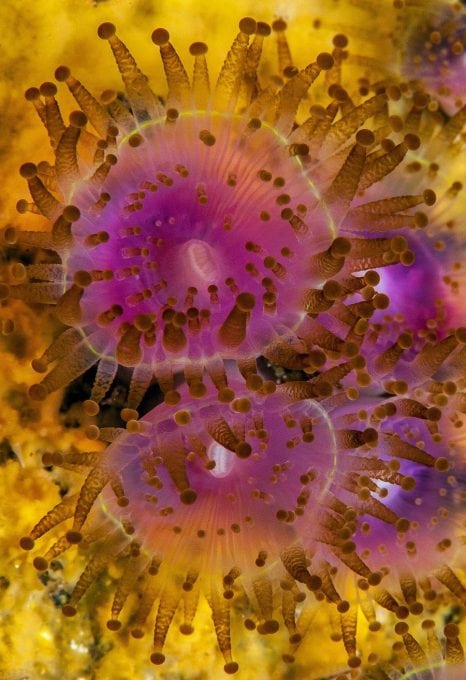 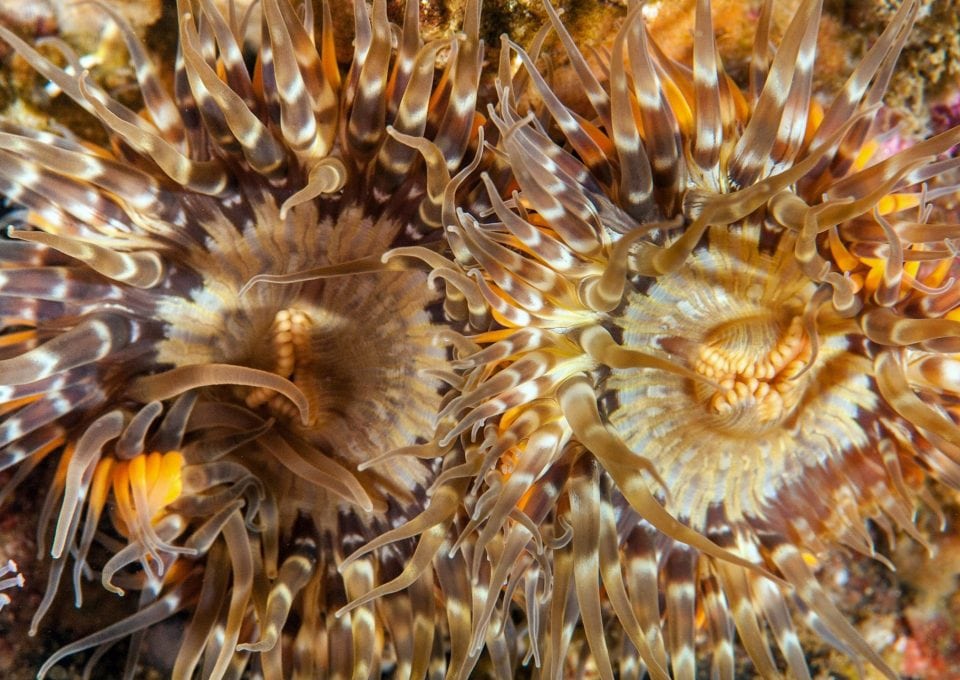 We reached North Rona on the very last day of our St Kilda expedition. Less revered than its distant neighbour, but with just as fascinating a history – small populations, shepherds such as the King, a German U-boat using it as a stop-off in World War I. It is now managed as a nature reserve, primarily for its grey seal and seabird colonies.

The crossing to North Rona from St Kilda was unusually calm, and, after around 17 hours we arrived to thick fog, the island looming out of the haze. We had limited time – the weather was due to deteriorate and we still had to make the crossing back to Orkney. We would only have the best part of a day to try and do as much as we could while the sea was still calm.

Two caves were quickly identified for exploration and the first team were in the water soon after arriving. The conditions underwater belied the gloomy weather. An incredible abundance of marine wildlife clung to the walls around the cave entrances creating a kaleidoscopic patchwork of texture and colour. Venturing further into the meandering tunnels revealed walls plastered with orange and yellow sponges and mats of intricate bryozoans interspersed with hydroids and anemones.

As the light faded the walls became less diverse but no less interesting. Blood-red beadlet anemones, juvenile crabs, scorpionfish and the occasional blenny all jostled for space in the darkness. At the end of the final dive, as we swam back to the cave entrance, we came across an unusually dense patch of plankton – tiny organisms floating just beneath the surface which had become temporarily trapped in the current. Among the plankton were some bizarre creatures including the rarely seen tiny pteropods (otherwise known as sea angels) as well as a couple of post larval monkfish.

Ragged and remote, North Rona is also full of vibrancy and colour. And while we humans may have long since left this rocky outpost behind, myriad lifeforms still call this place home.