I plunge into the ink blue wilderness of the southern Red Sea.

The sun slowly descends behind rolling desert hills in the distance. It’s last light casts golden beams through the water, guiding me into the depths as an angular shape materialises. Dark shapes circle us from afar, before moving in for a closer look. Today, I am finally granted the privilege of sharing the endless blue with a creature that has patrolled the world’s oceans for millennia. Carcharhinus Longimanus – the oceanic whitetip. A pelagic shark that spends its entire life cruising out in the open ocean constantly seeking out its next source of food. The name Longimanus refers to the shark’s distinctive large pectoral fins, translating from the Latin as ‘long hands’. Oceanics can grow to approximately three metres in length and can weigh up to around 170kg, making them a formidable apex predator.

I’ve travelled to the Brothers Islands, in the southern Red Sea, to try and encounter one of these incredible predators for myself. The offshore reefs here provide the perfect environment for oceanics and is now one of the few places on the planet where you have a good chance of seeing them. There are two words that sum up the demeanour of these sharks: ‘unnervingly confident’. These are not like any other sharks I have encountered before. Most shark species tend not to want anything to do with humans, so will swim off pretty quickly on approach. This isn’t the case with oceanic whitetips. Due to the emptiness of the open ocean, food sources are few and far between. Their experience is not dissimilar to hunting in a desert, so they investigate any object that’s in their vicinity, including divers. Ocean explorers like Jacques Cousteau quickly learned how this endless search for food dictates the oceanic whitetip’s disposition. When sharing the water with them they should be treated with utmost respect. Cousteau dubbed them the most dangerous of all sharks. They are opportunistic open water sharks that encounter food infrequently, so can’t afford to waste opportunities to feed. Like all sharks, they often use an investigatory bite to enquire further about unknown objects. There are still restrictions on safari vessels when visiting the Brothers Islands and other popular dive sites in the Red Sea after an incident involving a diver last year. The Brothers is a popular dive site where oceanic encounters are fairly common.

These are not like any other sharks I have encountered before. 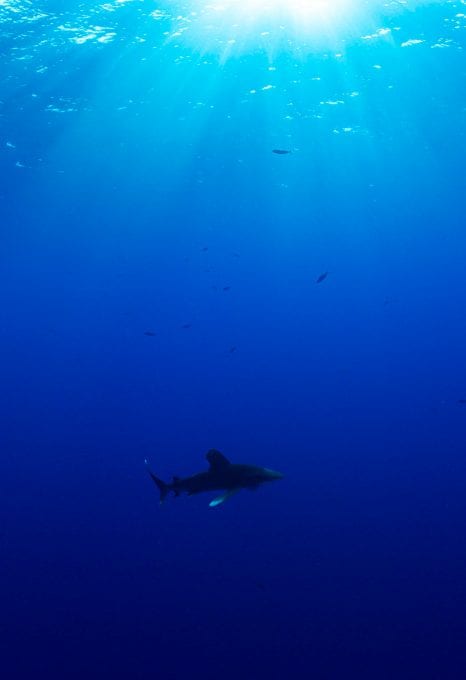 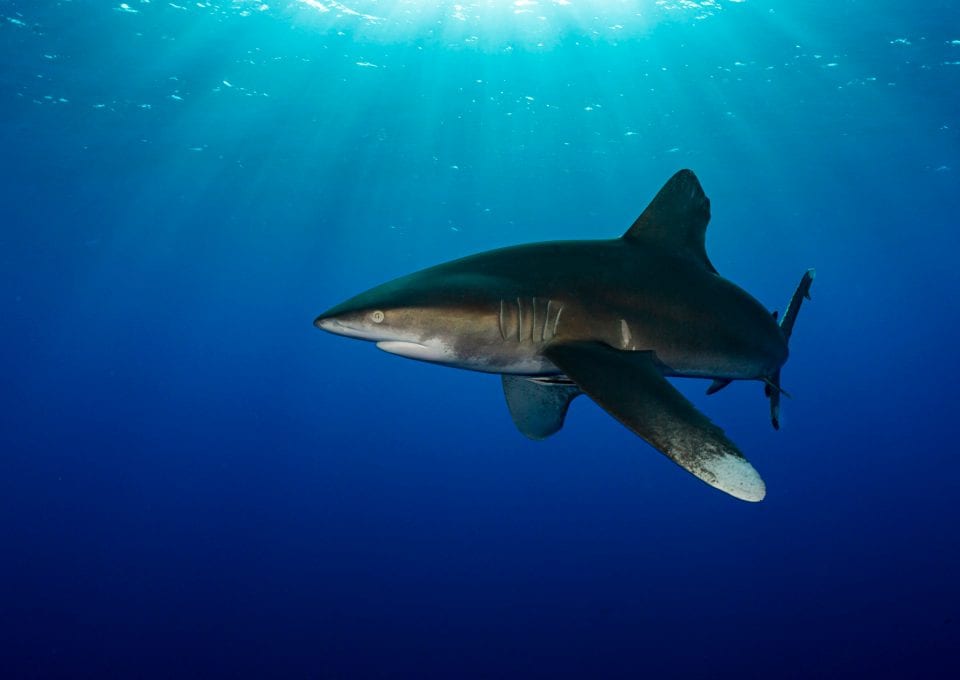 Although they are a potentially dangerous species, they are highly intelligent and not at all reckless. I spend nearly a week with them, diving with them three times a day, and at no point do I feel threatened by their presence. In fact, the more time I spend with them, the more I find myself in awe of them. They are the result of millions of years of evolution, fine-tuned to thrive in an almost featureless seascape.

As their name implies, oceanic whitetips have distinctive patterns of white markings on the tips of their dorsal, pectoral, and tail fins. Their fins do not have the typical pointed fins like most other requiem sharks. Instead, their dorsal fins and long, wing-like pectoral fins are rounded. I watch them use these long and rounded fins to glide effortlessly through the water. This is a vital evolutionary adaptation as this species needs to be constantly moving in order to keep water flowing over their gills in order to breathe. These unique fins almost act like a sail, reducing energy consumption whilst travelling long-distance. Oceanics can be found in all of the warmer seas of our planet. With such a vast geographic range oceanics often travel long distances in the pursuit of food and mates. Individuals have been tracked travelling more than 1,700 miles, utilising ocean currents to reach their destination. As a generally slow-moving shark, it has been uncertain how they manage to capture such fast-swimming prey. One interesting theory is that in low light conditions at dusk and dawn the distinctive white tips on the shark’s fins move fluidly together, while the rest of the shark is indistinct in the low light. It is thought to have the appearance of small school of baitfish. This false ‘school’ lures fast-swimming predatory fish close enough to allow the shark to quickly snap at its prey.

After millions of years gliding through the Earth’s oceans, oceanics have evolved into one of nature’s many masterpieces, adapting for life in one of the planets most hostile environments. A more recent threat now means that the future of oceanics is uncertain. Early reports written before the time of industrial fishing often commented on how abundant oceanic whitetips were in offshore waters all over the globe. Thomas H. Lineaweaver’s the Natural History of Sharks, first published in 1970, describes the oceanic whitetip as: “possibly the most abundant large animal, large being over 100lbs, on the face of the Earth.”

As longline fishing became a popular method of catching pelagic species, fishermen started stringing mile upon mile of baited barbed hooks for tuna and bill fish. Wandering oceanic whitetips became a very common accidental catch. A catch that provided an unexpected extra income as the appetite and demand for shark fin soup rocketed. As a result, oceanic whitetip populations plummeted, and this once globally abundant shark species started to become rarer. Towards the end of the 20th century an economic boom in China fuelled a market for shark fin soup, a trend that surged with the new wealth among the middle class. Although not especially targeted for their fins, oceanics were once readily available, with huge numbers being caught on the high seas. Nowadays, when landed at markets, the unprocessed fins can be identified visually due to their distinct size and shape. It is thought that of the identified fins entering markets in Hong Kong, 1.8% of them are from oceanic whitetips. From this, researchers have deduced that approximately 250,000 to 1.3 million oceanics are caught and killed per year for the fin trade. This combination ensured that in the space of a few decades there were dramatic declines in oceanic whitetip numbers. Catch rates for oceanics dropped by approximately 90% between 1996 and 2009 in the South Pacific.

They are the result of millions of years of evolution, fine-tuned to thrive in an almost featureless seascape. 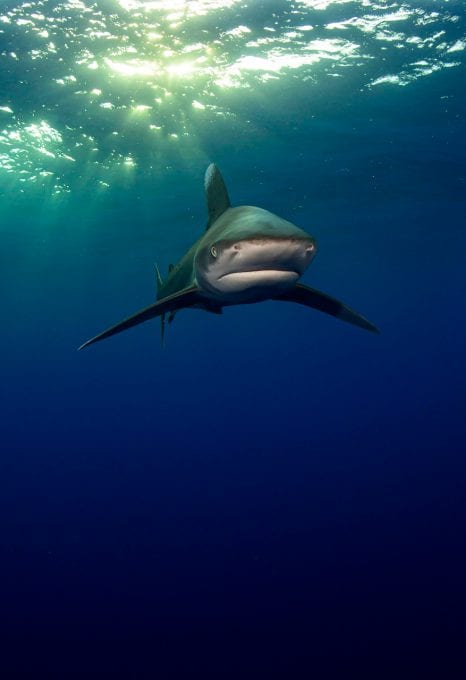 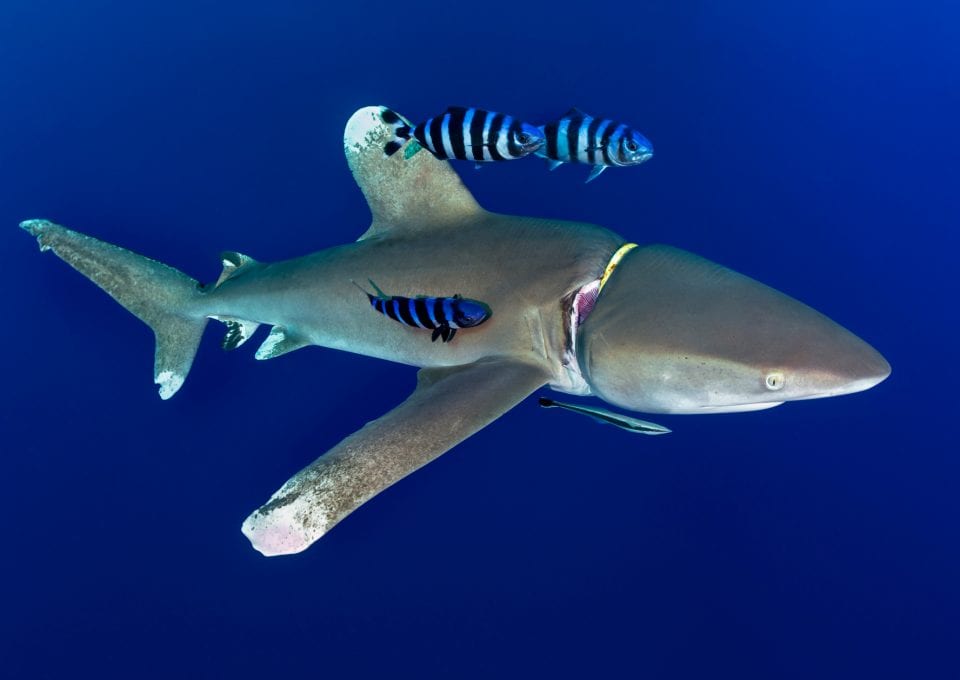 To be able to share the water with these sharks is humbling, an encounter that not many people will experience.

Whilst diving in the Red Sea I also witnessed first-hand another threat to oceanic whitetips – plastic pollution. One afternoon a shark arrived at the Brothers Islands with a yellow plastic regulator holder tightly constricting its neck. The regulator holder was most likely not discarded on purpose – I suspect it was accidentally knocked off a dive deck of one of the safari boats that dive the area. Once the bright yellow object hit the water the inquisitive nature of the shark would have investigated it very quickly, getting entangled in the process. This particular shark was well-known to the dive guides in the area and has been entangled for well over a year. The regulator holder had slipped over the shark’s head when it was smaller, so when we encountered it the yellow holder was alarmingly tight, breaking the skin and damaging its gills, becoming ever tighter as the shark grew. Fortunately, since my experience with this oceanic whitetip, the Hurghada Environmental Protection and Conservation Association (HEPCA) and the crew from Seafari Croisieres Mer Rouge have managed to catch the shark, bringing it alongside a zodiac in order to cut the regulator holder away. This is a reminder to all divers to maintain a clear dive deck and to ensure no waste enters the water from your vessel.

There are researchers carrying out incredible work on this now illusive species. There are still a lot of unanswered questions about the oceanic whitetip, due to its pelagic lifestyle and diminishing numbers. The Red Sea has seen vast swathes of its waters converted into Marine Protected Areas, many of which benefit oceanic whitetips that regularly pass through. Satellite tags have revealed that they are a highly migratory species travelling thousands of kilometres – it is suspected this is to get to their desired breeding grounds. While oceanic whitetips were granted an Appendix II listing under the Convention on International Trade in Endangered Species (CITES) in 2013, they are still listed as Critically Endangered on the IUCN Red List.

To be able to share the water with these sharks is humbling, an encounter that not many people will experience. There are still a lot of unknowns regarding the open ocean and many of its species, codes that we often crack when it’s a little too late. Continuing to research these pelagic wonders will hopefully ensure that their protection is expanded upon. Like all apex predators, it is vital that we safeguard this evolutionary masterpiece of the high seas sooner rather than later.

To be able to share the water with these sharks is humbling, an encounter that not many people will experience.

Adventure
Evolution of a seafarer
By Olly Hicks

Exploration
Into the dark
By Professor Finlo Cottier 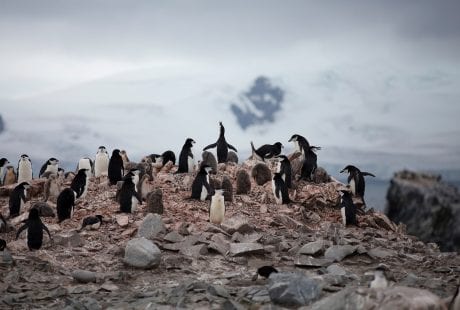 Conservation
The island of lost penguins
By Noah Strycker