After refuelling in Singapore, the MV Wakashio set sail on a voyage that would be its last.

Eleven days later, and less than a mile from the South-Eastern coast of Mauritius, the 300m Panamanian flagged bulk carrier ploughed into an ancient barrier reef system, estimated to be over 100,000 years old. The incident would prove to be catastrophic, with implications far beyond the shores of the tiny island nation.

After entering dangerously shallow waters on July 25, 2020, disaster struck the Wakashio. Despite calm conditions and clear visibility, the vessel, operated by Japanese shipping giant Mitsui O.S.K. Lines (MOL) smashed into a section of the country’s Eastern Barrier Reef, amid a network of highly protected international nature reserves, home to some of the rarest species on Earth.

For 13 days the world watched anxiously before currents, wind and tide began to pull the stricken ship apart, spilling 1,000 tonnes of toxic bunker fuel into the sea. The bizarre response that followed, handled by a group of expert international oil spill consultants, left many of the island’s residents, media and politicians puzzled and increasingly suspicious.

Amidst months of shifting stories, the true extent of the disaster continues to unfold and has shaken the country’s political system to its core, whilst raising some difficult questions of the global shipping industry.

the true extent of the disaster continues to unfold and has shaken the country’s political system to its core. 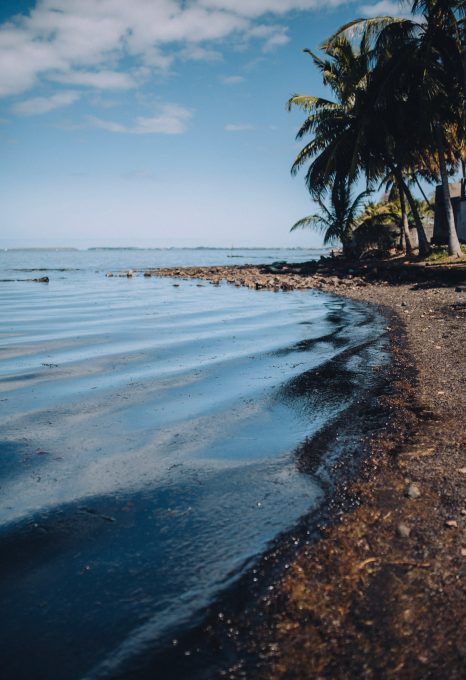 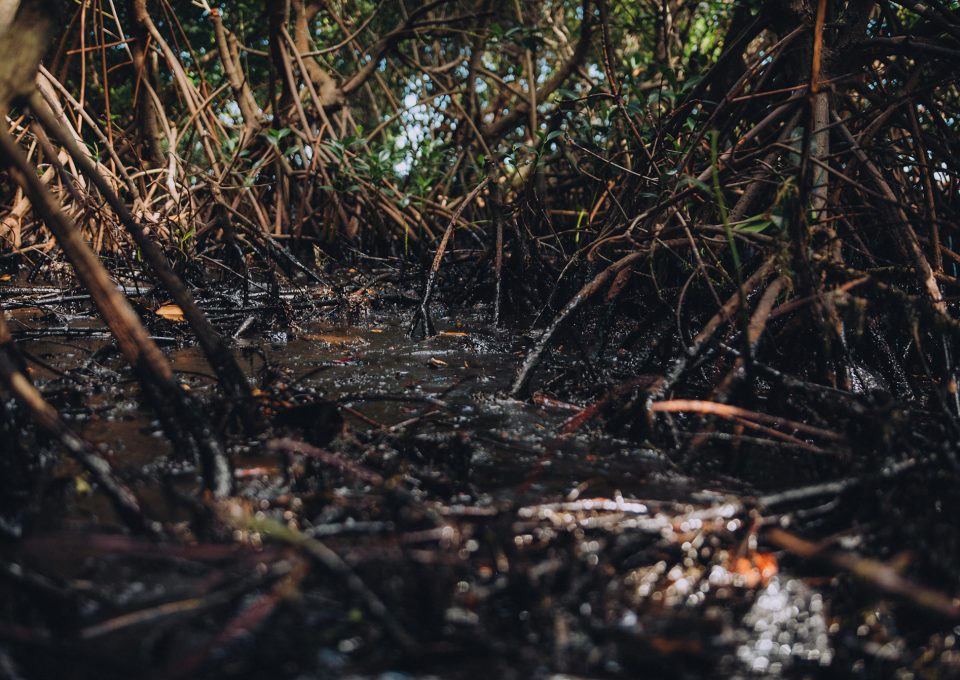 The Wakashio oil spill is particularly intriguing given it was the first to involve a new, experimental variation of bunker fuel known as Very Low Sulphur Fuel Oil (VLSFO). This controversial fuel was thrust into ship engines in January 2020 by the International Maritime Organisation (IMO) in response to criticisms over its reluctance to align the shipping industry with the Paris Climate Agreement.

The IMO instead focussed their efforts on another major air pollutant, Sulphur Dioxide, committing to an 85% cut in emissions by 1st January 2020. The decision landed the shipping industry with a significant chemical engineering challenge of inventing a fuel that would meet the IMO’s auspicious goal in an extraordinarily swift turnaround time.

After a whirlwind 14 months, widely believed not to have allowed for proper safety and environmental testing, the industry gambled on these experimental blends of oils and chemicals and the thousands of potentially unstable combinations they could take. The so-called ‘Frankenstein Fuel’ was born.

The oil’s green credentials were questioned in a study funded by the German government’s Environment Agency, prompting environmental NGOs to label the fuel as a ‘super pollutant’, calling for a ban on its use in environmentally sensitive regions. Safety concerns were also raised following a worrying spike in the number of incidents involving engine failure and other mechanical faults in the months after the fuel’s rollout, which could potentially place ships and their crews in grave danger.

With the onset of the COVID-19 pandemic, a collapse in global travel and an unparalleled fuel surplus within the aviation sector, the risks increased again. Reports suggest this surplus of jet fuel was mixed with ship fuel to create new, potentially dangerous VLSFO blends, capable of causing serious mechanical failures within a ship’s engine.

This begs an important question: Did the 4,000 tonnes of VLSFO in the Wakashio’s engines contribute to her running aground?

Responding to an extensive series of articles published in Forbes, BP asserts that the VLSFO it supplied to the Wakashio: “fully met the specified standard that is recognised across the international bunkering industry.” This claim is not yet supported by any evidence at the time of writing, despite requests by the Australian government’s Marine Safety Authority, which was tasked to conduct an independent analysis of the oil at the request of the Mauritian government.

Did the 4,000 tonnes of VLSFO in the Wakashio’s engines contribute to her running aground?

Mitsui OSK Lines also dismissed speculation over the fuel, stating there was “absolutely no evidence” of problems with the oil, or how its use in the Wakashio’s main engines could have caused the incident. It has however yet to explain manoeuvres identified by British satellite analysis firm, Geollect. These include a course change towards Mauritius, and an abrupt stop just days earlier in the middle of the Indian Ocean. Analysis suggests this mysterious five-and-a- half-hour period of drifting was consistent with engine failure.

As the Wakashio’s owners, operators, fuel suppliers, insurers, and state of registration continue to maintain the grounding was the result of human error and negligence, court hearings are currently taking place in the Mauritian capital, Port Louis. The vessel’s Captain, Sunil Kumar Nandeshwar, is alleged to have ordered the change of the vessel’s course, bringing her closer to shore whilst seeking Wi-Fi signal. Emerging testimonies also claim that crew members, including Nandeshwar, consumed alcohol on the day of the grounding.

Though, if this was simply a case of negligence, many rightly question the lack of transparency surrounding the response efforts, why so many basic protocols were seemingly tossed aside and why potentially crucial pieces of evidence remain absent?

The Forbes articles point out glaring omissions in the oil spill response. Notably in the immediate aftermath, where specialists should have moved quickly to collect oil samples for analysis, establishing how the chemicals might behave in the local conditions, which helps inform the response and clean-up efforts. Crucially, this helps gauge the risk to public health and safety, as well as the environment.

To date, the Woods Hole Oceanographic Institution has provided the only ultra-high-resolution analysis of the oil, based on a sample taken from floating residue 10 days after the initial oil spill. Scientists found a complex and unusual mix of hydrocarbons that were able to persist in the environment, though a fresh sample is needed to determine what had already been lost through evaporation, dilution and photodegradation. Despite multiple requests, no such sample has been presented by the vessel’s operator, owner, or fuel provider.

Scientists found a complex and unusual mix of hydrocarbons that were able to persist in the environment. 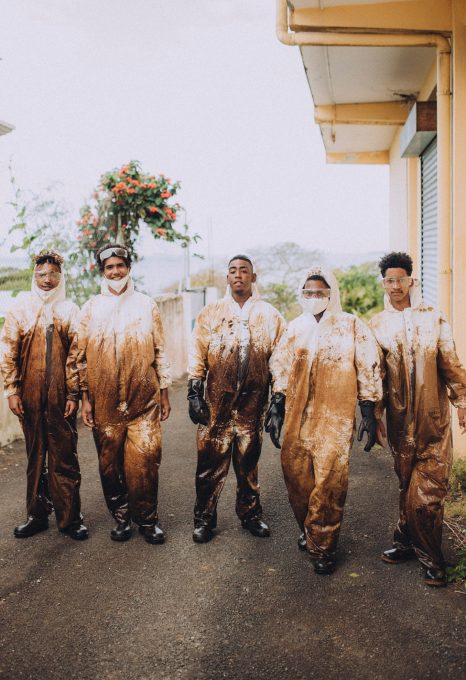 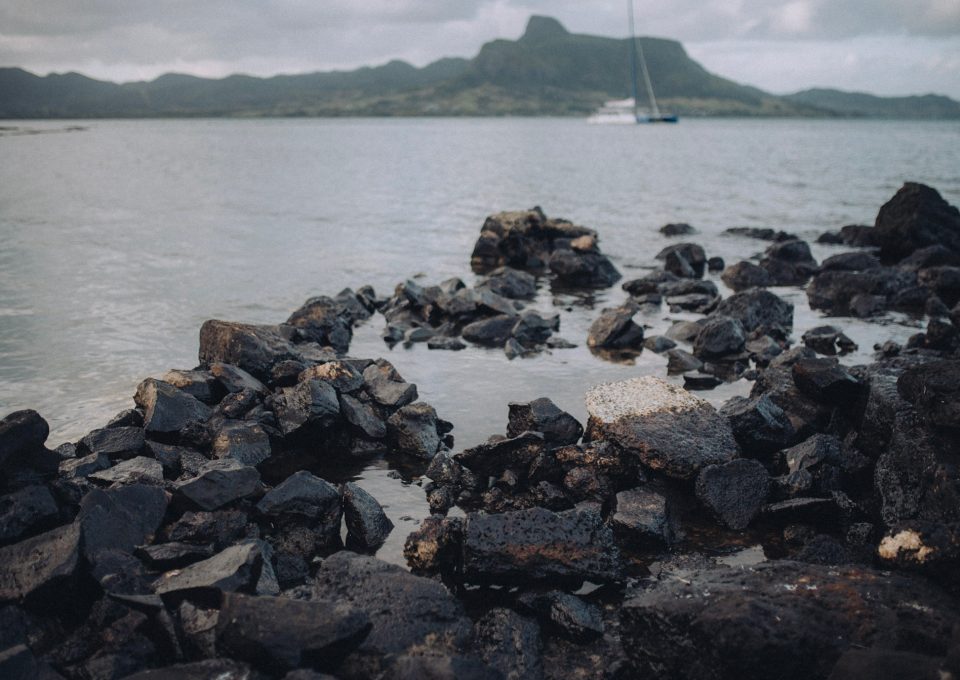 the Wakashio’s large bow section was sent to the bottom of the Indian Ocean, towed under the cover of darkness to an undisclosed offshore area, and deliberately sunk.

Amid mounting suspicion, the Wakashio’s large bow section was sent to the bottom of the Indian Ocean, towed under the cover of darkness to an undisclosed offshore area, and deliberately sunk into 2,000m of water. The mysterious scuttling meant that the Wakashio’s main fuel tanks and whatever evidence they could potentially hold were also lost to the depths.

When numerous dead whales and dolphins began washing up just days later, a hitherto unprecedented level of anger and political discourse took hold amongst Mauritians. This led to the largest protests in the island’s history when as many as 100,000 people took to the streets of the capital to demand transparency over the government’s response. To date, Pravind Jugnauth’s government has failed to reveal the results of the necropsies conducted on the 50 dead cetaceans, with estimates suggesting the grim tally was closer to 100.

Turquoise waters, white sand beaches and an abundance of marine biodiversity have long made Mauritius a haven for high-end tourism. The industry is an integral part of the local economy, in a region already reeling from the hammer blow dealt by the COVID-19 pandemic and subsequent shutdown of international tourism operations.

The ecological impact of the oil spill is severe. More than 30km of coastline was described as heavily damaged, and satellite imagery detailing how an area of coral reefs spanning more than 27 square kilometres was covered in oil. The oil also seeped into the island’s crucial mangrove and seagrass habitats, as well as contaminating miles of pristine shoreline; the impact of which may be felt for decades to come.

As many as 35,000 volunteers led stoic efforts to limit the damage and assist with the oil spill clean up by hand, often directly exposing themselves to the toxic fuel. Tragically, a recent study suggests as many as 1 in 6 of those with direct exposure to the oil are now experiencing related health problems.

As operations to remove the Wakashio’s stern which has blighted the horizon for months continue, there remains an uncertain prognosis for the island’s economic and environmental recovery, with far more questions than answers over the events that fateful evening.

the Wakashio’s large bow section was sent to the bottom of the Indian Ocean, towed under the cover of darkness to an undisclosed offshore area, and deliberately sunk.