Evolution of a seafarer

Evolution of a seafarer

A passion for minimalistic, human-powered expeditions has taken endurance athlete and ocean rower Olly Hicks to every continent and to every ocean. A world record-breaking adventurer, his brutal ocean crossings have taught him a little bit about solitude and survival. We sit down to find out a little more about the man behind the adventures.

Oceanographic Magazine (OM): How did you first connect with the ocean?

Olly Hicks (OH): My grandparents had a huge lake near their house in Derbyshire. We were always in that lake, swimming or messing around in old canoes. That was where I first connected with the water. I also grew up on the Suffolk coast, with the North Sea on my doorstep: brown, muddy water, stone shingle beaches and waves that would just dump on you, but when you don’t know any better… We also had a river nearby, so we had the best of both worlds.

OM: What captivated you about ocean rowing?

OH: I’m not very introspective, but I think it does all stem from childhood in a way, growing up on the coast and messing around in boats. I didn’t like any of the racing, but I loved exploring the creeks and going as far as I could on the river. When I was 13 my dad cut an article out of a newspaper about a man called Peter Bird, who died rowing across the Atlantic. That was really the start of it all. I’d never heard of ocean rowing before that and I was just captivated by the concept; the beautiful simplicity of getting into a teeny boat on one continent, and with no technical expertise, just rowing until you get to the other side.

OM: What is it about man-powered minimalistic journeys that appeals to you?

OH: The essence of all these projects is the ocean – it’s not really about the mode of transport. What appeals is being at sea. Solitude is a massive factor. Sailing is expensive and a bit more technical – there are so many bits of kit, so much clobber, and it’s not novel. Budget-wise, it was partly born out of practicality but, that simplicity of concept hasn’t changed much. Fundamentally it’s one person – or two or four – at the oars, and if they don’t row, they ain’t going anywhere. I think that’s the beauty of the challenge. When sailing you might make 200 miles while you’re asleep in your bunk, whereas in a rowing boat you might make miles, you might go backwards, you might go south, you might go north, and it’s that jeopardy of the unknown and the simplicity of challenge. You’ve got everything you need in your boat and you’ve just got to row. It just strips back all the complexity that we have to deal with in our daily lives.

I didn’t like any of the racing, I loved exploring the creeks and going as far as I could on the river. 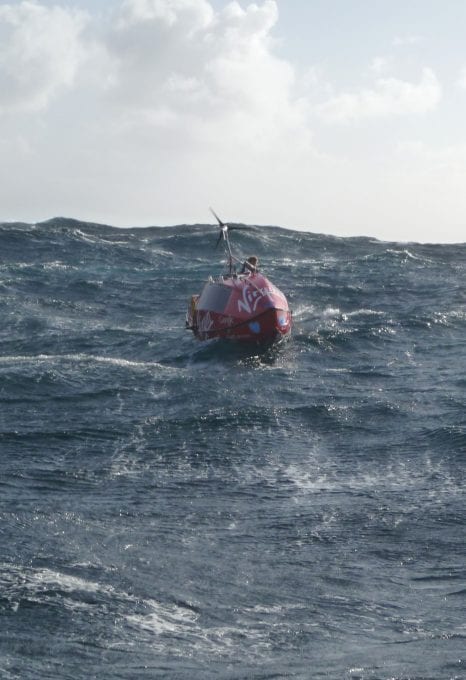 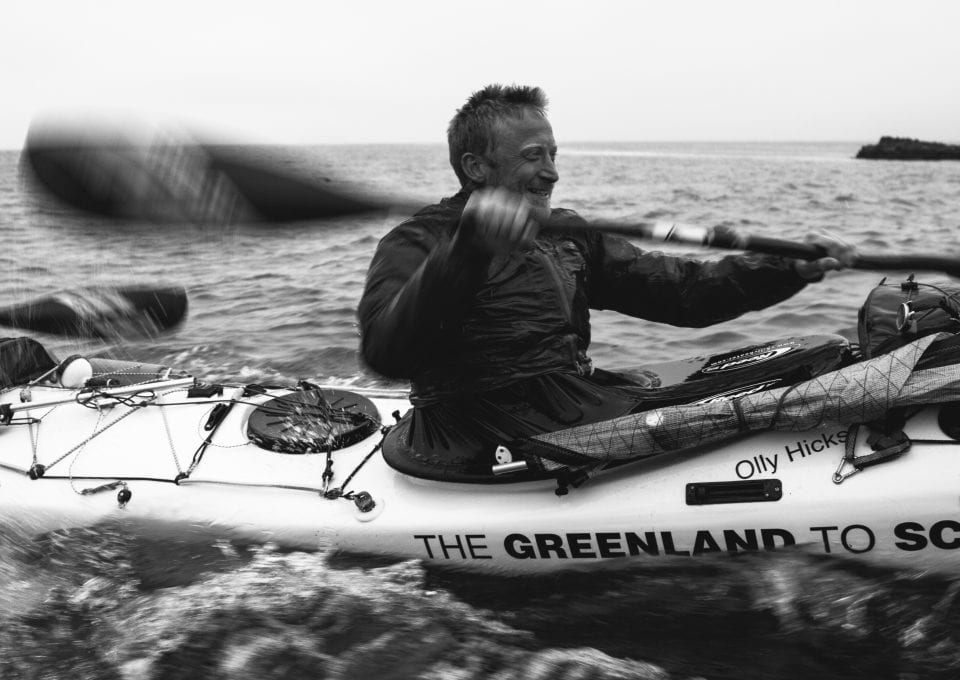 OM: What are the positives and negatives of being alone at sea for long periods of time?

OH: It’s a process, coming to be comfortable with the solitude. As you break away from society and from company, it takes some time to adjust to not having anyone to talk to and not having any physical contact. That’s quite difficult. I guess you kind of crave it to begin with and you love seeing the aeroplanes and other boats, because it gives you some connection to humanity. But then as that fades away and you get more comfortable being alone, I think it almost becomes intrusive when you see aeroplanes and boats. I started freaking out about having to reintegrate back into society towards the end of my Atlantic crossing and I was terrified about landing. Broadly, being alone on the sea was hugely positive, I loved it. I wasn’t racing – often these crossings are made in a race or in teams. I could set my schedule; if I didn’t want to row one day, I didn’t have to row. I could go fishing, or swimming, or sunbathe, or sort the boat out. So being able to dictate your schedule as you see fit is a luxury.

OM: Let’s talk about Greenland to Scotland. What was it that really caught your eye about trying to replicate that historical journey?

OH: It all came about through a relationship with a great guy called Patrick Winterton. I saw he’d done a trip kayaking from Scotland to the Faroe Islands – it got very little coverage, but I was blown away by it because I’ve always been fascinated by small-boat voyages. I got in touch with Patrick and very quickly we became friends. He’s quite persuasive and he twisted my arm to join him on a trip across the North Sea to re-enact a World War II operation called the Shetland Bus. We had no sponsors, no money, no time and very little training beyond a training weekend in Anglesey. It took three attempts to get across, and even then, we were lucky because we couldn’t self-right the boat, so if it capsized, we’d have been in big trouble. All of these journeys built up into this experience and knowledge bank of how to make long journeys by kayak in really difficult and cold conditions. When we landed in Bergen on the Shetland Bus, we crawled out of the boat, we couldn’t walk, and we said we would never get in a kayak again.

A week later Patrick phoned me up and told me about a book called ‘Searching for the Finmen’, by Norman Rogers. It’s all about how the Inuit may have come to Northern Europe by kayak in the 17th century, all based on the story of the Inuit tribesman washing up in Aberdeen in 1728. The boat is in a museum in Aberdeen – it looks like a bit of old shoe leather. The idea was that Patrick and I would do that journey, but then Patrick had his first child so had to drop out. I got in touch with George Bullard and we made the journey.

It’s a process, coming to be comfortable with the solitude.

OM: Is there a particular memory from that crossing that will stay with you?

OH: What you realise is that the world is so small now and equipment is so good that even these arduous expeditions, with careful planning and the right equipment, are not nearly as arduous as they may appear. What is out of your control is the weather. Once, between Iceland and the Faroes – there’s a bit of water called the Devil’s Dance Floor – we got picked up by a fishing boat who told us there was a hurricane coming. We took their ride and ended up working on this boat for a week catching cod. Then on the next leg from the Faroes to Scotland, again the weather was going to turn against us, and we had to re-route to an island called North Rona 50 miles north of Scotland. It’s an uninhabited island and we didn’t know what was there or how to land on it. We got stranded there for about a week. We had to forage for food, had to find a landing place, had to lash our kayak into a cave, and wait for the weather to change. It was only 50 miles north of our finish point, but it felt like we were on the edge of the world.

OM: What can adventure into nature do for everyday life?

OH: I think it’s similar to what we now call mindfulness. It’s that recalibration of what’s important, having that thinking time. We’re here for a short amount of time and you have to decide how you want to spend it. It really is a luxury being able to do those trips. Especially now with a young family. I have a long list of boat journeys I would like to make in my life, and if I’ve made them all by the time I get in my box then I’ll be – I don’t know if I’ll be satisfied or fulfilled – I’m not sure that is something that you ever get to. For some people it’s mountains; for some people it’s oceans. It’s all about how and where you want to spend your time. It’s being content with your lot and that’s why it’s quite difficult for me in that I’m not content – I always want to be doing expeditions and it’s not necessarily compatible with real life, or normal life.

It’s that recalibration of what’s important, having that thinking time.

OM: Do you think adventure and exploration can go hand in hand with sustainability?

OH: Sustainability is such a broad and complex topic. I think it’s really hard for us as lay people to articulate the problem with accuracy. I have a slightly cynical view of the human race, that we are quite greedy. Can we make things more reusable and more circular? We can get better, and we can become more sustainable.

If you boil it down to the microcosm of adventure and exploration, it’s really interesting. People are trying to improve. The trouble is a lot of it entails international travel, which is not great. If you take yachting, there’s a lot of these incredible carbon fibre boats being built; they are moving towards using more eco-friendly materials, more recyclable materials, but it’s a long way from where it needs to be. The other hat I wear in life is running the Arksen Foundation. Arksen is interesting because it’s a commercial company building explorer vessels. On the one hand you’d argue the world probably doesn’t need more boats, but if you accept that people will always want boats and recreational time, the question then becomes: how can we go about making that recreational time as good – and sustainable – as it can be? That’s the rebalance Arksen are trying to achieve. Broadly though, I don’t think the adventure community is any better or worse than any other area of society. I guess it comes down to the individual.

OM: How does the Foundation operate within the wider Arksen business?

OH: You’ve got to differentiate Arksen Marine – the boatbuilding, for-profit part – and the Arksen Foundation. Arksen Marine is very much trying to change people’s behaviours. These large yachts are often under-utilised, they’re bad on emissions and ecologically, the construction could be improved. We’re trying to create a paradigm shift in both the construction of the vessels and their usage profiles so that, for the periods of time that these vessels aren’t being used recreationally, we can use them for science or conservation purposes via the Foundation. That’s the Foundation’s purpose – working to support ocean conservation, restoration and science.

Our lead campaign is called 10% for the Ocean, through which we are building a super fund for the ocean – creating a new funding mechanism for the world’s largest ecosystem. It currently gets less than 0.5% of all philanthropic funding in the world, so it’s a pretty broken model, which is something we’re trying to redress. It’s also trying to bring the problem to people in a way that makes the ocean relevant to them, as most people feel that it’s not. But as soon as you realise that every second breath comes from the ocean, and some of the latest cancer cures are coming out of coral reefs that we’re killing, then suddenly it makes sense to be putting resources back into the ocean. The future of humanity relies on it.