“Sharks I once saw regularly had disappeared…”

Having spent most of her childhood in or on the water, Madison Stewart’s passion for the ocean and its protection is insatiable. After years of witnessing first-hand the degradation of the marine ecosystem and the exploitation of its inhabitants, she created Project Hiu in order to convert shark fishers into eco-tourism guides and change the vilifying narrative surrounding them. You can find out more about Project Hiu in Issue 12 of Oceanographic, but here we catch up with Madison – oftentimes known as Shark Girl – about her experiences in the world of shark conservation activism.

Oceanographic Magazine (OM): When did you first connect with the ocean?

Madison Stewart (MS): From the age of two I lived on a sailboat, so my connection started early. I don’t remember a defining moment; it’s just always been my norm and my life.

OM: What was it like growing up at sea?

MS: Wild animals were just something you expect to see every day, to the point where they become as normal as a house pet. You have difficulty adjusting back to normal life after being surrounded by wilderness, and many memories of mine of this time seem so far-fetched now, like living a dream.

OM: As a child you were faced with the reality of the threats to sharks and our oceans. What happened?

MS: When I was 14, there was a place that I grew up diving as a kid, which started to show the first signs of human impact. Sharks I once saw regularly had disappeared and the reef began to degrade in their absence. There is no feeling worse than knowing the spots you love and thought were safe were not out of reach of the people destroying the ocean.

Wild animals were just something you expect to see every day. 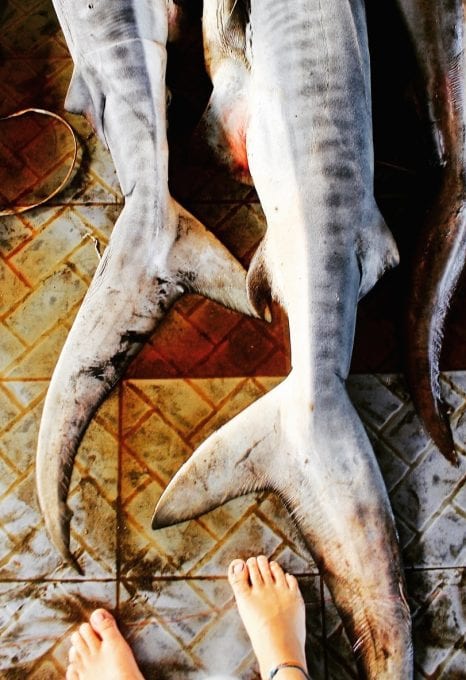 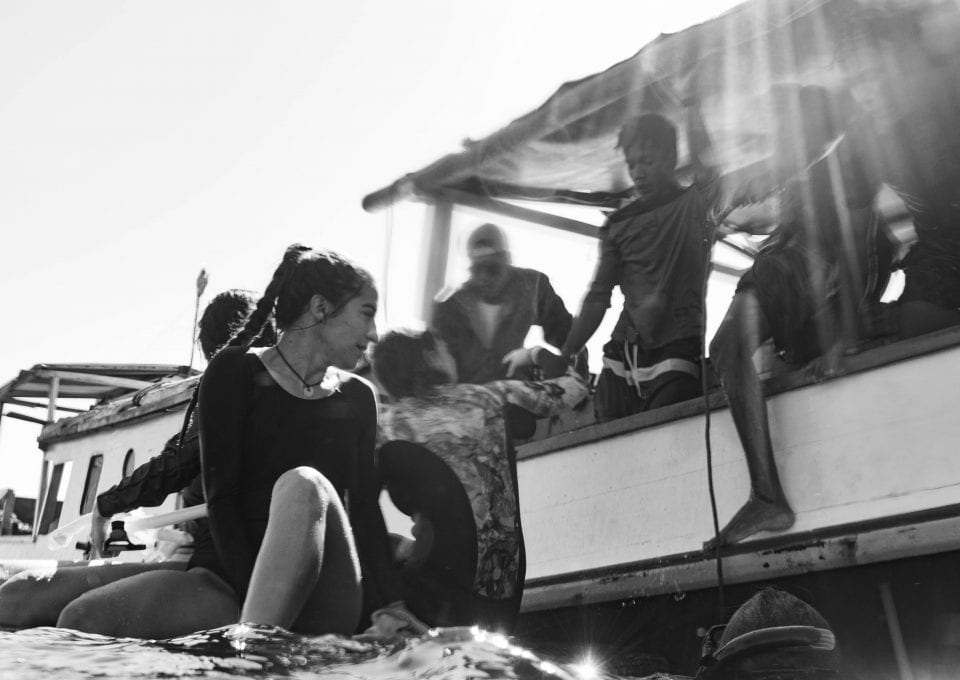 OM: What impact do you think ‘Shark Week’ has had – and currently has – on people’s perceptions of sharks?

MS: I think shark week merely enforces what the movie Jaws began. I think, however, that hiding behind the theme of ‘documentary’ it is even more damaging as it carries some sort of legitimacy to its fear mongering.

OM: Why do you think shark finning laws are flouted on such a massive global scale?

MS: The same reason the drug trade is, if you think about the places around the world where the fin trade is strong, they aren’t developed places. They are poorer communities who are desperate to live and earn money and they are the ones willing to take a risk for a prize like the shark fin.

OM: How do you cope with being exposed so frequently to the illegal wildlife trade markets?

MS: I don’t. It has – and will – forever affect me, but if I didn’t see it, learn from it or be involved in it, I’d have no impact on it. One of the worse things is returning back to everyday life amongst people who cannot relate to the level of drama you want to create over the current state of the world because they haven’t seen the things you have.

OM: What are the key loopholes in current shark finning legislation that you’re fighting to be closed up?

MS: Some of the key loopholes that I find to be the most shocking are actually in countries like Australia and the USA. Laws like the shark fin ban seem like a good thing, but have so many loopholes that they don’t really solve the issue. One that stands out to me in the fishing market I deal with in Indonesia, is the ability for an export company to obtain a permit that allows them to transport species that should be protected. 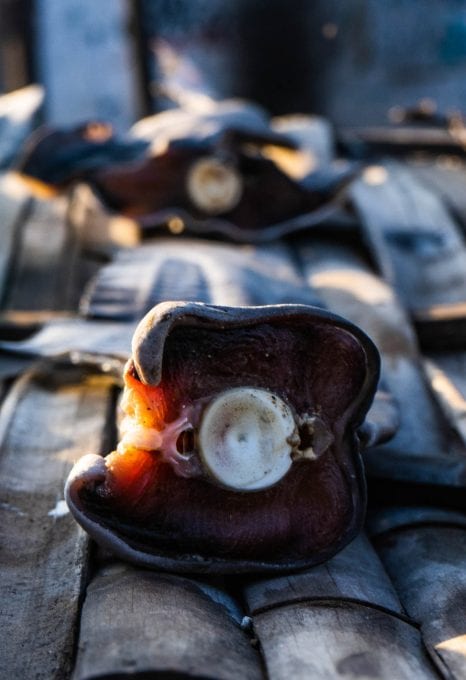 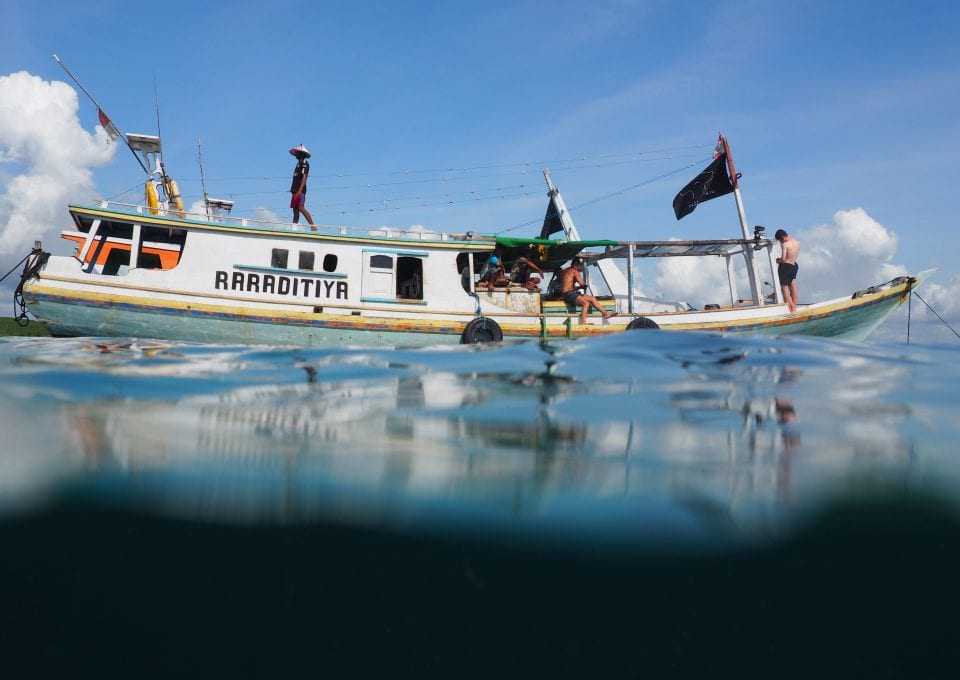 I never expected to be helping people so much but it’s been my most effective way into impacting this trade.

OM: When was Project Hiu launched and when did you convert your first shark fisher?

MS: The first day of Project Hiu started with one particular fisherman who still works for me now. It’s not been a quick process, but eventually I was able to keep his boats back for an entire year. Meeting him was interesting, he was unloading sharks from his boat and he was very cautious of me. I convinced him to let us use his boat for the next week to explore. One thing I’ll never forget, is how quickly the boat went from being covered in dead sharks and reeking one day, to being spotless and clean for us the next.

OM: Why was it important to you to change the narrative from shark fishers as the villains to becoming the heroes?

MS: Because it was effective and because conservationists can sometimes be more damaging to their cause by inadvertently placing themselves above others. This, however, prevents us seeing things clearly and seeing that the men who are killing sharks as less of an enemy and more of an opportunity for change.

OM: In what ways does Project Hiu support the entire local community and did you expect it to go in this direction?

MS: Project Hiu employs a few of the many shark fishermen in this area – this creates jealous and push back from the community. However, by helping the island and the school for example, with educational materials and clean water and simple things a community deserves, it makes anyone that opposes my presence a public enemy to the many benefiting from these contributions. I never expected to be helping people so much but it’s been my most effective way into impacting this trade.

OM: What is the average mark-up on a shark fin from Indonesian fishers in a market?

MS: It does differ from species and weight and the current market, but I have seen a large shark sell for $25 AUD and the same size fins go for $1000AUD per caddy.

OM: What are your next plans of action for Project Hiu?

MS: My plan is to jump in as quickly as I can to offer other fishermen jobs in light of the current lack of demand on the shark fins and the price of petrol. Fishing trips require investments, and this will be difficult after the pandemic as no one is making money, which could be a great opportunity to run trials with new potential employees.

Read the full story of Project Hiu, ‘From predator to protector’, in Issue 12 of Oceanographic Magazine – available worldwide.

I never expected to be helping people so much but it’s been my most effective way into impacting this trade.