I was sitting on the bow of our research vessel when they started to swim closer to me, soaring through the waves below.

I watched their large dorsal fins emerging from the surface of the water, heard their chatter and the sound of their powerful blowing spouts and watched their unique profiles darting around the helm. I knew they were looking at me. It was during this moment of eye contact that I felt the strong impulse to protect these giants of the sea. I will never forget the first time I encountered a pod of Risso’s dolphins. From that moment, a connection was made and I decided to dedicate my time to studying this little known species of cetaceans in the Mediterranean.

Among the countless amazing species and creatures living on our planet, a group of them have managed to grip my heart: cetaceans. These incredible animals have evolved over millions of years of adapting to life in the big blue. Dolphins and whales play an important role in ocean legends worldwide but they also play a key role in the ecosystem, that of predator and bio-engineer of their native habitats. Nowadays, there are 80-90 known species of cetaceans, and they have colonised every marine habitat, from the pelagic off-shore waters to the near-coast habitats, from estuaries to freshwater rivers.

Cetaceans should be well-studied and protected, but the reality is different. Many threats like pollution, over-fishing and whale hunting are compromising their survival and even our “love” for them can be the cause of many problems – they do not fare well in captivity. For this reason, a group of people in Taranto, an Italian town in Puglia, lead by Carmelo Fanizza, decided to dedicate their lives to observing, studying and protecting these creatures and, in 2009, they founded Jonian Dolphin Conservation (JDC). This scientific NGO sails out on the Gulf of Taranto, the Northern Ionian Sea, thanks to its citizen science initiatives. The “researcher for a day” programme invites guests on board to help the team collect data in order to better understand and preserve the several species of cetaceans living in the area. Striped, bottlenose, common dolphins and sperm whales are observed every year but one cetacean species in particular is catching the attention of the JDC in the last couple of years: Risso’s dolphins.

I knew they were looking at me. It was during this moment of eye contact that I felt the strong impulse to protect these giants of the sea. 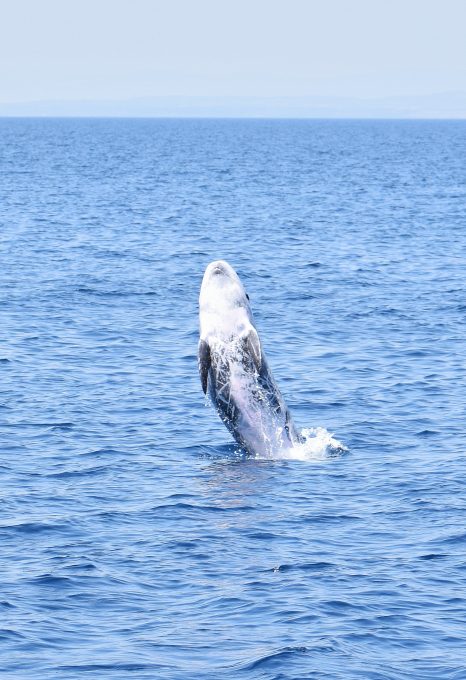 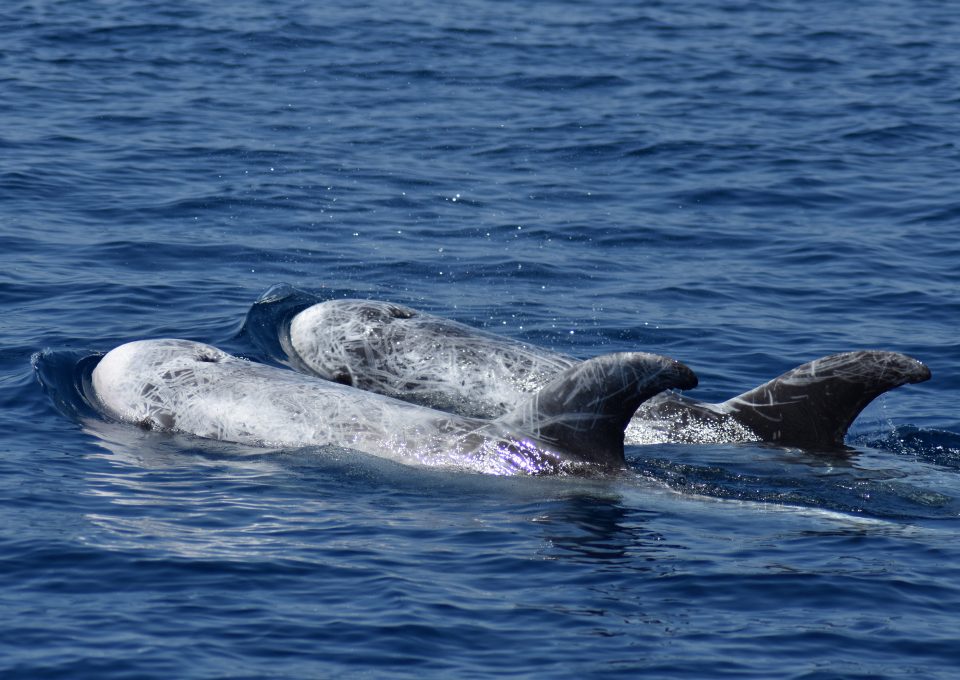 Risso’s differ massively from the typical dolphins that people usually picture. They measure around 3-4m and can weight up to 500kg. They are characterised by a large dorsal fin and a rather bulbous head. They mainly feed on squid and have very few teeth – none in the upper jaw and just a few pairs in the lower. Their colouration is another particularly intriguing characteristic of the species. When they are born they are dark grey, then they become pale grey when they are juveniles. By the time they are young adults, they are dark brown and during their journey into full adulthood they become whiter. Adult males are almost completely white except for the dorsal fin and females are a bit less so, with some areas of dark brown skin still visible. Their most noticeable characteristic is that their bodies are unusually heavily scarred. Scarring is a common feature in toothed whales, but Risso’s dolphins are, without any doubt, the most scarified cetaceans. It’s mostly just down to social interactions and tussles among themselves, but other causes of scars can be their contact with prey, such as squid and octopuses.

These scars make it possible to photo ID and classify every single Risso’s dolphin we encounter. In the last few years, the JDC has collaborated with the Italian National Research Council (CNR) and the Department of Biology at the University of Bari, to develop an innovative system to easily identify these animals using Artificial Intelligence.

They have created the first automated tool for Smart Photo Identification of the Risso’s dolphin (SPIR). This approach provides the capability to collect and analyse significant amounts of data acquired over wide areas and extended periods of time. This effort establishes the baseline for future large-scale studies, essential to providing further information on the distribution of Risso’s dolphins. The project is evolving more and more and a first catalogue of identified Risso’s dolphins of the Gulf of Taranto is present on the platform called DolFin. The Mediterranean sub-population of Risso’s dolphins is classified as DD (Data Deficient) by the IUCN (International Union for Conservation of Nature). The JDC researchers and their partners observe the Risso’s population in the Gulf of Taranto and monitor the lives of the single individuals over a number of years.

Their most noticeable characteristic is that their bodies are unusually heavily scarred. 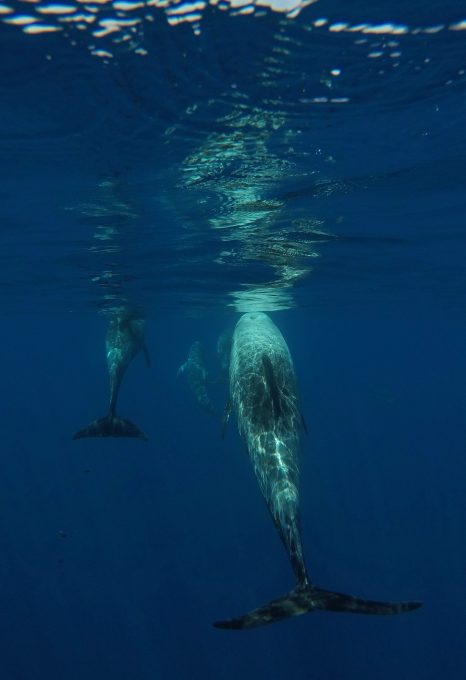 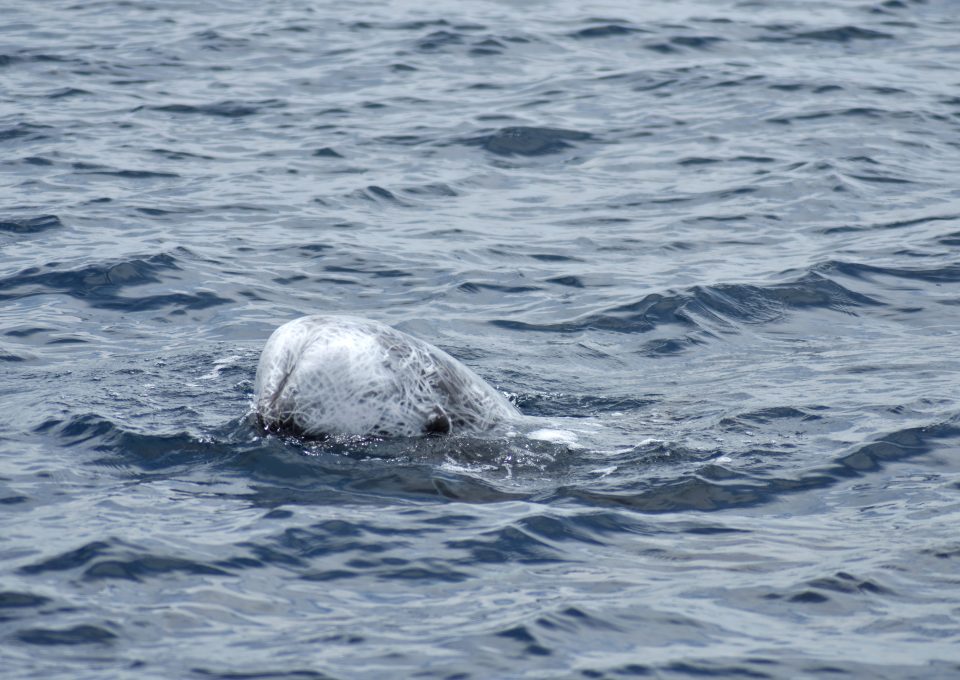 They are wild animals. I cannot be sure of what they think of me but I know they understand that we are harmless.

Tigre, Mario, Surf, Black, Seven and Wolverine. These are the names of six of the 93 monitored Risso’s dolphins of the Gulf of Taranto. Thanks to this level of knowledge, now, the group of researchers has a new goal: to understand the social structure and the inter-animal relations among these individuals. The social habits of Risso’s dolphins offer another peculiar characteristic of this species. Unlike other dolphins, who live in a fission-fusion society (one that changes in size and composition over time and during a change of environment) or sperm whales, who utilise matriarchal units, Risso’s dolphins have a stratified social organisation. Their pods are, in general, typically formed by 10-50 individuals, but they can sometimes form “super-pods” reaching up to hundreds or even thousands of individuals. Thanks to the collaboration with a researcher that has been studying these animals for twenty years in the Azores Archipelago, the JDC researchers are observing that perhaps small, stable subgroups exist within larger groups and that these groups tend to be similar in age or sex. Risso’s dolphins are loyal to their groups. Long-term bonds are forged among adult males and mothers also show a high level of allegiance towards a group of mothers and calves. Younger individuals show less fidelity and can leave their native group to join others.

Every year the number of of Risso’s sightings in the area is growing. The researchers and guests on board during citizen science projects have spotted large males already known in the area but have also noticed the presence of new individuals. They have recognised the female groups with their calves, as well as a new-born calf. A lot of data has been collected and analysed by the JDC team and their partners about identification, ethology and the underwater acoustics of these amazing creatures. This knowledge is the baseline of the conservation of Risso’s dolphins and the several species of cetaceans living in the basin and, as well, the baseline of the sustainable management of a hot-spot of biodiversity represented by the Gulf of Taranto.

When I see some of the dolphins that we have previously identified return after some time, I am elated. Back in April, I was overjoyed to spot Mario, who was one of our first calf sightings of 2018. We called him Mario because of a distinctive M-shaped scar on his right side. I was so impressed to see how much he’d grown in just one year. During the first sightings he was just a small calf always swimming close to his mother, never approaching our boat. This year, this young male Risso’s was braver and more curious, so he started to swim alongside us. Behind him, his mother (we’ve named her Surf), watched on, never letting him go too far without her. I used a paddleboard to observe them more closely and to record their underwater behaviour without any sound disturbance. At first, I was approached by few large males and, I have to admit, I was a little scared. But they just checked to see if I could be a potential risk for them and then, they passed under my board. After some time, Mario came close to inspect the strange object (my camera) that was in the sea. They are wild animals. I cannot be sure of what they think of me but I know they understand that we are harmless.

I collect important underwater videos and pictures of the secret life of the amazing Mediterranean sub-population of Risso’s dolphins. Hopefully, they will contribute to a better understanding these animals, in order to protect their habitat and their lives.

They are wild animals. I cannot be sure of what they think of me but I know they understand that we are harmless. 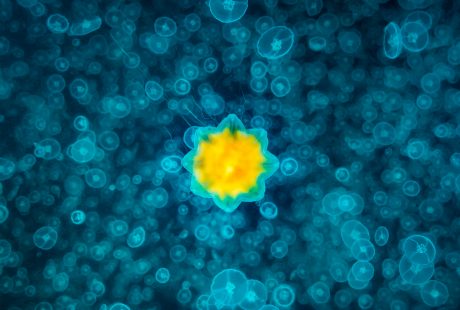