Roses of the deep

Roses of the deep

“WE REALISED THAT, AFTER MORE THAN 20 DEEP DIVES, WE STILL HAD NO IDEA OF THE LIMITS OF THE REEF WHICH SEEMS TO BE ONE OF THE BIGGEST DEEP REEFS IN THE WORLD.” – ALEXIS ROSENFELD

A pristine coral reef off Tahiti has recently been found at unexpected depths. The condition of, and extensive area covered by, the rose-shaped coral reef make it a highly valuable discovery. In this interview underwater photographer Alexis Rosenfeld and coral expert Laetitia Hedouin shed some light on their exciting expedition.

Oceanographic Magazine (OM): Alexis, how did you get into underwater photography?

Alexis Rosenfeld (AR): After discovering diving at the age of eight, I have never stopped to explore the underwater world since. My journey allowed me to share Commander Cousteau’s last expedition to Madagascar through my lens and to participate in exceptional adventures such as the discovery of the wreckage of the Antoine de Saint-Exupéry’s plane. Dazzled by the beauties and mysteries of the oceans, I have tried to become an actor of the environmental cause over the decades because the oceans are increasingly threatened by global warming, acidification phenomena, excessive mass tourism, fishing and maritime trade.

OM: The exceptionally deep pristine coral reef off Tahiti that everyone currently talks about was found by a team of divers mapping the ocean floor for the 1 Ocean project that partners with UNESCO, CRIOBE, a French laboratory studying coral reefs and the French National Centre for Scientific Research. Alexis, what is the main aim behind the foundation of the 1 Ocean campaign of which you are the team leader?

AR: ‘1 Ocean, The Anatomy’ is a decade of exploration supported by UNESCO. For the next ten years, we will explore the underwater world to witness its beauty and the dangers that threaten it, while we meet the scientists work to understand and preserve it. During the ten years, the team, led by me, will mobilise the most innovative ways to meet little-known marine ecosystems and the scientists who work for their preservation. Ultimately, we will produce photos, video footage and interviews to allow as many people as possible to discover the wonders of the ocean, but also all the dangers that threaten it and the solutions available to protect it.

Currently, we’re working on exploring the deep, pristine coral reef off Tahiti that seems to be in perfect health, together with the scientist Laetitia Hedouin of the CRIOBE CNRS. During the months to come, we’re going to keep exploring the ‘super corals’ found on the reef as they seem to resist climate change. Working alongside the scientific team, we hope to establish how and why these corals are so resistant.

We hope to establish how and why these corals are so resistant.

OM: How exactly did you find this special coral reef near Tahiti?

AR: A marine biologist whom I had worked with before, Gilles Siu, told us about this extraordinary place. The local population knew about the reef but it has never been explored or studied before. That’s why I decided to organise an exploration mission alongside Laetitia Hedouin and her scientific team to try to figure out the width of this reef. We realised that, after more than 20 deep dives, we still had no idea of the limits of the reef which seems to be one of the biggest deep reefs in the world.

OM: What were your initial thoughts when discovering the pristine coral reef off Tahiti?

AR: The first dive we undertook was with the 1 Ocean team and Roberto Rinaldi, the director of photography who I worked with years ago in Cousteau’s team. It was amazing to discover this magical underwater landscape, made of giant coral roses that were full of life. It was fantastic to see such a preserved ecosystem because today, we primarily hear about the negative effects of climate change and pollution on marine biodiversity.

On this precise reef, we found two or three main coral species. In comparison, on ‘classical’ reefs that can be found at shallower depths, you can find much greater biodiversity. In Polynesian waters, the majority of marine life can be found around the atolls. However, we were able to see amazing fields of Gorgonians, some of which are still unknown species, close to the deep reef. Furthermore, we found two main types of corals – porites rus and pachyseris – and interestingly, they became wider the deeper we dove.

Interestingly, they became wider the deeper we dove. 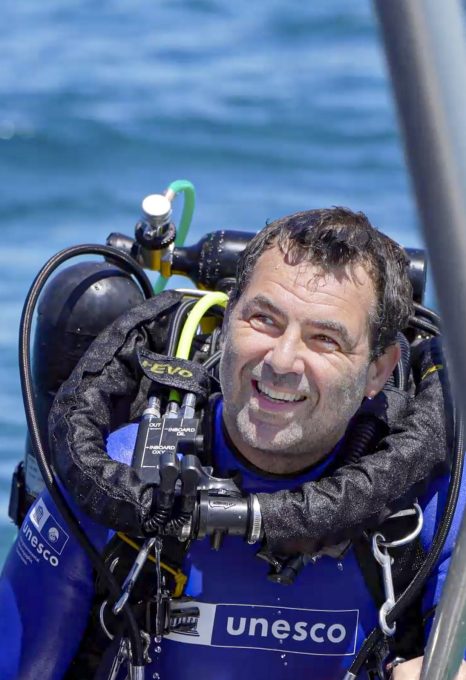 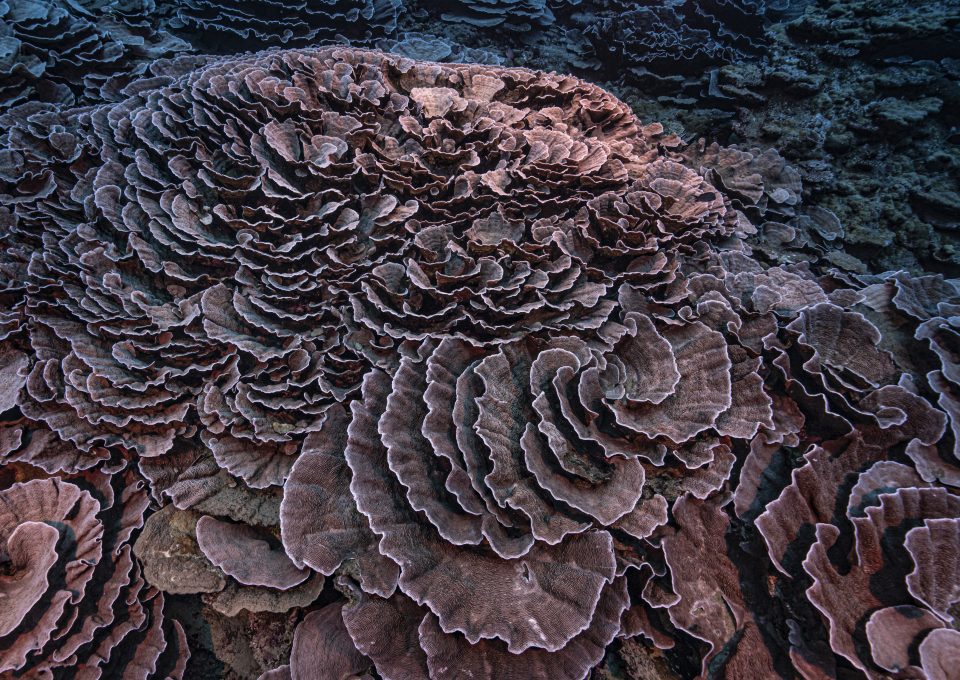 OM: What makes this pristine coral reef off Tahiti so special?

AR: First of all, it was extremely healthy and alive. It is also special because we found it at a depth of 100 metres and beyond. We know coral reefs well that can be found at depths of between 0 and 20 metres which are important for biodiversity and protecting the coastline from storms. However, with this deep reef, we realised that there are also very crucial ecosystems under the 35m mark.

Laetitia Hedouin (LH): This part of reef is special because it lies between 30 to 60m and has a very high coral cover that can reach up to 70%. In general, coral cover decreases with depth because corals are organisms that live in symbiosis with microalgae inside their tissues that need light to do photosynthesis. So, usually coral cover should be lower the deeper we get. On this reef, however, we have found an exceptional coral cover in the deep. Furthermore, this part of the reef is very long as the reef extends for 3km, and potentially more. It is a very long area that is covered by giant rose-shaped corals. This form of coral is not unusual at these depths as corals become flatter the deeper they live to maximise their ability to capture light. But what’s impressive here, is the size of the roses as well as of the colony. Some had a diameter of over 2m which means that they are at least 20 years old. And corals that have been able to survive through the last two decades without being impacted by human activities are really rare today.

OM: What kind of research was done during the expedition what is currently done?

LH: We primarily tried to characterise the reef. We undertook photogrammetry of the reef from 90m to 10m. We used the photoquadrat survey technique to estimate coral cover, the diameter of the colony, and the reef’s general health state. Right now, we hope to secure more funds to develop a monitoring station at the location with temperature loggers and other measurement options so that we can survey how this special reef deals with temperature changes and other factors throughout the next few months.

Corals that have been able to survive through the last two decades without being impacted by human activities are really rare today.

That’s why we do believe that depth protected these reefs from the last bleaching events in the area.

OM: The reef seemed unaffected by coral bleaching events that influenced nearby areas. What could this mean?

LH: It is likely that its depth protected the reef from the last bleaching event that occurred in 2019. Indeed, bleaching is a combination of high seawater temperature and high irradiance. In deeper water columns, you have less light, so even if an abnormally high temperature occurs, corals can still face this, because light does not exacerbate the stress. That’s why we do believe that depth protected these reefs from the last bleaching events in the area.

OM: The reef was found at unusual depths. How does this affect our understanding of coral reef ecosystems?

LH: Coral reefs are primarily seen as these beautiful ecosystems full of colours in shallow areas. But here we confirm other recent reports that said that corals can adapt and thrive in deeper parts of the ocean. This clearly highlights that we have ignored an important part of coral reefs for decades. The main reason for this is that it’s difficult to reach these reefs. The deeper you dive, the more difficult it becomes. This is why we don’t know much about reefs below 30m. Nonetheless, with the use of new rebreather diving technology, we believe that we will discover more areas like the one found off Tahiti in the future.

AR: Until now, we know very few things about these depths. By being able to explore them thanks to new diving techniques and new diving technology, we have the chance to discover wonderful ecosystems, while learning more from them.

That’s why we do believe that depth protected these reefs from the last bleaching events in the area.