3,700 miles from Spain to Antigua in 70 days, 3 hours and 48 minutes: 21-year-old Jasmine Harrison made history when she became the youngest woman to row solo across the Atlantic Ocean.

Sitting all alone on your life raft on the deck of your 21-foot-long rowing boat in the middle of the Atlantic Ocean at night, while looking up at the stars makes you feel so small and alone. It is a feeling that is hard to recreate; the feeling of knowing that this is the time and place where you’re meant to be. Nothing matters because there is clearly so much more out there.

This was exactly the feeling that I have been dreaming of without knowing it since that January day in 2018 when I found out that rowing across the Atlantic is something that is possible and something that I myself could actually do. The idea of escaping, experiencing freedom and pure adventure hooked me immediately when I looked out at the waves from Nelsons Dockyard in Antigua. I knew that one day I would be back here. But I would arrive in a much different way. 18-year-old me knew what I wanted, and I could feel what path to take even though I couldn’t see it yet.

Taking on such a challenge is by no means an easy feat though. I understood the hard work that needed to be endured but this part made the entire experience even more inviting, rather than deterring me. I had to prepare, learn and persevere for two years just to get to the start line in La Gomera on the Canary Islands. Searching for sponsorship, asking for support, doing training took over my life.

The idea of escaping, experiencing freedom and pure adventure hooked me.

On 12 December 2020, me and my boat Argo set off to cross the Atlantic. Everything had built up to this moment. The countless hours of dedication, tears and frustration all blew away in the wind as we left San Sebastian at 10am that Saturday morning. I was exhausted already and got hallucinations from sea sickness patches. All I wanted was sleep. Surely, I can’t need sleep on the first day of the trip, I was wondering. This was a glimpse into what the remaining 70 days would feel like: exhausting.

Gripping a rowing oar in each hand, I felt the callus against the wood handle. As the days went by and another stroke was taken, I thought that each stroke was one closer to the finish line. But the gods of the sea had a different idea for me as the winds changed only two weeks into the challenge. The winds wanted to take me north, then south and then east. Any other direction than the one I wanted. I spent days and hours learning who I truly was when I sat there, battling the pure strength of mother nature. I learned how resilient I could be.

Then another wave knocks you off your seat, another wave soaks you to your skin, another wave comes into the cabin and soaks the bed, creating an even more sleepless night than the previous one. Some would say this reminds them of torture, but I was there to push myself. I wanted to learn and see what was possible for me. I put myself in that situation so I couldn’t complain. Right from the start I knew it was never going to be easy. And, although at the time it doesn’t feel like it, you know it’s not going to last forever. 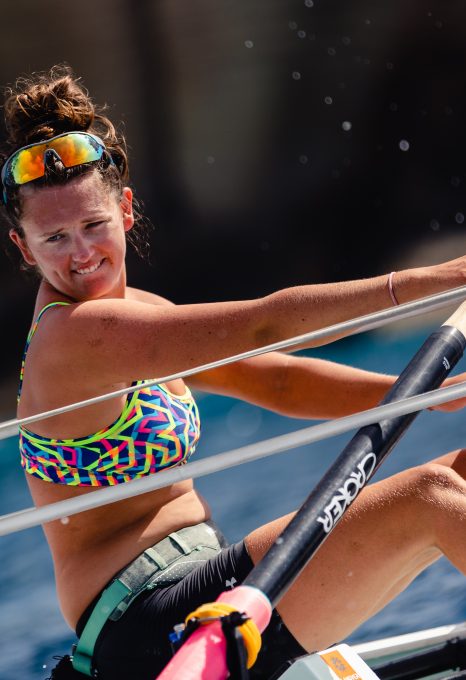 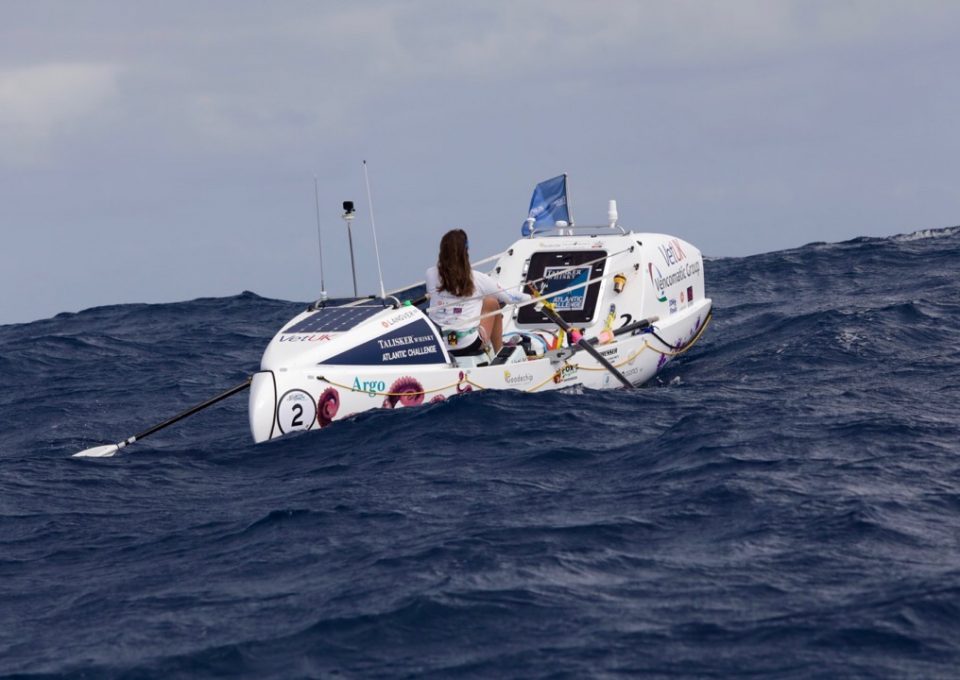 The beauty of the ocean, however, ended up making me want it to last forever. Hearing the unmistakable puff of air from a whale or dolphin so close to your boat created an unbelievable excitement and magical feeling. What a magnificent moment to embrace. I swam in the ocean to clean the hull of the boat when a pod of around 40 dolphins joined me. All around me. I looked behind me and there they were.

Their air bubbles rose around me and I heard the squeaks and clicks clearly. It made me feel at one with nature. It seemed like they trusted me and I was one of them now. They came up so close to me. Inquisitively they read my personality and I read theirs. An exchange was made by looking in each other’s eyes. An exchange that made me feel alive and not alone anymore. I might be a human but I am in their territory and we are all equals here. Looking down into the depths as they swam away, I was wondering where they actually go. Do they have a home, like me? Or do they travel the entire world never really knowing where they are?

I swam in the ocean to clean the hull of the boat when a pod of around 40 dolphins joined me.

At home, my dogs were waiting. I had left them to go on this voyage. As much as I missed them, I knew I needed to keep rowing. After all, that was the fastest way to see them again. Checking regularly with my mum over satellite phone, I made sure they were okay. Living at sea is a simple way of life, particularly on such a small vessel, with only one destination in mind. Trying to eat ration packs instead of my normal diet was difficult. I hardly ate any proper food, shovelling chocolate bar after chocolate bar down my throat. I told myself that I should probably save them as the uncertainty of when you would hit land was very real throughout the entire journey.

Some people make it in 28 days, others in over 100, and very sadly, a few never make it. I packed for 85 days but hoped that it would be less. The bad winds, however, made it feel like it would be 2030 by the time I arrived in Antigua. At some point, the bad weather calmed down and I was left with beautiful, flat, calm seas. It looked like a mirror that spread all around you. You couldn’t make out where the sky began, and the sea ended. Every drop of water that fell off my oar made its own little whirlpool, drawing the attention of numerous fish beneath. Dorado, tunas, pilot fish, a sunfish and flying fish all visited me on my crossing. The highlight was seeing a striped marlin zoom past my rowing boat with its dorsal fin high above the water. Breaking the boredom and stimulating the brain for longer than it should, everything was fascinating. Such a big ocean, such a tiny boat! I felt so lucky.

Living at sea is a simple way of life. 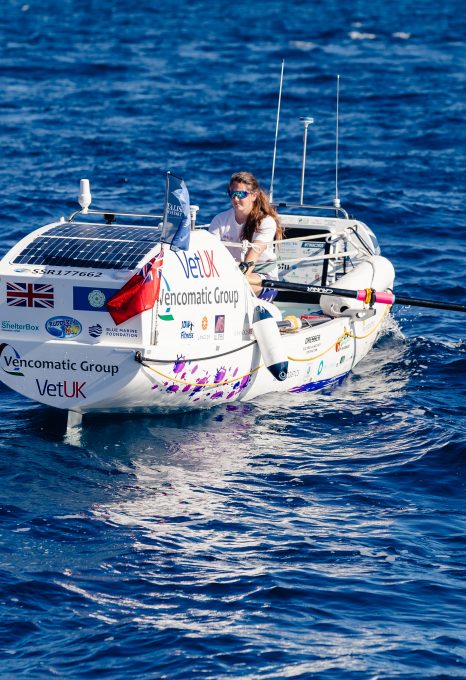 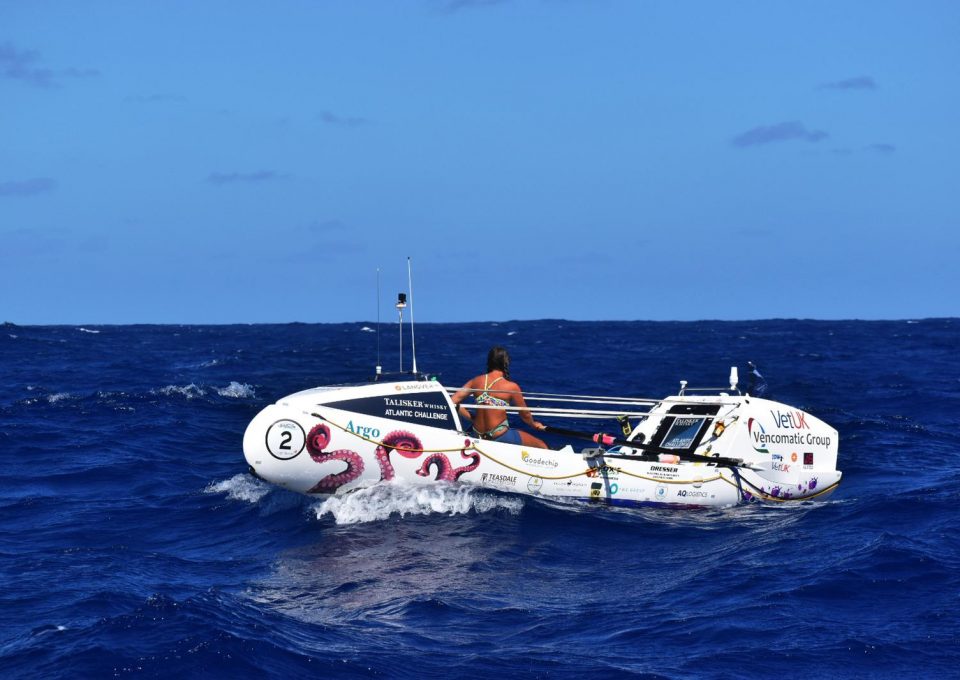 One day in the middle of January, my AIS alarm went off at 3am, making a sound I had never heard before. There was a large 800ft drilling ship heading my way. It was right behind me, about to squash me and my boat. My tiredness was gone immediately and I jumped into action. I attempted to radio in and get the attention of the big ship’s helmsman. It was to no avail sol I steered, rowed frantically and hoped I could get clear of the boat to avoid contact as that could have been catastrophic for me.

Grabbing the signalling flares I had on my boat, I decided to try the radio one last time to get the attention of the ship called Stena Forth. Luckily this time they heard me and changed course. I was able to relax but reflected on what just happened. It was a very close call and I wanted to prevent it from happening again. When I didn’t row, I travelled at about 1 knot, while the ship travelled at around 10 knots. I did the maths in my head: I was woken up by the ship when it was only 2 miles away. This meant that I had very little time to react; it was an event I didn’t want repeated. I hoped that this would be my last bad encounter as I got closer to Antigua. I already got thrown overboard by a big wave which made me lose my speaker overboard, while also breaking almost every charging cable of my phones. And my phones had my navigation on it…

When I had only 40 miles left to go until the finish line, I already tasted that fresh food in my mouth. I only had 48 hours to go and for the last time, I was sleeping in my cabin. I was ready for the next full day, another night and another quick morning row. But suddenly, I heard the loudest noise that sounded like water rushing towards my boat. After spending 68 days on the water already, I knew that this sound wasn’t a good one. The wave hit the side of my boat, throwing me across to the other side of the cabin. I kept thinking: “I’m going over.” Argo got taken by the wave, spun around and I hit the ceiling.

I was shaken. I clutched my elbow that had been hit and checked my back. I had landed on all of my stuff which included a deck knife. Yet another reminder that I should keep my cabin tidy – even one day before reaching the finish line. I rushed up to check that Argo was okay and that everything was still on deck. Luckily, I had tied down the oars and life raft. My flagpole, on the other hand, had taken a battering and was completely bent. As far as it goes, however, the damage was minimal. I told myself: “Focus now and row to Antigua, to land, to food, to water that is not made from the sea, to friends and to a proper bed, a bed that isn’t borrowed from your dog…”

The wave hit the side of my boat, throwing me across to the other side of the cabin. 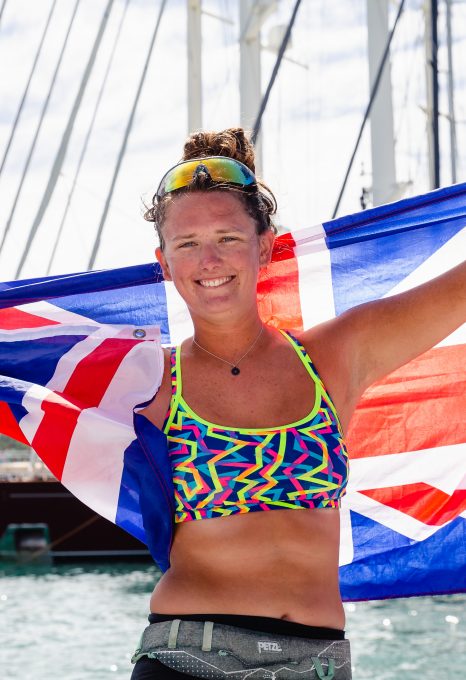 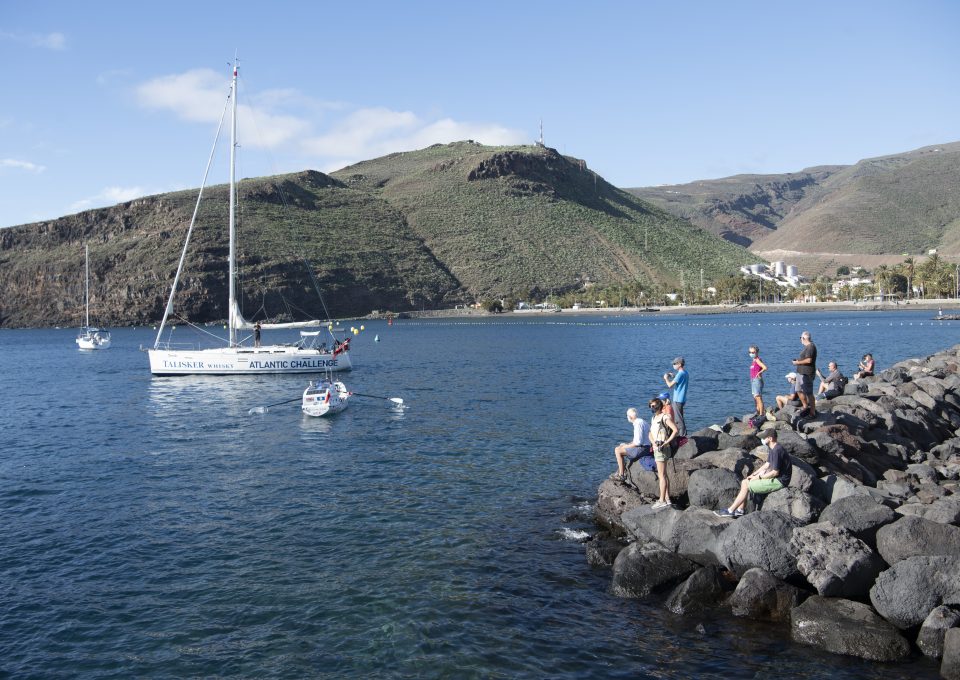 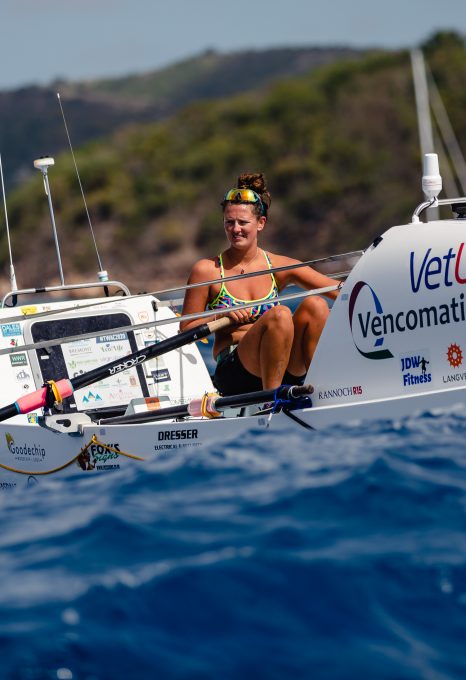 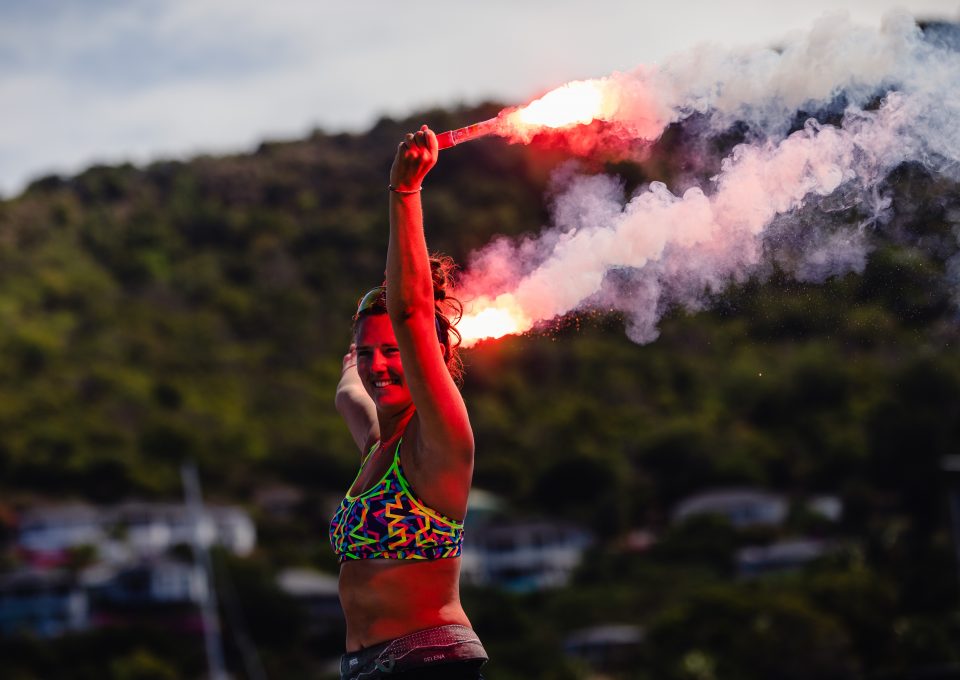 When 20 February came, I finally rowed into Antigua’s harbour. With several cameras pointing in my direction, flares burning and several media outlets waiting for me to arrive, I felt happy and accomplished. I had just gotten a world record for the youngest ever solo female to row any ocean. A pretty cool title, I thought, as I tucked into my well-deserved burger. In that moment, just like when I was at sea on my life raft staring at the stars, I realised that nothing matters. But yet, everything does.

One of the special wildlife encounters Jasmine had in Argo: