Sharks are in deep water.

Every day more than 250,000 sharks are killed. Remove sharks from the ocean ecosystem and we see a domino effect, catastrophic waves through the web of life. Ecologists call this a trophic cascade. At the top of the food chain, sharks are the cement of ocean ecosystems. Without them, the life aquatic crumbles, robbing millions who eat from the sea of both their livelihood and primary source of protein.

When thinking about sharks in danger what images come to mind? Generally, it’s gut-punching shots of finned sharks breathing their last on the ocean floor, unscrupulous knife-wielding fishermen or bowls of nefarious shark-fin soup bubbling in Asian countries far, far away. That was my mental picture at the start of this journey.

Between 2000 and 2008 the net combined shark tonnage reported by four EU member states was higher than the world’s number one shark fishing country, Indonesia. Indonesia confessed to 13.3% of the global total. Add together Spain, Portugal, France and the UK, and you get 13.4%. Spain came in at number three on the worst offenders list. For me, that was a pretty insightful bit of maths for a problem I thought happened on another continent. It felt like a story waiting to be told. Between 2000 and 2008 four EU nations were hauling in an average annual catch of 110,463 tonnes of sharks. In 2009 the combined total catch of sharks and rays for all EU states was 112,329 tonnes.

There’s a global shark extinction crisis and it’s closer to home than you’d ever imagine possible.

These figures certainly illuminate Europe’s compliance in exterminating sharks, but they are also at least ten years old, and a lot has changed in a short space of time. In 2003 legislation saw a dramatic shift for sharks in EU waters and sharks caught by EU vessels internationally. This was strengthened in 2013. To outlaw the cruelty of finning at sea, it was decreed sharks must be landed with their fins naturally attached. Outside Europe, other nations were tackling the finning problem in other ways – you could carry out finning at sea, but all sharks were to be retained, and your carcass to fin ratio could be checked. Today the majority of the world’s oceans are covered by some form of finning regulation.

The buzzword is retention. Retaining the whole shark is a practical way to limit total shark catch, some say. This thread of logic says: ‘better your frozen hold is full of sharks than full of shark fins’. Yet now, there’s a new problem. By retaining and landing sharks, it’s no surprise we’re eating more shark meat too. The UN’s Food and Agriculture Organisation’s official figure of 121,641 tonnes of sharks, rays and chimaeras imported globally in 2011 represented an increase of 42% by volume compared with 2000.

So, when thinking about the shark extinction crisis, it’s important to not focus solely on the finning of sharks at sea and their being tossed overboard. It was a problem, but we’ve largely moved on from there. Now we have a shark meat problem and the trade in shark fins hasn’t disappeared; the fins are just removed from dead sharks on land.

When I think about shark finning now, the brutal image of fishermen finning sharks on the high seas has been replaced by workers in sterile cold units in Vigo, Spain. Their job is to process fins from sharks that arrive with their fins naturally attached. As of the time of writing, the species processed include shortfin mako, a shark listed on the IUCN Red List as ‘Endangered’ globally and ‘Critically Endangered’ in the Mediterranean. Nevertheless they are legally caught without limits, their fins exported to China. The President of a company in Vigo – which specialises in processing both “fresh and frozen large fish and shark fins” – is on record explaining that they export around 50,000kg of shark fin a month, for around €10 per kilo. 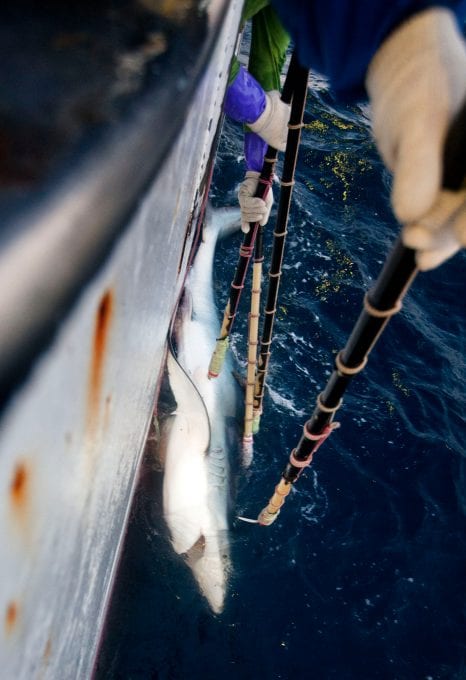 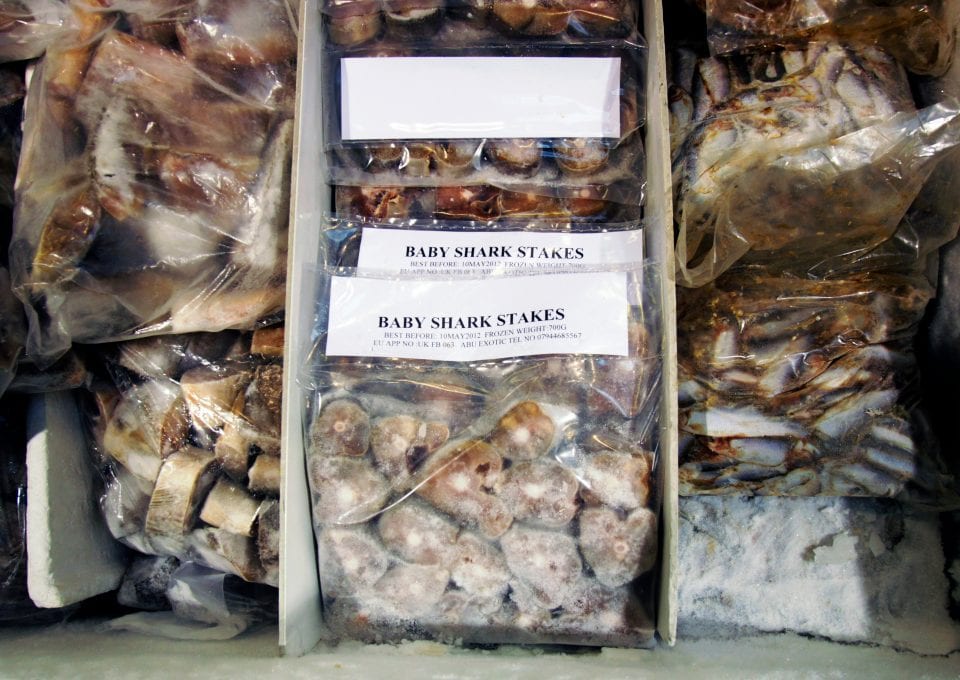 These are long-lived animals.

The UK is also importing shark from tropical shores. In 2019, shark conservation charity Biteback and the Marine Conservation Society exposed a photograph of scalloped hammerhead pups for sale at Billingsgate Fish Market. The scalloped hammerhead shark is listed as CITES Appendix II (the Convention In Trade of Endangered Species), which made that import illegal. In the same photo there was a tropical shark with its fin removed. That, as it transpires, is legal. There’s shark meat for sale there too: ten minutes from the financial district of London’s Canary Wharf you can buy a Brazilian sharp-nosed shark steak, which are so understudied the IUCN Red List have declared them ‘Data Deficient’.

Tell the Truth. In conservation circles those three words are quickly becoming a mantra for our times and my documentary Sharks: In Deep Water has the truth at its heart. It unpacks a jaw-dropping reality. Bold and decisive Europe-led change could save swathes of sharks and dramatically reduce Asian shark-fin consumption.

Filming undercover is hard. It’s exhausting. Bearing witness to the dark underbelly of the sixth mass extinction is, from an emotional point of view, torturous. Yet, as a wildlife filmmaker I feel we need to tell these stories, to tell them well, to tell them truthfully and to tell them in a compelling way that draws the audience in and spits it out an hour and ten minutes later feeling inspired, uplifted and fired up to play a part.

The oddest undercover experience I’ve had was documenting the trade in sharks in UK fish and chip shops. It’s just utterly distasteful to document ocean extinction on one’s own doorstep. Shark isn’t being sold as cod or haddock as some media outlets have incorrectly stated. Instead, any one of 47 species of shark can be sold under any of the following names – dogfish, rock eel, rock salmon, huss, flake or rigg. Unsurprisingly, consumers and buyers are confused by these names, set in stone by the UK’s Department of Environment, Food and Rural Affairs (DEFRA) in 2013.

One shark dominates the fish and chip shop menu. Our results now form part of a University of Exeter statistic: 86% of 94 samples to date are spiny dogfish. In the northeastern Atlantic it’s ‘Critically Endangered’ – just one assessment category away from being extinct – and we can’t fish them intentionally. Globally, spiny dogfish is ‘Vulnerable’. The Marine Conservation Society list spiny dogfish as a ‘fish to avoid’. These are long-lived animals. Females don’t breed until they’re 12 years old and they have one of the longest gestation periods of any vertebrate; up to two years to finally birth some six pups. The estimated generation length is 25-40 years. At certain times populations aggregate, so fishing them then would be especially damaging. All that said, the Marine Stewardship Council certify a sustainable US fishery on the other side of the Atlantic, and it is highly probable our chippy sharks are coming from there. It is down to consumers to decide whether they want to eat these sharks. Sharks: In Deep Water will request DEFRA change the names these sharks are sold under. At the point of sale people should be aware they are buying shark – not a type of salmon or eel.

It was a great white shark that started this journey – the ocean’s most awesome predator. I saw footage of it dead and for sale in Morocco. So I decided to head out with a team of filmmakers, shark geneticists and campaigners to document these scenes. Our work could have ended there, an alarmist film about somewhere far away from the UK. But the more we saw, the more we investigated, the more we realised that this wasn’t just a Moroccan problem. There’s a global shark extinction crisis and it’s closer to home than you’d ever imagine possible.

Since the time of writing the EU and US voted against conservation regulations for catching Shortfin Mako in the North East Atlantic. China and Japan were in favour of conservation. However, Shortfin Mako has also been added to CITES Appendix II, which should close down EU’s export trade to China unless the country of export can show continued business is sustainable. That would be a near impossible claim to make.

Matt Brierley’s conservation feature film, which is actively looking for sponsors, Sharks: In Deep Water will be available in 2020, and looks to reveal the truth behind the global shark extinction. If you’d like to be the change and support the film contact the team via Twitter or Facebook.

Please note that the images used to accompany this piece are not from Matt’s collection. Photographs courtesy of: Hannes Klostermann, Rick Miskiv and Andy Casagrande via The Ocean Agency‘s Coral Reef Image Bank, and of Francisco Rivotti, Paul Hilton and Kajsa Sjölander via Greenpeace.

These are long-lived animals.