The waters around Palau might be tranquil now, but this hasn’t always been the case.

Looking out over sapphire waves flecked with the teal atolls and glittering white sands of the Caroline Islands, it’s hard to imagine that the Pacific paradise below witnessed some of the most intense combat during World War II. 75 years ago, American and Japanese forces were engaged in brutal combat on the seas and in the Micronesian jungles during the Mariana and Palau Islands campaign. Today a few corroding military structures act as a reminder of those struggles to the new wave of visitors to these waters.

Every year, tens of thousands of divers descend upon Palau’s capital of Korror for the chance to experience some of the world’s best-preserved reef systems. It’s one of the most biodiverse reefs I’ve ever had the pleasure of diving. In 2009, Palau created the world’s first official shark sanctuary, banning all commercial shark fishing within its exclusive economic zone. It now boasts a Marine Protected Area (MPA) the size of France and as a result, it has become a mecca for divers and marine biologists.

Our team headed to Palau to film a sequel for Discovery Channel’s Shark Week. Last year, Paul de Gelder and I spent two days floating in Atlantic around the Bahamas MPA for a show called Sharkwrecked. Our mission was to dispel the myth that shipwreck survivors should fear sharks – it is the sharks that have the most to fear from humans. Having vowed never to spend such a long period of time in the water again, Discovery successfully goaded us back beneath the waves with a trip to Palau.

Palau is one of the remaining safe havens for sharks, due to the strong environmental commitments made when it became an independent nation in 1994. Enshrined in its constitution is the requirement for ‘conservation of a beautiful, healthful, and resourceful natural environment.’ This foresight has served the country well, its waters earning a reputation of being one of the seven underwater wonders of the world. Palau’s marine ecosystems have remarkable biodiversity ranging from pristine coral gardens to large aggregations of manta rays, dolphins, reef and silky sharks and tiger sharks.

It now boasts a Marine Protected Area the size of France and as a result, it has become a mecca for divers and marine biologists. 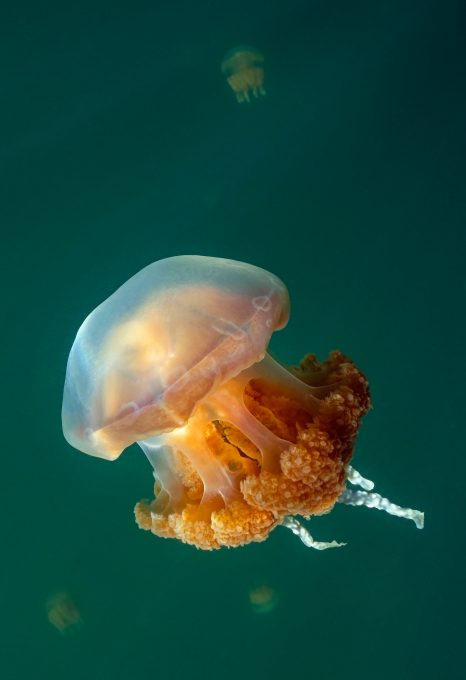 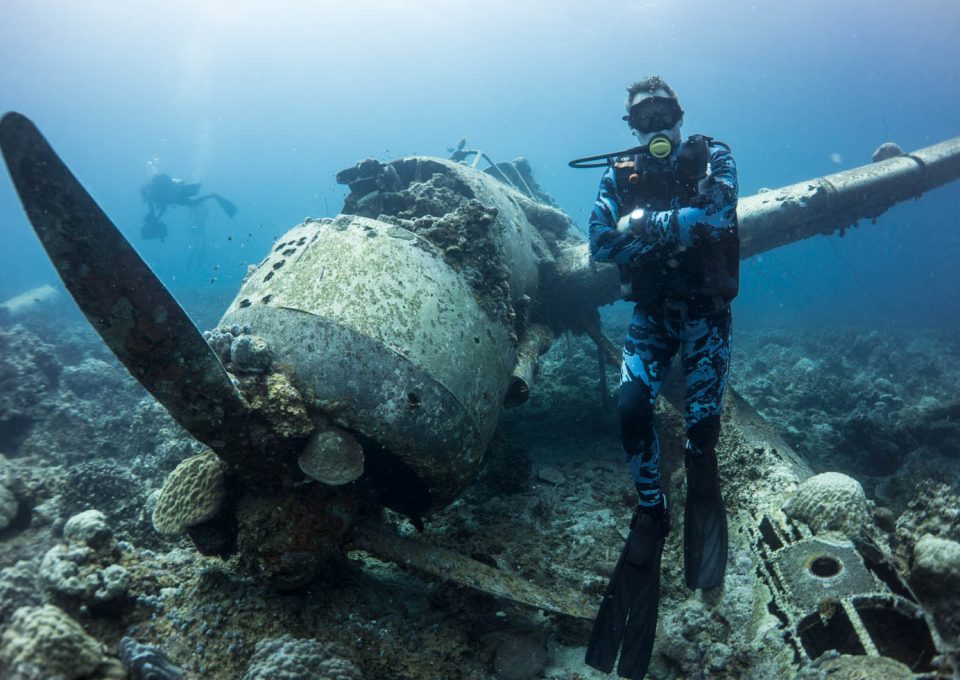 For this year’s Shark Week, we attempted to comprehend the experiences of the World War II pilots shot down in the Pacific and how they survived at sea. President George Bush Senior was among the many airman whose fighter plane crash landed in the ocean. Some ended up floating towards the islands, where horrific fates awaited those who found themselves in prisoner of war camps. Others floated out into the Pacific Ocean, adrift in flimsy life rafts, surrounded by sharks. A lucky few were rescued, but not before a harrowing fight for survival at sea after first parachuting into the unknown from their burning aircraft.

To begin replicating elements of these pilots’ experiences, Paul and I skydived from 11,000ft into the Pacific Ocean. On landing in the deep blue, we soon found a large silky shark circling us, attempting to work out what we were. Back in the 1940s, airmen stranded at sea reported being followed for days by a variety of sharks.

We spent our first night in the Pacific in a small raft, which according to the instructions is designed for four survivors. Despite this, just the two of us completely filled the raft. Rough seas made it thoroughly unpleasant to be sat in a flat-bottomed raft, and sea sickness quickly set in. By the following morning, after each being kicked in the face on multiple occasions as we jostled for sleeping positions, we both agreed it probably wasn’t a great idea to be repeating the experiment. However, it was the reappearance of silky sharks that made it worth it. Tragically, even in an MPA, the numbers of sharks across the Pacific has been severely reduced as a consequence of commercial fishing.

Silkies are a tropical migratory species found worldwide in coastal seas and open oceans, growing up to 10ft in length. Tagging studies have recorded lengthy migrations of more than 1,300 miles. Their preference for pelagic fish such as tuna has made them highly susceptible as by-catch to commercial fishing, particularly by longline and purse seine fishing practices. Silkies are particularly vulnerable to overfishing due to their slow growth, late maturity for breeding and small litters. Silkies are also targeted for their fins, used in shark fin soup and for their meat. Silkies are classified as near threatened on the IUCN Red List, however the situation is likely to be worse. Accurate data on their population decline is limited, however the Western & Central Pacific Fisheries Commission (WCPFC) and the Inter-American Tropical Tuna Commission have been able to document steep declines in their abundance.

We spent the morning with six young silkies, ranging from 4-6ft long. They are a pleasure to swim and free dive alongside. Initially very cautious, after time they eventually ventured closer to us, to within a distance for their electro-sensory systems to satisfy their curiosity. Their skin is smooth compared to other sharks and their nature is less boisterous compared to Oceanic whitetips. At no point were these sharks at all threatening. Like so many other shark species, they investigate everything unusual and once they realise we’re not part of their diet, they disappear into the deep blue.

Like so many other shark species, they investigate everything unusual and once they realise we’re not part of their diet, they disappear into the deep blue. 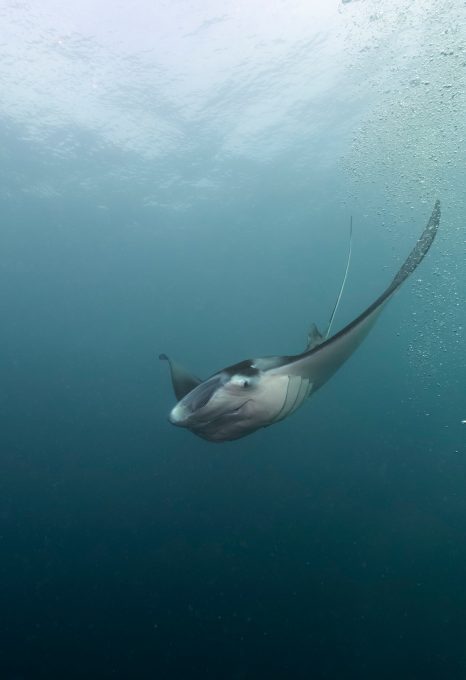 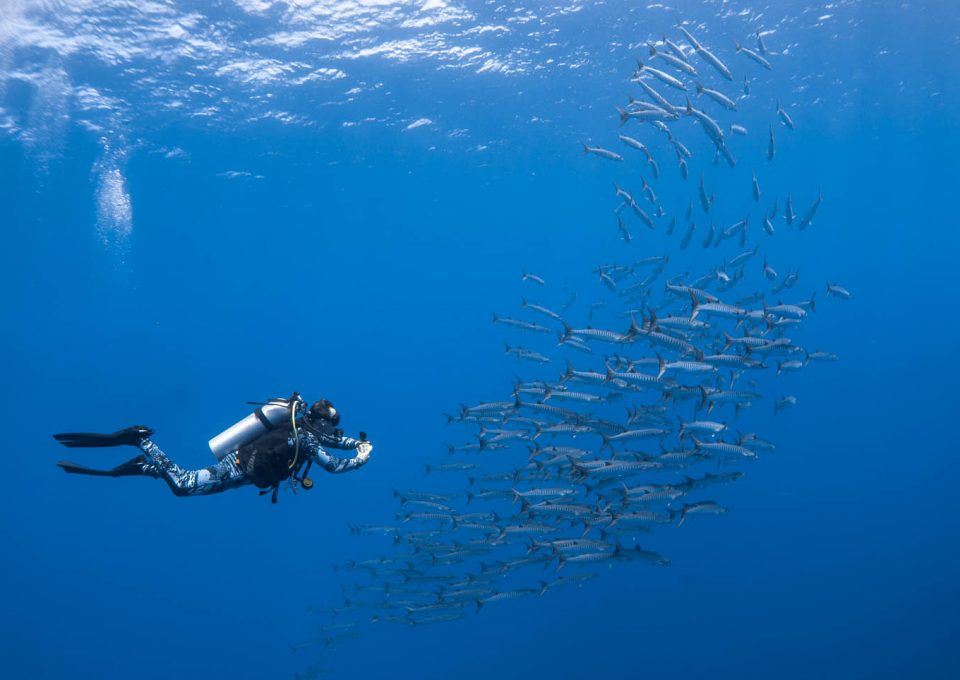 we concluded that sun exposure and exhaustion are far greater threats than the passing marine life.

Just over 24 hours into the experiment we faced a new challenge – our second night would be spent without the life raft. In its place the film crew provided a flimsy aluminium frame, wrapped in nets. Whilst it may sound worse to be in the water instead of a raft, with a water temperature of 28°C and 5mm wetsuit, it’s actually more less nauseating to be in the water than rolling around on top of it. That said, a second night at sea was no fun and all sense of humour quickly dissipated by the early hours of the morning. It’s almost impossible to sleep wearing a life vest whilst been hit over the face continuously by waves. It’s this exposure to the elements that causes exhaustion to set in. The darkness becomes disorientating and apart from the occasional silky shark, the night was long and uneventful. I found myself wondering what life sailors and airman who found themselves in a fight for survival at sea would have experienced 75 years ago. It wasn’t until sunrise, when we had drifted within a mile of a small island, that the marine life became more abundant.

Once we had sight of land, Paul and I waited until we drifted as close as possible before making a concerted effort to swim across the island’s outer reef. Currents rip between Palau’s islands, meaning that it is easy to swim in vain and be pulled back out to sea. We had just under a mile to swim from our makeshift safety frame to land. Ordinarily this wouldn’t be a challenge for two former naval frogmen, but after 48 hours at sea without food and water, every stroke was an effort and the wetsuits began to chafe – badly.

The final push into shore took us across a spectacular reef wall that dropped off into the deeper ocean. It’s these reef walls that has made Palau famous for the cross section of large shoals of pelagic and reef fish. It did not disappoint, with large shivers of reef sharks, tuna, turtles, and schools of parrot and trigger fish. Leisurely swimming and snorkelling over the last few hundred metres over healthy reefs, rich in biodiversity made up for the overnight experience.

After two separate experiments for Discovery Channel, with two days adrift in the Atlantic and two days in the Pacific Ocean, we concluded that sun exposure and exhaustion are far greater threats than the passing marine life. The deep oceans are blue deserts, only with the occasional flourish caused by shoals of fish.

MPAs cover just 7.6% of our oceans, with varying degrees of enforcement. On the high seas in Areas Beyond National Jurisdictions (ABNJ), there is far less protection and destructive commercial fishing occurs with impunity. The IUCN and World Conservation Congress have agreed a target of protecting 30% of each marine ecosystem by 2030. This needs the backing of an international framework to legally protect the high seas from commercial and illegal fishing. Palau is shining example of the benefits of ocean protection both for the local economy and for marine life, but time is running out.

Hero photograph courtesy of Milos Prelevic. The silky sharks featured in this article were photographed in Cuba by Janos Rautonen.

we concluded that sun exposure and exhaustion are far greater threats than the passing marine life.