I’m bobbing along on a boat off the coast of southern California, trying to distract myself from a wobbly seasick feeling in my stomach by scanning the soft ocean ripples for signs of life. Thankfully, I’m easily captivated by the sense of mystery I feel while looking out over the ocean and wondering what lies beneath. And then, like magic, out of the blue, there she is. I feel a jolt in my chest as a massive column of air shoots 20 feet into the sky – the exhale of a giant blue whale.

The fishy smell of the whale’s exhale fills my nostrils, but the thrill of the moment overpowers my sense of smell, and I move towards the scent, leaning against the boat’s railing. I watch the whale’s long, sleek body shimmer in the sunlight as she breaks the surface, passing our boat with graceful ease.

We’ve all heard metaphors that attempt to describe the size of a blue whale – the largest animal that has ever existed. Bigger than dinosaurs. Longer than three school buses. Heavier than 24 elephants. My brain does the mental gymnastics, trying to visualise a row of school buses, but imagining does nothing to prepare me for this in-person encounter. I am elated and humbled to be so close to this ancient, massive species, and to feel the wildness that she exudes. I revel in the opportunity to feel small in her presence, my human-sized worries falling away.

Then, on the horizon, a figure appears. As it grows closer, I realise that it is an enormous cargo ship, hundreds of times larger than this blue whale. It barrels towards us, and my peaceful excitement shifts to alarm. I know that this year has been exceptionally busy for blue whales in this part of the Santa Barbara Channel, and many more whales are likely nearby, feeding on krill in the nutrient-rich waters. I also know that record numbers of fatal ship collisions with whales occurred off the coast of California for the past two years, and that the risk of ship strikes is especially high in this area.

The Santa Barbara Channel, a 70-mile stretch of ocean separating mainland California from the Northern Channel Islands, is one of the most biologically productive ecosystems on Earth, home to towering kelp forests, pods of thousands of dolphins, and large concentrations of endangered whales that come here to feed. At the same time, the channel is a major international shipping route used by thousands of ships going to and from the Ports of Los Angeles and Long Beach, one of the busiest port complexes in the world. This overlap of whales and ships results in a high risk of collisions.

By the time the cargo ship passed us, moving along this ocean highway, it seemed as though the blue whale had moved on and was out of harm’s way. I couldn’t help but wonder what might have happened if the situation had played out differently. Blue whales are an endangered species, and their small population size means that losing even one or two whales can propel them towards extinction. Did the crew on that ship even know that there were whales nearby?

The Santa Barbara Channel is one of the most biologically productive ecosystems on Earth. 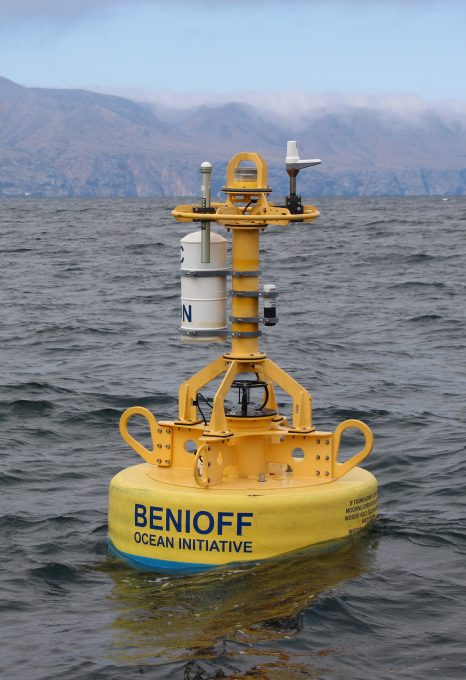 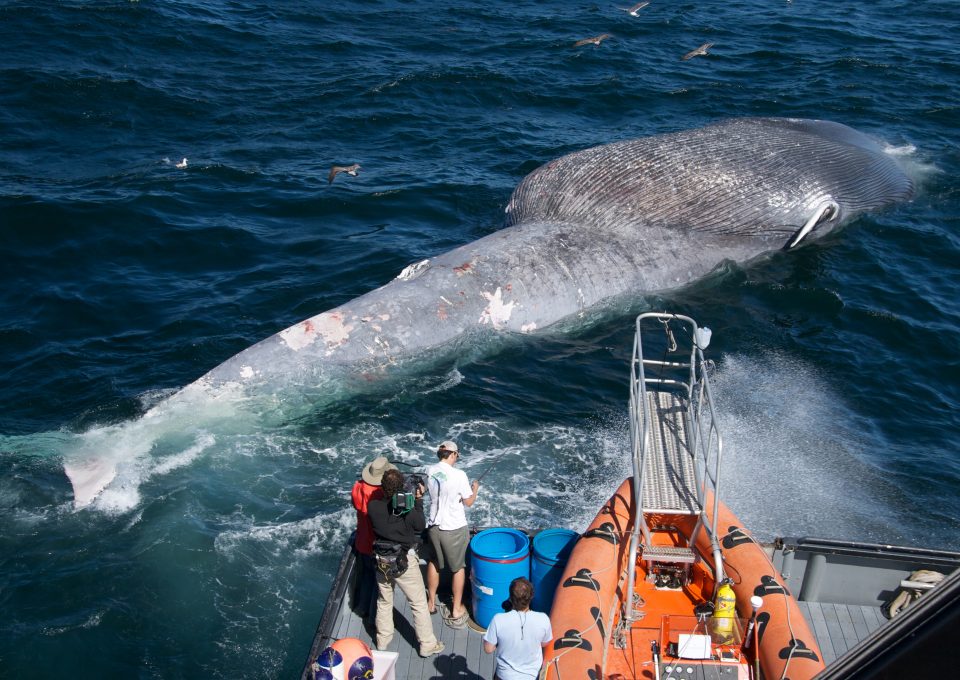 As it turns out, other people were asking similar questions. In 2017 I began working as a marine scientist at the Benioff Ocean Initiative, an applied marine research centre at the University of California Santa Barbara. At that time, we were in the midst of selecting our first ocean issue to tackle, reviewing hundreds of crowdsourced ideas that had been submitted to us from people all over the world. People had been watching dead whales wash up on their shorelines, bruised and with broken bones – signs that they had been hit and killed by ships – and were keen for solutions that would prevent these collisions from happening.

Scientists estimate that more than 80 endangered whales are killed by ships each year just off the west coast of the United States. And the problem is only getting worse as shipping traffic continues to increase. In 2018 and 2019 we saw the worst years on record for ship collisions off the coast of California, and even so, these records likely only confirm a small fraction of ship strike victims, as most whale carcasses immediately sink or are carried offshore.

No one on these ships wants to unintentionally hit and kill a whale. And we all rely on the marine shipping industry as the lifeblood of the global economy. Approximately 90% of our goods travel across the ocean on a ship at some point. How can we protect these endangered species while allowing maritime commerce to continue to thrive?

After reviewing proposals, conducting research, and consulting with experts in the field, our team determined that there were some potentially viable solutions that could benefit from an influx of funding, technology development, and collaboration, which the Benioff Ocean Initiative could help provide.

Research has shown that if ships slow down, it can reduce the risk of fatal ship strikes. However, one of the challenges can be knowing when and where to slow down. A large container ship can be 1,000 ft long and 200 ft high, making it very difficult for captains and crews to spot whales with enough time to respond.

The Benioff Ocean Initiative assembled a team of leading scientists and engineers, and at our first meeting began designing Whale Safe, a technology-based system that would tackle the problem from two angles. First, we would collect, analyse, and communicate near real-time whale data, to help inform the implementation of slow speed zones. Second, we would track ships as they traversed these zones to see if they were actually slowing down.

To accomplish the first task, we decided to integrate three technologies for monitoring whales: an AI-powered underwater sound recording system that detects whale calls; a mobile app used by community scientists to record whale sightings; and big data models that provide near real-time forecasts of whale feeding grounds based on data like ocean temperature and circulation.

A team of bioacousticians, ecologists, and engineers led by Dr. Mark Baumgartner from Woods Hole Oceanographic Institution and Dr. Ana Širović from Texas A&M University at Galveston began developing an acoustic monitoring system, which uses a hydrophone and a small AI-powered computer to detect and identify blue, humpback, and fin whale calls in near real-time. “Their very low pitch, make-your-chest-vibrate, calls travel really well and are an effective means of detecting whale presence,” said Dr. Širović.

Meanwhile, a team of ecological modellers led by Dr. Briana Abrahms from the University of Washington and Dr. Elliott Hazen from UC Santa Cruz and NOAA’s Southwest Fisheries Science Center, worked on building a model that uses real-time oceanographic data like temperature and ocean currents to predict where blue whales are likely to be, like weather forecasting for whales. “The model also helps us plan for new challenges to whale conservation as ocean conditions change,” said Abrahms. “If the ocean does something extreme, like form a heat wave, it is likely to affect where and when whales will show up. The model helps us anticipate these changes, which is important for managers and mariners to be able to respond adaptively.”

Scientists estimate that more than 80 endangered whales are killed by ships each year just off the west coast of the United States. 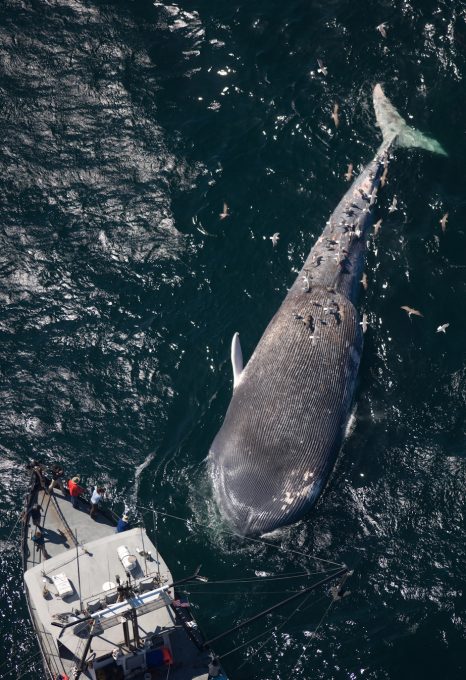 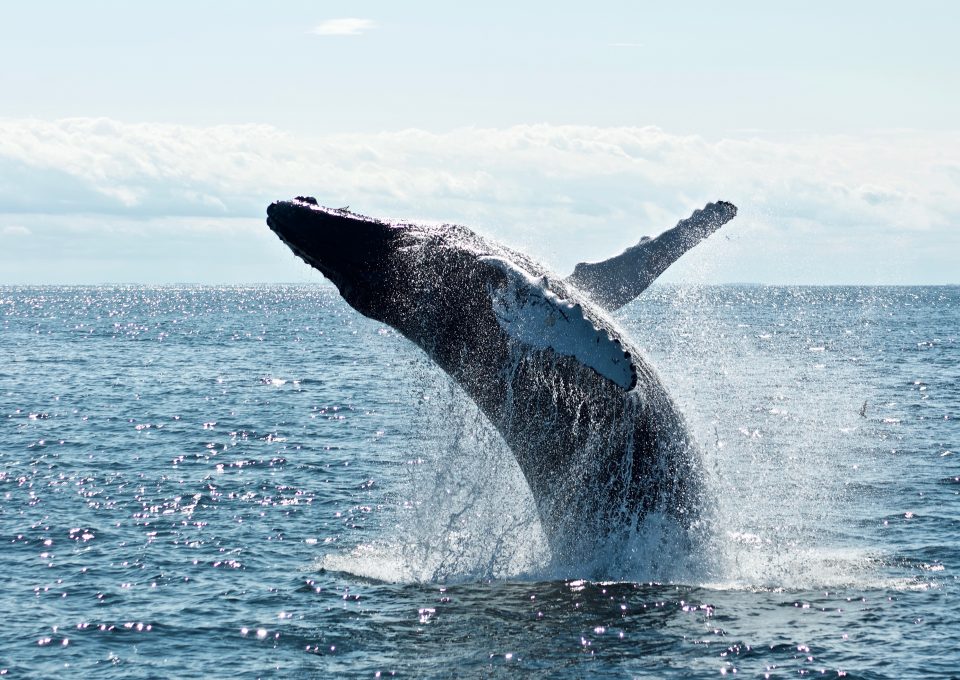 Finally, we pulled in whale sightings collected by community scientists out on whale watching boats. They use the Whale Alert and Spotter Pro mobile apps to collect standardised data that is directly added to an online database.

These layers of information are then combined into a daily Whale Presence Rating on the Whale Safe website – an indicator that describes the likelihood of whale presence from ‘low’ to ‘very high.’ Just like when you drive past a school zone and you see flashing lights letting you know that school just let out and children are likely to be running around, the Whale Presence Rating lets ships know if whales are in the Channel when they’re passing through.

More whale data not only improves mariners’ situational awareness, but it can also help the government know when to implement slow speed zones. Since 2007, when five blue whales were killed by ships in the Channel, the National Oceanic and Atmospheric Administration has implemented seasonal voluntary speed limits, asking large ships to go 10 knots or less. Cooperation with these voluntary zones has been slowly, but steadily, improving over time, and in 2019 about 44% of the shipping industry followed the voluntary speed limit. However, we’d like to see cooperation rates get closer to 100%, and one way we may be able to encourage that is to bring more transparency to which ships and companies are– or aren’t – slowing down.

To accomplish this second component of Whale Safe, we partnered with Global Fishing Watch to analyse hundreds of millions of ship tracking data points in order to monitor ships’ speeds as they traverse NOAA’s vessel speed reduction zones. The data is compiled into report cards summarising each shipping company’s cooperation rate with the speed limits. The clients using these shipping lines, major importers and exporters, many of which are household brand names, could potentially use this information in their sustainability planning, and prioritise working with whale-safe shipping companies. Just as we have Dolphin Safe Tuna, perhaps one day we will be able to purchase Whale Safe products that we know came to us on slow, whale-safe ships.

Earlier in my career, I watched one of these ships slowly chugging along at 10 knots as I flew overhead in a small plane, surveying the Santa Barbara Channel shipping lanes for whales. I was thankful that they were abiding by the speed limit, as we saw record numbers of blue and humpback whales that day, swimming or feeding in pairs or small groups, often right in the middle of this busy ocean highway. The experience was such a contrast and a complement to the visceral feeling of being close enough to a blue whale to smell its breath. Here I got to see whales within the context of their vast ocean home, which they inhabited for millions of years without the threat of being run over by a ship, entangled in fishing gear, or bombarded with sounds of seismic blasting.

We’ve seen first-hand how the combination of these threats has impacted the North Atlantic Right Whale, a critically endangered species with less than 375 whales left. Can we proactively protect other whale species to prevent them from getting to this critical point? Although deploying complex technology in harsh ocean environments and crunching massive amounts of data is no small job, our next step, translating Whale Safe’s data and information into meaningful behaviour change, may be our most challenging task yet.

Nonetheless, I’m optimistic that we’ll pull through and protect these endangered whales not only because they are charismatic creatures with intrinsic value, but because our own fate is entwined with theirs. Whales are ecosystem engineers. They move nutrients throughout the ocean, helping to maintain a healthy ocean and climate, which we all rely upon. My hope is that we’ll remember this and will leverage the incredible technology and tools that we have today to create an ocean where ships and whales can coexist. 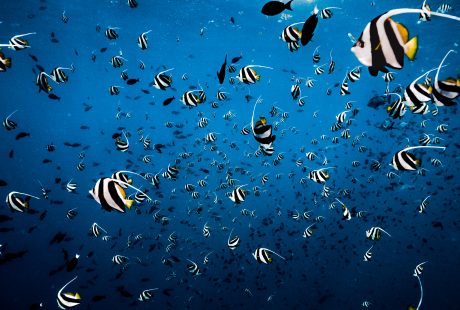 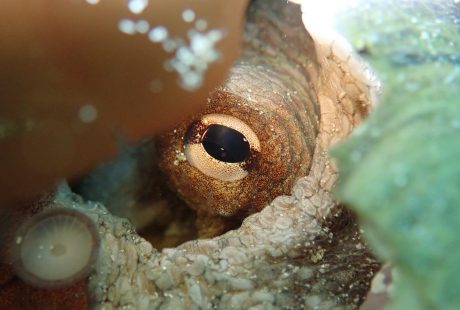