My mother named me after the city of Atlanta. She had no idea how well it would fit me as an adult in my conservation career.

I’ve always felt calm and comfortable around the ocean. As young as three years old, I could spend hours on the beach looking for shells and interesting animals. When I was a teenager, I could usually be found windsurfing or bodyboarding. I later discovered scuba diving and had my first encounters with marine megafauna about a year ago, when I volunteered with the Marine Megafauna Foundation (MMF) in Mozambique.

The conservation field has been a consistent interest for me throughout my life. My studies in environmental engineering and management made me aware of all the threats marine ecosystems are facing, but it was only when I had the opportunity to work with MMF and to see how real and complex these threats were that I finally made my choice of career.

My first encounter with a smalleye stingray was incredible, something I’ll always remember. It was on a weekend dive in August 2018, and I had never experienced such a poor visibility underwater (2-3m maximum and dark green water). Yet, while we were struggling to find our way on the dive site, a smalleye stingray swam past us, gently flapping its pectoral fins. I stopped thinking for a second while my brain identified the brown dinosaur-like ray. I was fascinated. Then everything happened in a flash. After signalling to the dive leader, I kicked to position myself above the ray and photograph the spot pattern, and then swam below it to check the sex. Even though it was swimming relatively slowly, I knew I had to be quick so as not to lose the dive group. In less than ten seconds, the ray was gone. The encounter was so brief and just unbelievable. I wondered whether it had all been a dream.

Despite their size, smalleye stingrays are very elusive animals and thus poorly understood within the scientific and diving communities. Even though they are reportedly distributed throughout the Indo-West Pacific, there have been very few encounters with free swimming individuals in the wild. Tofo Beach in Mozambique is so far the best location to study them in the wild with about 20 rays spotted every year. With so few occasions to see these rays, it takes years, even decades, to collect significant data.

while we were struggling to find our way on the dive site, a smalleye stingray swam past us, gently flapping its pectoral fins. 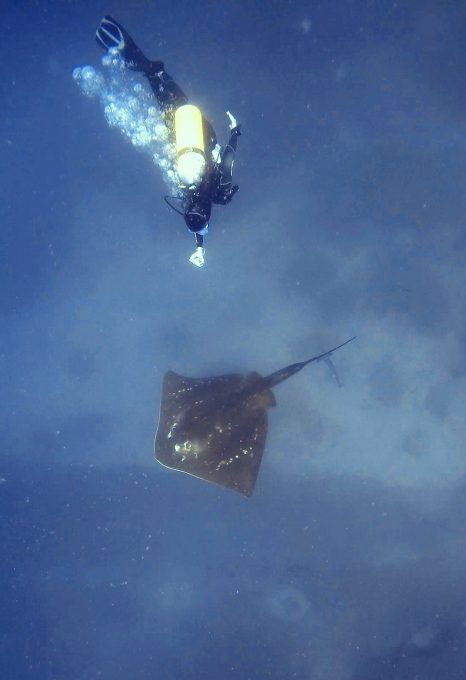 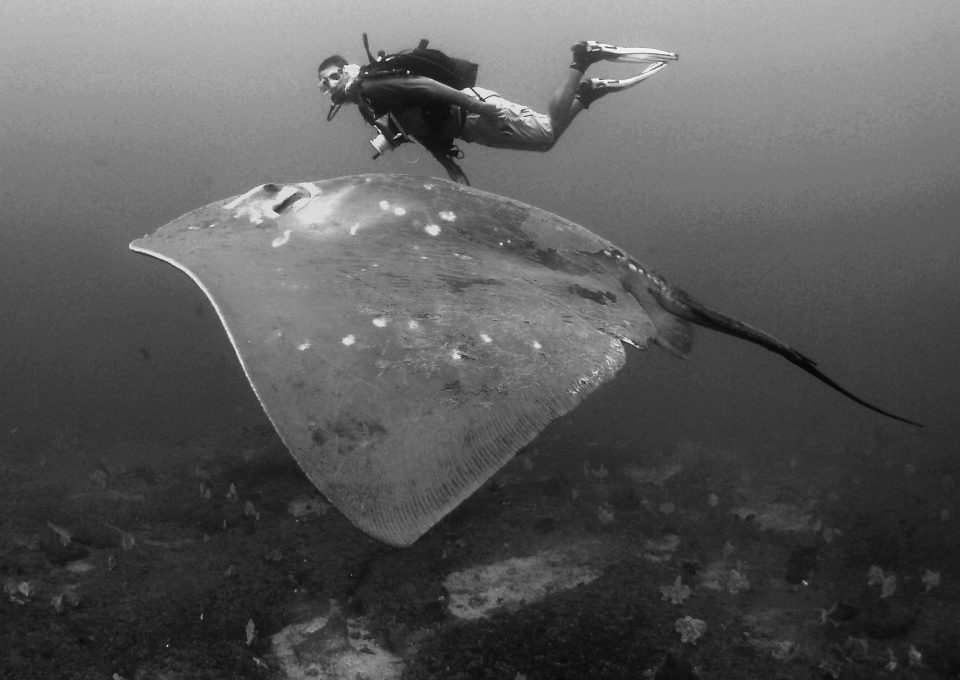 Even though the species is still globally classified as “Data Deficient” on the IUCN Red List of Threatened Species, the smalleye stingrays in Mozambique are likely to be subject to pressures from targeted artisanal fishing and incidental capture in the gill and seine nets used extensively along this coast. The increase of such practices over the last decade has coincided with dramatic declines in other large ray species, like manta rays and devil rays, and could have a significant impact on this seemingly small population of smalleye stingrays. I think they often go unnoticed when compared to more charismatic marine animals such as sharks, turtles or cetaceans. Then when people do finally hear about them, they often first wonder about their long stinger, which can lead to a misconception of this gentle animal.

Last month, we published Spotting the ‘small eyes’: using photo-ID methodology to study a wild population of smalleye stingrays (Megatrygon microps) in southern Mozambique, the first study of its kind. Our research suggests the smalleye stingrays’ natural spot patterns on the top of their bodies are unique and stable enough over time to use for photographic identification. This methodology allowed us to identify 70 rays along the southern Mozambican coastline, using varied habitats and showing migratory behaviours between the different study sites. Generally described as semi-pelagic rays, smalleye stingrays appear to be very different from most other stingrays which are often sedentary.  In their lifestyle, smalleye stingrays are more like the manta rays observed in the region. They use the same cleaning stations and turn out to be highly mobile.

When I started working on smalleye stingrays, the MMF manta ray experts were already looking into using photo-ID methodology for this species. The stingrays’ very distinctive dorsal spot patterns looked similar to the ventral spot patterns of manta rays, and thus was deemed suitable for this non-intrusive methodology.

Every smalleye stingray displays a unique white spot patterns on the top of their body, which we think is stable over its lifetime. When we photograph a smalleye stingray and its spot pattern, we collect a “fingerprint” that can be added to our database and matched with existing images. Other biological and visual information such as the sex and potential scarring is key, too. This allows us to count individuals and estimate the local population. When an individual is re-identified, it can provide very useful information on the animal’s habitat use, if for instance, it is seen several times in the same location.

When we photograph a smalleye stingray and its spot pattern, we collect a “fingerprint” that can be added to our database and matched with existing images. 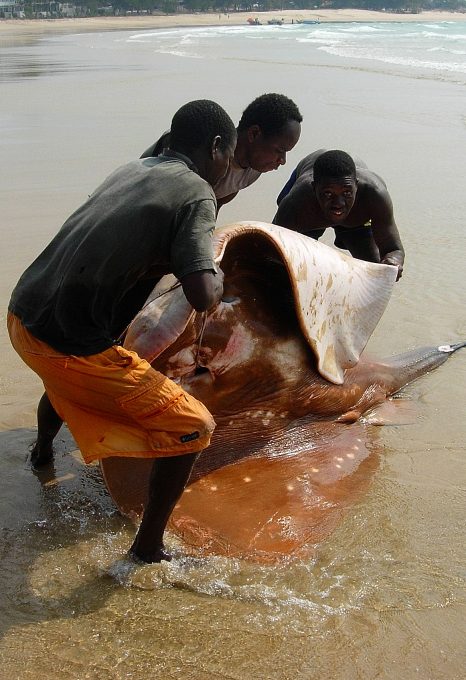 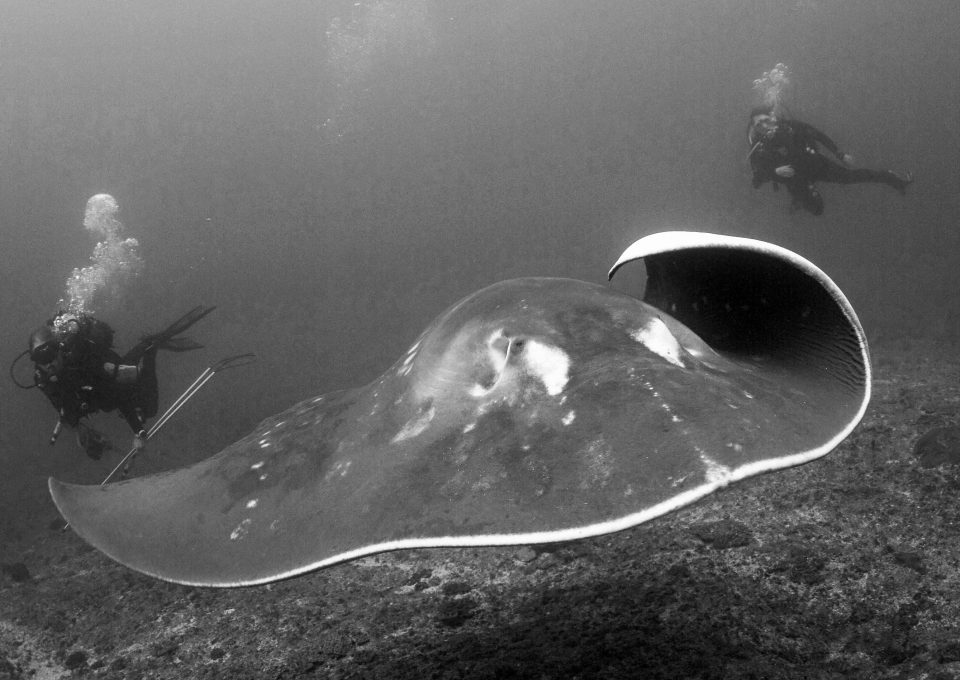 We need to establish their conservation status before it’s too late.

In our study, 15 of the 70 identified smalleye stingrays were re-sighted at least once. The longest period between two photographs taken of the same ray was six years, and the spot patterns remained unchanged. Further investigation is still required to validate the use of photo-ID on a longer-term basis, but these results are very promising for future studies on smalleye stingrays. During this study, we recorded the longest ever travel distance of a Dasyatidae ray – 400 km! This female, who looked pregnant at first sight, travelled 200km to the Bazaruto Archipelago National Park (BANP), and then 200km back to Tofo Beach where she no longer seemed to be pregnant. We had no idea smalleye stingrays could be so mobile along the coastline, and it made us wonder whether there could be a potential pupping ground in the BANP.

Research is essential for the smalleye stingray. It’s crucial that we learn as much as we can on extant species, determining which populations/species are at risk and what threats they are facing. So many stingray species are still listed as “Data Deficient” while most of them are probably already endangered because of destructive and unregulated fishing techniques. We need to establish their conservation status before it’s too late. Different conservation strategies can then be formulated and implemented depending on the data available for each stingray species. Marine Protected Areas, for example, can be efficient for sedentary stingray species, but won’t provide enough protection for migratory species like the smalleye stingray.

I’m hopeful that our work will give the research community the necessary momentum to study the smalleye stingray in the long-term, both in Mozambique and across its range. In addition to the using photo-ID methodology, further investigation of the species’ ecology and biology will be needed to gain a better overall understanding of its role in the ecosystem and its conservation status.

We need to establish their conservation status before it’s too late.