A dot in the Atlantic

A dot in the Atlantic

I’m blown away by the ruggedness of Saint Helena.

The landscape looks arid, mountainous and with a partially grey sky only occasionally revealing green peaks in the distance. The climate feels something like the Caribbean, warm and exceptionally humid although windy. The ocean is a richer blue than I have seen anywhere else in the world. I’ve just landed on Saint Helena Island, a dot in the south Atlantic and a place that I have fantasised about exploring for several years. It’s a place that I want to capture from every perspective; atop the waves, beneath them, from the air and chasing landscapes.

Local people have come to watch our plane land – it’s a popular pastime here, I later learn. The island’s airport has been in operation for three years and before its completion one would had needed to arrive and depart by sea, a fabulous sounding journey of at least a week. Only pilots trained for an “unusual landing approach” and “unusual local weather conditions” are qualified to land here.

Jamestown, which is in the north of the island and my base for a week looks out to the ocean from a deep laceration in the surrounding cliffs and feels to me the warmest part of the island. It can be baking hot here yet cool. Sometimes it rains on the south side but not enough rain to sustain decent agriculture – most of the island’s food is imported monthly. Currently, Internet connection on the island is received by satellite only and is expensive to use, so with pleasure I leave my mobile phone in my hotel room for the most part.

On the map I can see plenty of wrecks to visit around the island. I’m looking for the Chilean devil ray, whale sharks and anything else passing by that falls into the megafauna category. Saint Helena is a mere mark on the navigational chart I’m studying over coffee; the nearest continent is around 1600 miles away to the east, and to the west? Eventually one would find South America. This is one of the most remote populated island destinations in the world.

Apart from us few visitors from the air, several sailors stop here to resupply. A sailor I meet at the hotel tells me of her recent rough Atlantic crossing from South Africa, and how she’s here to gain internet access before making off for Brazil; every visitor I meet has an interesting story to tell. I spend an afternoon sailing around the island with a resident French seafarer who gives me a different perspective of the island from further out to sea, amplifying its remote location.

The weather changes frequently over the island – I feel like I experiences three warm seasons in the space of a day. On morning two, as I walk down to catch a boat, the weather shifts from light rain, black cloud then breaking away to bring sun. I am heading out to sea to freedive with whale sharks. These giants patrol a specific spot east of the Saint Helena’s wharf and it’s thought that they come here to breed. This theory is based on the island’s marine biologists collecting records of an almost equal number of both males and females. It’s believed that this is an aggregation seen seldom anywhere else in the world, if at all to date. Tagging and monitoring programs are in progress here, and the whale shark is “one of the islands key species”, according to Rhys Hobbs, the local marine conservation officer with whom I spend some time with while on Saint Helena. His team started the whale shark research alongside Georgia Aquarium around six years ago.

This is one of the most remote populated island destinations in the world. 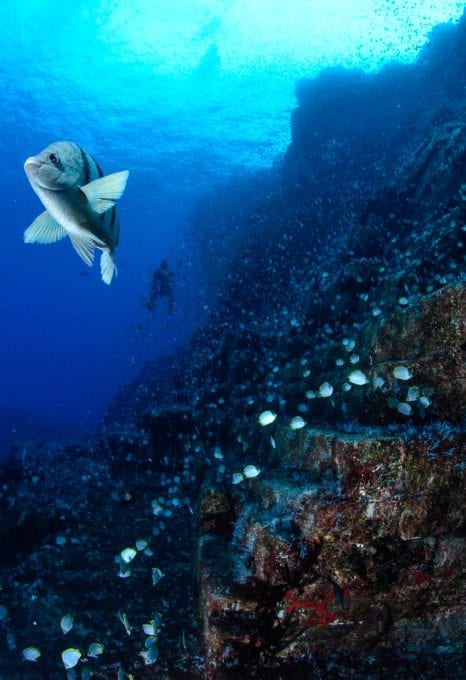 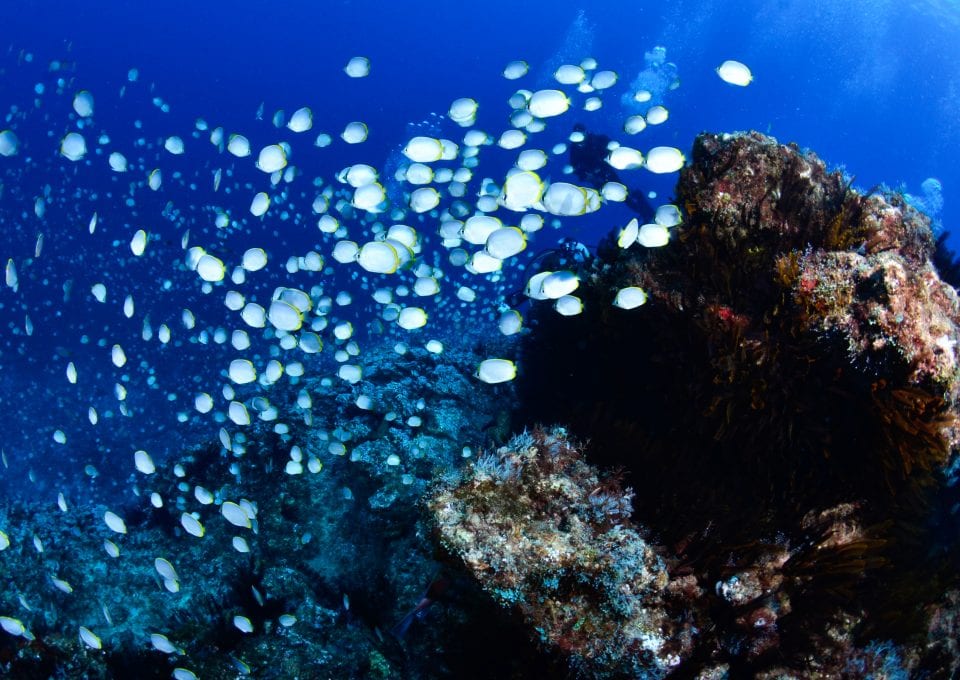 Sea conditions are rough and windy as we past the lea of the island and eventually our we spot an animal close to the surface; a long and wide grey shadow eventually shows a dorsal fin, breaking the surface like a submarine’s periscope. The skipper puts the engine in to neutral and I roll off the boat with my camera. This individual, approximately seven metres long swims toward me for a closer look, which surprises me at first. They have small eyes in comparison to their body mass and I need to continue swimming in order to keep out of its way. Eventually the boat becomes more of an interesting subject for the creature and we part company. The encounter lasts just minutes, but now it is ingrained in my mind.

As well as the shortage of potatoes I hear spoken about quite frequently around the town, there’s also much talk of the fishing issue. Rhys fills me in.

“The fish population is generally very healthy. The fisheries are an artisanal small fleet and only fished using one-by-one methods (rod or hand line, no long-lining) with a landing average of tuna of around 300-350 tonne a year,” he explains. “The main issue around the fishery is the ability to process the fish once it is landed. The current fish processing plant has been run by the UK government for a long period of time but due to its age and overheads it has failed break even/return a profit for a number of years”.

He adds: “Given that Saint Helena relies heavily on UK aid, the UK and Saint Helena Governments have decided that it is no longer the best use of public funds to maintain the processing plant and have attempted to invite investment into the industry”. Apparently, discussions are still going on.

Underwater, I explore caves that hold most of the smaller marine species. Big eyed soldier fish peek out of the dark from an over hanging shelf yet the brave or fool hardy butterfly fish in shoals of perhaps thousands go about their business in the open. My dive guide believes that Chilean devil rays have been seen feeding on the butterfly fish here from time to time and Rhys tells me later that the rays are seen here all year round. The geology underwater here is spectacular; stair-like rock formations that looks manmade stop abruptly where furrowed black and white sand begins. Grey triggerfish swim back and forth along sheer rock faces. The water clarity is insane.

A couple of days into this island adventure and I’m descending on the wreck of the Bedgellet. The boat was a British salvage vessel in its working life, but now sits 16 metres below the surface, upright on the seabed and repurposed as an artificial reef. From the blue, two grey green shapes grow larger as they approach – I am halfway along the dive boat’s anchor rope when the ballet begins. I learn from local divers that Chilean devil rays seen in groups of three or more tend not to hang around for divers, only briefly gliding past, but at this moment I count two and they begin a perfect dance, supported by their remora fish companions. Opportunistic trevally fish join the stage during the final moments of this matinee performance before they turn for a final revolution and fly past in formation over the shipwreck and away into the blue. 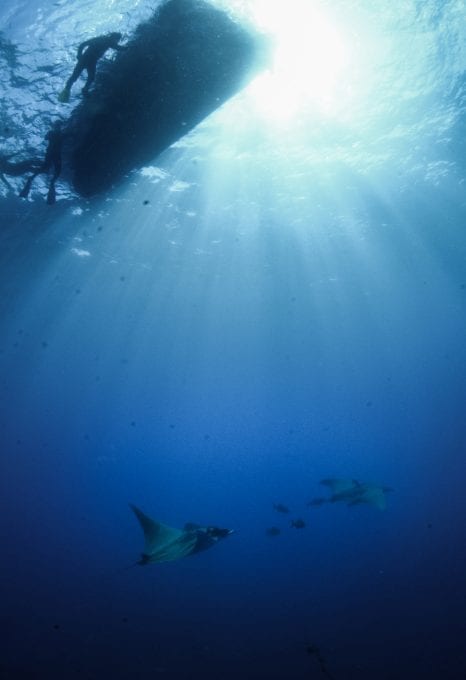 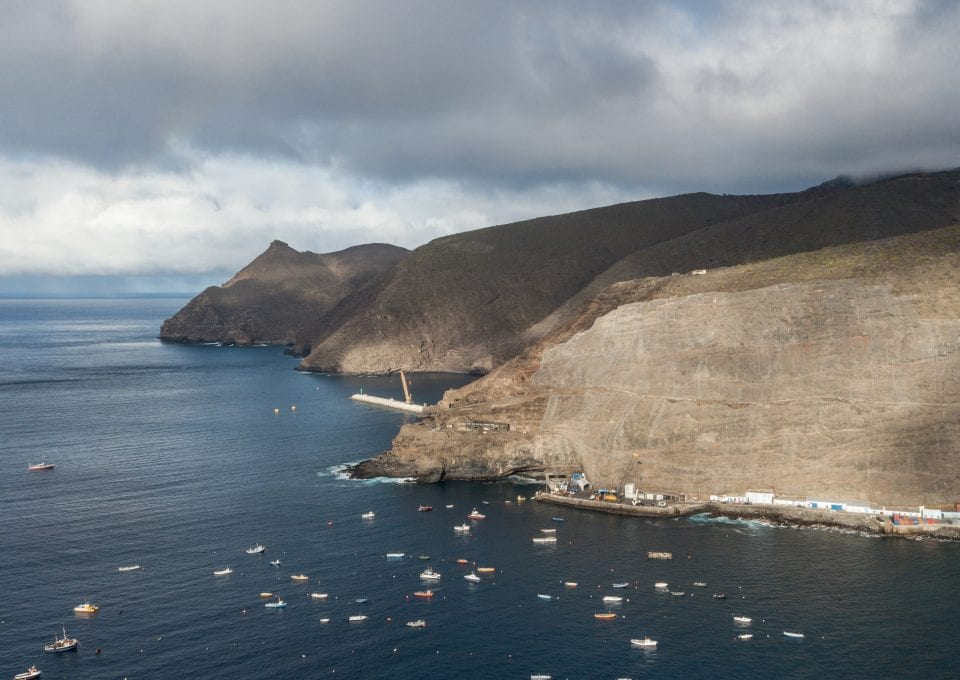 There is something deeply magnetic about this tiny piece of south Atlantic rock.

Between diving and sailing, I walk the island’s trails. Trails that either finish on high vibrant green peaks covered with endemic and invasive plant species or stop abruptly at cliff edges and pinnacles overlooking the ocean. I take a challenging drive down to Sandy Bay, one of the island’s few beaches, wending my way down skinny, wet and steep roads. At the beach, black volcanic sand meets with an tumultuous Atlantic ocean, red crumbling cliffs and steep, deep valleys, the wind too stiff to fly the drone. Walking close to the shoreline, I assume the crunching beneath my feet is the result of broken shells on the sand, but I later I discover that they are all pieces of plastic. There is hardly any discarded litter on the island and so I take a guess that this waste has probably arrived from elsewhere in the world, broken down over time and deposited ashore. It’s a sad scene, especially in a place where such pristine wilderness meets great biodiversity both in the ocean and on land. Once again, for me this confirms our failure to be able to reduce, reuse and recycle this product responsibly and this scene now greets me at every destination I visit – globally.

The wreck of the Darkdale is broken in two resulting from a German torpedo strike by U-68 in 1941. Until divers drained the ship’s oil tanks to prevent environmental disaster, she continued to slowly leak oil until 2015. It’s said that she still does to a degree. The wreck’s location demonstrates how quickly the seabed drops off into the deep around Saint Helena. We are only 30 seconds ride away from the wharf by boat and already we’re floating over the wreck that sits on its side in approximately 45 metrs of water. We meet the hull at 33 metres down and my guide disappears into the centre of a huge tornado of circling trevally. The shoal races laps around him for several rotations before dispersing to reconvene in the deep.

I leave Saint Helena on schedule; the plane lands on the island in good weather to take us back to ‘the outside world’ as the islanders call it. Although I have been on the island for just a week, I feel like I need easing back in to the fast pace of society as I know it.

Saint Helena is special and unlike any other place I’ve visited, although I visualise the pace of life for the island perhaps changing in the near future should they receive the broadband cable so often discussed by its residents. This kind of connection does of course have its benefits, but at the time of writing, I see people sitting and talking to one another in cafés, bars, restaurants and even out on the street. Rarely do I see a person gawping at a mobile phone. There is something deeply magnetic about this tiny piece of south Atlantic rock and I’ve still more of it to explore, both on land and at sea.

There is something deeply magnetic about this tiny piece of south Atlantic rock.