Ahead of the Surfers Against Sewage Plastic Free Awards (November 21), we caught up with CEO Hugo Tagholm to find out more about the plastic-free movement, the importance of getting big business on board and how he came to be an environmental activist.

Oceanographic Magazine (OM): When did you first connect with the ocean?

Hugo Tagholm (HT): I’m an environmentalist before being a surfer. Perhaps some of my earliest memories of the ocean are being on holiday with my parents, looking for things in rock pools or lakes. I was consistently fascinated and captivated by anything I found. When I was a kid I had a  bedroom at home that was filled with all of these natural artefacts and books, which I called The Collection. I’m a Londoner born and bred – now happily transposed and thriving in Cornwall. My dad used to take me and my brothers mud larking on the banks of the Thames looking for clay pipes, pottery, coins and all sorts of stuff. The Thames is a tidal river and people often forget that really the capital is a coastal city. It’s very connected with the ocean via this great river.

OM: Do you think people have become disconnected from the ocean?

HT: I think it’s actually a wider malaise in society. I think people are disconnected, not just from the ocean, but from the environment in general. Our strap line at Surfers Against Sewage is: ‘thriving ocean, thriving people’ and I think that the truth is that people see themselves as part of the human species but separate from nature – when we’re not. It’s an interdependent system where, if nature fails, we fail.

OM: How do you think the narrative around plastic needs to change?

HT: Plastic pollution is a really interesting topic and it’s been an incredible gateway for the public to engage with environmentalism. Because plastic, in particular damaging single-use plastics, are prolific in all of our lives. We all use them every day in some form or other. We need to see a narrative that pushes industry to start producing less plastic in a radical way. We’ve seen shocking statistics this year. Despite the amazing plastic-free communities, the refill movement and all of these attempts at reducing waste, plastic water bottle production continues to rise another 8% this year. The plastic-free movement needs to be a replacement and we need to see the bell curve starting to come down on plastic production. Forecasts don’t indicate that that will happen anytime soon so we need to redouble our efforts.

Plastic isn’t a bad thing, it’s an incredible and versatile substance. So we need to work out both how we eliminate it and replace it with truly more sustainable alternatives. But we also need to work out how we control, contain and properly recycle the plastics that we have in our society. Not offshoring them to far off countries. What we need to do is create a recycling system that truly is circular, that creates high value products that can be used time and time again. Finally, we need to shorten the plastic miles that are now embedded in the broken recycling systems that we have.

Our strap line at Surfers Against Sewage is: ‘thriving ocean, thriving people’. 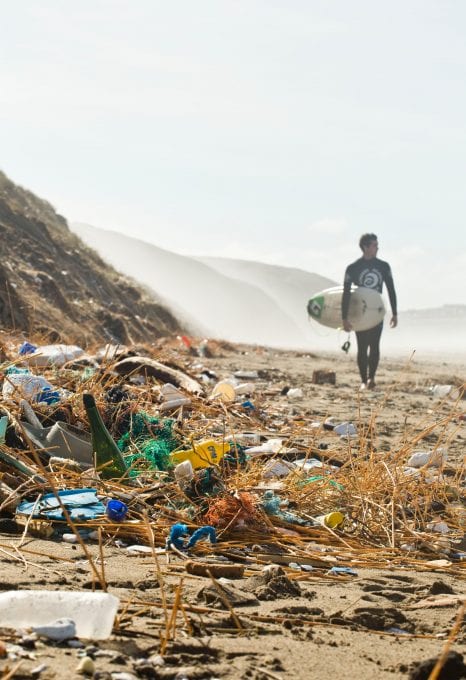 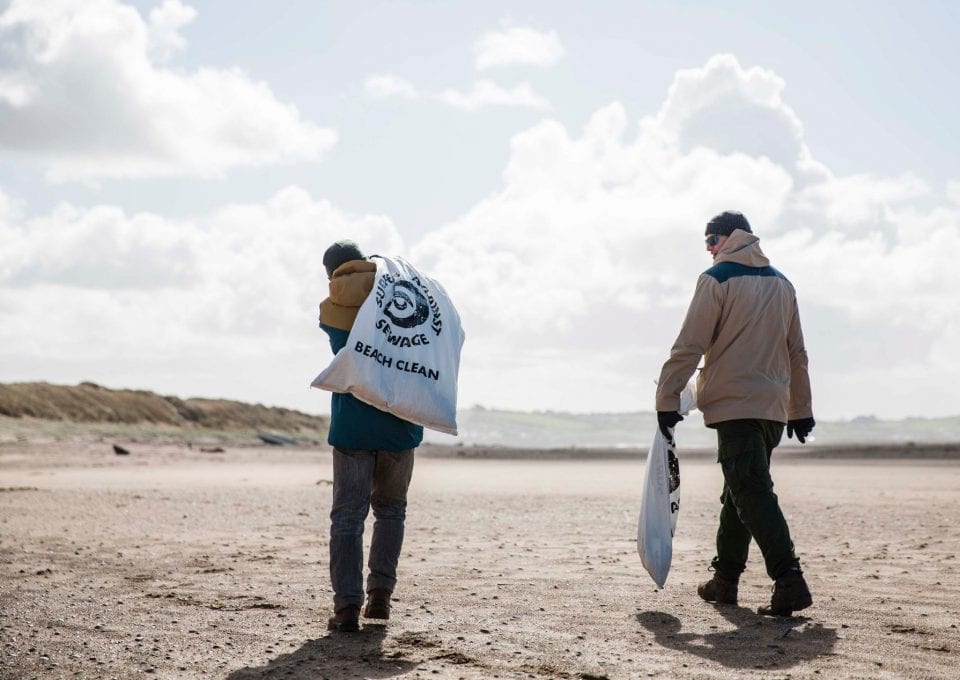 OM: How do we push those big businesses to change, despite the fact that they might lose profit?

HT: We live in an economic structure that makes it difficult for those big companies because they’re predominantly driven by shareholders who want a profit. So, anything that could damage that is seen as a negative. That needs to be challenged as part of creating real change. Eliminating plastics has become really high priority for people. And we need to make sure that we focus on whether we really need something or not. That might do damage to current business models but create an opportunity for a future business model that is less harmful, more progressive and can really give people a sustainable way to live their lives. That’s what we need. It’s government and business that sets the framework for us all to live and operate in. If they don’t change policies and legislation, then it’s very hard for individuals to truly have a big impact. But with every individual action we do take, it’s creating a movement of people with the strength and the voice to force that change to happen.

OM: How can we confront the fact that there’s still a very clear privilege gap within the world of ‘eco-living’?

OM: Do you think there are problems that lie within single use materials altogether?

HT: Absolutely we need to be careful of replacements and actually we do need to start questioning ourselves on the pointless products and materials we have in our world. Really what we’re talking about with the plastic pollution problem is the need for, not just a material revolution, but a systems revolution. Where that comes into sharp focus really is with the so-called compostables, which might only be compostable in an industrial compost. People feel they can assume that it’s a more sustainable product, maybe even that if they chuck it away or if it gets lost in the environment that it will just disappear within a few days.  That’s just not what would happen. So, we need both the materials revolution and the system to contain and control that. It’s not just the material – PET plastic is a very recyclable material but at the moment we haven’t got the system to really capture it all. That’s why we need things like the deposit return system to incentivise the return of all plastic bottles, to give a value to those bottles a and to create very pure recycling that can create a circular economy creating bottles from bottles.

OM: Do you think that a circular economy is probable in the future?

HT: Whether we decide to act now – which we should do because it’s known already that we’re behind the curve – or whether we’re forced to act, a circular economy that truly works is ultimately what has to happen because every material and resource we have is finite on the planet. I do think it’s coming. I think people want it. I think that there is a sense of self-consciousness that is now growing around the level of consumption that we have as individuals. The growing disconnect we have with nature is often masked by the desire for more stuff. But actually what really makes people feel better is spending time, proper and present time, with friends and family or being out in nature, and feeling that there is a natural system in which we operate. I think things are coming home to roost in that respect and the continued consumption can’t carry on masking the deep unhappiness and divisions that we’re seeing in society.

A circular economy that truly works is ultimately what has to happen because every material and resource we have is finite on the planet. 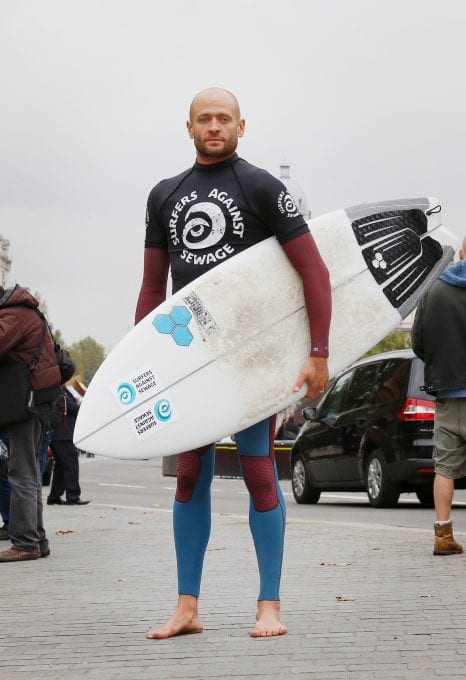 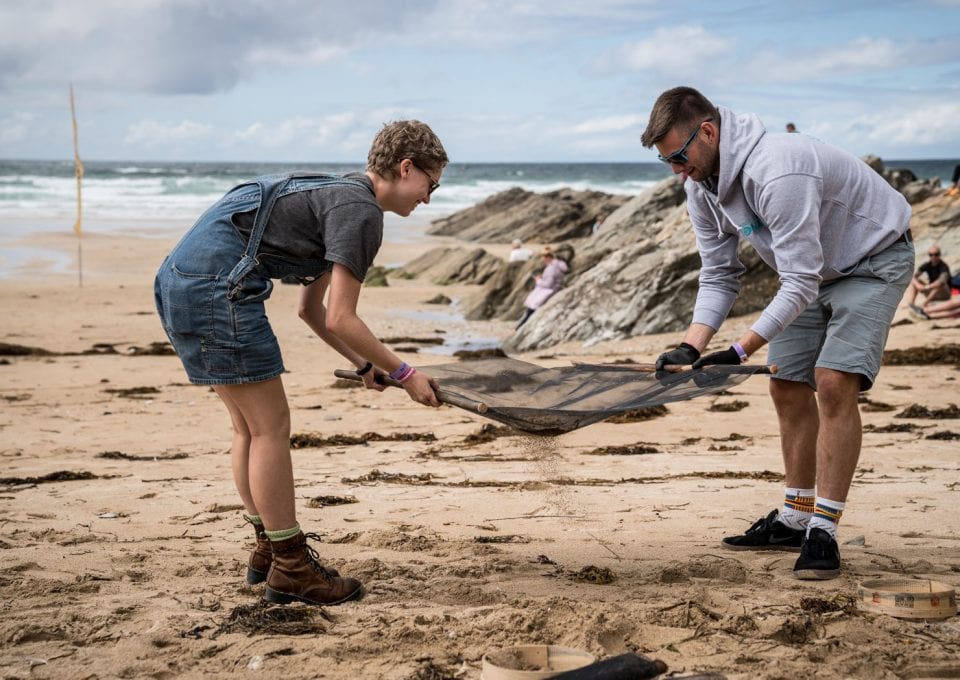 People come together on the beach and in the ocean and are truly unified.

OM: What are you feeling positive about with regard to the environmental movement in the UK?

HT: It’s incredible to see how the plastics conservation has changed and the gateway it provides to for the public to take action, with Surfers Against Sewage and other excellent organisations working in this space. We’ve been so encouraged by that. Over the last decade we’ve gone from just a few hundred people volunteering with us every year at the beach front to over 100,000 people taking part in Surfers Against Sewage activities. We’ve seen the proliferation of interest and traction with our plastic-free community movement. It’s inspiring to see communities from Penzance to Hackney getting involved with that and eliminating single-use plastics and looking at new circular economy systems of putting life back into the high street and local connections. I’m so inspired by the climate movement and the youth movement, which we see as a movement demanding change. We’re seeing people now pushing on our leaders saying: ‘Change has to happen now. Don’t tell us we’re going to be the ones to save the day. You need to do it now. It’s really interesting to see this uprising of people saying. ‘ Enough is enough’.

I think we’ve come through a time of being told we all have to collaborate and homogenise. I’m hopeful – the planet, the ocean particularly, has got great resilience and can bounce back but we need it we need to give it the conditions to recover. We need to stop taking from nature in certain places. We need to let the wilding process take over, particularly in our ocean, to regenerate those spaces that can give us more. The evidence shows that where we properly protect an area of ocean then nature bounces back in the surrounding areas. We need to establish how much nature do we need to fully protect in order for humans to thrive.

OM: Can you tell me what inspired the Plastic Free Awards?

HT: Well, we founded the plastic-free communities movement and we’ve been working on the community front with people for over a decade, running beach cleans and being an authentic voice of the ocean around plastics and pollution. I saw that there was loads of stuff going on in this space, really amazing charities, community initiatives, individuals and businesses all trying to innovate. But there was nothing celebrating that overall movement. So, I hatched a plan with Richard Woolcott while surfing to launch this initiative to celebrate that movement.

OM: Is Surfers Against Sewage hoping to inject some more positivity into the environmental world?

HT: We’re a really optimistic charity and we’re all about people’s connection with the ocean and that invariably for people is a really positive and exciting space to be in. It’s a great equaliser. I believe as Jacques Cousteau said it strips away class and culture. People come together on the beach and in the ocean and are truly unified. I think it’s a great vehicle to communicate hope as well.

Of course there are some really serious that we have to contend with as a species on the planet. We can be part of that, but we can be part of it by giving people a community to operate within and tangible things to take action with, whether that’s a beach clean or joining the plastic-free movement, whether it’s helping  challenge government and industry through  petitions and campaigns. The eyes of the world, the UN, the government are on the ocean and we need to make sure that we use this time wisely. We must be radical and we must be challenging and we must take people forward on a journey that shows the true impact we can have together.

Photographs courtesy of Surfers Against Sewage, by Richie Graham and Andy Hughes.

People come together on the beach and in the ocean and are truly unified.