A wave of joy

A wave of joy

Two fins crested the water ahead of us and I craned over the side to get a proper look.

There must have been at least 30 dolphins in the water, small grey-blue bodies darting around the nose of the boat. Our visitors played with us for a few blissful minutes until the captain picked up pace and we sped away.

I was heading to a remote fishing village to stay at the Madagascar Surf Resort in the south of the country, a spot as picturesque as it is remote. In the afternoons, as the fishermen race boats carved from tree trunks, clouds of steam rise up in the distance from humpback whales crossing the Mozambique Channel.

At sunrise on our first morning a small boat was waiting for us on the beach. Jean, our pot-bellied local captain, stood with one foot on the sand and the other resting on the boat as shards of sunlight pushed through the clouds. A rooster crowed proudly from the nearby village. In the distance I could see thin lines of white appearing and melting away, a silent reminder of the ocean held at bay by our peaceful lagoon. I felt a pang in my stomach, the uneasy mix of excitement and nerves before surfing in a new spot. While my stomach roiled, Jean took us to a peeling reef break called Roger’s Right. It’s a wave that rolls fresh out of the open ocean from Mozambique and onto a green mossy reef.

The wave breaks from right to left in a perfect wall of clear water, starting with fast and powerful take-off that barrels on the big days and mellowing into a gently sloping wall. The sun blazed through the clouds and lit up the ocean as we arrived. We could finally see what we had heard about all along – there wasn’t a single surfer in the water. Only us. We surfed for 10 straight days and met just three other surfers in that time. That’s the same ratio of surfers to humpback whales that we came across.

In the long and sleepy afternoons spent back on shore, the sound of children singing and dancing rang out all day long. When there was even a ripple of a wave, the kids grab homemade surfboards and race into the water naked, without a thought for the sharp coral beneath. From the sun-kissed beach I saw two little boys in the water, one of them surfing a log – an actual log – no thicker than your thigh. The other boy had a slab of wood carved into the shape of a surfboard, with a wide nose and a thinner end for the tail. The pair squealed and hooted as they paddled, grinning so hard that you could see every tooth. Each wave, no matter how small, was a victory. Their arms whirled in circles as they raced back and forth along the surf break.

From the sun-kissed beach I saw two little boys in the water, one of them surfing a log – an actual log. 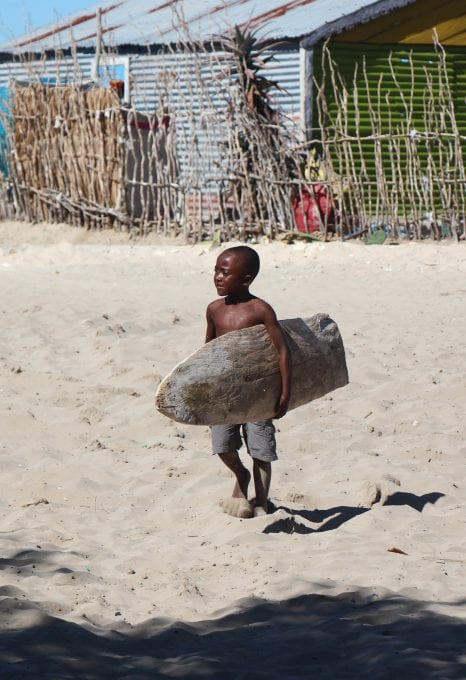 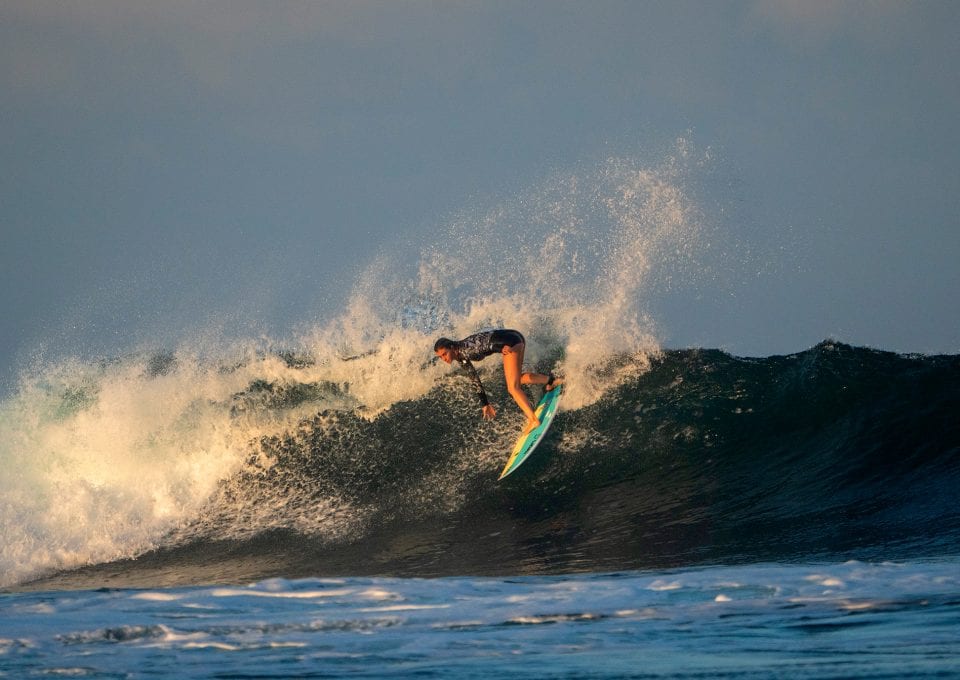 One of the boys spotted me and ran up the beach, blurting out a muddle of French and Malagasy. I guessed that he was asking me to swap boards with him. ‘Of course!’ I said. Ten minutes later, the beaming face was bounding back up the beach with my board, lovingly wrapping up the leash.

Our trip comprised of an assorted crew, two professional surfers from the WSL qualifying series, a physiotherapist from Ireland and a surf coach from Portugal. We had travelled so far from home that we were uprooted from everything we knew. The playful lightheartedness of Madagascar permeated us completely. In the surf we would whoop each other into every wave and shout tips to each other as we passed. Even on the biggest days the atmosphere was lighthearted and supportive which, I noticed, gave me the confidence to choose waves that I would normally shy away from.

One night at dinner Leonor, one of the professional surfers, was checking the surf report and screeched with excitement.

“Eight foot and perfect wind tomorrow!” She said. The others craned over her should to check the report too, everyone was itching with excitement.

In bed that night all I could hear were the waves viciously pounding the reef in the dark, every new crash made my stomach turn. The thought of surfing eight-foot waves filled me with fear. When morning arrived I dragged my sleep-deprived body to the boat, unsure of what was to come. When we arrived at the reef, thankfully the waves had dropped to a manageable four to six foot. I jumped from the boat and raced the others to the line-up.

The take-off spot requires a strong paddle and quick pop up. I watched Lucy and Leonor (the professionals) drop into the steepest, fastest waves with total ease. I moved into position to take a wave myself, a crest of green-blue swell lined up behind me. As the wave rolled closer I could see that it was one of the bigger set waves. I paused for a moment, considering whether to commit. In the distance I heard the hoots and cheers of the others calling me into the wave, so I gritted my teeth, turned towards the reef and paddled with everything I had. The wave surged underneath me, lifted me forwards at speed. I moved instinctually, leaping to my feet and turning to face the wave. My arms opened wide to lift and turn my body. I carved a line along the face of the wave, not the sharp, spraying turns of the professionals, but my own slow carving style. It felt like flying, my feet almost lifting away from my board and coasting on the wall of water.

The thought of surfing eight-foot waves filled me with fear. 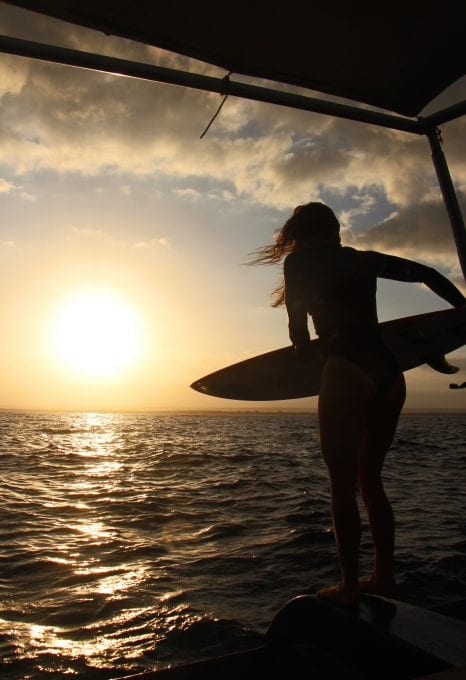 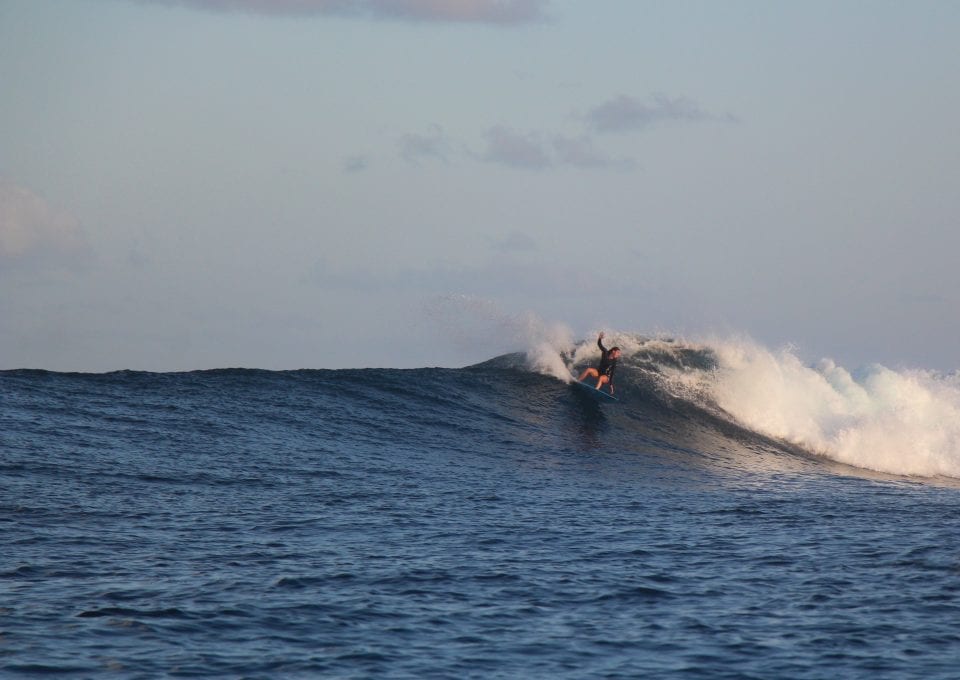 A surge of pure joy pulsed through me, and I understood exactly what William Finnegan meant when he described surfing, as ‘brief, sharp glimpses of eternity’. As the wave slowed, I jumped over the white water and the experience of bliss was punctuated by the silence of the underwater world. After a few days of joy in the water, Leonor introduced an idea that put our experiences into perspective. Affordance is a term that was coined by an American psychologist in the 1970s, the idea that our intentions and capabilities define what we consider to be a suitable environment.

I’ve never come across a description so befitting of surfing before. In an activity so fast-paced and instinctual, intentions define the way we surf. If your sense is that you cannot surf in certain conditions, your body will react suitably, you’ll be too slow on the take-off and you’ll probably bail your board – but if you increase your comfort zone to encompass the conditions you’re in, the chance is that your reactions will adapt to allow you to surf those waves. That might sound blindingly obvious, but the role of fear in surfing is important. When we are confronted by a situation that scares us, our idea of what is possible is limited and as a result, our bodies limit our capacity to handle the situation. If we feel overwhelmed our breath becomes short and our ability to think creatively and to adapt is limited. The sympathetic nervous system kicks into action and we cannot hold our breath as long as normal. When we are controlled by our fears, our affordance, or our perception of what is possible, is limited. Of course, you need certain paddling and pop-up skills to get you around but so much of what limits us is ourselves. In Madagascar I surfed next to women who paddled into the biggest waves, risked the biggest wipe-outs and pulled it all off.

When I found myself in a situation that challenged my comfort zone I thought of those children on the beach, of the joy and curiosity of this vibrant paradise. When I allowed myself to feel comfortable, allowed myself to believe that I could surf in those conditions, I found I could. So now, when things get overwhelming in the surf, I think of those kids dancing on the beach, I choose playfulness over fear.