While in Greece, we stumbled on the ultimate darkwater freedive site.

Matt Longbottom and I were waiting out the last two days of a darkwater freedive trip after everyone else had left. We decided to explore a muddy cave close to where we were staying. We were in for a surprise, that was literally groundbreaking.

As a breath hold photographer, I’ve been teaching and filming freediving for over 20 years. I’ve coached six world records, held records myself, run a popular club, taught thousands of people and taken many of them around the world. For the past ten years, I have specialised in extreme location freediving: exploring on a single breath.

There are a few candidates for what I would call the ultimate dive site – mostly in dark water, or underground lakes, where the utter, complete darkness keeps the water impossibly clear. In my opinion, the ultimate darkwater freedive site needs crystal-clear water, technical access possibilities, it should be deep enough but not too deep and should offer stunning vistas below and above the surface.

We were in for a surprise, that was literally groundbreaking.

The first objective of the group trip was to dive The HMS Perseus, a spectacular British WWII submarine wreck off the south coast of Kefalonia, together with six experienced NoTanx members.

On arrival we were shocked by the devastation from the worst hurricane to hit the Ionian islands in 800 years. Boats were sunk in ports and major towns left without water or electricity for days. The resultant bad visibility in the sea rendered filming virtually impossible.

Kefalonia is traversed by huge flooded subterranean passageways (Karns) which have, at several points, collapsed creating cenotes similar to those found in Mexico. Several of these have become our favourite darkwater freedive sites, which we have been exploring for several years.

During the week, we visited ‘The Duckpond’, the final section of the limestone tunnels that leads out to the sea. An unassuming entrance leads to a series of low-ceilinged caverns decorated above and below the water with amazing speleothems which belie the historical low water levels – stalactites can’t grow underwater. As a senior level group, we were able to explore further, pushing on to an airspace that we called the ‘Toblerone’, a 20-metre-swim into a vast black cavern lined with stalactites.

After everyone left, Matt and I stayed an extra couple of days to show a local friend of ours some caving techniques. I had spotted a muddy hole a few years previous which we thought would be a perfect place to practice abseiling and ascending on a single rope.

Several of these have become our favourite dark water dive sites, which we have been exploring for several years. 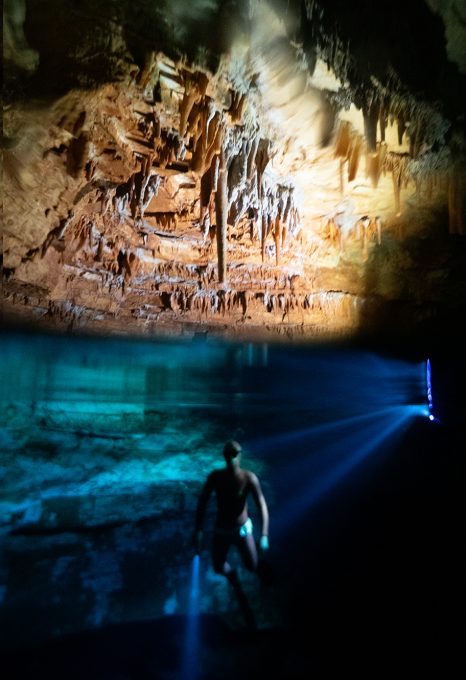 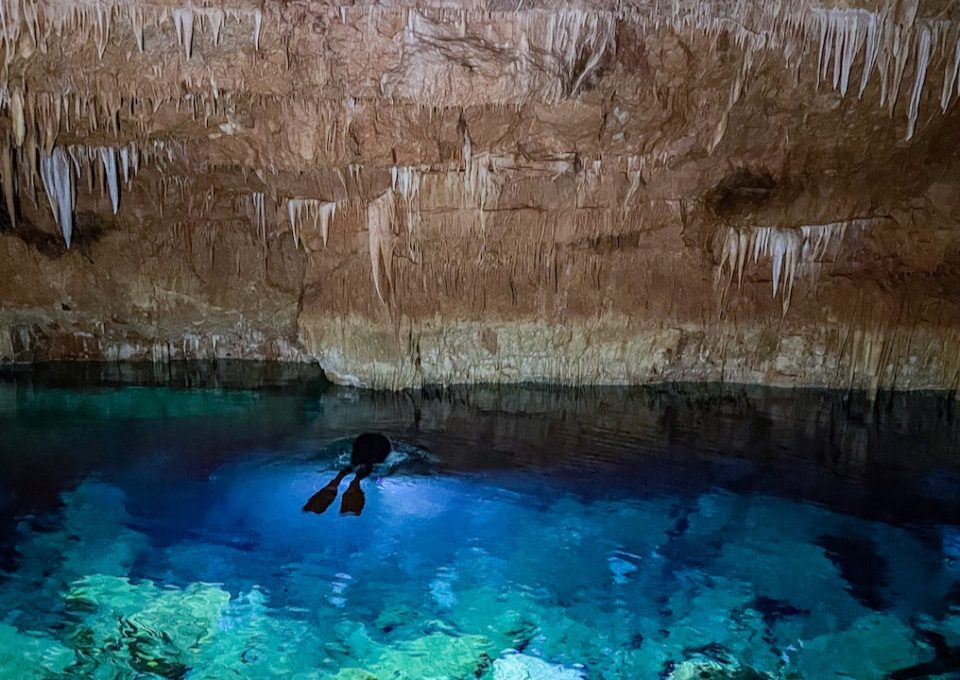 This very dry hole we called the ‘Muddy Hole’. It requires a 30-metre-long abseil into a chamber in which you find a boulder choke, or a natural dead end. When I arrived, I looked through a small hole and saw a shard of water a bit further below. I thought nothing of it. When Matt abseiled down to me, he decided to slip through the small hole to explore.

At this point everything changed. He swore. A lot. Followed by a “you have got to see this Marcus”!

At his behest, I slipped through the letterbox crack at the bottom of Muddy Hole… and entered into a large chamber at ceiling height. It was covered in huge white speleothems, stalactites and curtains, that fell from the ceiling and impressed with 8-metre-high walls.

What we had found, by accident, was an amazing cave, visited by only a handful of cavers since 1970. As caving goes, this was a true jackpot. But even more surprising, dramatic and exciting was the lake of crystal-clear water at the bottom of the scree slope 25 metres below me.

The lake was azure blue in my headtorch, leading off in both directions through heavily decorated tunnels to the left and right. There was no doubt we had to come back to dive. The next day was our last day on the island.

But even more surprising, dramatic and exciting was the lake of crystal-clear water at the bottom of the scree slope 25 metres below me. 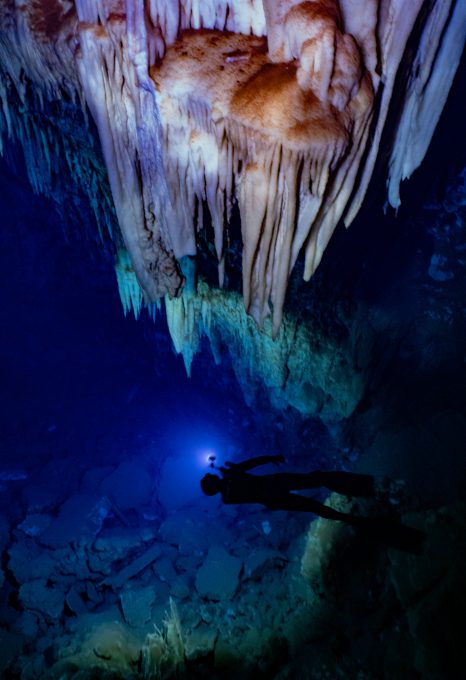 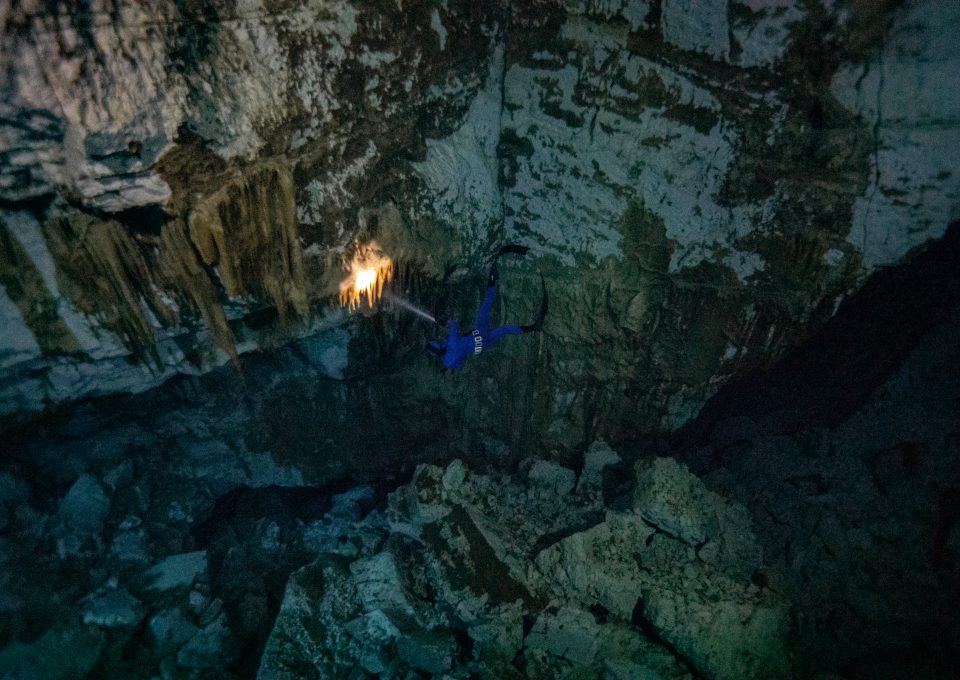 Getting to the water takes best part of two hours, at which point we have to swap our caving gear for the freediving kit, prepare the underwater cameras, torches and video lighting before entering the water. To say we were excited is a gross understatement. At water level, we could see into a tunnel on the left, lined with huge stalactites, columns, flow stone and curtains. As we moved into the tunnel, it opened into a ten-metre-wide and five-metre-high chamber, the gin-clear water dropping off some 15 metres below us. This National Geographic worthy chamber, had only be visited by a couple of cave diving teams – but they had entered through a long underground tunnel that promised easier access for scuba diving.

I had trouble holding the camera steady as we swam around a perfect circle of stalactites that reached down from the ceiling to form a cage at the surface. In places, the formations slid effortlessly through the surface of the water falling into the dark depths below. The second chamber was formed of pristine ice white flowstone, flecked black by the few bats that had made it so far underground.

We dived, filmed and stared in silence. We returned to the main chamber and decided we still had time to see if we could enter the right-hand tunnel. To cut short. We could. Just. We had to duck under 100 razor-sharp stalactites, whose growth had been terminated by the water. After all, stalactites can’t grow underwater as they are formed by drips depositing their mineral loads as they fall, meaning these tunnels were once dry or at least the water level was significantly lower. Only a freediver could enter this darkwater freedive passage.

We had to duck under 100 razor-sharp stalactites, whose growth had been terminated by the water. 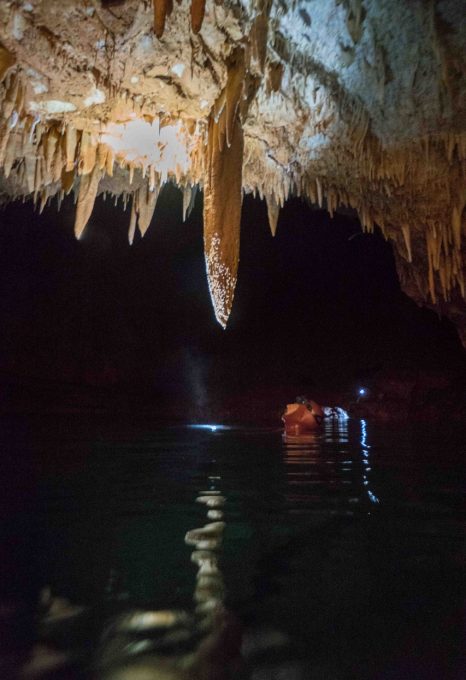 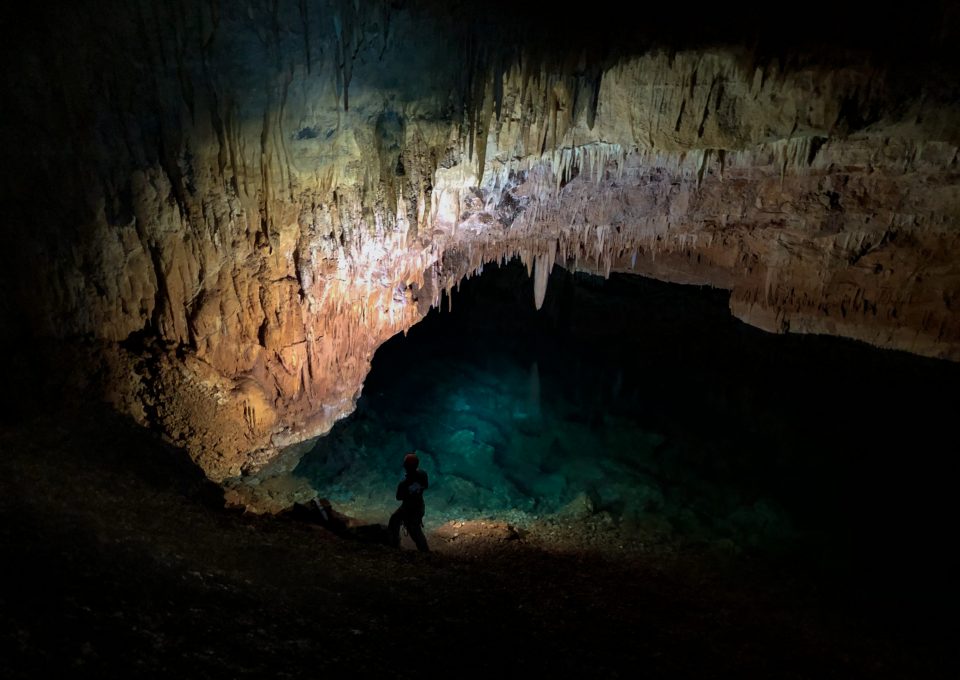 Excitement, adrenaline, cold and the physicality had taken its toll on us.

The passage continued, more and more stalactites measuring several metres touched the water, our movement governed by a head size path through the maze. We knew we were the first people ever to have entered this chamber. And the passage continued. A total of four chambers, each more magnificent than the last, hidden for centuries in complete darkness protected by a calcium portcullis or pure, glistening white.

Below us we could see the deep tunnel and cave line traversed by the intrepid scuba divers from another entrance some 200 metres away, but they could never surface here. Looking from under the surface 1,000 scimitars hung down. We identified a safe surfacing point, only then could we safely drop down into the void below, our chosen exit had to be lit by our buddy or there was no way we could have located it from below.

Excitement, adrenaline, cold and the physicality had taken its toll on us, our breath holds were short, our dives truncated. We returned to the beacon of light we had left at our entry point and slowly climbed out of the water. We knew we would be well on our way home to England within 24 hours so took a few moments to appreciate the spectacular location as we donned caving harnesses and started the long climb out.

A truly awesome experience. One that I feel compelled to share with others through caving, special response team (SRT) and dark water training. We found the ultimate freedive location.

Excitement, adrenaline, cold and the physicality had taken its toll on us.