“This time Triangle Island was our destination. This time it would be awash with life.”

Off the northwest tip of Vancouver Island, with nothing but ocean between it and Japan, is a speck of land that throngs with life. A wild corner of the world where millions of seabirds call into the wind, and sea lions raise their young. An island alive and thriving as a result of both isolation and protection. In Issue 15 of Oceanographic, Ryan Tidman shares with us his expedition to Triangle Island.

I had finally arrived at Grant Bay, a little slice of seemingly tropical paradise on Vancouver Island’s west coast. It was challenging to get to, driving for what seemed like hours on unmarked logging roads, slowly winding towards the Pacific Ocean.  I was driving out to meet Ian McAllister, a renowned conservation photographer and activist in British Columbia (and a prior Oceanographic contributor) to begin the second leg of our Vancouver Island west coast trip, our end destination Bella Bella, known as the gateway to the Great Bear Rainforest. The west coast of Vancouver Island is less travelled compared to the sheltered east coast of the island. I experienced that firsthand, becoming quite seasick only hours out of Victoria as we sailed into unprotected Pacific waters. Twenty-five nautical miles off Vancouver Island’s northwestern tip lies the infamous Triangle Island. The cone-shaped rock sits in the Pacific Ocean past the Scott Islands group. It is the last bit of land before Japan. Not many people have heard of Triangle Island, and even fewer have set eyes upon it.

The marine charts told me we were getting close, but I couldn’t see anything on the horizon due to a low hanging fog. Then, as if from behind stage curtains opening for a show, the island appeared. The cliffs were jagged and steep, land the colour of rust because none of the low shrubbery had begun the transition from winter to spring. Pinnacles of rocky monoliths were visible in every direction; a landscape photographer could live a happy life here. Except they actually couldn’t – life is pretty inhospitable on Triangle Island. Waves upwards of 100ft have been recorded, and consistent gale-force winds prevent any flora larger than small bushes from growing. Salmonberry and salal bushes cover the vast majority of the island, but both experience stunted growth due to the weather.

Not many people have heard of Triangle Island, and even fewer have set eyes upon it. 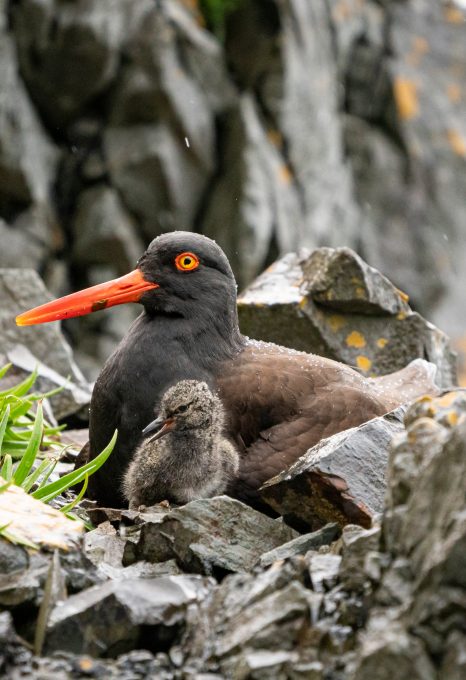 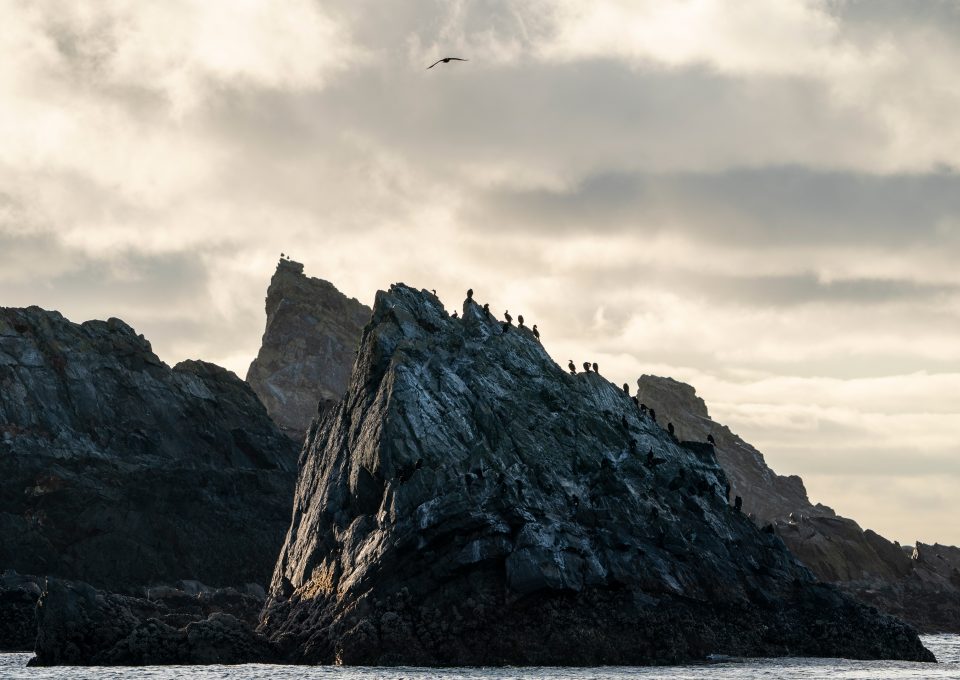 Not far from the island’s jagged cliffs and rocky shores, an upwelling of nutrients is provided offshore at Cook Bank, where deep cold waters are pushed up from more than 6,000ft deep. For humans, this doesn’t mean too much (other than good fishing), but for seabirds, this means life. This never-ending food supply is ideal for breeding birds and the needs of their chicks. This is why they visit the island in their millions.

The island’s first human visitors were likely First Nations people thousands of years ago, who would have canoed from similar locations where we departed, but without a sail or engine. Such expeditions would have taken a great deal of planning, and luck in avoiding the worst of the Pacific Northwest’s wild weather. There are numerous midden sites on the island, containing the remnants of bountiful forage.

The island was rediscovered by the British Admiralty in 1849, when it was given its present name due to its geometric shape. By the early 1900s, the number of shipwrecks surrounding the island prompted the then Canadian Department of Marine to build a lighthouse. Triangle Island’s peak is nearly 700ft above sea level, making every bit of the isolated piece of land steep. Very steep. In 1909, a trolley system was blasted into the craggy cliffside side, and only a year later, in 1910, a 46ft lighthouse was erected on top of the island. A surveyor from the Department of Marine said: “We laid out the site at the summit of Triangle Island 650ft above the sea, for a powerful first-order light, which will ultimately develop into one of the most important of all lighthouses on this coast.” The Department of Marine did not appreciate that the lighthouse would be covered in fog, mist or low-hanging cloud for 240 days a year. 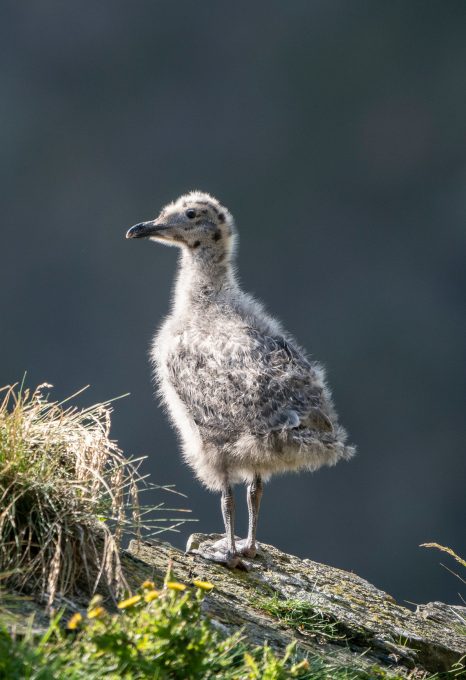 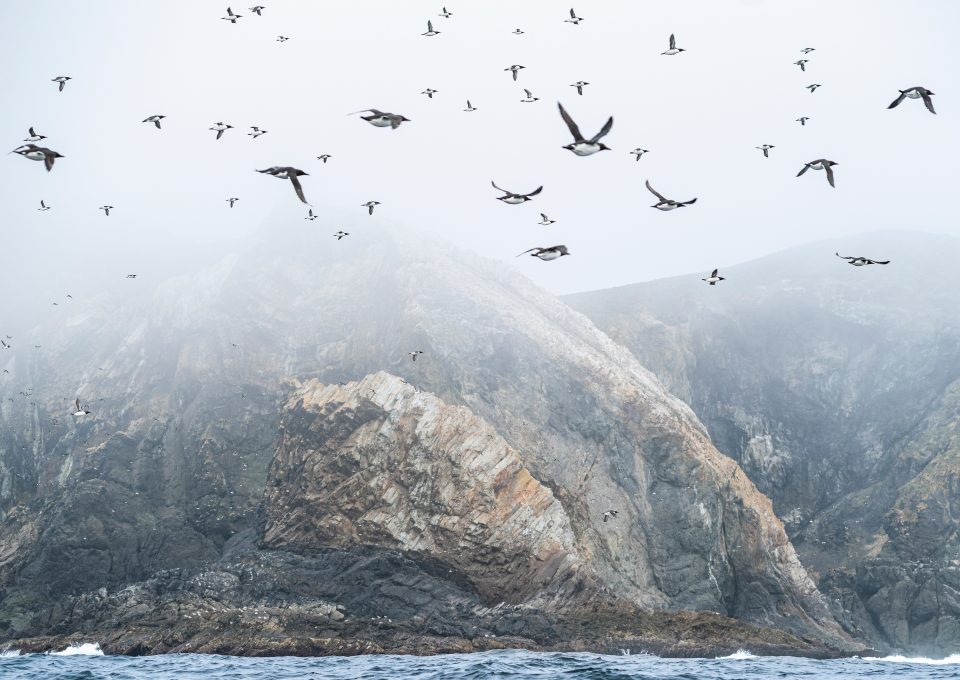 As we left, I took one final photograph of this distant and epic island, for myself, to remember the visit.

The treacherous winter weather soon proved too much for the island’s inhabitants, and many of its manmade structures. By 1912, a number of the island’s dwellings were deemed uninhabitable. The lightkeepers reported feeling nauseous from the amount their facilities moved in the hurricane-force winds. They had to use a rope system to move safely from building to building. In 1918, after rebuilding and a turnover of several lightkeepers, a ship named the Galiano made an emergency supply drop to the island. With food and rations delivered, and the ship departed for Vancouver Island with one of the lighthouse keepers aboard. It was never seen again. The last calls from the boat were heard only by the radio operator on Triangle Island: “Holds full of water. Send help.” By 1919, the lightkeepers were permanently removed from Triangle Island. The radio station operators followed two years later in 1921.

And so, the island returned to nature. Once again, the only inhabitants were the millions of seabirds. Today, the island is typically visited by fewer than ten researchers a year. Access to the Anne Vallée (Triangle Island) Ecological Reserve (named after bird researcher Anne Vallée, who died as a result of a cliff fall on the island in 1982) is strictly regulated by the government. Public access is prohibited. I felt blessed to have been able to spend a few days exploring the island with Ian in the spring season, a spontaneous stop-off on our journey north to the Great Bear Rainforest. I admired its raw beauty, but we were too early to witness the birds in significant numbers. As we left, I took one final photograph of this distant and epic island, for myself, to remember the visit. I never imagined I would see the island again.

Several months later, the phone rang. Ian was working on a television project about Steller sea lions for National Geographic. They intended on filming at Triangle Island, and they needed a drone pilot. I gleefully accepted. This time Triangle Island was our destination. This time it would be awash with life. With winter having passed, and taken the worst of the weather with it, the island had transformed. Dark brown cliffsides had turned into lush green ranges – almost the entire island had changed colour. The island’s plants flourish from the nutrients derived from vast amounts of guano the seabirds deposit every year. Those same birds use the plants to shelter from the weather and make their nests. It is a symbiotic relationship that provides the island with an abundance of life. I saw murres, puffins, auklets and various other seabirds flying in every direction. I could hear and smell the thousands of Steller sea lions laid on the beaches before I saw them…

As we left, I took one final photograph of this distant and epic island, for myself, to remember the visit.