The trouble with measuring 'bonsai' sharks

The trouble with measuring 'bonsai' sharks

That makes them difficult to study. And I should know. I first started working on whale sharks, the world’s largest fish, when I moved to Mozambique back in 2005. They’ve stymied and frustrated me ever since.

Unlike a lot of scientific work, the fundamentals of whale shark field research aren’t complicated to explain. Every shark has a distinctive and unique pattern of white spots. That makes it easy to identify individuals. I can take a photo of each side of the shark and work out who it is later. Assigning a sex isn’t challenging either. I dive underneath each shark to look for claspers, the male reproductive organ, on their inner pelvic fins. If there are claspers, it’s a male. No claspers? It’s a female.

How big is it? Well, that is more difficult to answer. First, I tried guessing their length. Unfortunately, it doesn’t work well. When I was first processing whale shark sizes, including only size estimates from trained, experienced research staff, I found that individual sharks had been assigned size estimates of 3-8 metres over just a few years. Not helpful.

Some time after, I was chatting to a friend studying sharks in Australia. She told me about parallel lasers. You aim the two lasers at the side of the shark, take a photo, and use the laser dots as a scale. Awesome.

To test that approach, my research buddy Andrea Marshall and I built a frame with attachments for the lasers to measure manta rays and whale sharks. We are very clever, so we made it out of stainless steel to ensure it wouldn’t rust. It weighed 10 kg. It almost drowned Andrea. Didn’t rust though. Phase two was rebuilt from marine aluminium. It worked. We now had two green laser dots on each shark, calibrated to be exactly 50 cm apart, providing a scale bar to measure total length. That allowed us to determine that male and female whale sharks both become adults at 8–9 metres.

How do we know? I mentioned above that male sharks have paired reproductive organs called claspers. The claspers rapidly increase in size as the shark hits the final stage of maturity. We can measure clasper size using the lasers, too. This may be an invasion of privacy, but at least we don’t have to physically measure them. Lasers are better.

It’s harder to confirm adulthood in female sharks. Only one female, harpooned in Taiwan in 1995, was definitely pregnant. She was 10.6 metres in length and had 304 tiny pups inside. Field studies off Mexico and the Galapagos, where large females are seen around seamounts, have shown that the smallest females presumed to be pregnant are about 9 metres long.

We also know, from fisheries records, that whale sharks attain a maximum length of 18-20 metres. A shark that size is old. Exactly how old, though? We don’t know. Sensing a theme yet?

Most species of sharks have growth rings, like a tree, in the middle of their vertebral column. Whale sharks have rings too, but… it’s complicated. A tree doesn’t move. It grows faster or slower depending on environmental conditions. That means you’ll get a “light” band in summer, when the tree was growing fast, and a dense ‘dark’ band in winter, when it grew slowly.

Whale sharks give a bubbly chuckle at the concept of winter. They can easily swim over 10,000km each year, which lets them choose their own preferred water temperature. That screws up their growth rings, as we can’t tell if they correspond with a calendar year. Fortunately, by re-sighting and re-measuring individual sharks in the wild, we can determine their growth under natural conditions.

Only one female, harpooned in Taiwan in 1995, was definitely pregnant. She was 10.6 metres in length and had 304 tiny pups inside. 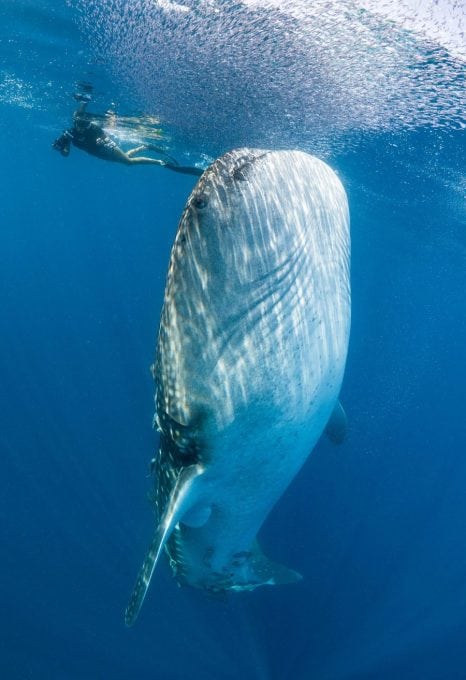 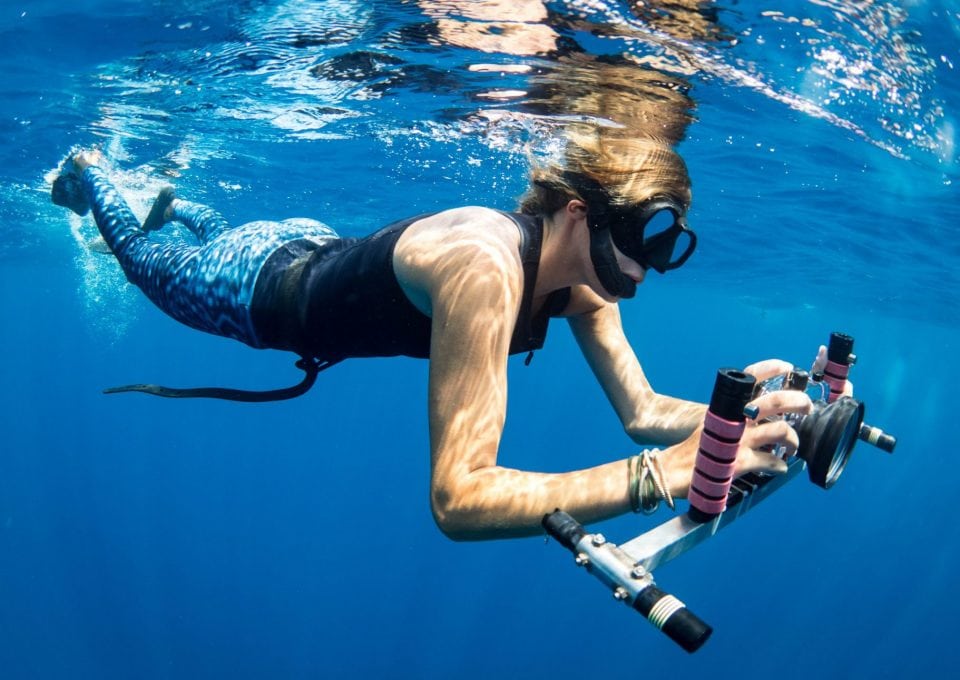 Greenland sharks, living in cool Arctic waters, grow at less than one centimetre per year. A five-metre female was estimated to be 392 years old.

For that, we’ve focused on our study site at Mafia Island, Tanzania. Whale sharks live off Mafia year-round. We were able to measure and re-measure the same sharks for up to three years. Except, when we analysed those numbers, we found that half of them exhibited ‘negative growth’. They’d shrunk. Wait… what?

As it turns out, whale sharks grow really, really slowly. Either that, or the lasers aren’t very precise. Or both. Probably both. We even published the results. “Repeat measurements of individual whale sharks yielded… implausible… growth rates.” How embarrassing. Still, that slow growth is interesting.

Our field season at Mafia is for a few weeks towards the end of each year. Last November, I saw one of our old friends, MZ-136. He’s the only shark I’ve seen in two countries. I first identified MZ-136 off Tofo Beach in Mozambique back in November 2006. Sometime between then and 2012, when project leader Chris Rohner first saw him in Tanzania, he’d swum the 1,840km north to Mafia Island. He lives in Tanzania now. We’ve seen him there every year since 2012.

Now, I’m not saying that he hadn’t grown in the interim. Visual estimates are, as I noted earlier, inexact. He’s probably packed on mass too, as whale sharks start bulking up at around that size. Still, he hasn’t grown much, and he’s not even an adult yet.

Similarly, off Ningaloo Reef in Australia, two whale sharks (“Zorro” and “Stumpy” – okay, they’re better names than we give) have been returning most winters for more than 20 years. In the paper describing the sighting history of the two sharks, lead author Brad Norman wrote, “their growth has been negligible over the past two decades.”

Humans reach (biological) maturity at a mere 13-17 years. The longest-lived person was 122 years old at her death. Large sharks tend to be long-lived and slow-growing. Greenland sharks, living in cool Arctic waters, can be more than six metres long at full size, and grow at less than one centimetre per year. A five-metre female was estimated to be 392 years old. Female white sharks only become adults at about 33 years old, and are estimated to live to at least 73. Their smaller relative, the porbeagle shark, is estimated to live to 65. Even spiny dogfish are thought to live for at least 80 years.

Though whale sharks live in warmer water than those species, and may grow faster as a result, 80-100 years seems like a reasonable estimate.

We don’t know much about whale sharks. What we do know is that they’re globally endangered. Half of their population has been killed since the 1980s.

Answering these questions about their growth and age, as frustrating as it has been, is critical to their conservation and management. Once we know their age at adulthood, their maximum age, and how often they have pups, we can calculate how fast the species can recover from their current overfished state – and estimate the risk of contemporary threats.

We’ll be switching techniques this year. The lasers have been retired, replaced with stereo-video. We should be able to improve both the accuracy and precision of our results. Hopefully we’ll get to measure MZ-136 properly this year. Though the sharks still routinely destroy my preconceived notions, I still think it’s amazing that I get to watch these sharks grow up.

Or not grow. Whatever.

Greenland sharks, living in cool Arctic waters, grow at less than one centimetre per year. A five-metre female was estimated to be 392 years old.