“Because the dolphins have never been tagged, the time it takes to locate them has always varied, from hours to days, but they had, up until 2013, always been found.”

In the summer of 2013, a resident pod of dolphins suddenly disappeared from a site in the Bahamas. Why? And if they were still alive, where had they gone? In Issue 09 of Oceanographic, Bethany Augliere shares the full story

Marine biologist Denise Herzing has been studying Atlantic spotted dolphins for decades. So long, in fact, that she currently leads the longest-running underwater study of dolphins in the world – the Wild Dolphin Project (WDP), which was established in 1985. During that time, Herzing and her team have made discoveries regarding dolphin behaviour, social relationships, feeding, movement patterns and genetics. She remains fascinated by dolphin communication (one of the primary reasons for the project’s launch), particularly whether the animals have an established language.

Beyond the science and discoveries comes the personal element. Herzing and her researchers travel from Florida each year to the same 180-square-mile research area in the Bahamas and have gotten to know the resident dolphins of Little Bahama Bank (LBB) well, the regularity of interaction fostering fondness. The dolphins even have names. I have been fortunate, over the past ten years, to be one of Herzing’s WDP researchers. I know how characterful Atlantic spotted dolphins are, and how easy it is to bond with them. I also know how important WDP’s ongoing research is – particularly in an increasingly changing ocean. It is that mixture of science and sentiment that makes the work so special. You can imagine our surprise and concern then, both as scientists and as people, when, several weeks into the research season of 2013, the dolphins were nowhere to be seen. In all the years that Herzing’s 65-foot research vessel Stenella had made the six-hour journey over from Florida, the dolphins had always turned up too – scientists and subjects as reliable as each other. Because the dolphins have never been tagged, the time it takes to locate them has always varied, from hours to days, but they had, up until 2013, always been found.

I know how characterful Atlantic spotted dolphins are, and how easy it is to bond with them. 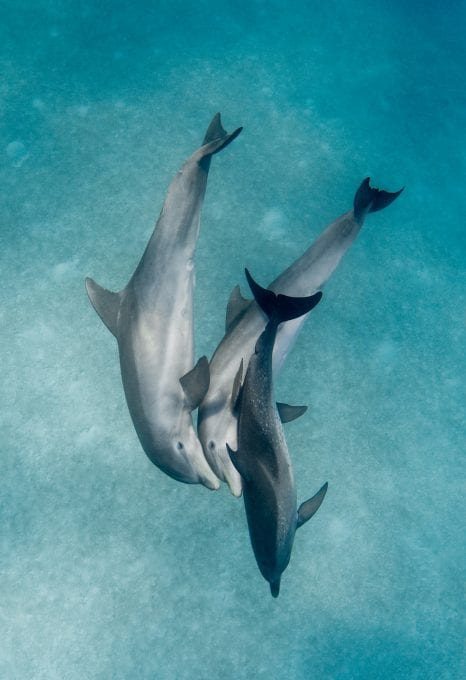 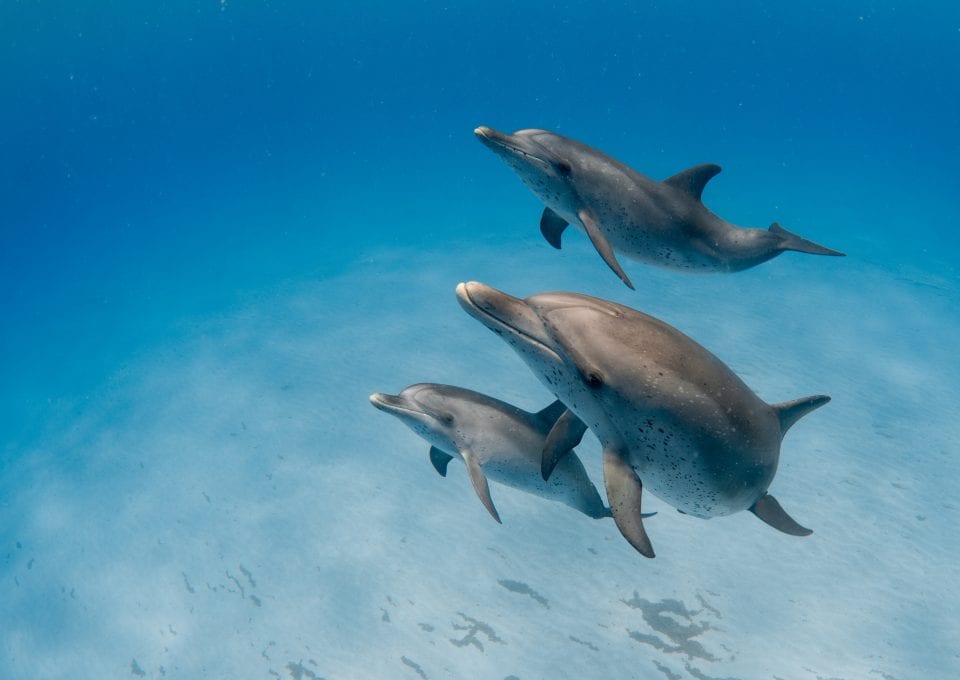 We searched everywhere, including the most extreme areas of our regular field site. The dolphins were gone. They were not in deep water, where they can often be found at night feeding on squid and flying fish, and they were not in shallow sandy-bottomed water where they often hunt for razor and lizard fish in the day. Where were they? Had they died?

“My first thought was to check on things like orcas in the area (known predators of dolphins), Navy sonar exercises and impacts from Hurricane Sandy,” says Herzing. “What could make a resident group of dolphins leave their home of at least 28 years?”

Our worst fear was that the dolphins had died during Hurricane Sandy. It wouldn’t have been the first time their population had been impacted by hurricanes. After three hurricanes passed over the site in 2004, approximately 30% of both the local spotted and bottlenose dolphins were never seen again, presumed to have died.

“We canvassed the central area of the bank which was vast, quiet and empty,” recalls Adam Pack, a marine mammologist at the University of Hawaii at Hilo, who has been collaborating with Herzing since 1997. “We travelled north penetrating further than I ever recall, hoping that maybe we would locate the dolphins we had grown to know so well in a new location. We did not find them. The bottom line was that we simply did not know; they appeared to be gone.”

After three 10-day research expeditions with no luck, we were getting desperate. We decided that on the next trip we would head south to Great Bahama Bank (GBB), the “closest ecological parallel sandbank habitat” to the research site, according Herzing. GBB lies 161km south of LBB and reaching it requires crossing a deep-water channel. It is also home to another community of spotted dolphins, studied by another group of scientists – and by the WDP in the 1990s.

What could make a resident group of dolphins leave their home of at least 28 years? 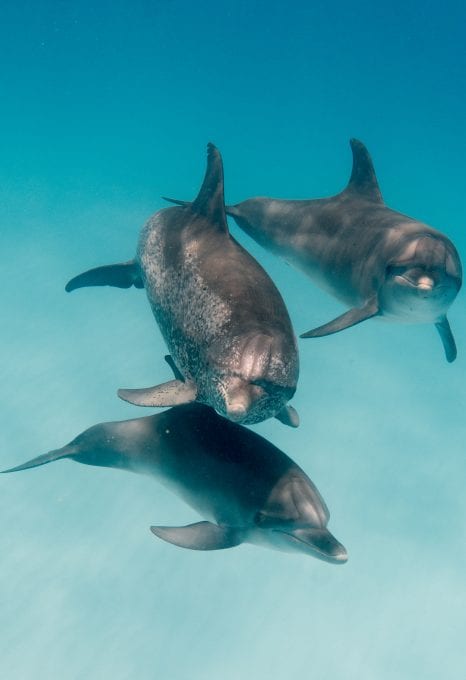 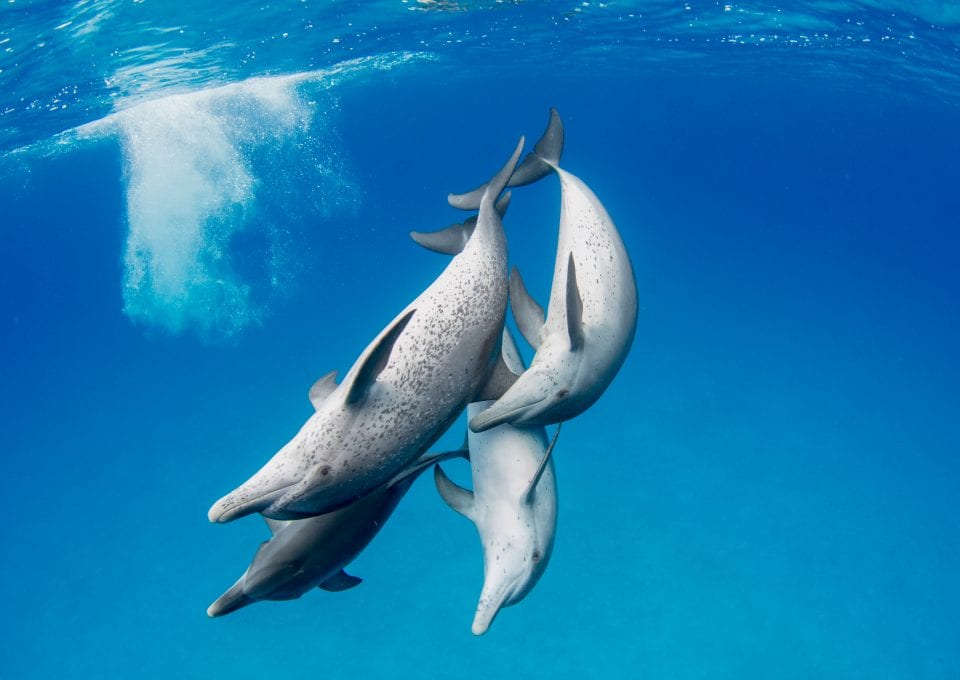 As the torpedo-shaped mammals approached, I glimpsed familiar spots and scars.

We left Florida early on a Tuesday and after three long days on top of what was beginning to feel like an endless summer, we finally found dolphins as the sun was setting on Friday. The pod came leaping toward our boat, seemingly excited to ride our bow wave. Despite the setting sun and choppy conditions, we cut the engine and anxiously slipped into the water with our cameras – we needed to identify the pod. Could it be the missing dolphins of Little Bahama Bank?

As the torpedo-shaped mammals approached, I glimpsed familiar spots and scars. It was Baby with a new calf, Piglet; Noldus with her younger sister Nereide; Pointless and Bamboo. The dolphins were eating snakefish on the seafloor in about 10m of water. A sense of relief washed over me, over everybody; they were alive.

Having found a few of LBB’s resident pod, we were hopeful we would find others throughout the remainder of that year’s season – and we did. During the remaining summer months, we located Amanda, Bonito, Caroh, Geo, Kai, Linus, Mugsy, Meridian, and Sunami, among others, all of them having taken up residence at GBB.

“I felt relieved, of course, to find the group alive and well,” says Herzing. “But at the same time, the dolphins didn’t seem to react upon seeing us. That surprised me. They just carried on feeding.” The dolphins spent a lot of time traveling too, rather than playing or socialising. “I suspect the dolphins were traveling a lot that first summer to do reconnaissance of the new location for food, safety, and the like,” says Herzing.

“Reassured the dolphins had not perished, we went into science mode to figure out what factors might have led to this change,” says Pack. Our first thoughts were that they had likely moved for two reasons that drive most animal behaviour: food and sex. Could the dolphins have left LBB due to a lack of food or to search for new mates?

As the torpedo-shaped mammals approached, I glimpsed familiar spots and scars.