“Lying on my back with water over my ears is as close as I can get to my mind being still.”

Though I’ve swum outdoors all my life, it was in my late twenties that my love of wild water really intensified. I began to find myself drawn to water at every opportunity and planning trips to explore new bodies of water. A three-week round trip to the Isle of Skye proved the ultimate immersive experience. We parked the van next to a Loch in pouring rain and spent a night buffeted by the wind. When we poked our noses out into the open the following morning, we were greeted by sunshine and still waters. My first tentative steps felt like a new adventure unfolding. Knowing I’m about to plunge into cold water always brings such a wonderful sense of anticipation. I felt the initial tingle around the ankles, followed by the shock around the throat. I dived underwater and an instant hit of joy reached my brain, followed by an overwhelming sense of calm. To this day, lying on my back with water over my ears is as close as I can get to my mind being still.

I was lucky enough to grow up in Yorkshire where there’s an abundance of water – more often than not, falling from the sky. My dad taught me to swim when I was a few months old and most pictures from my childhood feature me exploring some form of water. Nothing else emulates the feeling of freedom and absorption quite as magically as water. Rivers are my favourite, add in a waterfall and I’m sold. Rivers are ever-changing and, like the sea, need respect to understand their flow. I grew up spending every free sunny day by the river with a picnic and a healthy amount of unsupervised time to roam free. I don’t ever remember not feeling confident when floating in water and that feeling has only grown as I’ve aged.

I felt the initial tingle around the ankles, followed by the shock around the throat. 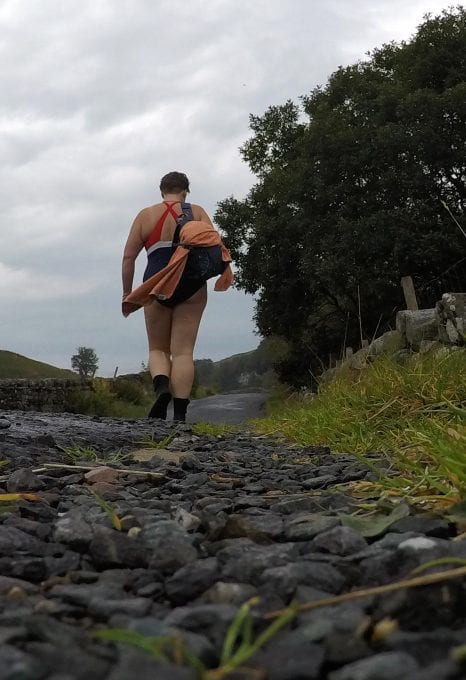 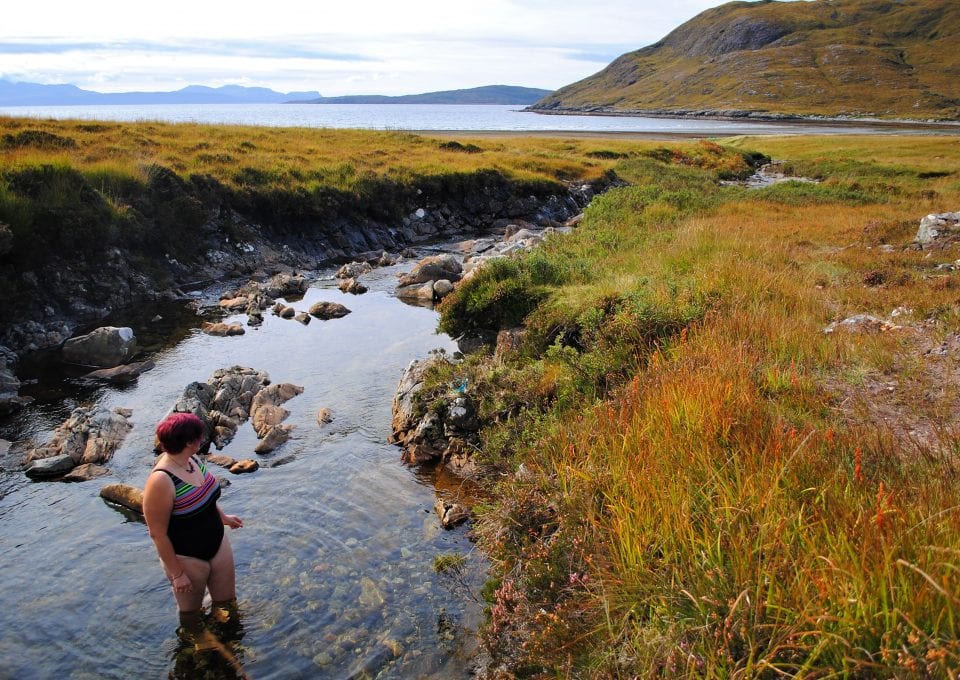 In 2015 I was living in Huddersfield and studying for a degree in mental health nursing. I’d found a local water hole by way of Sparth which is a reservoir owned by the canal and river trust and one of the few bodies of water in England with inland water access rights, hard won by some fabulous local people. I swam through the summer, spending long evenings after work lying by the water, dipping every time I got too warm, reading a book, chatting to other swimmers as they came and went. When autumn arrived I realised I didn’t want to stop swimming and happened across a seasoned group of hardcore folk who swam right through winter. With their encouragement I carried on and as almost all winter swimmers will tell you, nothing binds you faster to new friends than taking your clothes off at the side of a body of water and plunging into ever decreasing temperatures. The shivering chatter afterwards is what makes it. There’s something about being outside, with great expanses of sky above you and ever-changing weather engulfing you, that seems to open the mind and the heart. You find yourself confessing fears, hopes and dreams you might not otherwise utter to a close friend.

As someone who’s struggled with bouts of depression throughout my life, I’ve found wild swimming a highly beneficial activity in pulling me through it. Though cold water swimming can’t immunise me from depression I’m certain without it my experience would be worse. I’ve met some wonderful folks whilst wild swimming who are quite content to let you cry all the way to the river and will just hand you a tissue and another slice of cake without judgement. The most wonderful feeling for me is to lie on my back with the water covering my ears, staring up at the sky, feeling my mind calm a little. There’s something so incredibly freeing about the weightlessness of being held by water. In winter the sting of the water shocks your brain into a reset and turns your skin the most amazing shade of pink. Afterwards you’re left with the most wonderful sense of being cold to the touch but with a fire inside that carries you through the day.

The film Wild Swim came about when Kate Drucquer who is a freelance videographer, contacted me on Instagram to say she was interested in making a short film about wild swimming. She said that rather than just making a film about outdoor swimming as a sport she wanted to focus on what it meant to someone. Kate mentioned that she’d seen one of my posts where I described my body as being ‘a vessel for adventure’ and said she could really relate to the idea. Swimming outdoors was definitely a huge part of me making the shift from judging my body for how it looked to thinking about my body as this instrument that facilitated me doing things that bring me joy.

Growing up I very rarely saw my body type represented and at school I really struggled with body image and self-esteem. I didn’t fit in to the classic model of school sports and as a consequence saw myself as a failure and struggled to find an activity that suited me. Swimming is something that my body can do exactly as it is without anything needing to change and I’ve found that I’m proud of its ability to withstand cold temperatures, swim against the flow of rivers and jump from cliffs into a sparkling seas.

At outdoorsy events I often find myself the largest woman in the room and have questioned my right to be there and assumed that everyone else was wondering where I fit in. I was delighted that Wild Swim was selected as the winner of the Adventure Uncovered Film Festival (AUFF) summer short, particularly given the emphasis on environmental and social impact within adventure. I was subsequently asked to attend the festival for a Q&A and felt very warmly welcomed by the team. There was a magical sense of coming full circle since I’d had the courage to post a photo of myself in a bright pink swimsuit online imploring others to accept themselves, which in turn led to Kate asking me to make the film and ultimately to finding myself on stage at AUFF standing beneath a giant version of that very same photo. 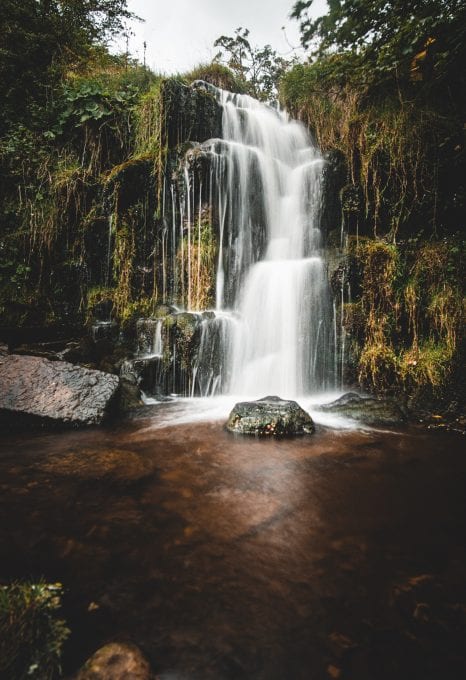 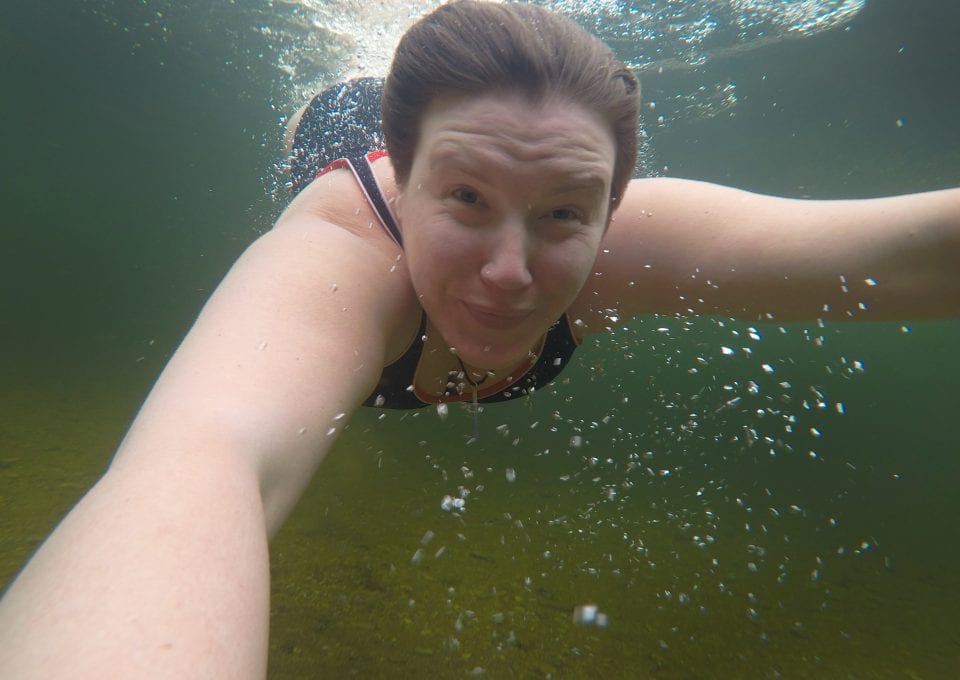 I’ve realised that my experience of using it as a relief from depression is clearly one shared by many.

In the film I said that if 15-year-old me had seen my body type represented more then perhaps I would have felt more at peace with the world, so my hope is to see a general shift in perceptions of who the outdoors is accessible to.

The majority of images in the public eye are still heavily biased towards a certain body type and there’s remarkable lack of diversity. Social media has definitely brought about some change in this area and certainly within wild swimming I feel there is much more diversity. I use Instagram exclusively to follow wild swimmers and there are people of all ages being their beautiful selves in the public eye. Being around other wild swimmers has helped me enormously in accepting myself. I have no qualms about changing in front of fellow wild swimmers and they are generally a no-nonsense lot – speed is far more important than dignity when it’s 3°c outside.

The film has now been screened at three different film festivals and the response has been overwhelmingly positive. Many people have told me it’s reawakened a love of wild swimming and others have said they’ve tried it for the first time after seeing the film. Fellow wild swimmers have approached me to tell me that the film encapsulates their feelings about wild swimming. I’ve realised that my experience of using it as a relief from depression is clearly one shared by many. The visceral sense of being alive in cold water is a feeling I will continue to chase for many years to come.

I’ve realised that my experience of using it as a relief from depression is clearly one shared by many.