A bubbling ocean carbon dioxide hotspot has been discovered 200 feet below the surface by divers while they were studying how groundwater from a nearby island could affect the ocean environment of the Verde Island Passage in the Philippines.

The site offers a good setting to study marine life that thrives in high levels of carbon dioxide. It is linked to a nearby volcano that vents out the gases through cracks in the ocean floor and has probably been doing so for decades or even millennia.

“These high carbon dioxide environments that are actually close to thriving reefs, how does it work?” said Bayani Cardenas, a hydrologist and professor in the Jackson School of Geosciences at UT Austin. “Life is still thriving there, but perhaps not the kind that we are used to. They need to be studied.”

Dubbed ‘Soda Streams’ by Cardenas, the area was discovered while he was researching whether groundwater from the nearby land could be discharging into the submarine ocean environment, which is a phenomenon that is generally ignored by scientists looking at the water cycle.

“It’s an unseen flux of water from land to the ocean,” Cardenas said. “And it’s hard to quantify. It’s not like a river where you have a delta and you can measure it.”

The scientists measured the ocean carbon dioxide concentrations as high as 95,000 parts per million (ppm), more than 200 times the concentration of carbon dioxide found in the atmosphere. The readings range from 60,000 to 95,000 and are potentially the highest ever recorded in nature. The carbon dioxide levels fall quickly away from the seeps as the gas is diluted in the ocean, but the gas still creates an elevated carbon dioxide environment along the rest of the coastline of the Calumpan Peninsula, with levels in the 400 to 600 ppm range. 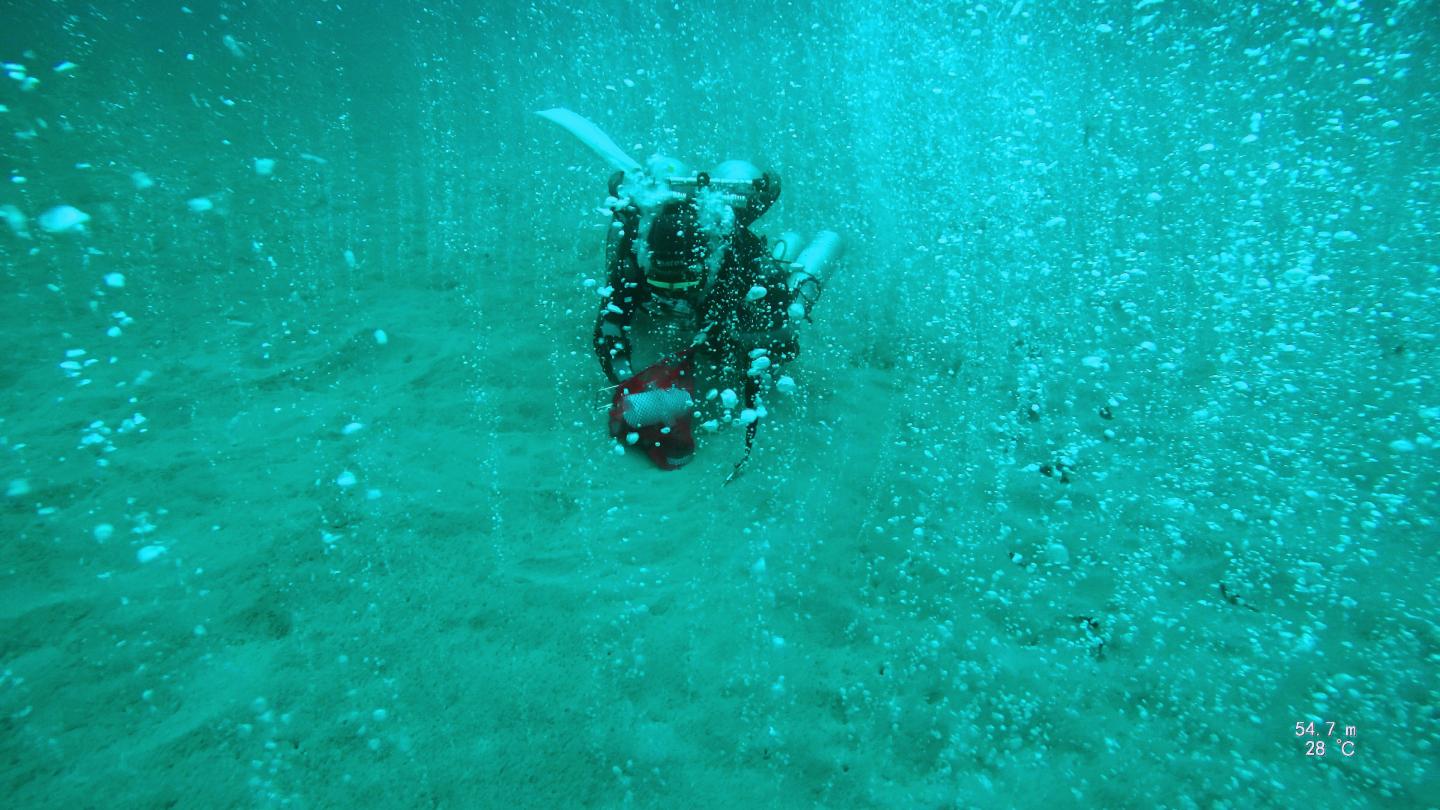 “Underwater fieldwork is 10 times harder than above water, as I have also recently found out during a diving campaign in the Caribbean,” said  Elco Luijendijk, a lecturer at the University of Göttingen in Germany who reviewed the study for the journal. “Even simple measurements and collecting samples require a lot of care, let alone measurement of radon isotopes, which even onshore is tricky. This [study] really widens our knowledge on what happens in these environments and has shown that these vents can change seawater chemistry over large areas.”

Training in deep diving has been a key element in Cardenas’ research, as it has allowed him to open up a portion of the ocean that is rarely studied. “It’s really a big part of the ocean that is left unexplored because it’s too shallow for remotely operated vehicles and is too deep for regular divers,” he said.

In addition to the ocean carbon dioxide bubbles, the team also found hotspots in the sea floor where groundwater was being discharged into the ocean. This highlights the connection between groundwater and the ocean, meaning that there is a pathway for pollutants from the island to end up on the reefs.

According to Cardenas, this is particularly important knowledge for a place like the Philippines, where coastal development is booming largely because of tourism driven by the nearby reefs. However, the resident communities often rely on septic tanks instead of modernised sewage systems. Ultimately, the coastal development could drive pollution out to the very reef system the economy relies on.

To read the full paper, ‘Submarine Groundwater and Vent Discharge in a Volcanic Area Associated With Coastal Acidification’, click here.