A whale that was transported into Portsmouth Harbour lodged on the bow of a large cargo ship died as a result of being hit by the vessel, experts have said.

A UK Cetecean Strandings Investigation Programme (CSIP) team from the Zoological Society of London (ZSL) carried out a field examination of a whale brought into Portsmouth on 30th December, by a cargo vessel that had transited from Africa. The 17 metre fn whale had to be lifted off by crane for it being examined.

This was the third fin whale reported to the CSIP during 2019 – approximately three fin whales are reported each year in the UK. 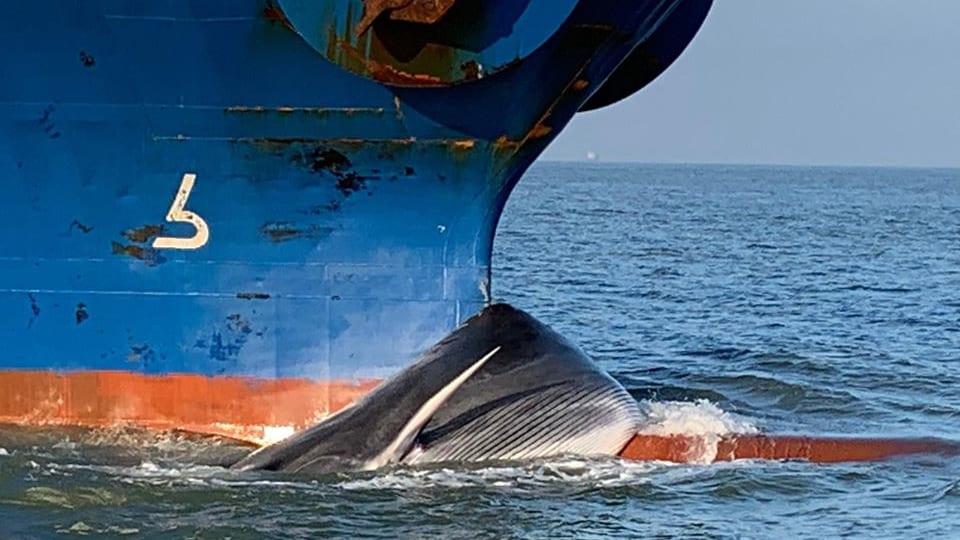 The CSIP said that the whale showed signs of recent feeding and no affects of disease, adding that its injuries were consistent with being hit while alive.

“The team found that it was a 17.1m juvenile male fin whale in apparently good nutritional condition, with well-developed muscle mass and blubber deposits,” CSIP wrote on Facebook. “The team found evidence of recent feeding, but no gross evidence of disease or discernible parasite burden. An extensive area of haemorrhage and oedema within the peritoneal wall and also over the thoracic region was consistent with the whale being struck by the vessel whilst alive and ship-strike is considered to be the most probable proximal cause of death.”

A pilot boat spotted the dead whale on the Cote d’Ivoirian Star in the Solent on 30 December. The Liberian-registered vessel had been travelling from Senegal when the whale was noticed on its approach to Portsmouth.

It said the data would be passed on to a global initiative run by the International Whaling Commission, in an effort to learn more about the issue of whales being struck by ships.