Giant barrel jellyfish caught on camera off coast of England

The pair were diving off the coast of Falmouth in Cornwall filming for #WildOceanWeek, during which Daly circumnavigated the UK to document and share her encounters with some of Great Britain’s more extraordinary marine life. 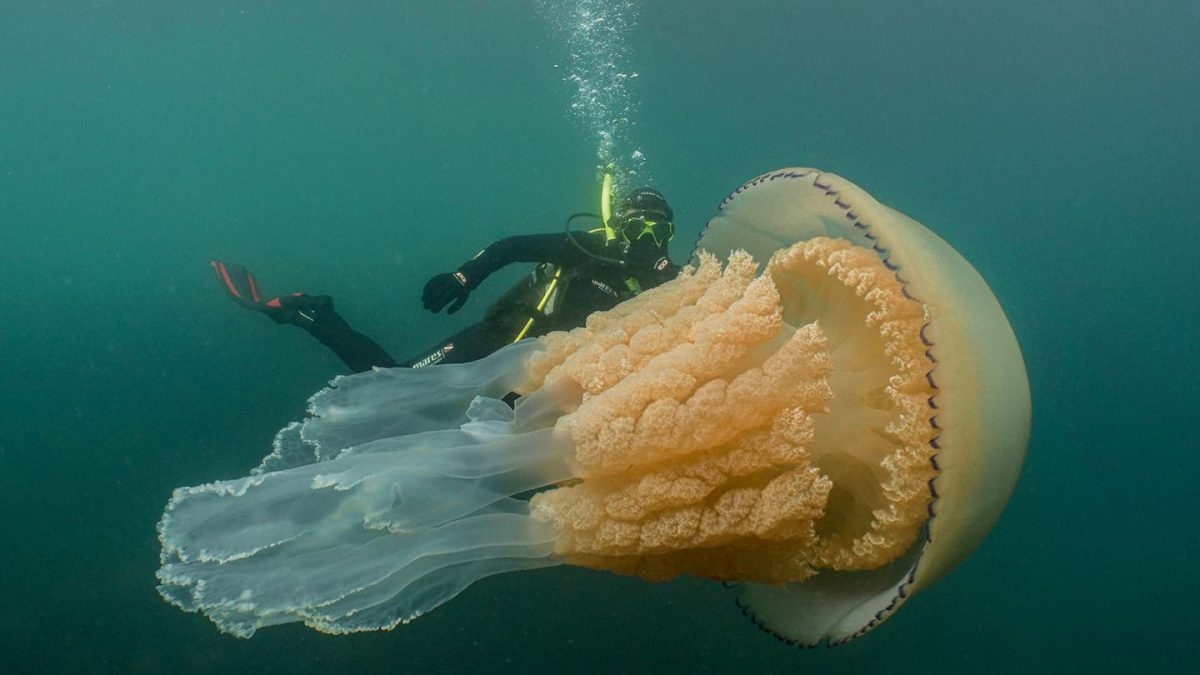 The barrel jellyfish, which is pretty common off the southern and western coasts of the UK in the summer, appeared in murky waters at a depth of around two metres. They tend to grow up to around 90cm in length with a weight of up to 35kg, though they have been known to reach dustbin lid-sized, according to The Wildlife Trusts.

Abbott said that the jellyfish was approximately 1.5 metres long and the same size as Daly. They swam with the creature for around an hour before heading back to the surface.

“It really humbles you to be alongside an animal that size. It’s an experience we’ll never forget,” said Daly. “Their appearance is quite distinctive. They’re not a threat to humans. They have a mild sting, but wouldn’t cause damage to humans.”

Daly suggested that the warming oceans, which leads to larger plankton populations, could be behind why they spotted the jellyfish in this location. “We’re starting to get a better idea of how these jellyfish live and their ecology and to see that so close on the coast was incredible. We need to think about how that jellyfish could possibly benefit at the food chain,” she told Sky News. “Off the coast of Cornwall you get leatherback turtles this time of year and jellyfish are a perfect food source – so it’s all part of a really important ecosystem really and to see them here – we should absolutely appreciate that.”

The duo, who have tracked a huge array of UK marine life from orcas hunting seals in Shetland to bottlenose dolphins in Wales, wrapped up their seven-day tour of Britain by clearing 8.5kg of rubbish from Maenporth Beach, Falmouth. Money raised from Wild Ocean Week will go towards the Marine Conservation Society. They captured hours and hours of footage, which were condensed into bitesized videos that were posted on Daly’s Facebook page.

“We wanted Wild Ocean Week to show that you don’t need to go abroad to experience the richness of marine life – there’s so much right here,” Abbott explained. “Firstly, we wanted to show how amazing sea life in the UK actually is, secondly we wanted to raise awareness of the importance of marine conservation.”