For the first time a humpback spotted in UK waters has also been sighted in the Arctic.

Volunteers involved in the study used photography shared on social media to track the travel history of a humpback whale – named vYking by resident whale watchers – who spent last winter in the waters of Firth of Forth, near Edinburgh and Fife in Scotland.

This area of Scotland is fast becoming a winter hotspot for humpback whales and sightings of these marine giants in the seas surrounding the UK are increasing. This project suggests that some humpbacks are using UK waters as a ‘service station’ on their long migration from Arctic feeding grounds to their tropical breeding spots. Using the data collected by the Forth Marine Mammals Facebook group and the unique markings on the underside of vYking’s fluke, the authors worked together with the local community to track the whale’s movements.

“This research shows that UK seas play an important role in the migrations of some humpback whales and demonstrates the need for effective conservation of our marine environment, said Daniel Moore, co-lead author of the study. “We hope to continue our research in order to understand more about these movements and the importance of UK waters in contributing to successful migrations.” 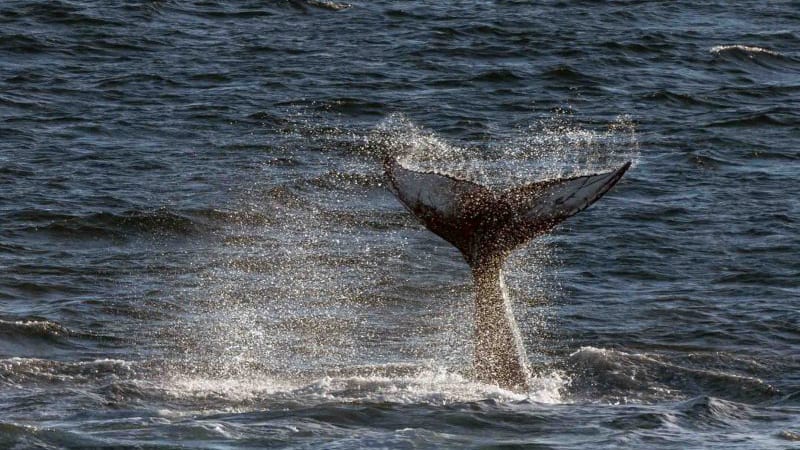 “Until 2017, humpback whales had only been recorded a handful of times in the Firth of Forth over the past century – now we’re seeing them every winter on an almost daily basis,” added Emily Cunningham, one of the marine biologists who led the study.

VYking is one of four humpbacks that was spotted regularly in Scotland’s Firth of Forth last winter. When scientific catalogues were found to not contain any record of the whale, researchers turned to social media, where they found a shot of vYking from the previous summer, shot 1,600 miles away in Svalbard.

“Well done to the volunteers with the Forth Marine Mammal Group, whose dedication to getting good photos has contributed to this exciting confirmation that recent winter humpback sightings in the Firth of Forth can be linked to feeding grounds off Svalbard in Northern Norway,” said Calum Duncan, Head of Conservation Scotland for the Marine Conservation Society. “Whether these increased sightings are a result of the population bouncing back from historic exploitation, a shift in the pattern of their tropical to sub-arctic and back migration routes, or a combination of both, our waters are clearly of increasing importance to these magnificent animals. Any marine planning, licensing and conservation measures for the Firth of Forth and Scotland’s wider seas should ensure they are properly protected when visiting in winter.”

For more information on these findings, the study “Sudden seasonal occurrence of humpback whales Megaptera novaeangliae in the Firth of Forth, Scotland and first confirmed movement between high-latitude feeding grounds and United Kingdom waters”, co-authored by Katie E. O’Neil, Emily G. Cunningham and Daniel M. Moore, is available to read online here.