New research has found that filter-feeder megafauna accidentally consume thousands of cubic metres of plankton-filled water every day in Indonesia. However, tiny plastic pieces from broken down carrier bags and single-use packaging are in high concentration in the chosen feeding grounds of reef manta rays and whale sharks.

Marine megafauna are globally threatened species facing extreme pressures from overfishing. They are often caught incidentally in nets or become entangled in fishing lines. Nearly half of the mobulid rays, two thirds of filter-feeder sharks and more than one quarter of baleen whales are listed by the IUCN as globally threatened species and are prioritised for conservation.

“With time, plastics break down into smaller pieces called microplastics that large marine filter-feeders might accidentally scoop up because they float among their prey,” said lead author Elitza Germanov, a researcher at the Marine Megafauna Foundation (MMF) and PhD candidate at Murdoch University. 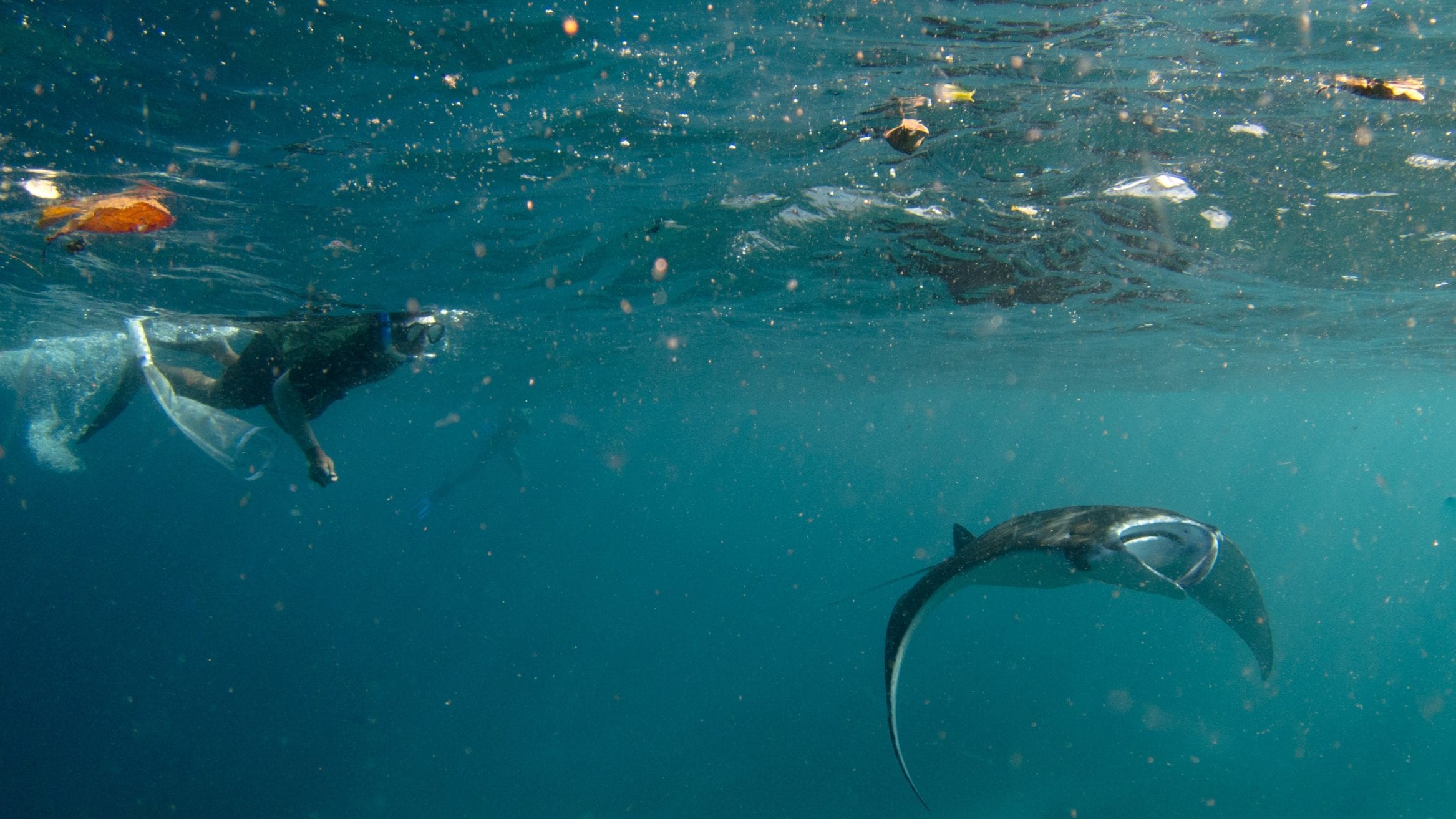 Resident and migratory filter-feeders are ingesting these microplastics both directly and indirectly, from polluted water and through the contaminated plankton they feed on respectively. Manta rays and whale sharks spend much of their time in inshore surface water feeding grounds, where marine litter often aggregates. The research team used a plankton net to trawl for microplastics in the top 50cm of the water column. Additionally, they documented any debris visible at the surface from the vessel.

“It is difficult to assess how much plastic manta rays and whale sharks actually ingest because conventional methods used to study animal diets, such as stomach analysis, are unsuitable for threatened species like these,” said Neil Loneragan, Professor of Marine Ecology and Conservation at Murdoch University.

The study, a collaboration between marine biologists from the MMF, Murdoch University and Udayana University, discovered that whale sharks, which seasonally aggregate in Java, could be ingesting up to 137 pieces per hour. Reef manta rays may ingest up to 63 pieces of plastic per hour of feeding in Nusa Penida and Komodo National Park. 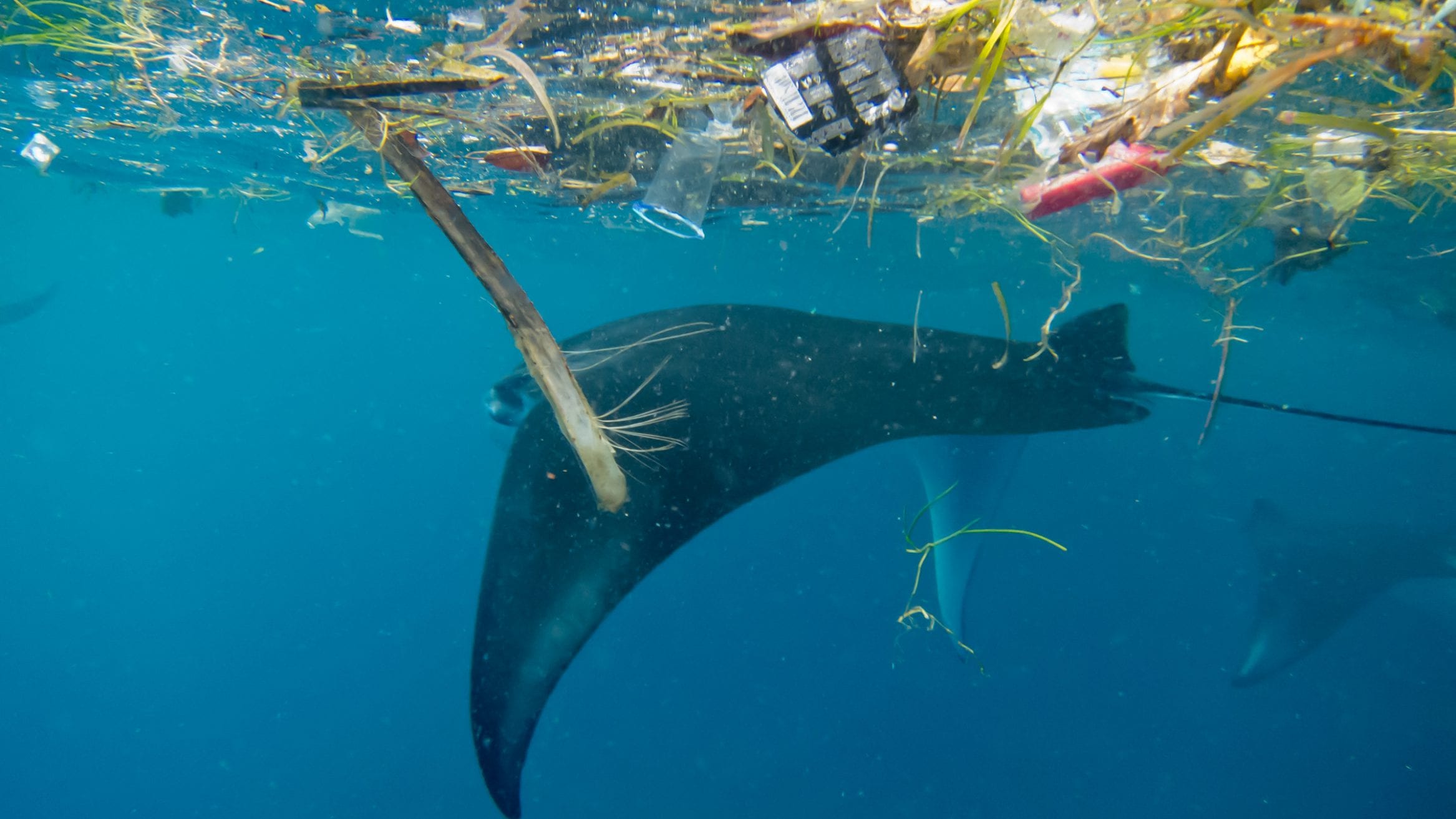 Of all the plastic pieces recorded, approximately 80% were small pieces of less than 5mm, so-called microplastics. Thin and bendable films from single-use bags and wrappers as well as hard fragments were the most prevalent plastics (more than 50% combined).

“We now know that, through exposure to toxic substances, plastic contamination has the potential to further reduce the population numbers of these threatened animals because they reproduce slowly and have few offspring throughout their lives,” added Germanov.

Indonesia is currently ranked as the second worst plastic polluter in the world and many of its neighbouring nations are among the top ten. This study found that plastic abundance was up to 44 times higher during the rainy season. Plastic production is projected to increase globally.

The MMF has stated that future research should focus on coastal regions where pollution overlaps with the critical feeding and breeding grounds of these ocean giants.